Through the eyes of friends...

Our style of full-timing is that we are "on the go" 365.  We travel all year long.  We stop for a few days, a week or two at the most, depending on what there is to see and do.  We don't "winter" or "summer" at any given campground anywhere.  That said, we haven't set down roots of any kind (yet), and the friends we've made, have been either the ones we had before we started this lifestyle, or ones we've made along the way.

Being nomads of sorts, we seldom get "company", so when we do, it's a real treat!  This past week, some dear friends of ours that still live in a sticks & bricks house in Denver, but have the same model RV as ours and venture out camping from time to time, joined us in Albuquerque for a few days.

We had spent some time there this past April, and Rich used to come here quite a bit for work about ten years ago, and Deb had been, but not the surrounding area so much.  We all like this area, was familiar with most of it, but still had some areas that some of us hadn't seen yet, so it would be fun to show each other our "finds".

The first day's adventure was to Socorro to show Deb the Very Large Array.  Rich used to come out this way for work quite often, so he was quite fond of the area.  In our last visit, we had found a great restaurant that we wanted to share with them as well.  When we got to the small town of Socorro, we had one hit and one miss...our restaurant, the Socorro Springs Brewing Co, the lunch didn't disappoint, it still was great, but a (great) nut & jerky place that Rich used to love going to, wasn't there any longer (and no one in town knew what happened to it), so he was greatly disappointed.

We did get to see one new thing in town though, which was fun for us, and that was the inside of the San Miguel Mission.  It was closed when we were here last time, so it was nice to see how beautiful the inside is. 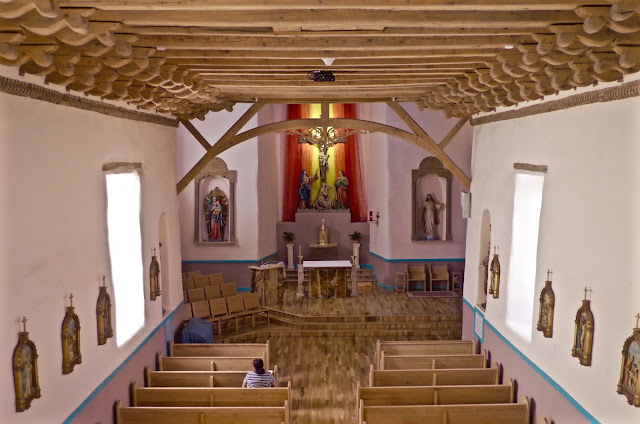 Rich, knowing the area, drove us on into  Magdalena and all around it, giving me the opportunity to get some really fun pictures!  We even drove out to their old cemetery!  We tried getting to "Riley" which, per their posted sign, is now a ghost town 30 miles away, but the road pretty much just petered out, oh well, we gave it a good try! 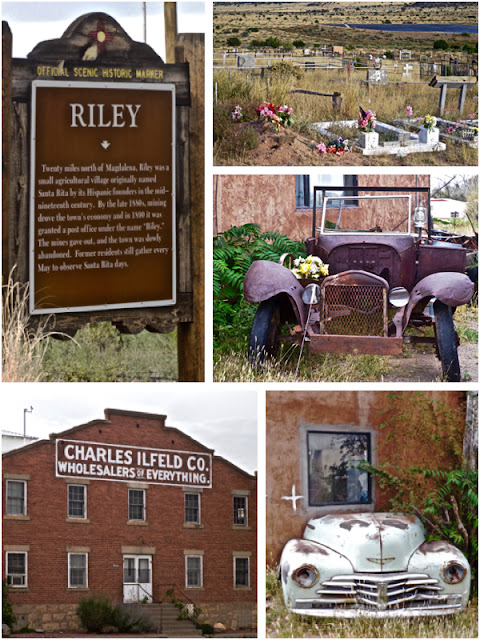 As we drove over to the VLA, range cows and antelope came out to greet us.  Deb had never been out there, so it was fun to show her just how big those things really are! 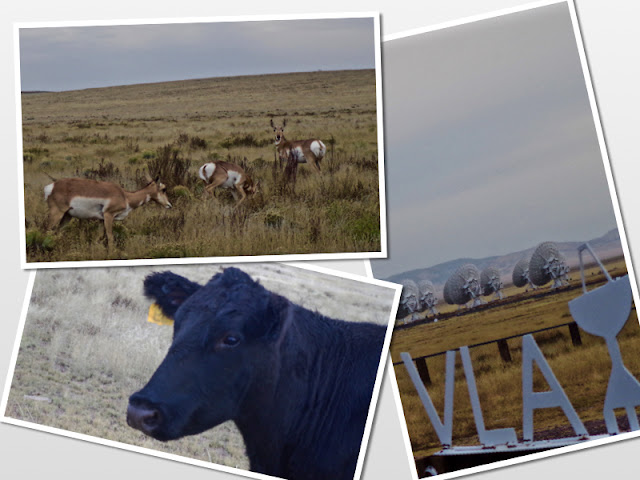 The following day our goal was to head to the tiny town of Cerrillos!  Deb's son-in-law had a relative who had come from there and still had someone who was living there!  It's one of the town's along the "Turquoise Trail".  We had been to Madrid, which is also along this trail and a really fun town, so would be fun to show them and stop there for lunch.

Cerrillos was a hoot!  "Tiny" it is!  It's true"claim to fame" is it's beautiful and unusual turquoise.  It's a really pretty greenish color that's mined here, and at one time it and gold & silver were heavily mined in these hills.  Now, it's pretty much just this pretty turquoise.  The other thing the town's been used for is several movies have been filmed here including Young Guns.  It also had a pretty interesting Turquoise Mining Museum that had all sorts of things!  While we were there, a group of YPO (Young Presidents Association) folks were having a scavenger hunt, and showed up.  It brought back some fun memories, as I used to handle those groups in my "old event coordinator days"! 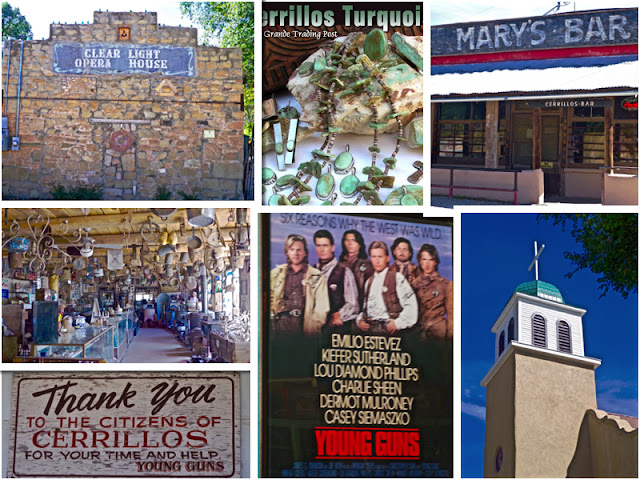 Deb & Rich did indeed catch up with "relatives" at Mary's Bar, took lots of pictures, and then we were off to Madrid!  As usual, we had a great lunch at The Hollar while we listened to the band Cactus Slim play for us! 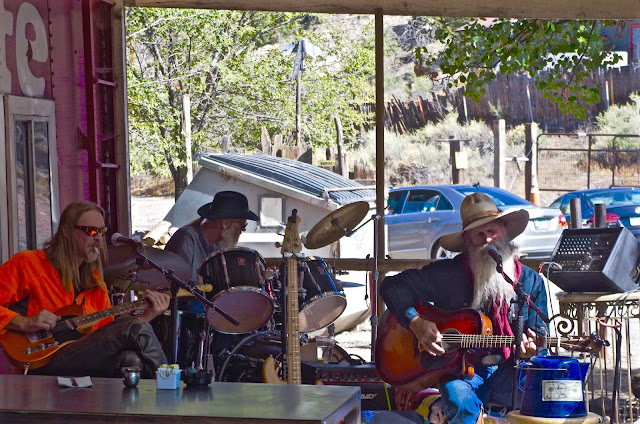 As usual, we found some "goodies" we couldn't pass up, as there is always something really special in this art-filled town!

It is so much fun, seeing places you've been before, through the eyes of friends!  To soon our friends were on their way back home...and we are off on yet another unknown adventure!

...On the road to Washington,  Marie

Barbecue, Blues and Barges!  One of the perks of being on the road full time like we are, is that after awhile you end up circling around again and the next thing you know, your rig just somehow finds it's way to some of your most favorite spots again!  That happened to us this week when we decided to take a different route to Texas this time, we just seemed to find our way going right through the heart of Memphis TN...one of our most favorite stops!  And the time of day, well, heck just right when we needed to spend the night, well two actually, since it had been a long drive and we needed a break, right?  So, where else to stay, but at our favorite resting stop, Tom Sawyer's RV Park of course!

So, en route there, I give them a quick call...can you believe it, they were almost full and I had to practically beg for a site along the river?  Yikes!  Seems "rally folks" have caught on that this is a great place and have taken over, one group after another!  Dang!  Anyway, she gave us a site that they normally save for the big 5th wheels, that actually turned out to be the best one there!  A clear shot straight at the river, yea for us!  Now, this place is not fancy by any means, and not for everyone, but we just love it here.  It's just a bunch of sites all along the Mississippi River,  but quiet and peaceful and best of all you get to sit and watch barges being pushed up and down the river by big ole' tug boats all day long!  The sun shines, the breeze blows, there's nice grass & space between each site...it just makes me smile. 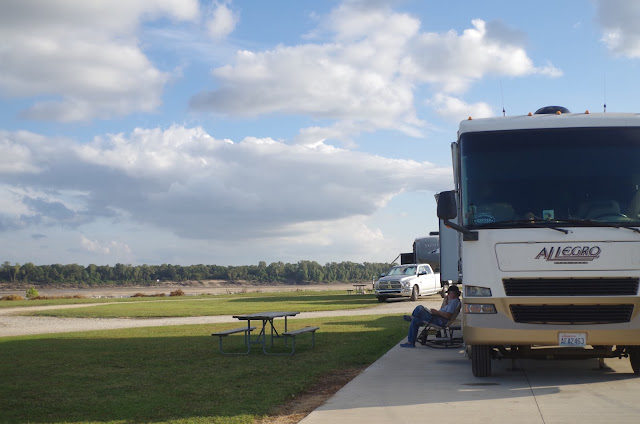 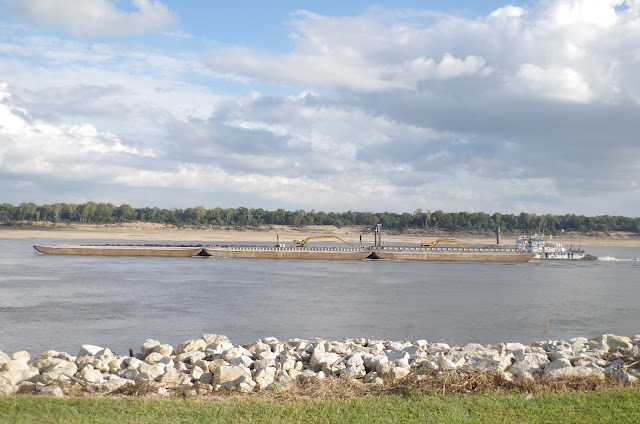 Then, the very best part is...Memphis and Beale Street is only 20 minutes away!  And that means barbecue!  Not just any barbecue, but the best barbecue we've found across the country...and trust me, I've eaten more than my share of ribs from California to Maine and this small cafe on the corner of Beale St has the best ones going!  It's called Blues City Cafe and all they really serve are ribs & catfish and the stuff that goes with them.  It's all good.  The meat falls off the bones, there's just enough sauce to give it flavor without drowning them, and for us, a half rack leaves your tummy so full (along with the beans, coleslaw & fries) that your moaning when you leave.  I start missing them the minute I leave, knowing it will be a long time again that my mouth will have such a treat again... 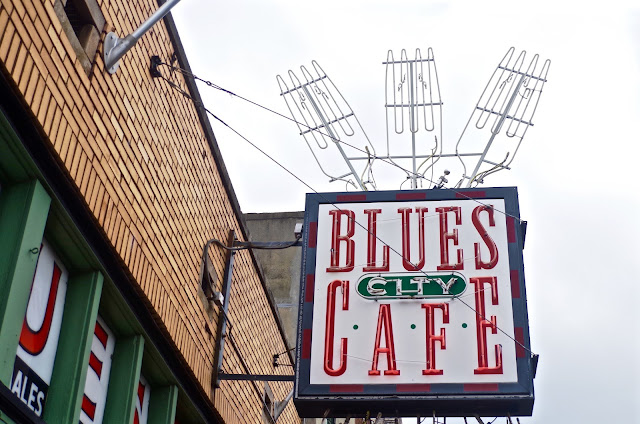 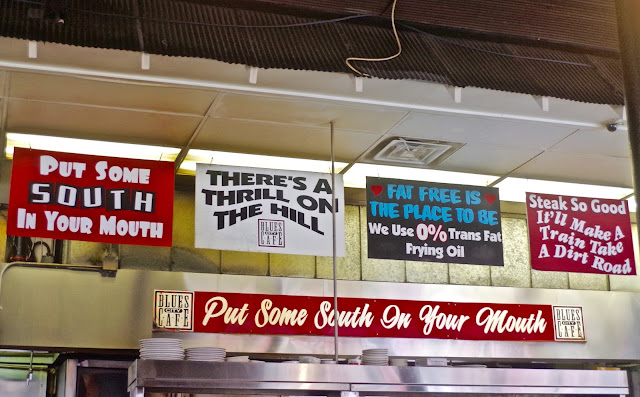 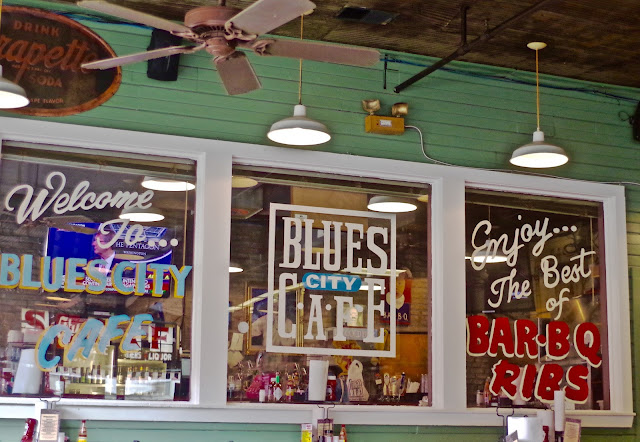 As we walk down Beale Street, blues eeks out from several of the restaurants, and you hear it as well when you go into some of the stores, it's it soul here...you can just feel it. 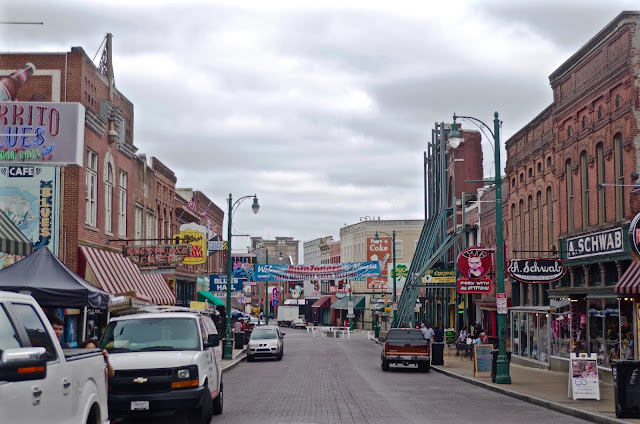 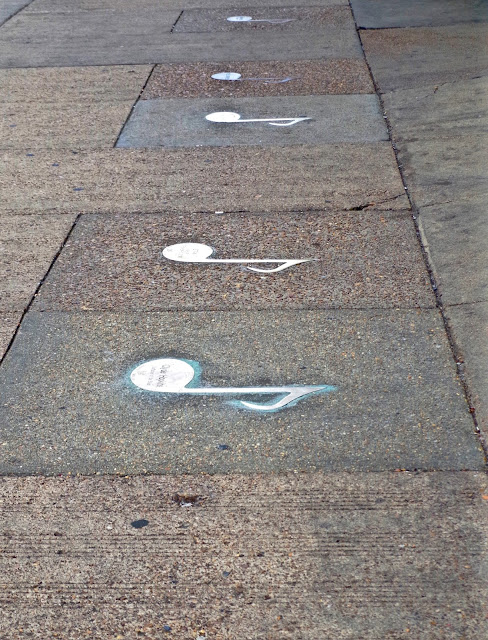 To soon we had to leave...but we'll be back, our rig knows the way!