Where does the time go?  Being "stationary", it seems like time flies faster than when we are "on the road"!  Last blog, we just got back from Hawaii, and now, here we are at the end of December already!  What have we been doing? 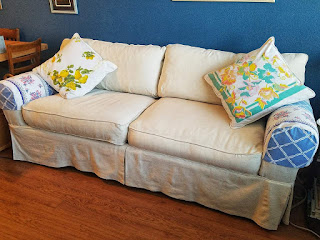 After we painted the wall, and hung some of the art, it was time to "update" our couch.  It just didn't fit in with our new look!  I wanted it to be a plain (off) white.  I've gotten into Pinterest lately, so turned to it, and found a number of blogs on how to reupholster using cotton drop cloths.  Sounded easy enough.  So, two drop cloths, a bunch of Velcro, seam binding, and two weeks later...a "new couch"!   I have a love of 1950's tablecloths, and have collected a number of them to use in sewing projects.  I used several for the arm rests and pillows (reversible), and will again on seat cushions for my dining chairs when I tackle that project (soon).  It's not perfect, but we like it, and it beats spending hundreds of dollars on a new couch!  ;-)

Thanksgiving brought my older sister Bette out to visit us for a week.  What a treat that was to have her here, even if only for a short time.  We invited another couple to join us for our very small feast and had a lovely Thanksgiving for our first one in our new tiny home.  I was so busy being the hostess, I forgot to take pictures!  But the day was lovely and we all had a great time!

She and I went flower and plant shopping and had a ball!  She loves plants as much as I do, so I was saving that trip for when she was here.  I have a ton of pots & containers that needed filling, so, off we went to the store to gather up soil and various goodies to fill them.  Oh what fun we had!  Ran out of money before we ran out of ideas...

The week went by way to fast, the sun was shining brightly and each day I took her out and showed her our great park and tried to entice her to move here from rainy, cloudy, cold Washington...hee hee.. 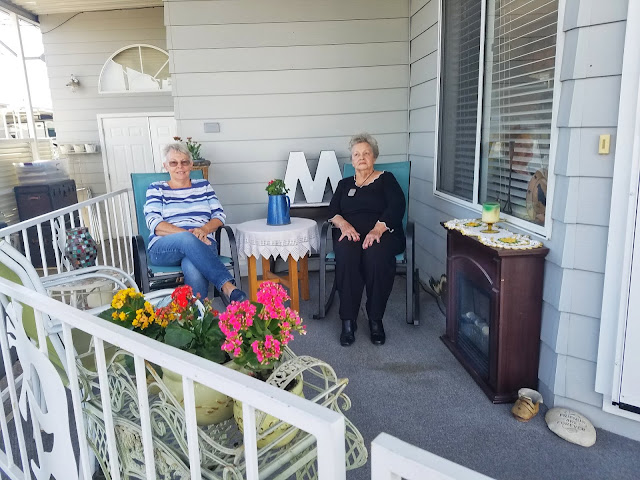 December brought the chance to sell some of our stuff!  Twice a year Happy Trails has a Yard Sale!  So...we drug out all our goodies and did our best to sell, sell, sell!  Well, I think the Goodwill did better than we did!  We did manage to sell some (about $100 worth) but not as much as I sure would have liked, but, what we didn't, we mostly hauled off.  My friend Delores has introduced me to "Swip Swap" and others, it's an online selling app that I've been pretty successful with.  I only use it for the larger pieces, as it's not worth it for me to to take pictures and then meet up with someone for items less than $25 (in my opinion).  I've sold about half my items this way...sure wish the other half would go, as I need the space!!  ;-)   It's fun though and you get to meet some nice folks too.  I've also held on to the cloths I'm selling as we have a big clothing sale in January and I'll give that a try next.  What the heck?  Right? 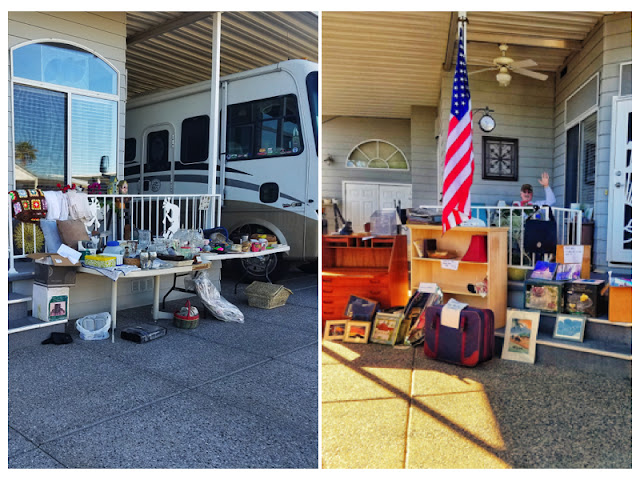 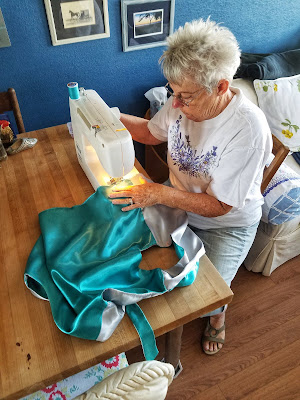 Did I tell you I joined the Theater Group here?  Well, we've started getting ready for the 2019 production.  The theme for it is "Starry, Starry, Night".  I'm in 4 spots.  At our holiday party, our costume designer was talking with each of us, then was asking around if anyone knew how to sew?  Of course my hand went up...next thing I know, I'm helping with reversible satin, 2 color vests!  Oh boy!  As my daughter laughingly reminded me, I have a tendency to "jump right in" and then the next thing I know is I'm in charge!  Oops!
Told her, "Oh no, not this time, I don't know enough about this stuff to ever be in charge, no thank you!"

We've still been working on projects.  The latest is my craft chest.  I inherited my Mother's amour.  She had it for many years, and I've had it for about 50 years.  It was a nice cedar one, but it's been kicked around from house to house and suffered a lot of heat and cold and abuse, and showed it.  It needed a lot of repair work.  Jack always was ready to get rid of it, but it's the only thing I have of hers.  I asked him to fix it, and to put shelves inside and thus, turn it into a craft chest for me.  He did a great job.  I then sanded the whole thing and then painted the outside and voila!  New craft chest!   I was then able to unload two very large boxes into the chest.  Now I can see, and get to all my wonderful crafts easily and joyfully!  Yea!  The only thing left is I want to decoupage a design on the front.  I just haven't found the right one yet. 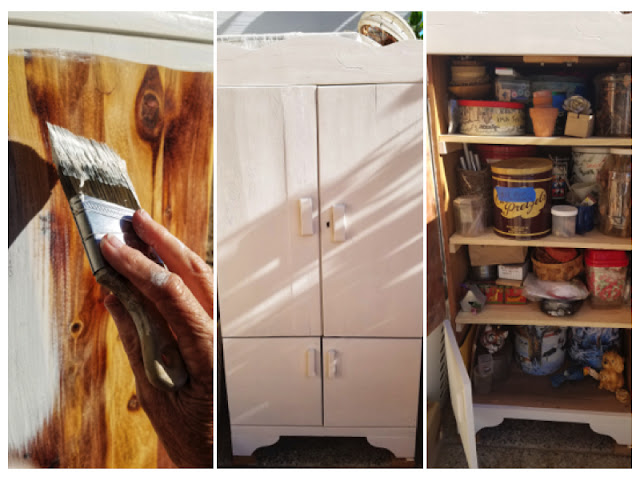 Being "alone" this year, it hasn't felt much like Christmas to me, but we did do one thing that was very special.  Our friends told us about a Christmas show called the Celebration of Christmas done at a church in Phoenix.  It has flying angels, live animals, singing, great costumes, etc.  I had shared that I had always wanted to go to the one in Garden Grove CA at the Crystal Cathedral and never made it (and now it's gone).  So, they organized a small group of us, and got tickets and we all went there and then afterwards all went to dinner.  What a great night and wonderful show!  The theme is, people are stuck at the airport on Christmas Eve, with all the flights cancelled due to weather...and various stories with various couples...ending of course with the story of Christmas.  Just beautiful. 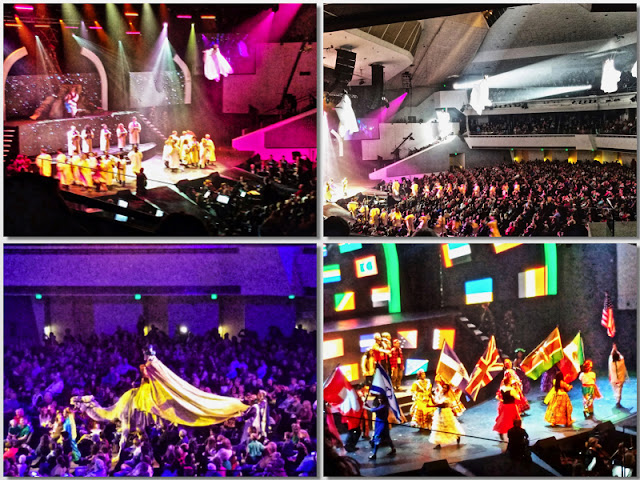 We finally did put up a couple of decorations outside.  That's it for this year though, we will do more next year.  2019 will be a better year, for us and for everyone!  Cheers!

Marie
Posted by Marie No comments: