Well, they say "after three days fish and family begin to smell"...I wonder what one says about two weeks?  We camped alongside my niece's home in "exchange" for cooking a few meals...pretty good deal, and the company was nice too!  ;-)  Being Tacoma, the weather wasn't half bad either (most of the time).  The rain pretty much kept to the evenings, and gave us mild sun during the days.  We spent most of our time seeing doctors, catching up with family and helping out my nieces finish up my sister's place.  They are all still struggling with her passing last month and I was here to see if I could help in any way.  I mostly listened...and hugged.  Loosing a sister is tough, but loosing a mom is tougher...no matter what age you are.

It was finally time to go, and head on back to Arizona.  Our plan was to spend a couple of days camping at Mt. Rainer...if the weather cooperated, that is.  We've never been able to do it before because we've always been here in the dead of winter, but since it was only September, there was a slight chance it might not be raining (at least for a couple of days), we thought we would chance it, so off we went!

Well, the gods weren't with us...the sun was out when we left, but the closer we got, the worse it got, and by the time we got to the mountain, ugh.  Rain, rain, rain!  So, we kept right on going...until we ended up in Baker City OR.  It turned out to be quite a cute little town with some interesting things to see...so we extended our stay!

Baker City has a great historical downtown with some wonderful old buildings (they even have a visitor's brochure for you), but my favorite was their 1940 theater. 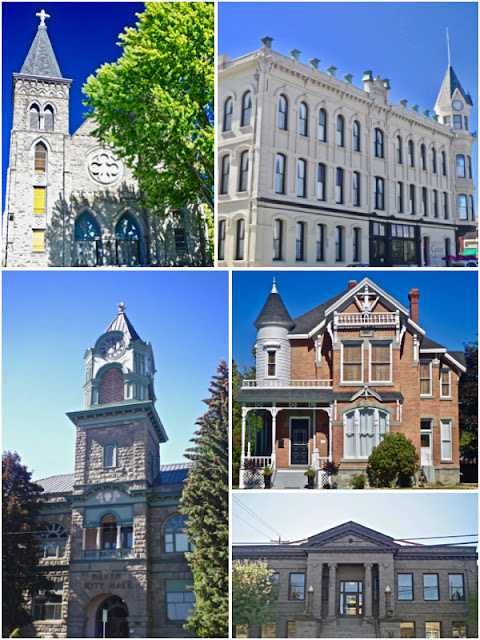 Everyone there kept telling us about their Oregon Trail Interpretive Center, and what a "must see" it was to visit...so, we did!  They were right...a super great museum, and outside even had an actual piece of the ruts left from the trail itself.  Very cool.

We have all heard so much about the Oregon Trail, with so many movies, art, and our travels, etc. but a lot of it wasn't like that.  For instance...

*  They didn't travel in a long line like we've seen in pictures & in the movies, they traveled across from each other or bunched up because they didn't want to breath each other's dust (makes sense)
*  They didn't all ride in the wagons, the women and children, etc walked the whole way.  The only ones "riding" were the ones driving the wagon.  The wagons were full of provisions, and very uncomfortable too
*  Horses didn't pull the wagons, they were mostly pulled by oxen or mules because of the weight
*  The wagons didn't have springs in them, they were special built prairie schoone wagons
*  Not all Indian situations were bad.  Early emigrants were grateful for the cooperation and generosity of the Indians they met on the Trail.  They were guides and were strong swimmers who herded frightened cattle and horses across rivers and were willing to trade salmon, vegetables and fruit for stock, clothing, tools and utensils.  Many more emigrants would have died on the Trail if not for the Tribe's help

I often wondered "why?" and "what possessed these people to travel almost 2000 miles to a place they had never really seen?"  The museum answered it for me...

"Oregon fever" struck in hundreds of ways - emigrants moved away from home and hearth for different reasons.  A national depression, falling crop prices, and disease-ridden city environment encouraged some.  Others, running from debt, or from the local sheriff.  Still others hoped for good farming, or as one character put it, "Just to get where I ain't".  Most who came West were farmers, with them came merchants, preachers, and eventually the military.  Women and children followed ambitious men, waving farewells to families and friends left behind.    Many imagined Oregon as rich, well-watered paradise, with good soil, few bugs and fewer people.

All I can say, is that these were some strong, brave folks.  To endure what they did, for six long months, is far more than most of us do in a life time.  Pretty amazing... The Oregon Trail is more than just an old dirt road.  It represents the hopes and dreams of a growing nation, individuals and groups, heartache and hardship, lasting friendships and new homes.  It symbolizes a tradition of movement and change, the willingness to start over, and the search for opportunity.  It also represents less heroic elements of the emigrant movement, such as the irreversible cultural and social changes brought as Native peoples were pushed off their homelands.

Baker City is also surrounded by historic ghost towns, so we took an afternoon drive out to the country to see "what we could see"!  The only one that had much left was the
mining town of Sumpter.

As you drive into the Sumpter Valley, you see piles & piles of gravel...everywhere!  We later found out they are called "tailings" - refuse left behind by people's quest for gold....and one of the tools used to dig up the valley floor is the Sumpter Valley Dredge State Heritage Park's centerpiece - a monument to human ingenuity surrounded by the restorative wonders of nature.  The tool used to plow up most of what was once pasture and open meadows along the Powder River is a five-story vessel known as the Sumpter Valley Dredge.  Wider than a large riverboat, the dredge is now grounded where it stopped operating in 1954.  It is one of the nation's oldest surviving gold-digging dredge, weighing 1240 tons with a 52' wide hull.

It managed to navigate the Sumpter Valley in a pond of its own creation, scooping up its 72 buckets (each weighing one ton) at the rate of 280,000 cubic yards per month.  In 41 years, Sumpter Valley Dredge works extracted $4.5 million in gold. The town was kind of cute too, with it's old buildings and history.  We even got a great glimpse of an eagle as we drove out of town on our way home!  All in all, it was a fun visit! Well, we are back "home" again in Arizona.  Trying to get things unpacked and turn this tiny house into a home...weeding through boxes and figuring out what treasures we keep and what we can part with...oh the joys of "downsizing" once again!  But, turning white walls into pretty blue ones, and seeing all our favorite art work once again displayed has it's upside!  It's nice to see our friends again and to be in the sunshine too!  We are looking forward to the activities here, and settling in a bit before our next "big trip" in the spring. 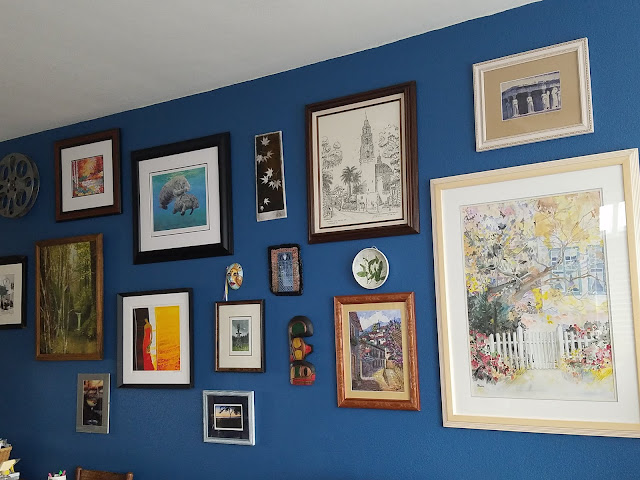 Until then, we have one "vacation" planned to Hawaii, then it will be quiet on the travel front for us for awhile...