It takes all kinds...

Every January we return to San Diego CA for a few weeks to visit friends and family.  We lived in the area for many years, and after we retired, almost five years ago now, we sold "everything" and bought our sweet home on wheels, and hit the road!  Without a 'sticks and bricks' abode, we camp in Mission Bay when we return.

San Diego proper has three campgrounds to choose from, kind of like a Goldilocks situation:  #1 Campland on the Bay - the most expensive; has all the bells & whistles with a restaurant, pool, clubhouse, store, planned actives, etc.  #2 Mission Bay RV Resort - next price down; still on the bay, but no bells & whistles, just a snack bar, and without all those "b & w", quieter.  #3 is Santa Fe Park RV Resort - the least expensive of the three and across the way, tucked into the hills, no bay view/traffic view instead (they do have a pool tho).  Probably less kids due to no bay (I'm guessing).  Like Goldilocks, it's whatever meets your needs (and pocketbook).

We don't have any kids (or grand kids with us) and in January, no need for a pool, etc. so  no need for all the bells & whistles, so Mission Bay RV Resort meets our needs just fine.  We like the view of the bay and seeing the sunset (when it graces us with one!) and the quietness of the park...usually.

Now, in these four plus years of constant travel (we don't season stay, we are 'on the move' all year long) we have camped at all kinds of parks and seen all kinds of people and all kinds of rigs.  People watching is part of the fun!  Getting to meet people, learning new things and ways to do things is part of the adventure.  But every now and then, you see someone or something that just makes you go hm mm...

On a walk around the campground one afternoon we came across what we considered a very ingenuous setup!  Someone had created a wonderful play area for their cats (or small dog) leading in & out of their rig through a small window through a series of screened tunnels into both shaded and sun areas.  Very nice and kind for the animals, and it looked fun too! 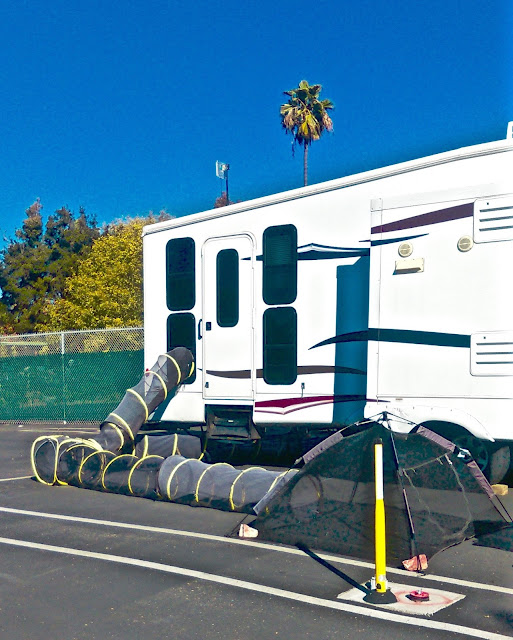 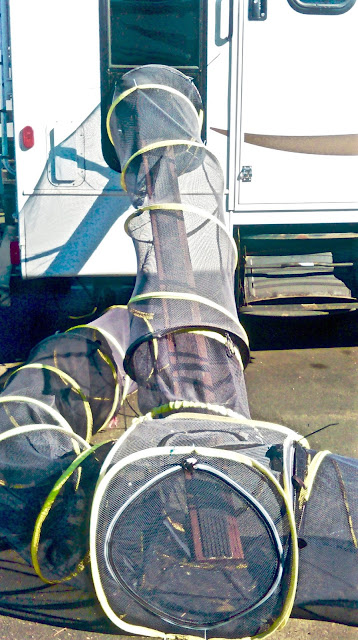 On the other hand, we experienced our first "clean-freak" (I'm not sure what else to call him).  You see, he evidently didn't like dirt, dust or leaves to settle around his rig, as twice a day he would get out his large leaf blower and blow off every little thing all around his rig, his car and his neighbor's area!  Ah, the wonderful sound of a leaf blower while you are enjoying camping...nothing quite like it!  ;-)  Now I understand that Mission Bay RV Resort with it's tarmac sites, and bay views might attract the non-camping-type camper, but that does seem a bit excessive... 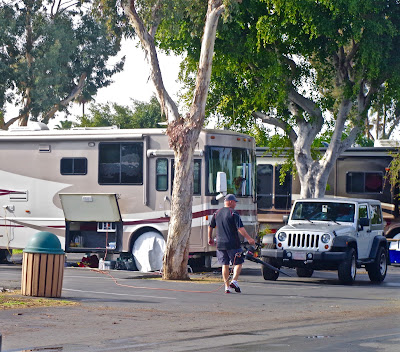 Oh well, it takes all kinds...  We were graced with a beautiful sunset before we left!  Thanks Mission Bay, we will be back again! 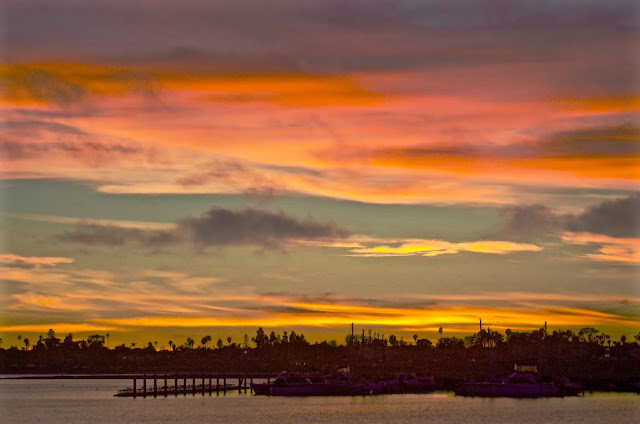 After what seemed like months of almost non-stop rain, a week of "the beach life" sure sounded like fun!  So, we continued our trek down Hwy 101, along the coast and pulled into Pismo Beach CA for a week.  It wasn't exactly full-bore sunshine, but it wasn't pouring down rain either...we'd take it!  60 degrees and the sun playing hide n' seek with the clouds was better than what we had been experiencing thus far!

One of the big draws in Pismo Beach is the Monarch Butterflies.  They come every year from late October through February and cluster in the limbs of the Eucalyptus and Monterey Pines in the area.  They travel over the Sierra Mountains and west of he Rockies, and some come from as far away as Canada to escape the colder temperatures of the north!  I was really excited to go see them, so that was the first thing on our list.  I was really expecting to see thousands fluttering around and the trees all golden from their clusters.  Well...it wasn't quite like that...We saw dozens flying very high above us, and we had to look into a telescope to see the clusters, which we could then, but only then.  The volunteers explained that it was still pretty cold for them - they like it well above 55 degrees, and it was still only hovering around 59-60, so they were keeping themselves pretty "closed up" for now.  They said their numbers (at best-guess count) was around 25,000.  I sure couldn't see how they did that from where I was standing, but guess they are better at it than I!  One of them took a picture for me through the telescope, not so great, but better than "nothing".  Sure not the "experience" I had been expecting, but, was fun anyway! 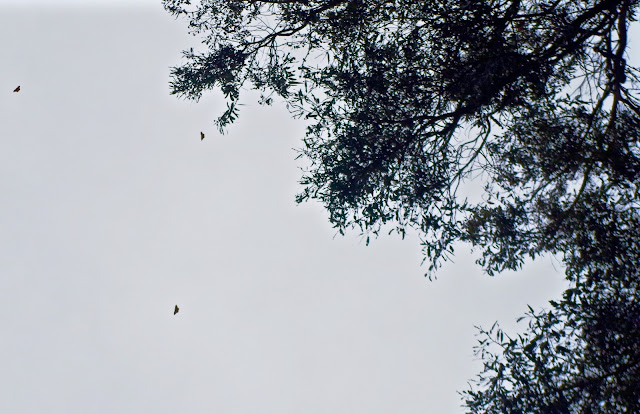 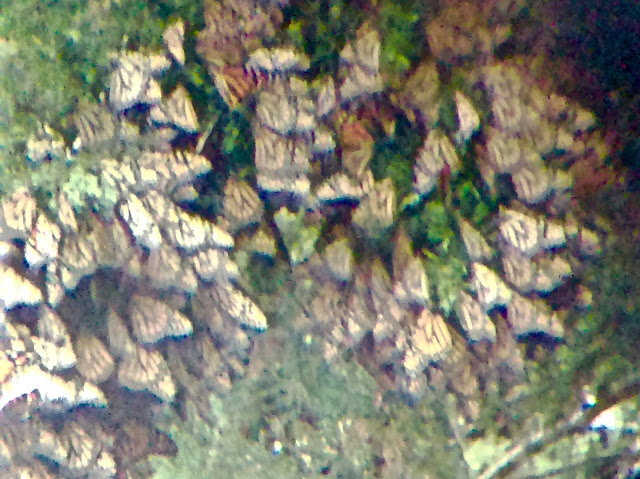 Our next adventure we thought we would try was to go out to the lighthouse in Avila Beach.  So, off we went!  Nice, long, long drive (why are so many, so far away and on long winding roads?)  Well, when we finally got to the beach, guess what?  You can only see it via a "tour" that only goes out on Wednesdays, by reservation...and, of course, it wasn't Wednesday!  Should of checked first...dang.  Oh well.  We had a nice walk along their pier and met some very cute seals sun bathing and even saw an adorable California sea otter swimming right next to us!  We had a delious lunch, then headed back again...as the rain started up once more. 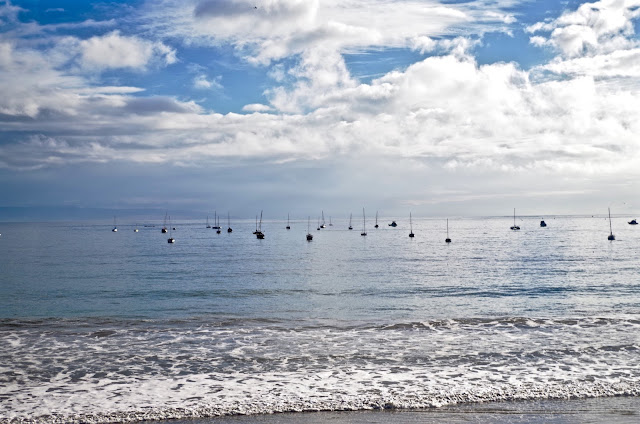 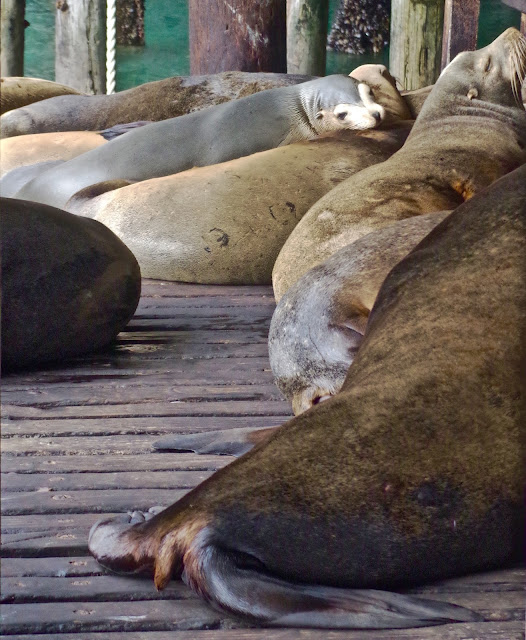 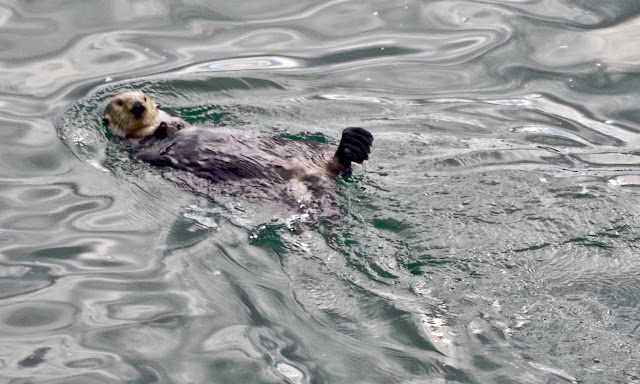 If you know anything at all about California, you know that Father Juniper Serra began a chain of Franciscan Missions all along the coast.  San Luis Obispo de Tolosa is the fifth, and one we hadn't seen yet.  Between the rain drops, we ventured out and I was able to get some wonderful pictures of the beautiful old mission that was built in 1772.  The original padres' residence is now a museum and had some great artifacts with pictures from days gone by as well. 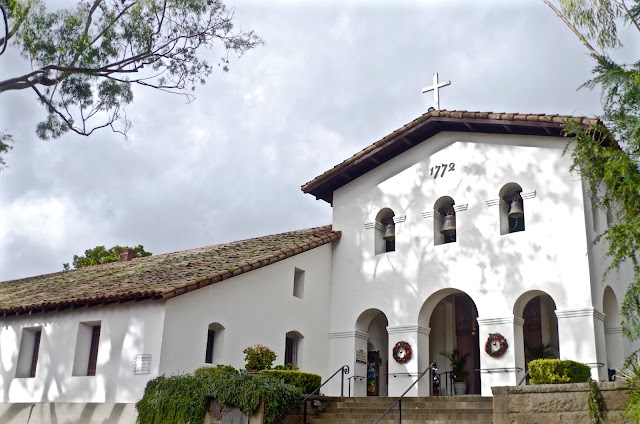 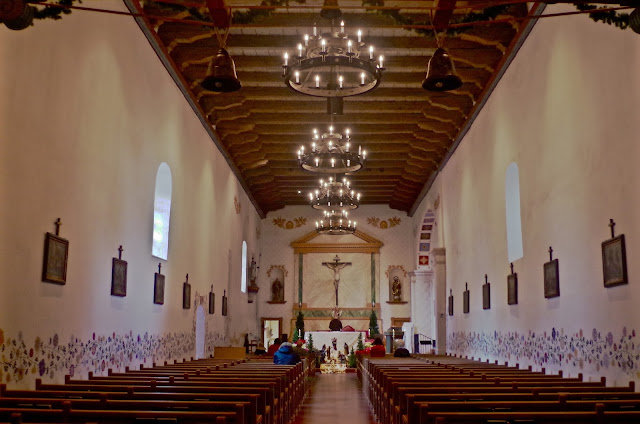 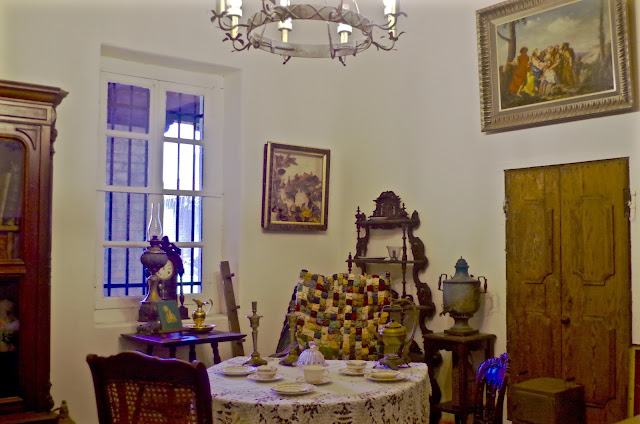 We tootled around town a bit, and peeked into a few stores and galleries.  Even stopped to see "bubblegum alley" where people have stuck probably millions of chewed gum on the two alley walls over many years..."almost" art!  ;-) 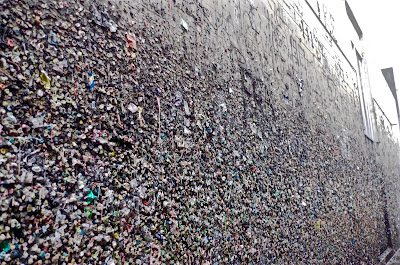 We drove another day to Cambria, dodging more rain & sun & rain & sun.  Peeking in their various art galleries and shops.  My favorite was a piece made completely with 1960's flower pins! ("Peace" by Michael Courville)  Cute town, lovely lunch. 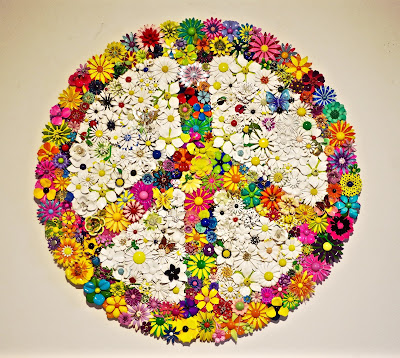 We left Pismo Beach and spent the next night parked along side Rincon Beach just outside of Ventura for the night.  First day and night without any rain whatsoever!  We were given the most spectacular sunset we've seen in many months!  Such a lovely gift.  We were even able to built a little fire that night it was such a wonderful evening.  Next morning the tide came in full blast with waves splashing up against the rocks, pure beauty.  We hated to leave...but San Diego & our friends were waiting on us... 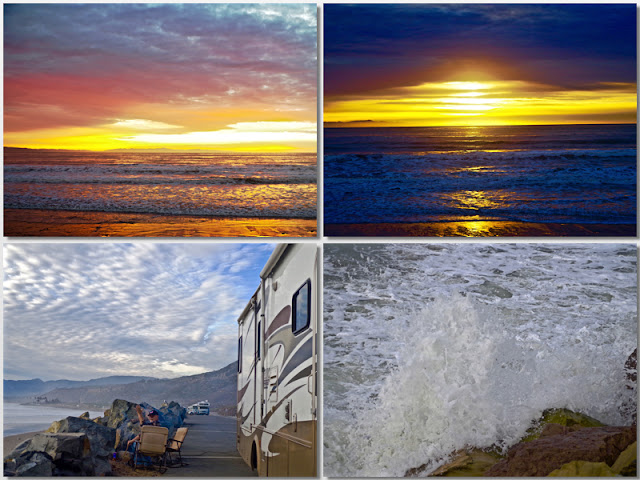 ...kicking back in San Diego,  Marie