Trip to Tubac, last campout of the year!

Our RV Club organized a great rally to the small town of Tubac AZ for four nights to enjoy their Annual La Fiesta de Tumacacori and Lumnaria Nights de Tubac Celebration of the Holiday Season.  16 rigs as well as 3 additional couples (that stayed in cabins) came, making for a great group gathering.

We all stayed together at a nice park called De Anza RV Resort that was close to everything we wanted to attend.  The first night our wagon master had reserved for us to go to the local steak restaurant, Longhorn Grill & Saloon.  They had a nice large tent set up outside filled with heaters, so it was warm and cozy.  The food was great, but alas, the servers didn't have a clue what they were doing and they jumbled simple orders continuously (we only had 3 choices), took hours to figure it out, we were there longer to pay, than to eat!  Sad because it put a damper on the evening that shouldn't have.  Felt sorry for the chef! 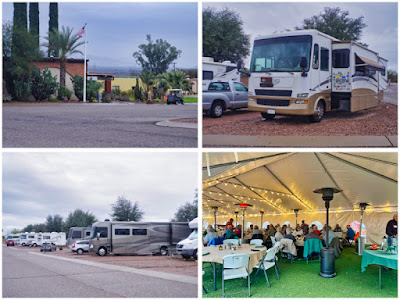 The next day we all pitched in and had a fantastic pot luck breakfast held in their large meeting room.  Wow, so much great food!  One of our members is a retired baker, so you can imagine what his cinnamon buns are like!  Yum!  When we were finally able to roll ourselves out of there, we all went on our own ways - us to Tubac to check out the town and see what to expect later for the lighting of the lumnarias.

Well, I have to share, I didn't know what to expect...Tubac is fairly close to Mexico, small and "out in the middle of nowhere"...so I didn't have big expectations...boy, was I surprised!  What an incredible arts and crafts community!  We have been to Sedona, Aspen, Santa Fe, etc. and I have to say, Tubac is right up there with them, if not surpasses them!  Their art was across the board in diversity, not just Mexican, not just Southwest, not stuff you've seen everywhere else, but their own.  I don't know how they attracted the artisans there or their work, but if I ever win the lottery and need to furnish another home, I'm shopping there! 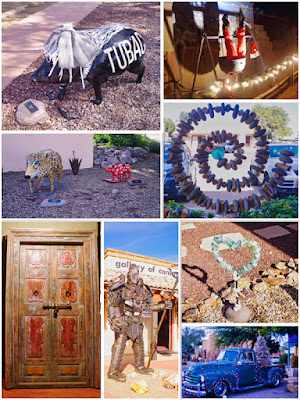 As the sun went down, the lumnarias began to be lit.  Some shops went all out, with tons of them, all over their place, many served nibbles and small drinks as well.  It was all very festive and fun!  Several artists demonstrated and talked with shoppers, musicians played, people strolled around and everyone took pictures. The next day was the Fiesta de Tumacacori held at their National Historical Park.  Locals set up a variety of booths selling everything from handmade items to fruits and veggies, and of course lots of good food.  The Park Rangers had several booths with handouts with information of several of the parks in Arizona.  They were also giving tours of The Tumacacori Mission Church.  They had a stage set up and about every 45 minutes different dancers and musicians performed. 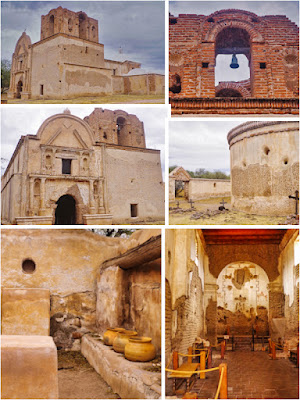 We roamed the booths and enjoyed talking to some of the various vendors and sat and watched several of the dancers for a bit.  Afterward, we walked over to the Mission and took our time to wander through all the nooks and crannies of the old buildings.  It was the first mission to be located in Arizona, founded by Jesuit Father Eusebio Francisco Kino in January 1691.  This building was constructed in the early 1820s and never entirely completed. Abandoned in 1848 under pressure of Apache raiding, Tumacacori began falling into disrepair; it became a National Monument in 1908. 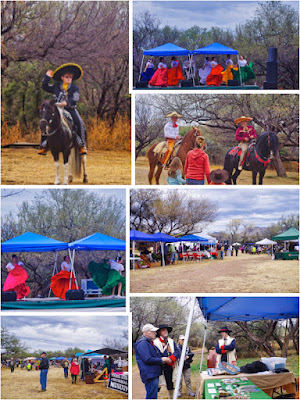 The storm was threatening to start, so we left and decided that "indoors" would be a safer bet to grab a bite to eat.  Recommendations had been given to go to a local favorite called Wisdom's Cafe nearby.  "Easy to find" we were told, "just look for the big chicken, you can't miss it!"  They were right...and about how good the food was too!

De Anza RV Resort treated everyone to a free Margareta Happy Hour later that night as the rain came down.  It rained on and off the rest of the weekend, but cleared up just in time for all of us to pack up and head on home (wasn't that nice?).  All in all, it sure was a super trip and a wonderful new place that we'd  like to come back to again!