Once we settled into Bend, things seemed to turn around for us.  The sun came out, things warmed up and once again life was good!  Yea!  Our new campground was lovely and a great place to "get things settled".  We needed additional tires, and electrical fixed from the blowout, as well as to just rest up from the experience of it all.  Calls were made, people came out, and things were handled (as best they could, anyway).  There didn't appear to be much to "go and see" in Bend except for Tumalo Falls, so we saved a pretty day for that and took a short drive out to see them (along with hundreds of others, as it turned out!).  They were indeed lovely, but what I enjoyed even more, was the beautiful grove of aspens I found along the way!  Jack was kind enough to pull over to the side of the road for me while I tromped into the woods for a bit and spent about 20 minutes just basking in their beauty while I snapped picture after picture trying to capture it all.  Colorado has nothing on this sweet little grove!  I could have stayed there all afternoon just watching the breeze flicker their cute little leaves so they just sparkled in the sun... 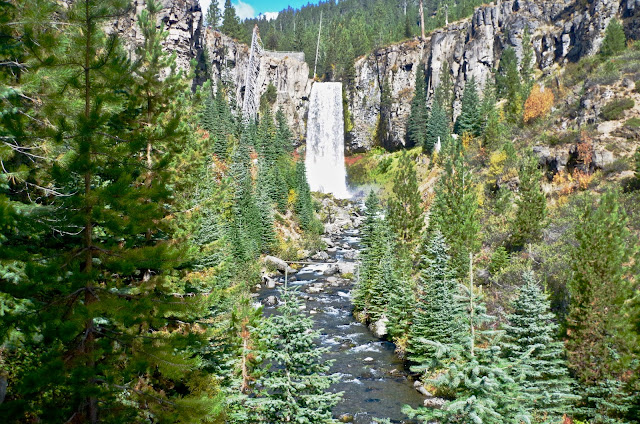 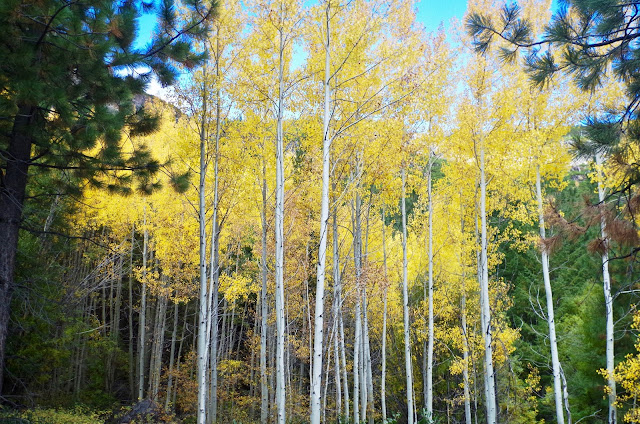 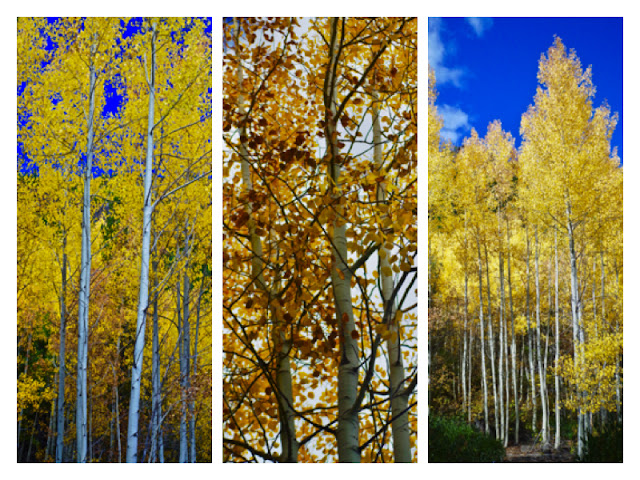 As we drove back to our campsite, the drive picked up several of the trees starting to turn yellow, orange and red...aah, autumn is definitely starting...and even a nice view of Mt. Hood... 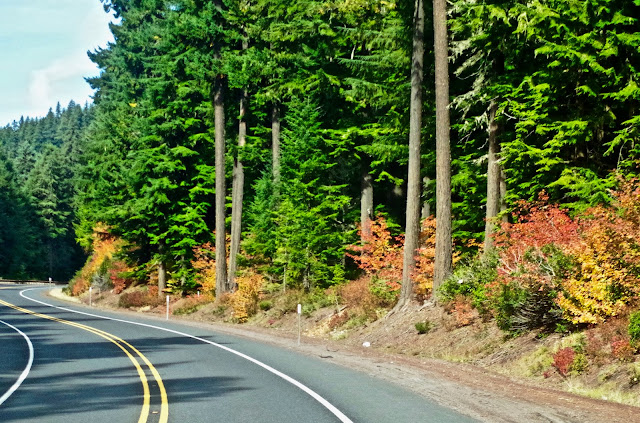 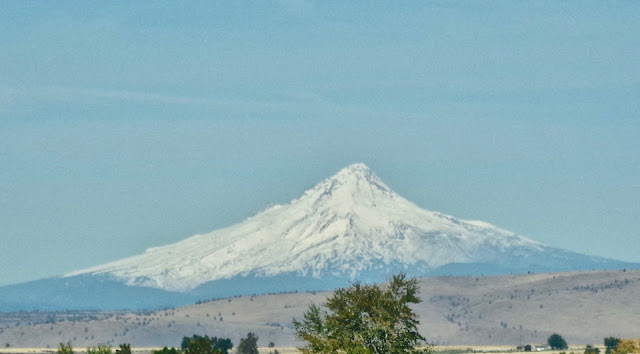 We left the following morning for a week in Portland.  Usually we are here for only a couple of day, and usually in the middle of November, so it's nice to come a month early and to be able to spend a little more time actually enjoying the city.  We have friends and a niece here that we visit as well as a couple of "favorite stops".  We tried a new campground this time, right in the city, and it sure was nicer than commuting 45 minutes each time!  Columbia River RV is right by the airport and I was concerned the traffic and the noise would be a problem, but it really hasn't been; we will use this place again!

It wouldn't be Oregon or Washington (your right on the border) if it didn't rain some of the time...so of course it did...but I have to confess, it hasn't been to bad!  We decided to take one of the days and drive out of the city and go see the state capitol, which is in Salem - just an hour and a half away.  Not bad, and we have never been!

When we got there...the sun came out!  ;-)  We missed the tour, so did the "self-guided" one and chatted with the receptionist to learn as much as we could.  It is a pretty simple capitol building without a lot of "fancy" trappings as it was burned down twice before and they decided to use a lot of marble etc. the last time.  I did like the "Woodsman" on the top of the dome (called the drum" because of the shape) though - very different.  And different is what they were after.  They wanted Oregon's Capitol to "stand apart from all the other Capitols...to be "distinctive and different".  Another change they made was having dual staircases, instead of one grand staircase at the entrance.  They felt it was more open and airy adding more natural light to the area.  The drum has 5 windows around it that also enhances this effect on the rotunda and helps shine down on their beautiful murals. 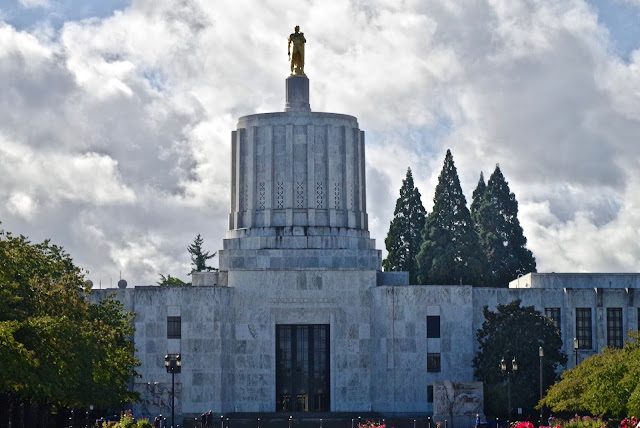 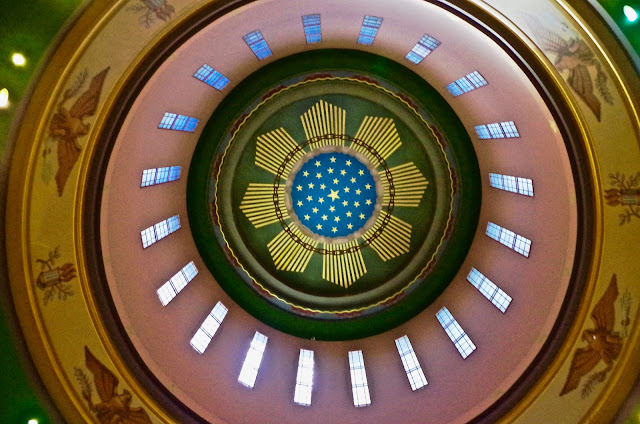 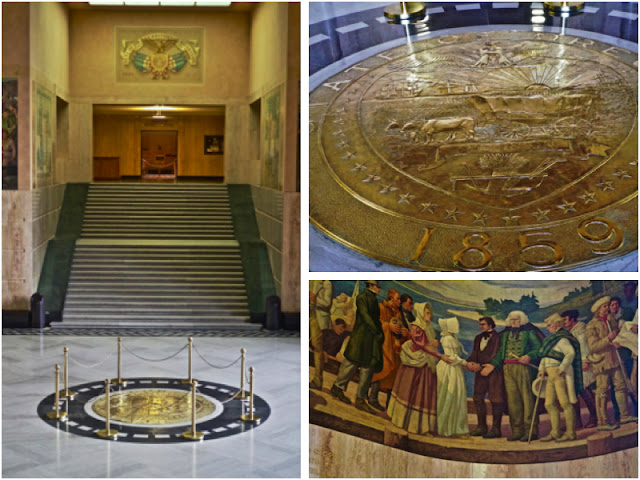 Our last day in Portland we were able to finally enjoy two of their beautiful gardens...the International Rose Test Garden of which Portland is famous for, and the Portland Japanese Garden.  I was surprised to find that the Rose Garden still had so many flowers in bloom.  Being mid October, I expected to see a lot of bare bushes, but was pleasantly pleased to see blooms everywhere!  Nothing like it would be had we been there in April or May...but certainly beautiful for a sun-filled October in Oregon!  Nice! 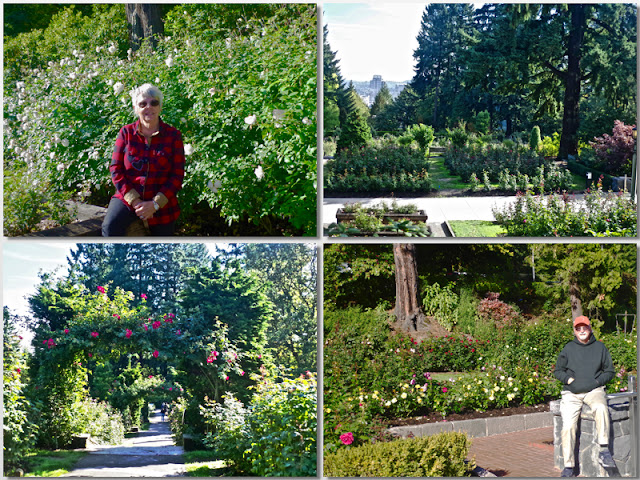 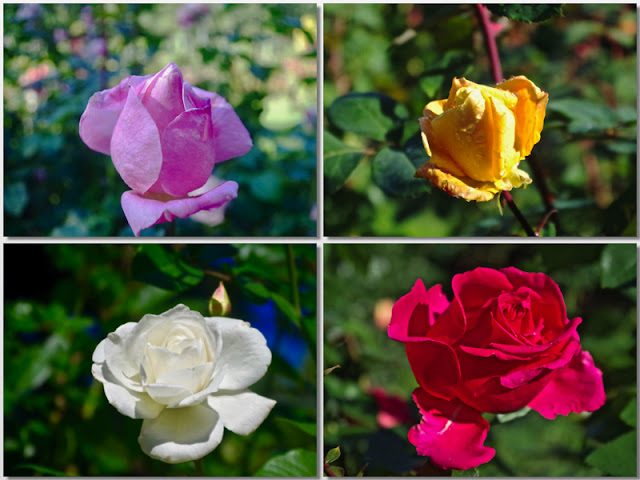 Portland Japanese Garden was delightful.  I had no idea what to expect.  We lucked out and wandered into a guided tour, thank goodness!  Cheryl spent an hour with us and walked us all around the park and explained each of the 5 areas of the park and shared the philosophy of the design of each area.  It really made a difference knowing the "what and why" we were seeing.  I'll never look at a Japanese Garden the same again!  Absolutely beautiful... 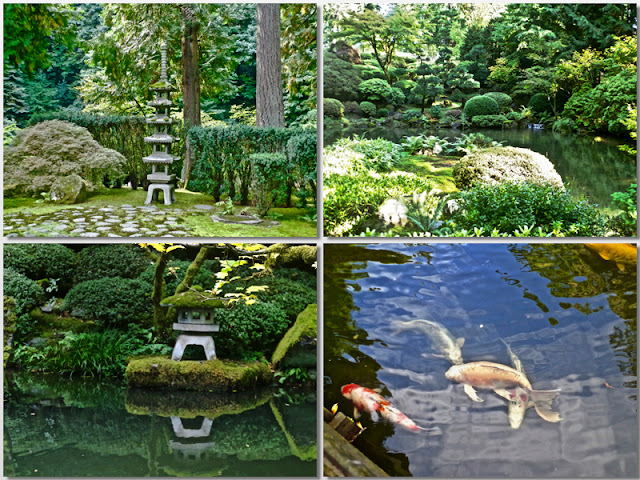 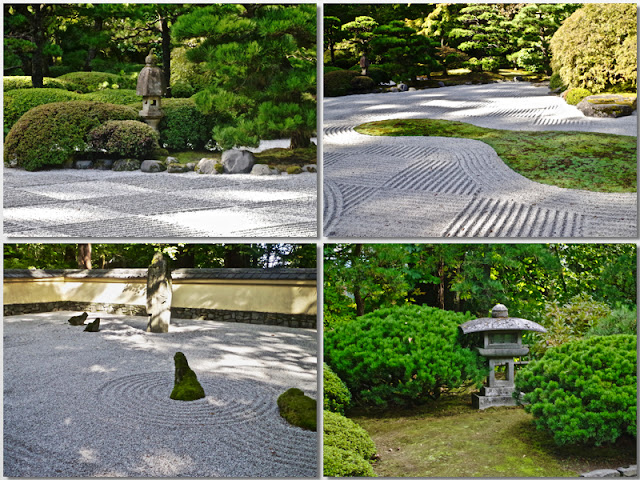 They also had a very interesting exhibit on The Noh Masks of Ohtsuki Kokun...how they are made and their meanings as well as some beautiful silk brocade costumes. 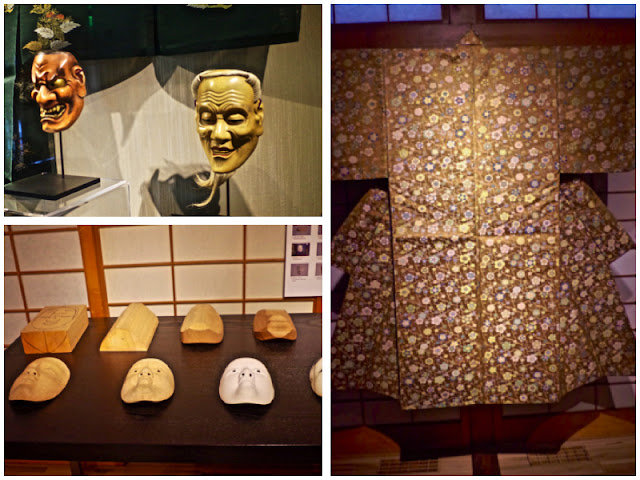 It was a beautiful way to spend the sunniest of days here in Portland!

...on the road to Washington,  Marie

Not always according to plan...

We had some extra time and the weather was great, so we decided to leave Pahrump Nevada and head to Portland Oregon on a very s l o w lazy route going through eastern Oregon via the state scenic road instead of the Interstate highway.  One we hadn't been on before, so new scenery, less traffic, no billboards or fast foods etc. to stare at etc.  We could just take our time and enjoy the ride.  We also decided since we had the time, to stay at a campground in an off-the-beaten-path, near a wild life refuge and spend a few days enjoying that area.  I had read that it had thousands of acres of marshes, lakes and grasses that attracted hundred of birds, water fowl, deer and other animals.  I thought it would be wonderful to see and photograph.  Afterward, we could head on to Bend and then on in to Portland.  That was the plan.

Well, the trip started out ok...full of sunshine and promise.  We almost made it out of Nevada...we were about an hour and a half out from the last town (Winnemucca), in the middle of "nowhere", listening to our audio book, watching the endless view of low shrubs, when all of a sudden...BANG! thud-a-da-a-dud-a-dud... the sound only a blown tire can make...and the smell that only a motorhome blown tire can emit!  Dang.  We slowly pulled over to check it out...yup, right rear inside tire, blown...  So much for choosing a nice back road, now what!  At that moment, we looked up and down the road and couldn't see anywhere to even pull off the road!  We slowly drove, and would you believe it, about a quarter of a mile down the road, in the middle of nowhere, there was a gas station?  Do we have an angel on our shoulders, or what?  Nice big wide pull through area that we could pull around in back and just sit and wait.  We called our handy Good Sam Service people and in two hours (told you we were in the middle of nowhere) two young men came out with two new tires and replaced both right tires (you have to do both) and an hour later we were back on the road again! 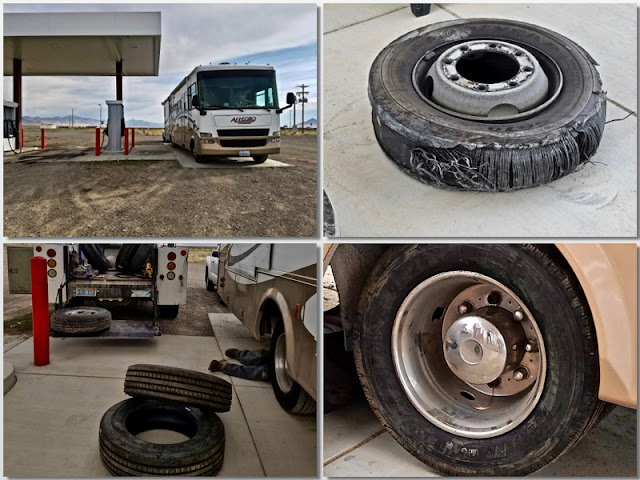 Now, by this time, the sun was beginning to set and we still had three hours to get to our campground.  The "scenic byway" turned out to be pretty boring actually...mostly sagebrush, some trees here and there and maybe a half dozen farms/ranches with some cattle.  As it got dark, being on the state road, without industry, there were no lights of any kind, so it was very dark...and we saw nothing for a very long time!  It was a good thing the campground had a lighted sign, or we would never have seen it!  Holly, the manager was super nice and walked us to our site with a flashlight because even the campground was pretty dark! 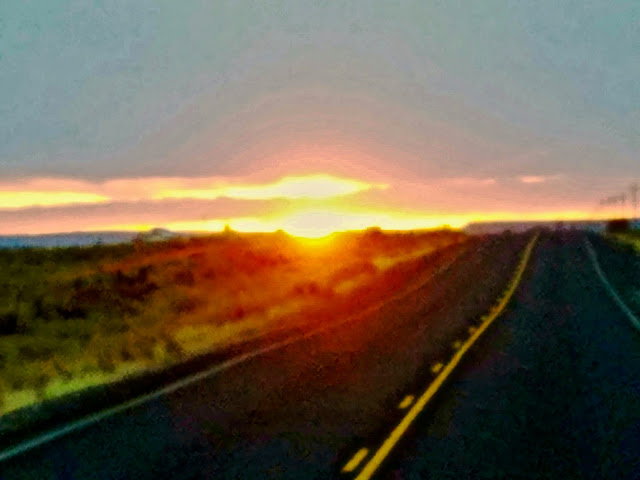 The next day the temperature had dropped by more than 30 degrees with the wind chill!  It was predicted to rain, so we decided to stay in and just settle in (and pull out our winter clothes).  The following day we ventured out to check out the Malheur National Wildlife Refuge. 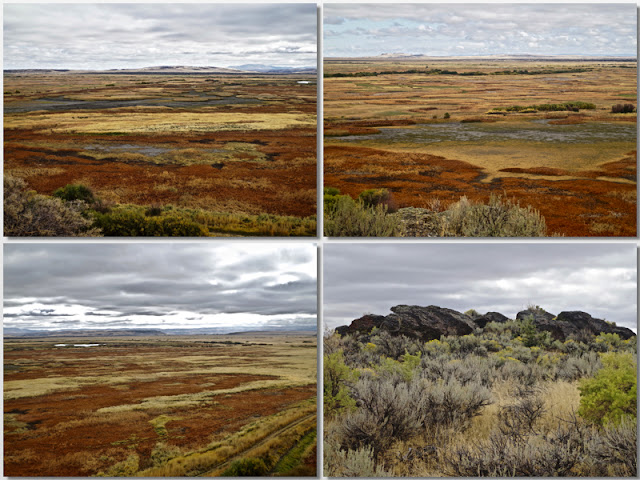 We picked up their Auto CD and drove around as much as we could, but soon discovered that we must be "in between" seasons.  The summer fowl have left and the fall/winter fowl and animals haven't arrived yet because we didn't see anything!  Almost all the marshes were dried up and  even the lakes were almost a third the size.  Pretty disappointing.  We did get to see the Pete French Round Barn though, which is quite unusual. 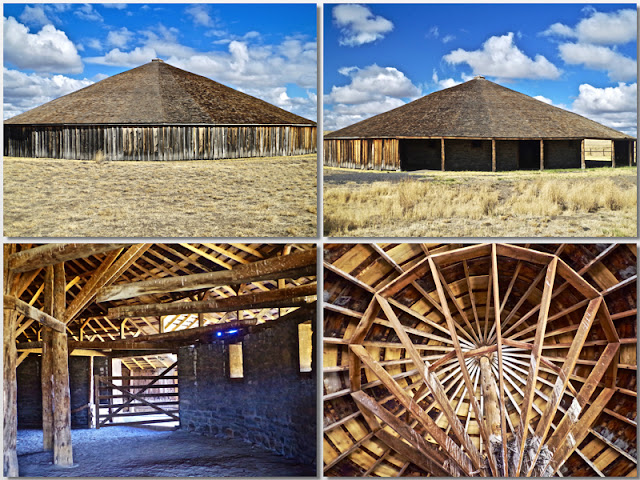 The Narrows Campground was really quite nice, with a cute cafe & fully stocked store.  Each site even had individual fire pots and BBQ stands with patios and tables.  I'm sure during the summer when it's warmer, it's quite nice here.  It was just so windy and cold, it even froze the water pipes our last night.  We were ready to leave and head for Bend. 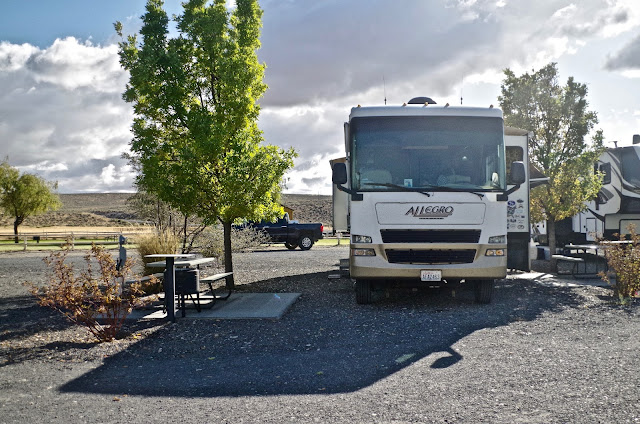 This was an experience...you have them when you full-time like we do.  Just, thank goodness not often!