Memories...remembering old ones and making new ones...

There's the old saying "you can't go home again"...but this week I did, sort of...and it was really special.

Several months ago our RV Club announced that they were planning a group trip to Lone Pine CA in October.  I was thrilled!  Lone Pine and Inyo County is where my Dad and Grandpa grew up and where I have wonderful memories of!  I haven't been back there in many, many years and to be able to go camping for several days, would be such a gift, so I immediately signed up.

As the time came closer and closer, so did the Covid Virus and more and more people canceled.  As it turned out, the "group event" pretty much canceled and only three rigs ended up going!  It went from 22 rigs down to just us 3, but we made the best of it anyway!  Driving there we hit headwinds of 16-18 miles an hour, and in the over-night stay in Needles, that night, gusts got up to 30-60 mph.  We were rock'n and roll'n! 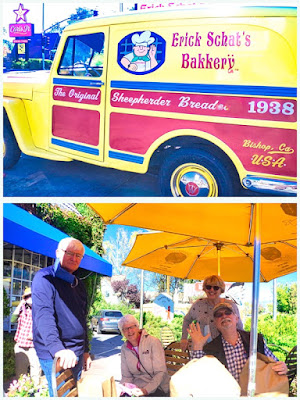 Our stay in Lone Pine was lovely though, sunny and clear.  The first day was a bit windy, but after that it was pretty calm.  Our first outing was a drive into Bishop to check out the "big city" with the first stop at Schat's Bakkery.  They have been around since before I started coming here as a kid!  Family owned for generations...and still wonderful!!  The BEST Sheepherders Bread ever!  Can't go home without a loaf! 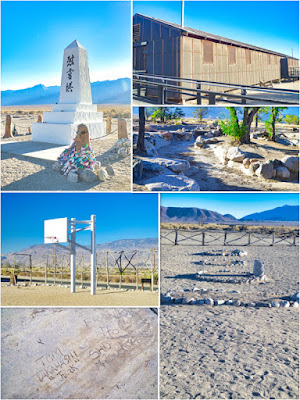 After wandering around the rest of the town, we stopped for lunch then headed out to see the Manzanar National Historical Site.  They have really built this up since I was here, showing examples of of what the housing buildings looked like, outlining the areas of how many they had, rebuilding the basketball court, fire station, and a few other buildings.  They uncovered the garden and pond.  At one time they housed 10,000 people of Japanese ancestry there. 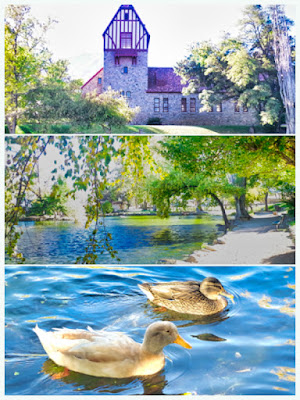 From there we drove over to the Fish Hatchery and walked around it.  It was closed, but we could still walked around the outside and enjoy the ducks and the beautiful grounds.  When I was a kid, my friend Margie and I used to walk or ride our horses up here all the time and talk with the ranger and visit.  We just loved it up here.

We then drove over to where my Grandfather's property was and tried to check it out as best we could without trespassing to much.  Gone were all his houses and orchards as well as the creeks.  He used to have one big creek and two smaller ones that ran down from the Fish Hatchery (from Mt. Whitney) right through his property, but they were all dried up now...sad to see.  Looked like the property was split up into individual lots (he had 3 acres) with a few Cottonwood trees left here and there and not much else. 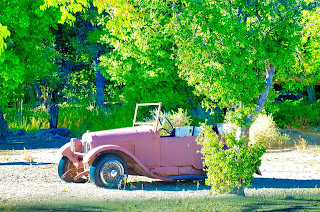 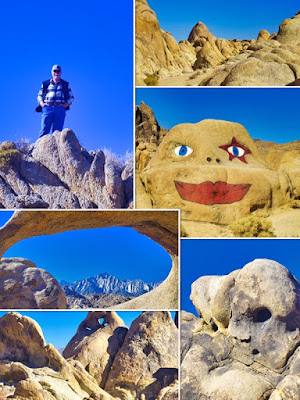 The following day we spent driving around and hiking back into the Alabama Hills where they made over 400 films.   Growing up, I knew that my Dad had been an extra and had even taught some actors how to ride horses in some films "somewhere" in the hills, but I never knew where, nor paid much attention to it really.  It wasn't until a few years ago when I began hearing about how Lone Pine was famous for a number of films that I put it all together!  Dad used to sing us a lot of the cowboy songs that they did in those old movies and tell us stories of how old Hopalong Cassidy didn't even know how to ride a horse at first and other funny stories with the Indians.  Wonderful old memories. 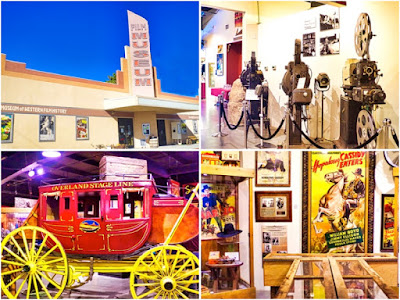 The next day we went to the Museum of Western Film History in Lone Pine and was really amazed at just how many films, the kind, and who all came here to be in them!  I really had no idea!  It's a great museum too, they really had a ton of exhibits with an extensive collection of real movie costumes, movie cars, props, posters and other memorabilia.  They have a Film Festival every year that is suppose to be quite something that I think our group is going to book for next year, so who knows, maybe we will be back!

You may not "quite" go home again, but after 60 years, this came pretty close, and pretty sweet...thanks for the memories...

...on the road in Lone Pine California,  Marie

The Campgrounds we stayed at were:  Needles KOA and Boulder Creek RV Resort