To hot or to cold?

Well, I guess I must truly BE an "Arizonian" now...as our trip to California's Dana Point proved that anything cooler than 85 degrees, and I'm cold!  So, here I am, packing my bathing suit, shorts, sleeveless blouses (and one pair of long jeans with two long-sleeve blouses "just in case of cool nights") getting all ready to enjoy days sunning on the beach, swimming in the pool, walking along the harbor, enjoying the wonderful "Southern California weather"!  Right?  Wrong!!  Was I in for a surprise!  Mist, fog, cool wind, haze and damp air is what we had!  I LIVED in those jeans and two long-sleeved blouses...and almost bought a sweatshirt!  Boy, have I changed since my days of living in San Diego!  ha ha  What a wimp I've become!  My friends kept telling me it wouldn't take me very long to "get acclimated to the dessert" and I guess they weren't wrong.  Wow...

Besides the adjustment to the weather, it wasn't to bad...California is still more "controlled or locked down" than Arizona.  Almost all of their restaurants are only serving outside.  They have set up some tenting at some areas, but that really only consists of "tops" with the sides up and the breezes still coming in at you...cold, especially at night!  We did manage to hunt down a couple that did have indoor seating...The Chart House being one, along with Harpoon Henry's.  We lucked out and was treated to a wonderful 4-course dinner and drinks at The Chart House by our hosts at our Time Share. Yum! 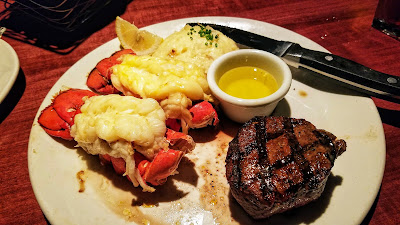 We booked a two-bedroom so friends could join us, and our faithful couple, Lupita and Lew took the time to drive up after work and stay Saturday and Sunday with us, bringing all kinds of goodies for us to enjoy as well!  Of course we talked for hours and hours, almost forgetting to go out to eat!  It never fails to surprise us how much time passes since the last time we all got together....how does that happen?

My two nieces and nephew also made the trip up as well, and we met them in Carlsbad.  Love that town.  Always so pretty there.  Used to think we would wind up there to live someday...guess it wasn't in the cards... 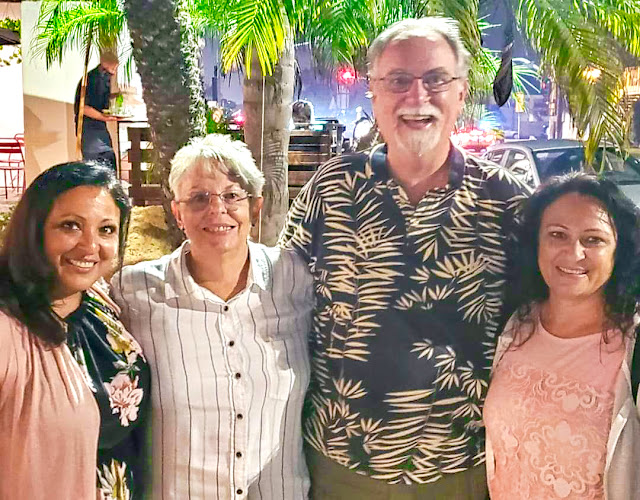 We did enjoy lots of nice walks along the Harbor and into San Clemente.  Friday night gave us live music along the harbor while we ate ice cream and enjoyed watching the sunset over the harbor... 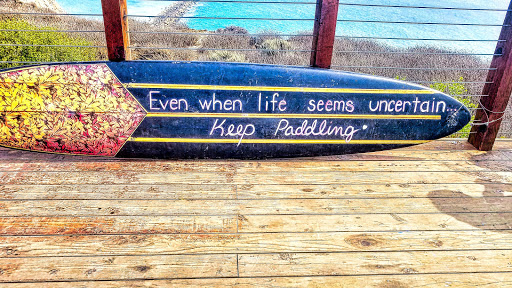 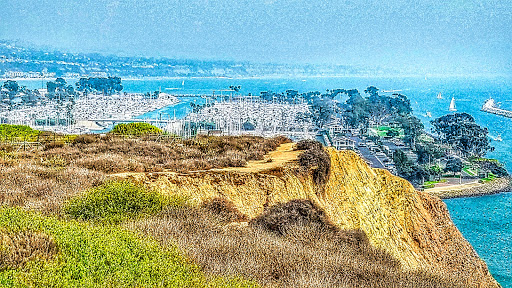 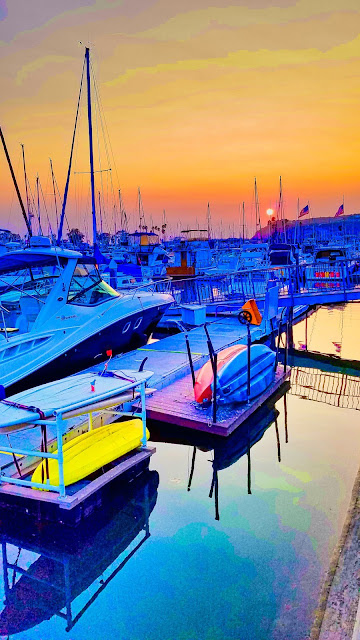 We ended our last day with a wonderful lunch visit with some dear friends that we hadn't seen in years and years!  We had some good laughs at how we all have gotten "gray hair" now!  ;-)  So fun having long-time friends!

Deciding to stick close to home this year, have left us pretty much "hiding out" in the air conditioning of our home here in the heat of the Arizona Valley. Not fun. Other than going to the pool in the mornings, doing a few home projects, it's been pretty boring, to say the least! We were starting to get cabin fever! This is the first summer we've NOT traveled, and I can honestly say, I really, really miss it. Reading the various blogs and articles about how crowded campgrounds have been, how much the campground fees have gone up, how difficult it has been to even get a reservation, and then if and when you do, what was there to do and see because so much is closed, made travel seem like a senseless and frustrating expense. Along with everything else going on right now, it wasn't one we decided to take on. So, we asked ourselves, "what can we do to get out of here, yet not go to far?" We own a time-share, and had saved up points that we had intended to use this year, along with my niece and her husband, to take a nice big trip to Spain and Portugal...but, that wasn't going to happen now, so I "banked" what I could, but some, I had to use now. So, we chose a week in Sedona AZ right away, and a week in Dana Pt. CA in Sept. Then we began looking into where we might be able to camp close by, yet "cooler" than here in the valley. The first place we could get a reservation was in Payson AZ, for a week. All the other areas in the local mountains were booked solid.

We've been to Sedona a number of times before, so this was just going to be a relaxing, change of scenery get-away. Luckily, the restaurants and shops were open so it made getting out and about a bit more enjoyable. Their pool was also open, so we enjoyed that as well. The temperatures were only about 15 degrees cooler, but enough to make walking around during the day possible. It was the first time we'd been out walking around in months, and it really felt good1 Sedona is a pretty place, even to just look at. I was glad we went. 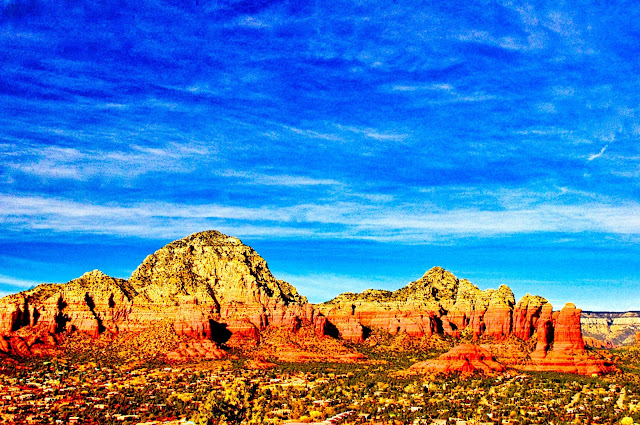 The following week after we got back was our camping trip to Payson. We actually had been to Payson many years before. I remembered the Mongolian Rim and the Natural Bridge and the cute little town. We had stayed in a cute cabin then as it was before we had an RV. Since we were going to be here for only a week, I didn't see any reason to bring out toad, just the RV. The campground was small, and to our disappointment, not as many trees as we had hoped, and not as "cool" either. The temperature here was only about 10-12 degrees cooler than in the valley, which didn't make for sitting outside for more than a few hours in the morning feasible. I regretted not bring the toad after all, since we ended up being inside the RV more than I had anticipated, but, even still, it was better than being in the Valley. 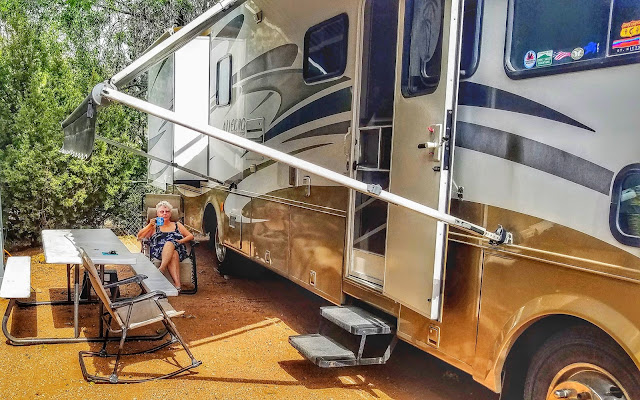 When we got back I continued to look into other campgrounds in the mountains for reservations. Friends were going to Show Low area, and I kept trying, but I could only get a couple of days at a time, or at another one, they wanted $75 a night and I just won't pay those prices! Our friends here wanted to go with us, but she doesn't like "switch-backs", so I started looking closer, at Flagstaff. Found a campground there that had two sites for a full week at a great price so we booked them for mid August! Crossed my fingers that it was a decent place... Turned out to be a great place and a great time! Our sites were near each other. Our friends had a bit more shade than us, so we ended up playing cards in the afternoon and having dinner at their site each night. Lots of wonderful pine trees and a super nice camp host that we even invited to join us for dinner one night. What a funny campground though...more like a puzzle than any I've ever been to! The camp host, Diane explained that it was built in the 60's when RVs were a lot smaller, so when they started getting bigger and needed bigger sites, they had to start tearing down some of the sites and combining them to make them big enough for some of the larger rigs...this, they are situated every which way! Some are side-by-side, some back-in, pull-through, or pull-in! It looks very confusing, but, I guess it works! We liked it so much that after a week, when our friends were ready to leave, we weren't, so we went to Diane and asked her to work a miracle and see if she could figure out a way to find us a spot for another week! She jiggled this and that and did! We moved and stayed another week...I was just able to stretch out our food supply for the extra 7 days! Yea! Once again, we hadn't brought the toad, as our friends had their truck, so didn't see the need! ha ha 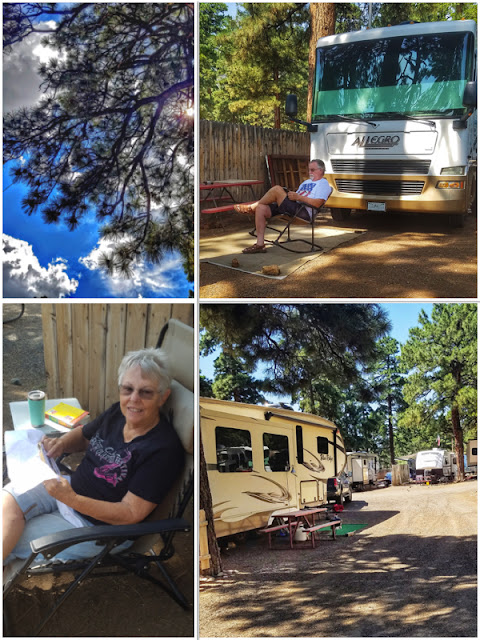 All that is left now is the trip to Dana Point later in September.  That's along the beach, so that should be different.  We have friends near there who we will be seeing as well, so we are looking forward to that trip as well.  I don't think we have any more camping trips planned until late October with our camping club...but one never knows!  Cabin Fever may strike again...stay tuned!
Until then, kicking back in Arizona,   Marie