It's been a while since I've written a blog...and that's not like me.   After all, I usually have something to say about what we are up to and where we are!  Actually, I still do...it's just that it's a bit more difficult right now, and that's why I've been putting it off for so long...

You see, I had a bit of an accident, a small one (no nothing as dramatic as the car one in Hawaii) and it's left me with a broken right wrist.  But let me start at the beginning...

We left California on December 30th and headed to Surprise Arizona to meet up with friends of ours that have lots in a big RV Resort here.  We've stayed here last year for a month, and this year decided to try it for three months, something we've never done before.  It's quite a nice place with a ton of stuff to do and we were able to get a lot at a very reasonable rate, so, we thought this seemed like as good as any place to hang out until the weather gets better!

The first thing Jack did after getting us settled in, was to take our bikes to the shop to have them gone over, as they had been in storage for the past two years.

We all celebrated the New Year together with good food, drinks, and lots of laughter.  That following Monday we took our rig into Phoenix bright and early to have some work completed that didn't get done while we were in Washington.  It was so early, nothing was open (even after breakfast) that we joined the "mall walkers" for an hour!  We took in an early movie, went shopping...then finally got the call that our rig was ready!  Back home we went.

We still had enough time to set everything up, and make our spot our "home".  Yea.  Tuesday we got the call that our bikes were ready to be picked up, so off we went.  I was really excited to finally have them back and really looking forward to riding all around this very big park.  Our two friends live close enough to walk to (a couple blocks apart in opposite directions) but the rest of the park's activities are quite a bit further.  We could rent a cart, but I want the exorcise!  We went for a nice (short) ride that afternoon.  ;-)

Then came Thursday the 5th...it started out just fine...A lovely sunny day.  We decided to go for a nice bike ride.  I was beginning to tire and suggested we turn and head on home, as we came onto our street, it has a small decline so I took advantage of it and pumped it so I could coast the last little bit as I made the swing into our lot...at least that was the plan.  I had forgotten that Jack had pulled the chain across the large part of the driveway, leaving only a small opening between it and our truck (pretty much forcing you to stop out front and walk the bike in instead of ride it in).  So, I came barrelling down the road, turning my handlebars to make the "big swing", I quickly realized with the chain there, that wasn't going to happen, and with the truck where it was if I didn't do something fast I was going to crash head first into it...so I stuck out my right hand and stopped the crash.  The thing was tho, because of the speed, etc. it took all of the impact.  So, I really broke it good!

End result...surgery.  They had to put a steel plate with two screws to pull it back together.  They thought they were going to have to add some bone chips into the gap, but thank goodness, they ended up not needing to after all.  The good news...I should be out of this cast in 8-10 weeks.  I'm counting the days...So is Jack, he's been waiting on me hand and foot!  It's tough when you are right-handed and that's taken away...then add un-ending pain on top of it and the party is over!

So, to say that this has slowed me down is putting it mildly...but, hey, the weather is icky anyway, and we are going to be here for awhile, my friends have loaded me up with lots of movies...and now I've caught a cold, so what else is there to do anyway?  ;-) 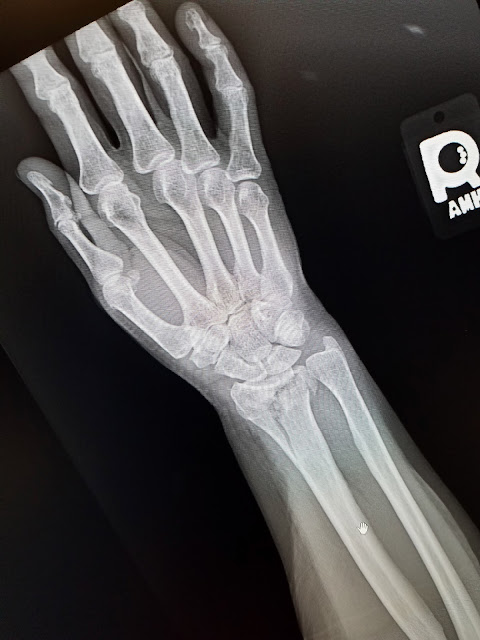 ...kicking back in Arizona, Marie
Posted by Marie 1 comment: