Aloha!  After years of an "open invitation" from our dear friends, Pat & Taylor, to come visit them at their vacation home on the Big Island of Hawaii, we (finally) took them up on it and the booked a much excited visit!  Eight days in paradise!  Not nearly enough, but Pat had each day planned out so that we would get to see as much of the island as possible, but still have time to sit and watch the birds in the morning, relax and read a book by the sea in the afternoon, and have a glass of wine in the evening.  Ah, the life...

We were greeted "Aloha style" with a lei and a "modern banner" a la her iPhone blinking MARIE & JACK.  We had to laugh, leave it to Pat and Taylor to think that one up!  After a long flight (from San Diego CA) and a long drive to their place, they live in the most southern tip of the island, Na'alehu, we just made a quick stop for pizza before calling it a night.

Greeted with wonderful tropical fruit, birds singing and the sun shining (each morning!) I knew the week was going to be great!  First stop was the local weekly Farmer's Market!  (It was on my list!)  Just walking through it was a treat to see all the beautiful fruit and local veggies!  Then it was off to the Hawaii Tropical Botanical Gardens.  Let's see...how many pictures did I take there?  Well...I kept it less than 100!  ;-)  That's good for me!  Waterfalls, streams, orchids, ginger and ferns is what I would say is their "specialty".  Beautiful all.

I won't go exactly from event to event, but I do want to share the highlights with you, as they were fantastic, and if you should ever go - you really would want to check out these places, they are GREAT!

Hawaii Volcanoes National Park is actually several sites in one area.  Of course, everywhere you drive you see miles of black lava, then there are the steam vents to watch; then of course the big attraction, Halema'uma'u Crater, which right now is just puffing smoke (thank goodness!) but at night (which we came back for) it glows a bright red, which is really cool to see!  Then you've got Mauna Ulu, which is kind of spooky because that's where all the damage was and you can see where it went all the way to the sea...kind of eery.  The other really cool thing is the Lava Tube!  That's fun to walk through, and a whole lot bigger than you would imagine!  Lastly, they have a cool museum (and gift shop, of course!).  Nice way to spend some time, and a great National Park.  One more to add to my list! Ha!

You can't visit the Big Island without visiting a coffee plantation!  Kona is know for it!  The one our friends picked was Kona Coffee at Mountain Thunder.  It was a small one, but on the up-side there were just a few of us, so we got an intimate tour as well.  For me, the one "take away" was that the beans, before roasted, are called "cherries".  I'd seen signs at various coffee farms saying "taking cherries" and wondered what they meant...now I know!

You know how Jack and I LOVE factory tours, well, we got to do a couple more unusual ones here too!  One really unexpected one was Vanilla Beans!  Yep, they have the ONLY Vanilla Bean Farm in the US!  What a wonderful experience it was too!  We signed up for the luncheon & tour, yum!  The Hawaiian Vanilla Company is a family owned and run business since 1998, and what a nice family they are too!  We met several that day....Dad, Mom & one of the sons.  The 2 hour lunch and tour was incredible...even in the rain!  Now I know why vanilla is so expensive (and worth every penny!).  What a labor intensive job, ugh.  But it sure does make food taste good!  ;-)

So much more to share...I'll give you a break for now and fill you in with more later! 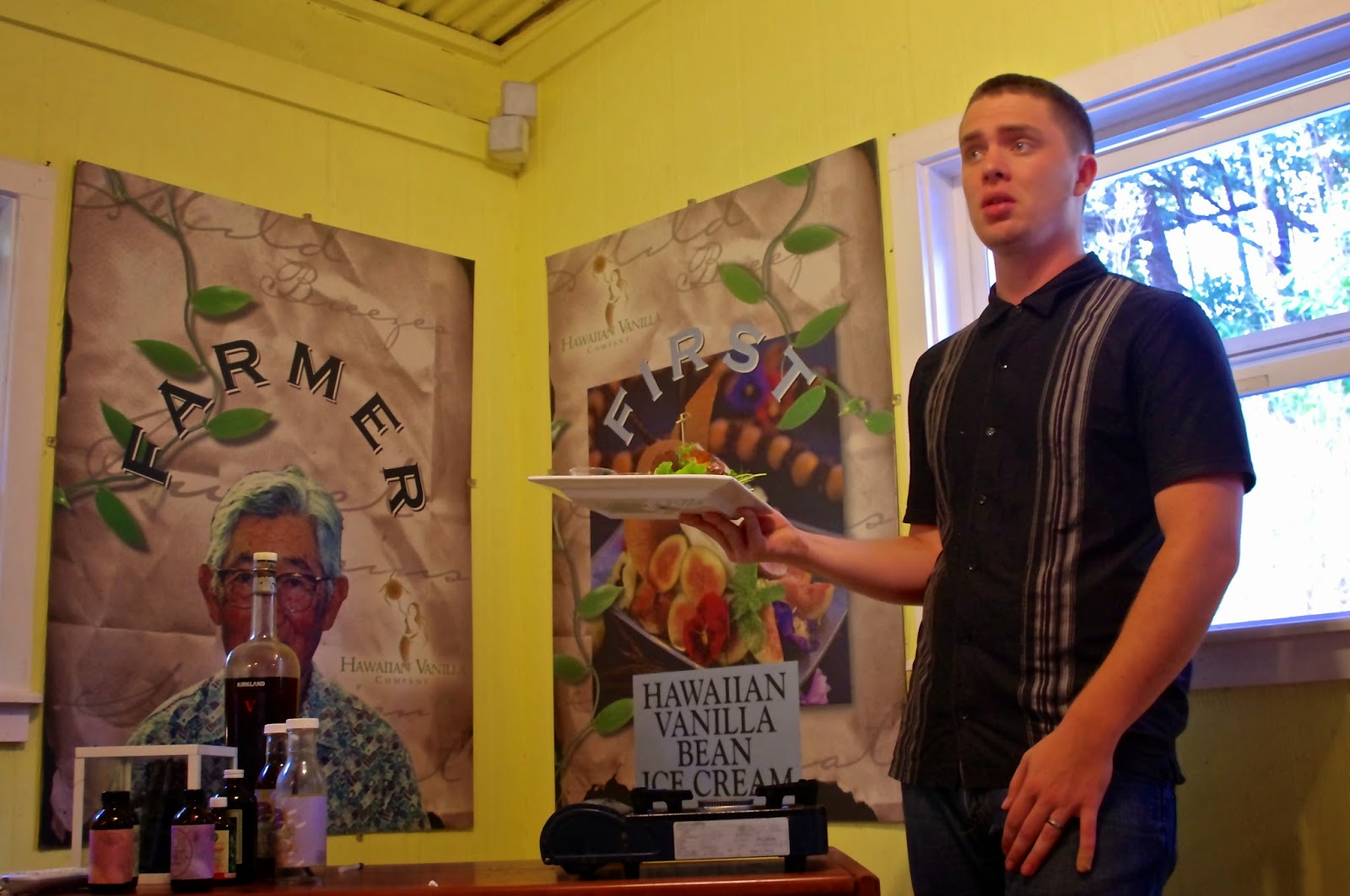 ...on the road on the mainland, trying to catch up!  Marie
Posted by Marie