A few days out with friends...

The last rally of the year for our RV Club was planned for a near by state campground called The Lost Dutchman, in Apache Junction, less than two hours from here.  It was booked for five nights and again, started out with around 25 campers that continued to dwindle down.  We ended up with about 10 rigs, which considering everything, wasn't so bad.

Our first night in camp was absolutely lovely!  Our RV Club hosts built a lovely campfire and we all gathered around to meet each other, chat for awhile and watch the sunset...and boy did it ever give us a show.  As it began, it lit up the beautiful Superstition Mountains that was our wonderful backdrop at the campground, then continued along to color the sky with yellows, blues and reds.  What a wonderful beginning to a nice outing! 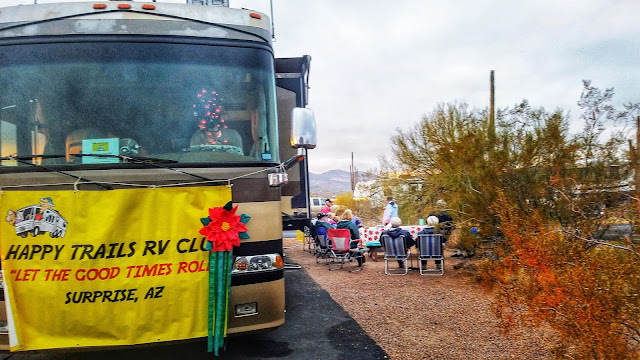 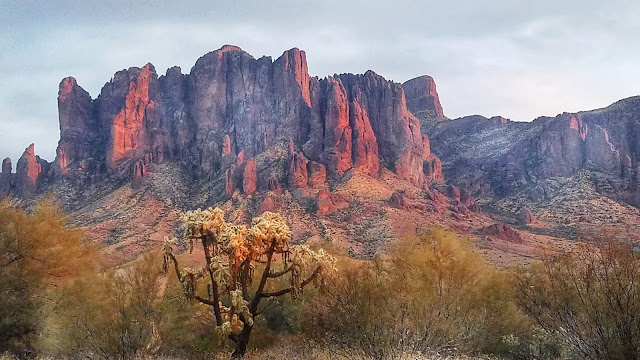 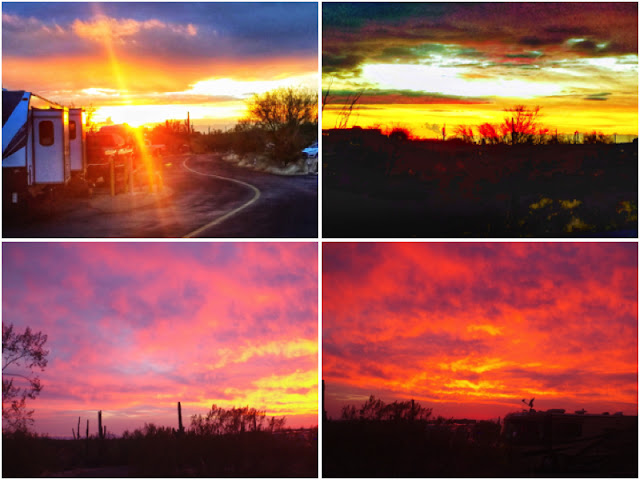 We decided to spend the first day (Friday) going over to the Mesa Market Place Swap Meet thinking that mitmight be less crowded on a Friday than on the weekend.  I think we were right, as it wasn't very busy at all.  We had just a couple of Christmas items to shop for (our "hardest" finds) and was hoping the vendors there might be the answer...and they were!  I much prefer "hand-made" and "local-made" when I can, over buying from the large warehouse stores.  I was even able to find a couple of items for myself, lucky me!

The following day Jack and I decided to take a recommended drive to the nearby town of Tortilla Flat, while several others chose to hike up (at least partway) Superstition Mountain).  The drive itself was really scenic, with a couple of great stops along the way, including a beautiful view of Canyon Lake. 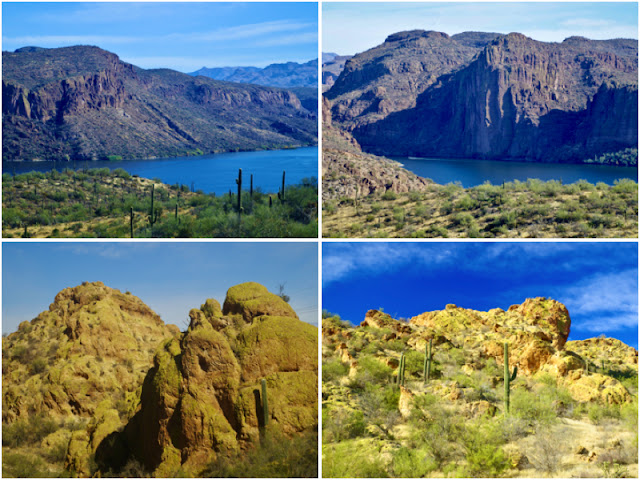 Being Saturday, Tortilla Flat was hopping!  Live music was playing, and the shops were bustling.  I was even able to find the very last item on my shopping list...so all done for the year!  Yea!  The sun was shining and it was truly and beautiful day. 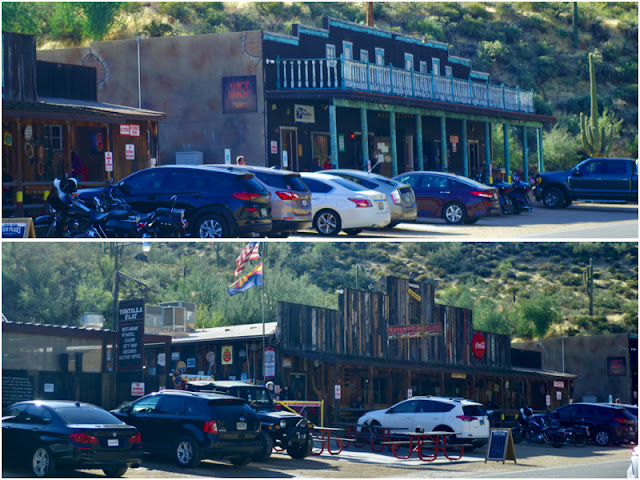 On our way back, we made a quick stop at the Superstition Mountain Museum across from the Goldfield Ghost Town in Apache Junction.  Turned out they were having a small Vendor's Fair and had some "gun fights" entertainment going on.  I met a fellow artist and we got to talking about her art and my photography and what it's like selling it vs offering it free, writing a blog, how we market ourselves, etc.  I really enjoyed our talk and time together.  It's one of the joys of travel, you meet some wonderful, interesting people. 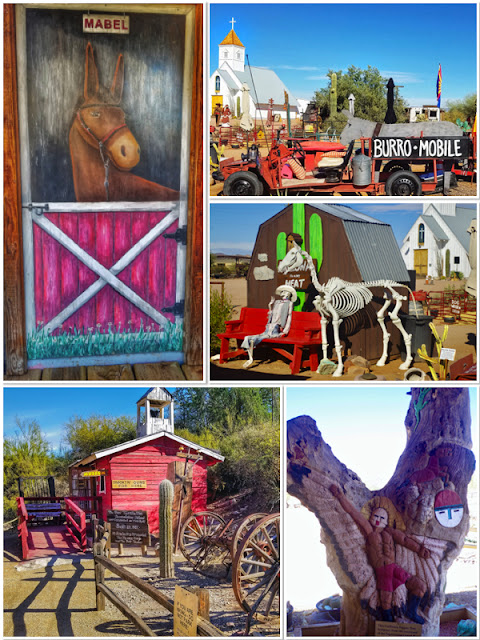 It was a good thing we ventured out when we did, as the next couple of days turned a bit windy and cold.  We all kind of hunkered down and pretty much stayed in.  A coupled of the braver ones still hiked, I think, though.  Sunday night, our friends Kayo and David joined Jack and I in going to Mesa to the Organ Stop Pizza.  We had heard that it was really quite an entertaining adventure...and it sure was!

It's all about the Organ!  Organ Stop’s Wurlitzer theatre organ was built for the Denver Theatre and was installed in 1927 and then after extensive renovations, was installed in this facility in 1975.  The enlargement and improvement of this instrument has been an ongoing project… In 1997, a larger four manual console was added to the instrument. The new console is an exact replica of a “Fox Special” French case, ornamented to match the famous Brooklyn Paramount Wurlitzer. This is the largest console type ever designed and built by Wurlitzer. Through the years, several rare sets of pipes have been added to the organ, including a massive set of 32′ wood diaphones (visible from the front of the building). As of today, the organ has over 6000 pipes. The massive quantities of wind required for operation are provided by four huge turbine blowers (visible from the outside of the building in the blower complex). The resulting instrument boasts 82 ranks, 17 tuned percussions and innumberable traps and effects.  It is not only the largest Wurlitzer theatre organ in the world, it’s the largest Theatre Pipe Organ of any type to ever be assembled!!!

And play it did!  What a wonderful, entertaining evening we had!  Everything from Phantom of the Opera to Christmas music was delightfully played...we were all mesmerized!  The pizza wasn't bad either ;-) 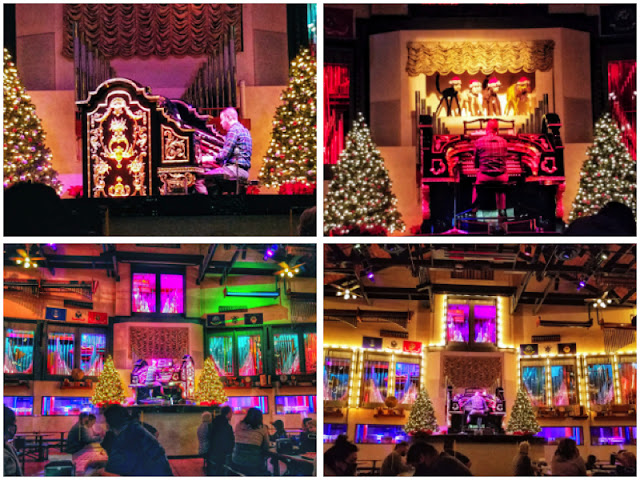 The last night of our campout we hosted the "final campfire", enjoying tales of how everyone spent their time here...hiking, going to see Christmas lights, to Barleen's Dinner Theater and scenic drives.  All in all, everyone seemed to have a great time and talked of when we can"all do it again!"

Until then, kicking back in Arizona,  Marie