Like I mentioned before...KC has a lot to see & do!  Just outside of the city, a suburb, is Independence where Harry S Truman's Library is and where Harley-Davidsons are made.  Both were worth going to see.

Of course I remember studying about President Truman in school, etc. but I really didn't know about him.  Now I sure do!  His was the first Presidential Library to be built, and what a wonderful one it is too.  We spent hours there, reading and seeing all they have to offer.

As you enter, you come face to face with an incredible mural painted by Thomas Hart Benton that is titled "Independence and the Opening of the West".  Absolutely beautiful.  You then walk into a maze of pictures, videos, timeline, memorabilia, and recreations, all telling you the what and why of his career.  Truman served as the 33rd President when Roosevelt died, from 1945-1953.  That decade was one of the most tumultuous times of America.  It was the conclusion of WWII, the start of the Cold War,  was a turning point in foreign affairs while the nation supported an internationalist foreign policy, in conjunction with European allies.  Truman's decision to use nuclear weapons against Japan led to a speedy end of the war but remains controversial.  He oversaw the Berlin Airlift in 1948 and the creation of NATO in 1949. When communist North Korea invaded South Korea in 1950, he immediately sent in U.S. troops and gained UN approval for the Korean War.  That's a whole lot more that many of the Presidents since then has had to deal with.  He took full responsibilities for his decisions with the motto "The Buck Stops Here" started by him.  He and his family are buried there as well.

I was truly moved.  It made me really appreciate what a good President can do.   I don't think we've had many candidates of this caliber since.

For something completely different, we also toured the Harley-Davidson plant.  This plant is a much smaller operation than what we experienced at the Toyota plant, but just as interesting.  This is where they make the Sportster, Dyna and VRSC models. They even showed us the new liquid-cooled Revolution powertrain for the VRSC V-Rod.  Pretty neat.  I found it interesting that there they used a number of robots to do the actual work, vs at the Toyota plant the robots assist workers doing the jobs. They even had models that we could sit on and pretend we were riding the scenic byways of America.  Thank goodness they were bolted down!  (no pictures allowed, darn!)  Vroom, vroom! 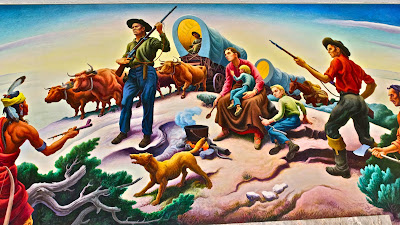 ...kicking back in Missouri, Marie
Posted by Marie