We needed to make a stop at a Camper World to have some work done on the rig, and Council Bluffs Iowa was the closest one to where we were at, so off we went!  The first thing one "sees" when arriving to this area are their very large, very strange art(?) posted at the four corners of the entrance bridge.  Wow, they take your breath away...and for us, not in a good way!  All we could voice was "what the??"  I called them "large foreboding Edward Scissorhands"!  When we asked a local what they called them, she said "ugly"!  She thought they were supposed to demonstrate "the conflict between man and machines".  I had to look them up, to strange for words...the artist, Albert Paley, simply calls them "Odyssey".  Go figure.  We soon found out that large "public art" was big (no pun intended) in Council Bluffs.  It was everywhere - some cool looking, some you just had to shake your head over, but notice them, you did!

Their "sister city" is Omaha Nebraska - both cities are connected by a single bridge across the Missouri River.  Omaha is much larger and more in line with what big cities usually look like.  Omaha is where Lewis & Clark began their trip on the Missouri River.  They have a really nice museum there that has a short movie and memorabilia about them.  They also have a Pedestrian Bridge that goes across the river, where you can put one foot in Nebraska and one foot in Iowa!  Of course we had to try it!  Great view and a nice looking bridge (vs Edward Scissorhands).  They too like their large public art, but theirs was aimed more at paying respect than "art for art's sake".  They did a great piece showcasing the labors that it's citizens do to create a city.  It's called "Labor" by Mathew Placzak.  Of course they included a blacksmith, so you know it was well thought out! ;-)

Council Bluffs did have a couple of fun places to visit, one being the Union Pacific Railroad Museum.  What a great job they did with that!  It's housed in an old (1903) Beaux Arts-style Library and covers three floors.  They had it all, movie clips, pictures, dioramas, "talking" filmed characters that was activated when you approached, artifacts, even a model of President Lincoln's private rail car!  I'm sure we were there for hours, but it didn't seem like it.  You know we love trains, and everything that has to do with them, so this was a real treat to see all the various components of operating a train.  I realized something while I was there, something I never really thought about before, and that was that for all the love I have about trains (as far back as I can remember), I've never really ridden on one!  Oh, I've done the short "scenic" train rides, but I have never actually taken a train to somewhere of any length.  I've added it to my "bucket list"!

Jack, on the other hand, has ridden lots of times.  When he was living in Philadelphia he took the train to Washington often.  "Men working on the train" brought back some great memories he had as a child.  His parents built a small beach house in Ocean City NJ that they went to for the summers and  weekends.  When he was around 11, he observed some men working on the tracks in a small yellow car (Chessie System Railroad Speeder) and walked up to them and asked to ride along!  They pulled him into the car with them and continued on with their work.  After that, he showed up every morning with a sack lunch, and they men would pull him on board and he would spend the day with them.  You could do that back in the '50's, especially in a small town like Ocean City!  He shared that story with the museum manager.  When we finished with the museum, I wanted to go across the street to a beautiful little park and take some pictures.  Jack drove the truck around to the other side of the museum, and guess what he found?  The exact same kind of little yellow car that he spent his summer with those workers on!!  He was so taken aback, as he's not seen one since.  I had never seen one, so it was fun for me to finally see this car that he's talked so fondly about.  Now, that's the frosting on a cake experience!
Bayliss Park was across the street and had some black squirrels that I wanted to take some pictures of.  We had first spotted them the day before and I couldn't believe my eyes!  I asked about them, and was told that yes, they were actually very black, and to their knowledge there are references to them going back to the town's beginnings.  I had to photograph one to share.  I soon found out that wasn't so easy, as they are really shy and run like heck anytime a person gets to close.  I got some, but not as close up as I would have liked.  The park also have the common ground squirrel (of course he didn't mind that I came close at all!) but they don't seem to mingle, even tho they live in the same area.
Of course the park also had some great "art"; at least these were functional and pretty! 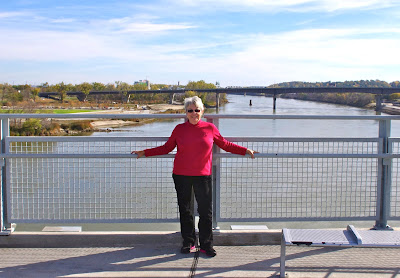 ...kicking back in Iowa/Nebraska,  Marie
Posted by Marie