A Quick Trip Through Nebraska!

On our quest to head west before the snow "catches" us, we traveled through the state of Nebraska, medium fast.  "Medium fast" is stopping here and there for something interesting, but not spending days at one place (just in case you didn't know!).  We had enough time to spend a few hours here and there, but didn't want to take the chance of taking to much time to put us behind.

One stop was a fascinating stop -  at Bailey Railroad Yard and Golden Spike Tower in North Platte.  Anyone who loves trains (the way we do) just had to make a stop here!  The Tower is 8 stories high that gives you a birds-eye view of the Bailey Yard.  The "Yard" is
where 10,000 cars are handled each day on 2,850 acres of land stretching out eight miles.  That's HUGE!!  It was hard for me to comprehend how big that is and how complicated a system it was.  Cars are moving in and out constantly, going east & west, in and out of the repair shop, and being fueled.  A 23-state rail system!  Lucky for us, there was a volunteer there to answer all our questions!  An "extra view" from this great tower, was a huge corn maze that was set up next door!  Pretty cool to see it from "above"!

One stop included a beautiful surprise -  at the Holiday RV Park in North Platte.  We stopped for the night, but got more than "rest".  Driving into the park we immediately saw that the park was surrounded with big, beautiful Cottonwood Trees, all painted in their fall colors of the various shades of yellow.  This was our first real taste of autumn.  Tons of leaves on the ground to crunch under our footsteps, cool fresh air to take deeps breaths of and then it added one more "beauty" - a gorgeous sunset!
One stop was a funny stop - at Carhenge in Alliance NE.  Carhenge is supposed to be a replica of Stonehenge made from 38 old cars, all painted gray and stuck deep into the ground.  It's one of those sites that you just have to "see it to believe it", so it was a must for us!  And well worth it, if for nothing else than a great chuckle for the day!  The story goes, that the sculpture, or more accurate the organizer,  Jim Reinders built it as a memorial to his father who used to have a farm on this site.  He and his relatives (35 of them!) got together and put the whole thing together with a big celebration on the summer solstice of 1987.  People like us stop and view it daily.  They have a souvineer shop with a snack shop on site (of course), but closed the day we stopped.  Darn, I could have gotten a T Shirt!  Oh, well, guess not this trip!  ha ha


And last but not least, one long view - of Prairies and Plains. They both looked pretty much the same to me, and I think that as we drove they would run one into the other and back again. Either way, it was different.  Long, low rolling hills (Prairies?) covered with what looked like sand and little Christmas trees (?) coupled with long, flat (as far as the eye could see) fields (Plains?) of harvested corn, hay or other crops.  Miles and miles and miles of them!

I think Nebraska is one of those states that we can consider viewed and enjoyed! 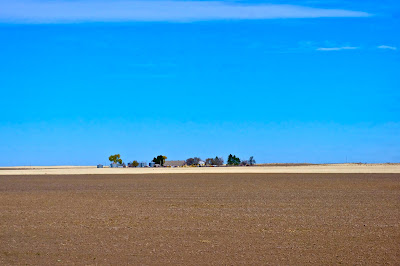 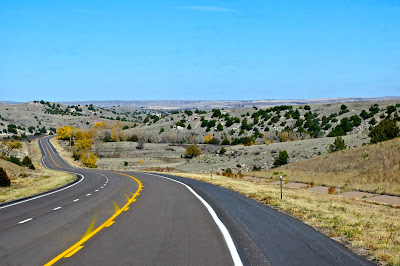 ...on the road through Nebraska,  Marie
Posted by Marie