When we lived in (a sticks & bricks house) Escondido, north of San Diego CA, October was always the "fire watch" month.  We never planed any travel from mid September to late October because for the last five years we lived there, three of them were filled with "October fires" within viewing distance from our home.  Many days & nights I spent by the phone waiting for the call, and by the tv watching the reports, with my boxes of special treasures and bags packed and the cars ready for a quick departure - "in case".  All to often the flames came to close for comfort, friends' homes and treasures were destroyed, our Wild Animal Park threatened.  Fires are a very real danger to us.

Our late summer plans were to spend August in Idaho and then September in Utah, as we have a special wedding to attend back in Montana in mid October.  As we were getting ready to leave my sister's in western Washington, we learned of the fires in Idaho.  Not good.  Back at the rig in eastern Washington, we got out the maps and turned the tv on to learn how bad and where the fires were burning.  Mostly northern Idaho and some in Utah now.  With that in mind, we decided it was best to stay around eastern Washington and "wait it out" a week and see how it went with the fires.  Well, it's been almost a month now, and the fires are still raging and have even included northern California.  sigh...

On the 'up-side', we've seen a lot of the eastern side of Washington that we've never seen before, and might not ever have!  My goodness, lots of lakes and rivers and fields and fields of "produce"!  First it was wheat, peas & corn, lots & lots of it.  Just as I was telling Jack that eastern Washington was known for it's apples and other fruit, and he was responding with "I haven't seen a fruit tree anywhere on this trip!" we turned around a bend and guess what?  Orchards, for miles and miles!  You could even smell the apples, the trees were so full, being picked daily, with fruit stand all along the roads!  How's that for an "ask and you shall receive" answer?  It sure is a pretty sight, I must say.  The eastern valley is now being interspersed with wine grapes as well, so the hills look like a nature-made quilt!

We've been lucky to getting camp sites all along the water.  One was right in front of  Spokane River in Nine Mile Falls.  The river's edge was right out our door and made for a beautiful view each day as we eat and read.  It gave us some gorgeous sunsets in the evening.  Next we stayed camped along side the Columbia River in Quincy, again, it was just outside our campsite. I caught a sunrise one morning (I'm not usually a morning person) coming over the ridge of the river, lovely.  Then we moved on to Soap Lake.  Didn't get a "front row site", but still a nice spot, with a lot of (Russian) company!  It's known for it's "healing" mud & waters, and it seems to be the popular place to be!

We made another discovery in our travels through eastern Washington - Dry Falls.  A little known ( we had never heard of it, and I bet most of you hadn't either!) "wonder".  Seems about 13,000 years ago during the ice age, glaciers blocked the Columbia River and forced it to find a new route. It and others in Idaho swelled and flooded and caused huge waterfalls; all this lasting only a few weeks.  When it subsided, it scoured eastern Washington and left dry channels (coulees).  The largest is Dry Falls, a 3 1/2 miles wide and over 400 ft tall group of scalloped cliffs, which at one time was the largest falls in the world. It was pretty impressive.  There were not big billboards advertising it ahead on the roads, no brochures at visitor centers, we just happened upon it along Hwy 2.  It had a nice sign with a great turn-off and a visitor's center and a food cart.  It was the mention of food that caught our eye to tell the truth - as there was none to be had for miles prior to that!  Once there, we were amazed to find such a sweet discovery!

Just goes to prove, life is full of wonderful surprises when you let it lead the way! 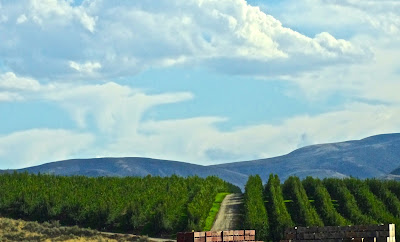 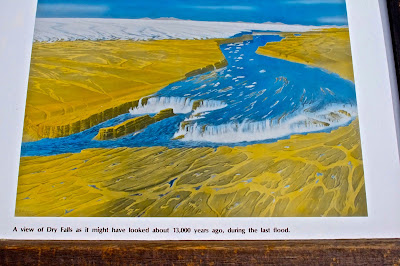 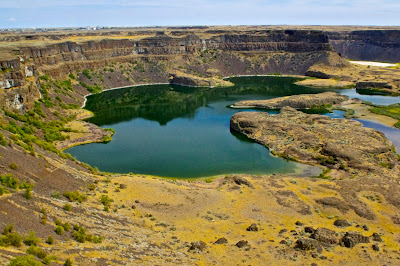 ...kicking back in Washington,  Marie