We've been spending time visiting family in Pennsylvania and in New York.  Our first stop was to catch Jack's cousin's daughter's wedding in Somerset PA over Independence Holiday weekend.  We booked ourselves into a campground near them for the four days and caught up with the family as much as we could.

It's been two years since we've been back here, so in between all the wedding arrangements, we tried to do as much "catching up" as possible.  After the actual wedding, we had a bit more time to spend with other cousins that the guys hadn't seen in years, and ones I hadn't met before, which was really nice.  Weddings are always such a fun time to to get together with old and new friends and family; sharing memories, making new ones... 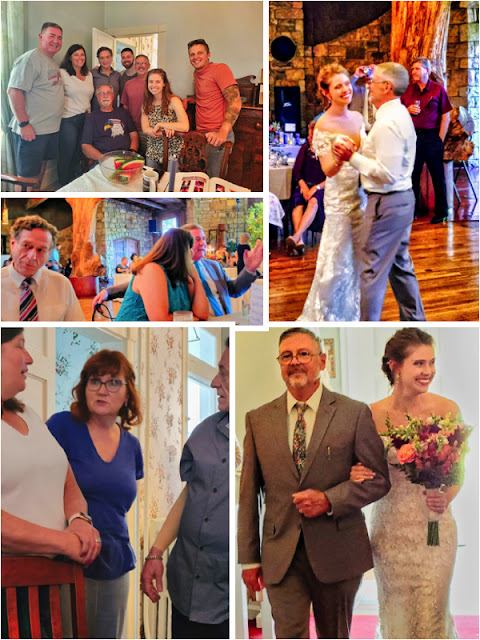 Additionally, the bride and groom were going on their honeymoon to locations that Jack and I knew very well (Grand Canyon, Zion & Bryce in Utah) and wanted as much "inside information" as we could give them as neither of them had been outside of Pennsylvania before!  Going there in mid-July was going to be quite a different experience for them!  I loaded them up with as much "advise" as I could think of!  ;-)

I, in turn, learned a couple of new things while here as well!  It seems that Western Pennsylvania has a unique wedding tradition called "The Cookie Table".  The brides family (and some) close friends bake the bride's favorite and/or special cookies and bring them to the wedding for the guests to take home in special bags.  I "Googled" this, and it seems that this tradition started in the Depression when brides couldn't always afford a wedding cake, so family and friends would bake her favorite cookies, ones maybe she would bake with her Mom or Grandmother, Aunts, etc. and have special meaning/memories for her, and that's what guests would have instead of the cake. The tradition has carried on (including the bridal cake now) and people come to really look forward to the cookies more than the cake!  Many, many dozens of cookies, each more beautiful than the next, displayed on tables for the guests to ooh and aah and pack into bags to take home.  Most to (almost) to pretty to eat!

The other thing I got to learn, even though I've seen it lots of times, is the game of Corn Hole!  One night, after a wonderful cookout, the family brought it out and suggested a game.  When I said we'd never played, they taught us...and guess what?  I won!  ...and, of course, I really like the game!  lol  I told Jack he needs to make us one when we get back home!  ;-) 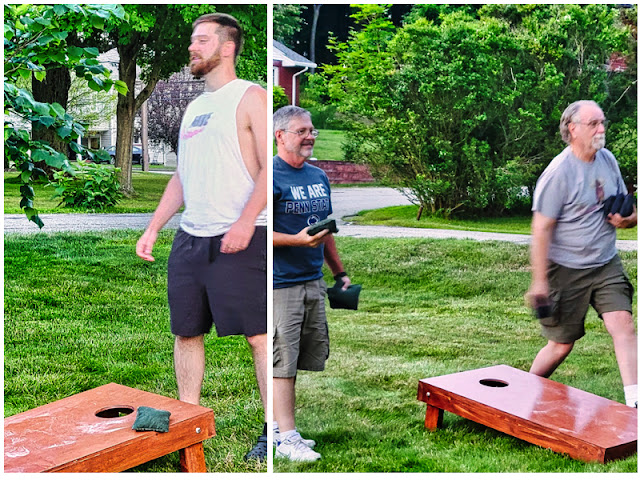 After we left his cousin's, we headed to New York to visit my son and grandchildren.  I was able to find a campground only about 15 minutes from my son's farm, so I was happy about that.  He works, so we planned it to arrive on a Thursday, so we would have the weekend, then during the week visit with my grandchildren.   My grandchildren live with their Mom and are ages 12-20, so old enough now for me to see them one at a time now, which is what I wanted to do this time.

Meeting up with each of my grandchildren for lunch and ice cream, a hike, a half-day visit, etc. worked out really well.  We got to have a nice talk without any of the others competing for attention.  Every other time it was always all of them (5 of them) teasing each other, or talking over each other, etc.  The oldest is working now as a welder, so we didn't see him, our oldest granddaughter is going off to her first year of college on a full scholarship and wants to be an elementary school teacher; the next grandson is getting his paperwork all ready as he wants to be a pilot, with the last two entering Jr. High and still in Elementary. 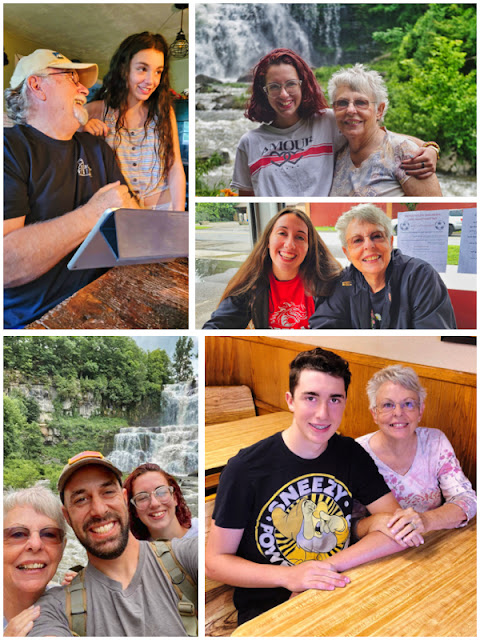 My son and daughter-in-law just bought two horses, so were super busy with all the challenges that come with that!  She was studying to take her state nursing exam (she passed!!) as she just finished getting that degree, besides working full time!  Busy, busy people!! 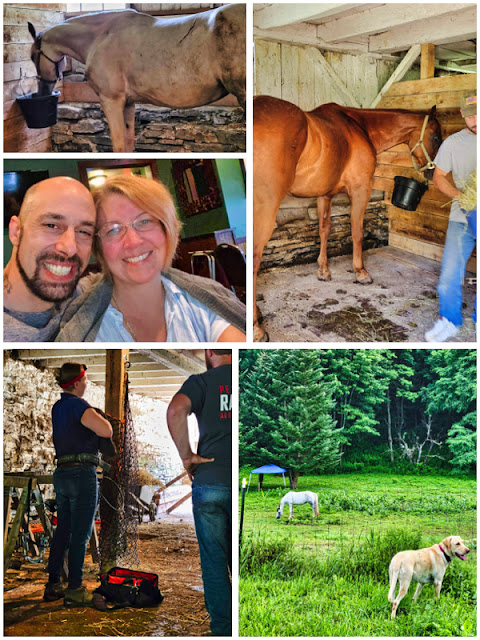 I keep telling her how great it would be to take that new nursing license and get an RV and hit the road as a traveling nurse!  We have friends who do that, not only enjoy it, but make great money doing it!  She's never been out of their tiny, tiny town of Norwich NY!  I told my son to start taking her on "vacations" to places (like Florida) so she can actually see what the ocean (among other things) looks like, etc!

After lots of long, loving hugs, we left there and drove back to Pennsylvania to visit with Jack's sister for a week.  This was a nice, relaxing "do nothing" week!  His sister spoils him...;-)  She knows all his favorite foods, and makes sure he gets them...fresh, hot (right out of the oven) pretzels, cheesesteaks, scrapple, and Birch beer.  He was in heaven!  We went out to dinner a few times, but he was happiest with his "favorites".   He and his brother-in-law Bob did a "guy day" and went to the U.S. Army Heritage and Education Center and viewed all the planes and tanks from WWII to the Vietnam War inside and out.  Kathy and I had planned on going to "high tea" at a local tea house, but learned that it had closed...so, instead, we found a lovely restaurant that she had been wanting to try and went there and had a fabulous lunch!  The rest of the time, all of us enjoyed relaxing and reading.  Some of her friends wanted to talk with us about our travels and our rig, so she invited them over and we had lovely chats with them. 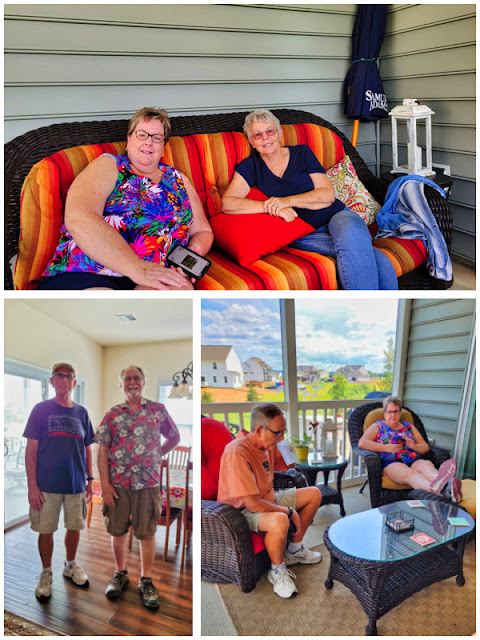 All to soon, our visit with them was up, and time to head on out.  Since we didn't get much one-on-one time with Jack's cousin, we decided to come back to John and Linda's for a few days before we ended the "family visits" for now.  No kids, just the four of us.  First thing we did was go out to a nice, quiet dinner!

Then, the guys headed out for a full day (just the two of them) to Cabela's!  They had to drive all the way to WV, but they didn't care, those two "gun and knife enthusiasts" would go hours to somewhere and spend hours there...which they did!  ;-)   I baked.  They did come back to take us ladies to dinner tho! ;-)

Of course they had to go try out their "new goods" at the gun range the next day...I cooked.  ;-)

Life is good...we are off tomorrow to West Virginia en route to Kentucky for awhile...to sit and relax!!!!