One of the things that Jack and I like to visit while we travel is State Capitols.  We found early on, that each State's Capitol can really reflect the time it was built, the people it represents, and the area of the country.   They are all so very different from each other, it's not only been fun to see them, but quite an education!

When we first started out, I only took pictures of the outside, not realizing how interesting or how important the insides were; boy was I wrong!  It was only later that I discovered that the history was really about the insides!   Who, what and why they put on the insides to impress and showcase, makes the Capitol what it is, otherwise, it's just a couple of "meeting rooms".  A good example of this is North Dakota.  Their Capitol is just that, a basic business building with meeting rooms for the Senate and House of Representatives along with offices for the Governor, etc.  Plain, no decor, straight business.  Only Capitol we've seen like that.

Most, however, are quite the opposite.  As were the two we just visited, first in Kansas (Topeka) and the second in Iowa (Des Moines). Both beautiful, lavish and full of great art.  Both were built during the late 1800's and have the refined Renaissance style that give the impression of strength and dignity combined with utility.  Both were built after the Civil War, but proud to be part of it, although on the "edge" of it, so to speak.  Both Lincoln supporters.  Both are supported by "country farmers" and their politicians are "part-time" and paid accordingly. 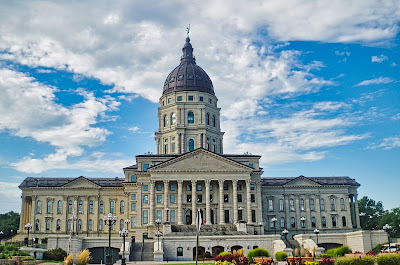 At the Kansas State Capitol, we were left on our own to view it.  Given a nice brochure and friendly greetings by the security staff.  We entered in the ground floor, which isn't unusual these days (after 9/11).  They use this "basement" area as gallery area,  This is where we found the State Seal, as well a chair made from the Cottonwood Tree (state tree), and John Brown's sword (the abolitionist). 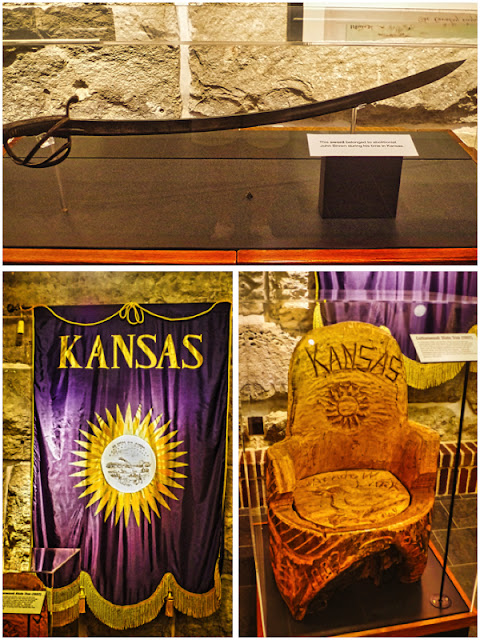 From there we moved up to first floor and got to admire the Rotunda and Overmyer murals.  One of my favorite things, is to look straight up to the Dome from the middle of the Rotunda!  It's always the highlight for me!  I love seeing what they put up there, what effort they have gone into. 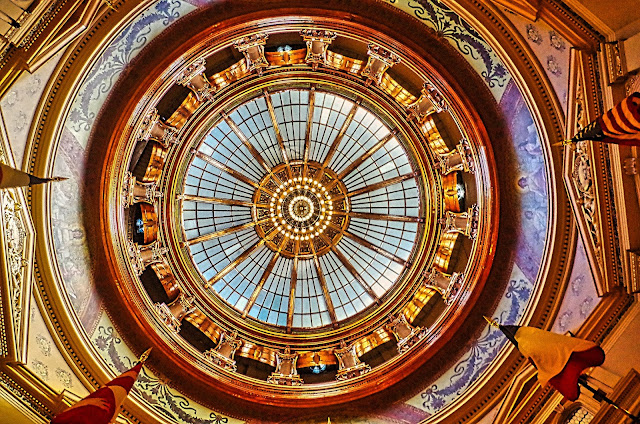 Surrounding the Rotunda were eight  beautiful murals painted by David H Overmyer of topics significant in Kansas history.  Adding to that, another large mural by John Steuart Curry created Tragic Prelude" featuring abolitionist John Brown, and "Kansas Pastoral", which depicts the life of the homesteader. 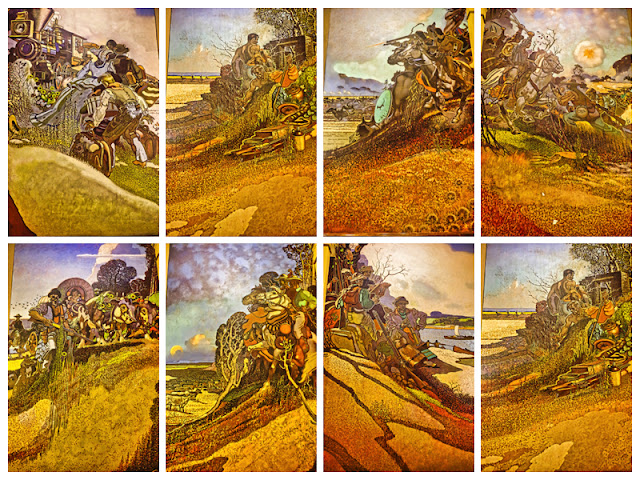 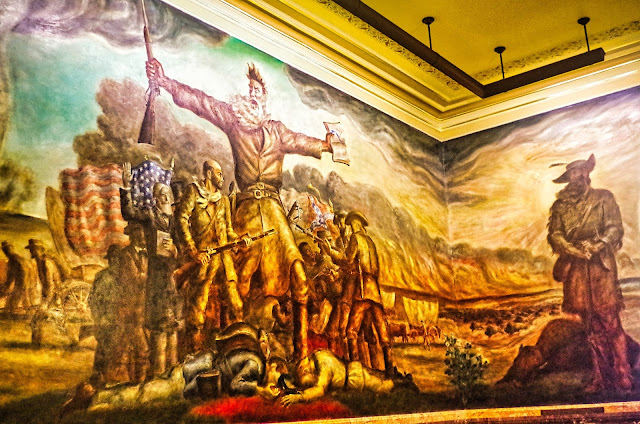 As with most Capitols, the Senate  and House of Representatives Rooms were impressive.  The House featured marble, gold leaf and pink columns made from a faux marble process.  Allegorical murals painted on the ceiling along with the names of 10 prominent figures from the Kansas Territory era.  The Senate chamber featured several types of marble, the original native Kansas wild cherry wood desks, and massive hand-cast columns with ornate circular grills that once encouraged air circulation. These were unbelievably beautiful, a combination of bronze, copper and silver, and with such detail! 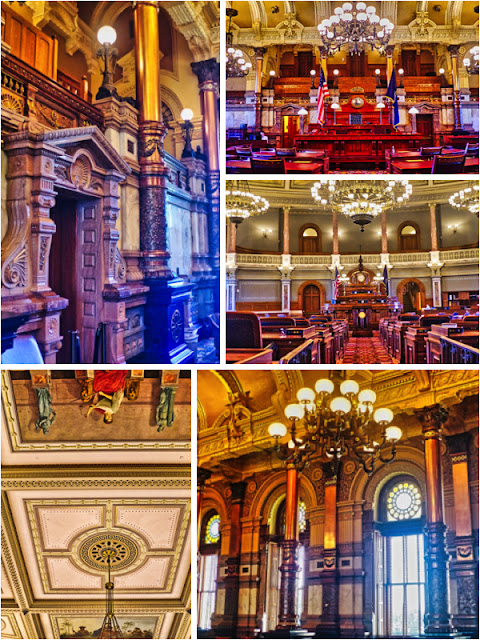 They had a nice Law Library, and other areas, but those are the "highlights", so I will move on to Iowa... 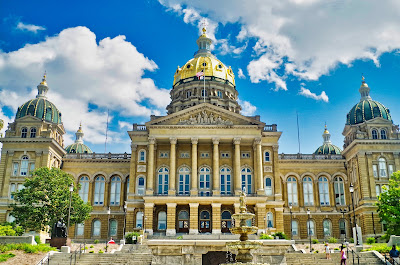 We lucked out and got an actual tour of the Iowa State Capitol!  I love it when they do that as you learn so much more that way!  Diana was a great guide and really took her time with us. Another unusual thing about this tour was that we actually got to go up to the Dome!  A first!  Because we had a couple that had done the tour the day before, but couldn't do the Dome (not sure why), they asked if it would be alright to start there so they wouldn't have to do the whole tour all over again - she agreed, so off we went!  Luckily we took the elevator up the 3 stories first, as the winding stairs to the Dome was another 97 (steep)!  Phew!  What a thrill though to look down for a change!  We still had quite a bit of the Dome above us, of course, but it was an interesting view to see the detail of the statues and paintings along the rim, as well as the banner that hung across it, closer. 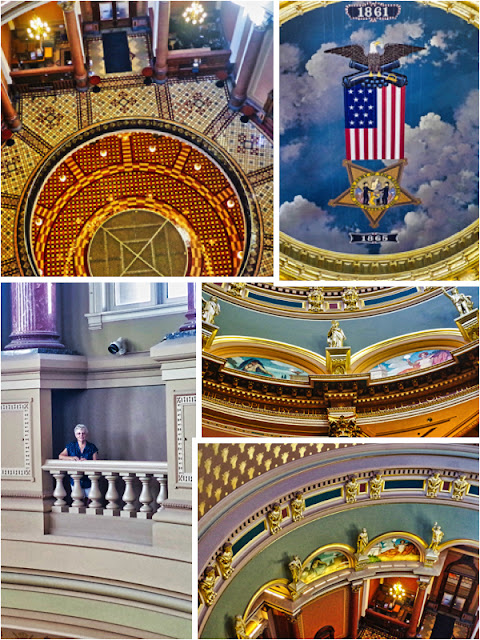 And the Dome from below looking up! 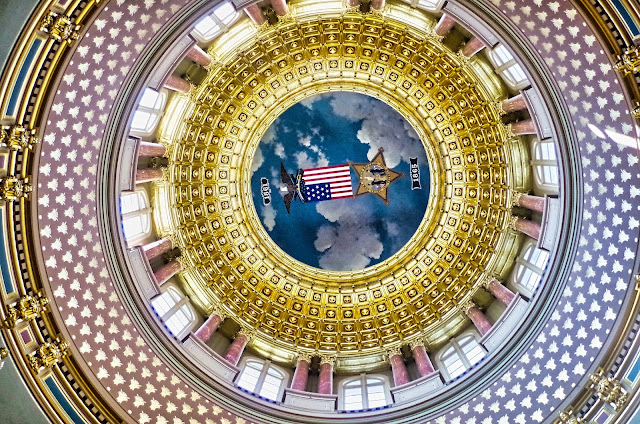 One of the things that impressed me about this Capitol was their attitude of "pay as you go".  As Diana explained it, that is one of the reasons it took 14 years for them to build the Capitol.  It's also the reason why many of the walls lay "bare" for years before they have art on them.  All that said, however, it's absolutely beautiful inside and out.  The Grand Staircase, made of granite, is one of the prettiest I've encountered, along with tile flooring set with wonderful designs throughout the three floors. 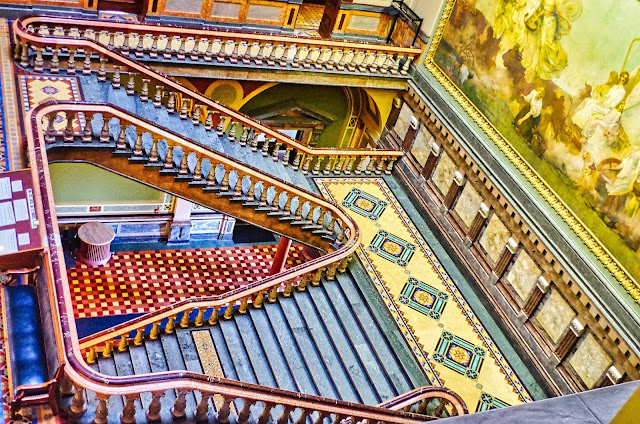 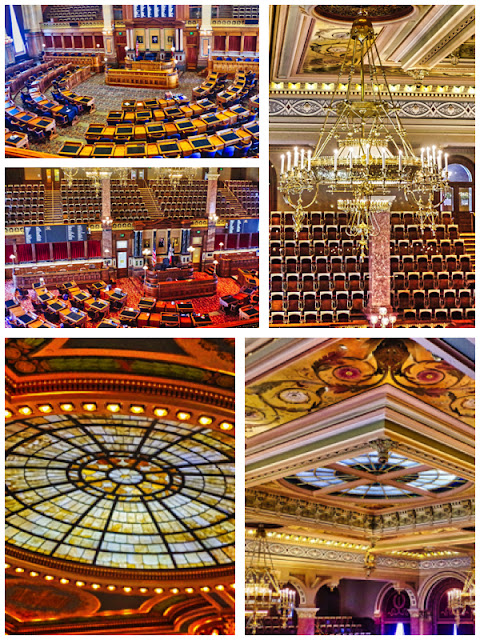 I have to say that he most impressive room was the Law Library though.  It was hard to capture it on camera, it was so large - five stories high, and two wings wide!  It reminded me of the pictures you see people post of "dream libraries" that you only fantasize about.  It was beautiful...

Diana explained that the spiral staircases (one at each end) were so old now that only the librarians were allowed to climb them.  They also had a few very rare "non-law" books on display in a showcase: a 14th century hand lettered book and a book printed in 1742 by Benjamin Franklin. 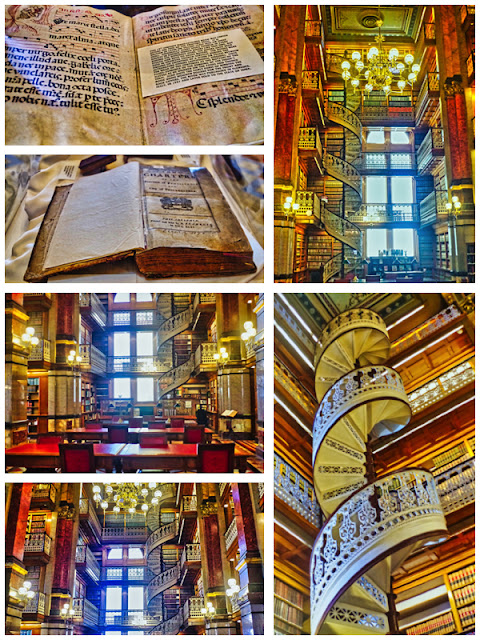 Both these Capitols were wonderful examples of our Country's pride.  Each taking care to showcase their State, while still representing the Country as a whole.  I'll leave off with this quote that Iowa had over one of it's doorway's that I thought was quite good... 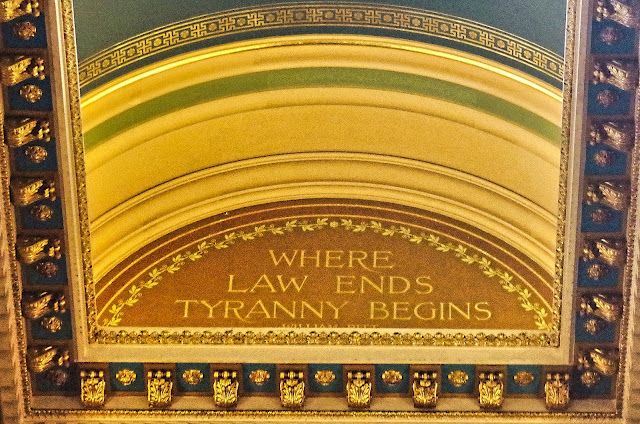 ...and now we are on the road in South Dakota,  Marie