It takes all kinds!

One of the pleasures of our travels have been staying as such a variety of places.  We've stayed at RV Parks that have been small family-run enterprises that were filled with activities for both the young and the not so young. Some tree-lined with gravel sites and some commercial ones that were very large with paved sites and little shade.  We've parked along rivers, parks, beaches, at a farm, at a service dealer's parking lot, next to a friend's home and in cities.  We've been able to listen to a jam session, a DJ, a bingo game, the rain and thunder and a great frog concert.  We've sat around wonderful log fires, watched tug boats along the shoreline, watched a light show, seen beautiful sunrises and sunsets, watched fireflies darting about, and had great conversations with fellow travelers.  Each special and unique.  However, all that said, I have to say that the park we selected in Ashland OR was the most unique one yet.

For those of you from my era, do you remember the 60's "hippie communes"?  "Love, Peace & Brotherhood".  Well, the Jackson Wellsprings RV Park is the closest thing to one that I have come across since then!  Now, I'm not saying that's bad, I'm just sharing that it's unique (in this day & age especially).  When I was researching places to stay for the few days we were planing to stay in the area, I had come across their website and it appeared like a nice modern park that had a great hot springs pool.  Soaking in a natural pool sounded good to me, so I gave them a call!  When I told her the type and size of our motorhome & toad, I asked her if that would be any problem, she said it wouldn't and to come in at any time before 11pm.

When we drove in on Monday, we were greeted by the camp hostess and told that the office wasn't open until 6pm, but that we could go ahead and park at our site until then.  She showed us our site and also explained that it was "ladies night" at the pool so I would have to be the one checking us in.

The site was a bit of a challenge, but Jack managed to pull it off ok.  The grounds were pretty rugged, to say the least.  Hard to describe.  More like a very large dirt area that had been leveled (at one time, a long time ago) and turned into a parking lot of sorts for the various modes of living accommodations.  Cable, power and water was strung up at each site, but even that was pretty hap-hazardly done, but nonetheless, it was available.  Our neighbors were friendly, at least the ones we saw.  "Sun Eagle" came by a couple of times to briefly chat.  Around us were trailers, some very old, some a bit newer, there were a few converted buses, old motorhomes, a yurt as well as some small cabins.  They were in the process of building or remodeling (I couldn't tell) the main lodge.

At 6:30pm I ventured over to the office to meet up with the personnel and see what was going on.  "Wisdom" was very nice and after taking payment shared about the hot spring.  She said it was "bathing suit optional" with lockers available in the adjacent room, and to "enjoy!"  I decided to join the other ladies and give my body a much needed relaxing soak.  At any given time, there were about 25 females from about 12 to 70 years old chatting, sitting, or just relaxing underneath the winter's sky.  While the building had sides and nice shower rooms, it didn't have a ceiling, so traversing from one area to another proved to be quite brisk!  Some hardy ones even went into the non-heated swimming pool!  "Not I" said this So Cal Chick!  After my soak and star gazing I did my best at finding my way back to our site.  There were no lights once you got beyond the lodge and with my tiny flashlight, all the various pathways looked pretty much the same.  After a few wrong turns, I finally spotted our rig!  How could I miss it, it was the biggest and brightest in the area!

This unique park brought us lots of giggles and fun stories to share with our families and one more experience to add to our adventure...you just never know what the next stop will bring, and that's the joy of this, after all, isn't it? 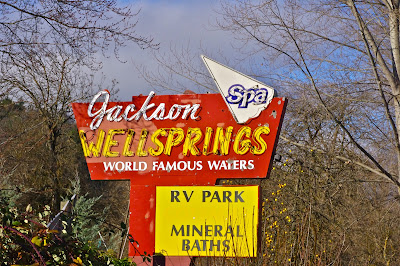