Kicking back in Desert Hot Springs...

We are currently "hanging out" in Desert Hot Springs CA for a few weeks, soaking up some nice warm sun (when the cold wind isn't blowing about).  This is a different experience for us, to stay in one campground, even one town, for several weeks (6 all together) at a time.  We've already met a couple of folks who will also be here about the same length of time, so maybe we will actually get an opportunity to establish an actual friendship with another couple!  We have "site neighbors" who are from Calgary Canada who, like us a year ago, just purchased their motorhome (which is one year newer than ours and one foot longer) and are brand new to the rv world.  They are heading pretty much along the same route we took last year as well, but can only stay in the U.S. 6 months, so won't get as far.  We spent a day with them, sharing some of our experiences, along with some campground recommendations and clubs to consider joining and not joining.  It was a funny sensation to be the "experienced" ones giving the advise instead of the ones seeking it!  What a difference a year makes, huh?  That's not to say we still don't have a ton to learn, boy, do we ever, but it's nice to know that we have learned quite a bit already and can pass that along to ones just starting out.  Kind of nice.  We shared that we were heading their way too - to Calgary in July for the annual Stampede.  They offered their "driveway" to camp if we so wanted.  rv folks, we have found, are the most generous around.  That's nice too.  I love this world we've joined.

On the couple of non-windy, beautiful sun-filled days, we've taken advantage and have explored a little of our surroundings and some of the events that take place here.  Thursday nights the city of Palm Springs closes off one of it's main streets and local vendors set up their booths, selling everything from art to vegetables.  Local musicians play while local artist quickly spray paint while you watch and everyone has a great time.  We had a nice dinner at one of the downtown restaurants (boy, I've missed fish tacos, and only So Cal can do them right!) then slowly wandered down the streets.  We only finished half before we decided it was getting late and we would just save the second half for next week since we were going to be here awhile.  Nice to be able to do that, I must say.

The weekend brought the College of the Desert's Street Fair.  It's huge!  Rows & rows of vendors selling clothes, accessories, decorations, jewelry, food, music, you name it, they were selling it!  Wow, fun.  That's where I got my first (this trip) date shake.  You just can't come to this desert without treating yourself to a date shake, it's the best!  Yummm

Then the wind came...I hunkered down and read.  A great book, by the way, Steve Jobs by Walter Isaacson.  I highly recommend it.  I have a much more appreciation and much better knowledge of the Apple/Mac/i world.

Two days later...the wind died down again, so off we went...to Joshua Tree National Park!  This was a little trip I was looking forward to, as I have been wanting to show it to Jack.  I've been here a number of times myself, but he has never, and it's quite unique.  It's been many years since I have been here, so I had mixed emotions - with apprehension that it may have been "tightened up" (protection from public miss-use) so much that it lost it's "fun", to the joy of seeing it again, remembering all the fun times there.

As soon as we drove into the park, and began to see the huge boulders and the funny trees that look like Dr Seuss's Truffula trees (from the Lorax) I began to smile.  Visions of my children running and playing among them filled my head.  When my boys were about 7 and Alissa around 12, we camped here in our Class C Motorhome.  We could park it right up next to an outcropping of those great big boulders and those boys would run and climb and jump and squeeze through the small separations, yell and just have a ball.  All the while, my "sophisticated" daughter, in her tidy braids would be sitting at the picnic table all prim and proper with her back to them reading her book.  Every now & then she would look back and give one of those oh my looks, and go back to her reading.  What a hoot.  It was such a great place to bring the kids because I didn't have to worry about them breaking anything or making any messes!  I never really worried that they would get hurt, as they were pretty surefooted and never really seemed to be prone to do that.  I didn't have much money in those days and camping was the one thing I could do with the kids that we could all do together and have fun.  I so wanted to create "good family memories" and share my love of the outdoors with them in the only way I really knew how.  Later that evening I called the boys and told them where we had been for the day, and when I asked them if they remembered going there, they each said "absolutely, fun times!"
Best feeling of the day.

As we left Joshua Tree, we exited through 29 Palms,  Cute little town that decided back in the late '90's to revitalize the town by having artists paint murals and create some sculptures throughout the town.  I love public art and especially murals, so this was a must stop for me.  We had a nice lunch while I reviewed the brochure, marking off the murals I wanted to photograph.  Jack, my wonderful driver, routed out each one and off we went!  Pretty cool murals I must admit!  Great little stop.

Well, that wraps up our first week here...for someone who "wasn't going to be doing anything", I'd say we've done quite a bit, wouldn't you? 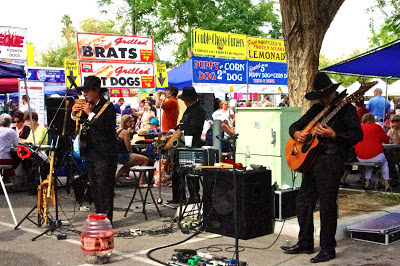 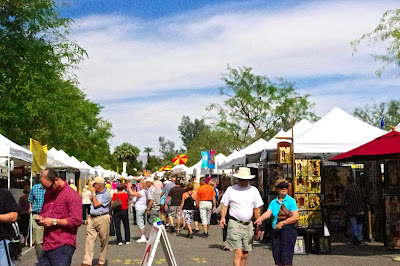 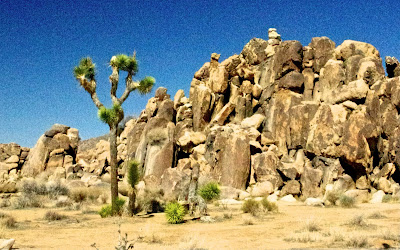 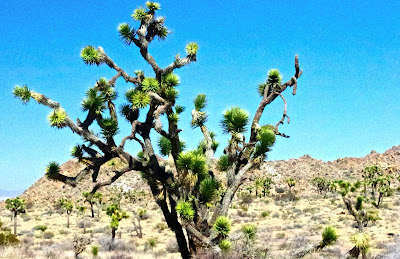 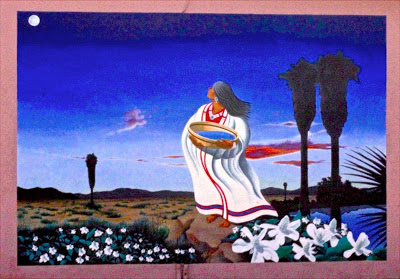 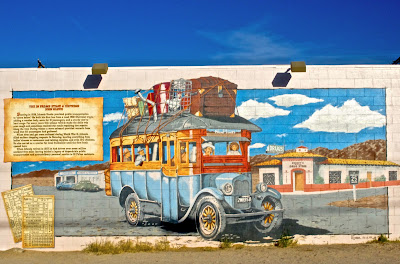