A flood is a horrible disaster to happen to any town, at any time.  But when it happens to a town that relies heavily on a specific event held once a year, just two weeks away, it’s a huge disaster!  That’s what happened to Calgary Canada this year.

The Calgary Stampede has been held here for over 100 years.  It’s huge, not just in size, but in tradition, in meaning to the town, to the folks that live here and to the ones who come here year after year.  The flood not only washed away roads, but buildings and electronics as well.  The Saddledome was so filled with water that it will be virtually unusable to use for quite some time.  All the headline entertainment was to be held there.

What does a city do when faced with such a disaster?  Well, if you are a Calgarian, you pull together and make it happen!  The city itself had it’s hands full just making the city safe and usable again, so it was up to the Stampede people to handle their own situation, and boy did they ever.  Hundreds of volunteers and Stampeded staff worked around the clock for two solid weeks, non-stop and made it happen.

When we first heard about the flood, we didn’t think the Stampede was going to happen.  It was an event we had planned on attending for months and was not only disappointed, but sad for our friends involved.  We had met Sherrie and Ken earlier this year when we camped out in the California desert and were kindly invited to come stay with them when we told them of our wish to see the Stampede.  Their daughter works for the Stampede and they live not to far from it.  We were thrilled to not only have new friends, but someone to share the experience with, so we made plans to come for our visit to Canada in July.  We kept in close contact and were surprised when they said that the Stampede was going to go on as planned!  The only thing that had to be cancelled was the headline entertainment because they didn’t have another venue large enough to replace the Saddledome, but all else was going on as scheduled.  We were thrilled, but wondered how it would all look.

As we drove into Calgary I kept looking for signs of the flood, but really couldn’t see any.  We arrived at our friend’s on Thursday, and our tickets were for Friday.  Driving into town, we were just amazed at how clean and neat everything was.  I (finally) saw one area that a small bridge was still washed out and hadn’t been repaired yet, but very little else.  It was amazing how much work this city had done to put it all back together!  As the week went by, and as we drove further out of the city, we saw river beds that had receded back and left the debris where the flood had brought it in and our friends told us of their country property that was still in a horrible mess with silt and trees and debris etc that they are working on, and will be for quite awhile, but even with that, it still is so much further along than anything I’ve ever seen in the US.  Canadians don’t mess around, they get right to it and fix it now.  We could learn from that.

The Stampede itself was WONDERFUL!  Sometimes, as I’m sure you’ve experienced, when you’ve looked forward to something for a long time, then when you actually get to go, your a bit disappointed.  Well, not this time.  When we arrived, we met up with Sherrie & Ken’s daughter, Chantelle, who gave us the VIP treatment (fun to be on the “other side” for a change!) and drove us in her little cart to the Stampede grounds.  Jack had never seen a live rodeo before, so that was first on our agenda for the day!

After taking us to the arena, she then took us up to the Grandstand's Sound Control Room where we got to see what they see and meet some of the crew.  From there we went and stood next to the railing to get the feeling of being “up close and personal” for a bit before we went and took our seats.  The rodeo riders come from all over the US and Canada and are the best of the best and compete for over 2 million dollars in prize money given out that week.

It was a couple of hours between the rodeo and the chuckwagon races, or “chucks” as they call them.  Canadians seem to abbreviate a lot of words and phrases I found.  Kind of cute.  Anyway, we then went and checked out the rest of the grounds.  It was set up pretty much like any county fair - rides, food, exhibits, etc.  After getting a bite to eat, I wanted to see how Canadian “exhibits” were like.  You know, all the gadgets and stuff that's for sale that “you just can’t live without and have to buy at the fair!”  Well, it had a lot of the “usual”, but it had a lot more “attire” than what we are used to at the San Diego County Fair.  And, being the Stampede, it was all Cowboy!  Hats, belts, belt buckles, boots, leather everything, shirts, and on and on.  Lots and lots of cowboy, other than that, nothing I hadn’t seen before...so, no new gadget for me this year, oh well.

We visited the First Nation of Treaty 7 Indian Village, complete with beautiful tipis and PowWow dancers in full regalia.  The Native Americans compete with each other on their tipis as well as their dancing.  It was really something to see.

Back at the Grandstands to catch the “Chucks” and what a sight!  I was a little disappointed that they had “downsized” the wagons, due to safety reason, a few years ago, but it was still fun to watch.  After the races they put on the most spectacular stage show I have ever seen - ever!  It will be very hard to describe, so you will have to go to my Flickr account and just take a look at the pictures...but what I can say is that hundreds of talented young guys & gals danced, sang, and did acrobatics.  They had all kinds of lights, floating mechanical horses, a piano that floated down from the sky, same with some cages with singers, flames bursting from the top of the stage, beautiful fireworks, and "KISS"!

All I can say is WOW!  We were so blown away by it all, and to think, two weeks earlier, all of that same area was under water... 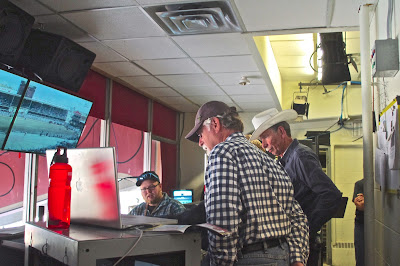 ...kicking back in Alberta Canada,  Marie