Sometimes it's nice to just sit back and go ahhh...

After we left the Badlands in South Dakota, we decided to slow down a bit and just "mosey" towards our friends in Montana and then on to Calgary where we are headed to catch the big Calgary Stampede before it ends July 15th.

The night before we left our campground at the Badlands we were saying goodbye to a couple we had met and doing the usual "where are you heading next? routine and when we said "Spearfish" (because it was about a 4 hour drive, which is our preference.  Immediately the response was "Spearfish!, are you doing the canyon?"  As typical of us, as well, "what canyon?"  Our new friends promptly got out a map and showed us where it was and then shared what a beautiful scenic drive it was as well.  We thanked them and added it to our "list" and decided that we should then probably stay in Spearfish two days!

That evening, while talking about Spearfish, Jack remembered that someone else had told us about a City Park there that you can camp at that was really special.  We looked it up and found it, so I called and was able to get us two nights (this is now the two days before Independence Day!)

As we pulled into the City of Spearfish Campground we were in awe.  What a beauty!  It is right in town, attached to the Fish Hatchery, filled with trees, a creek, lots of lush green grass and lovely sites.  You can walk to town, if you don't mind walking about 10+ blocks.  Another place we would have loved to stay longer, "if only".

The next day, off we drove to check out the Spearfish Canyon!  What a treat it was too!  Glad we did it in the truck.  We could have done it in the RV, but parking would have been a challenge, especially at this time of year, as there were plenty of others enjoying the drive with us.  Several nice waterfalls to see, even though their flow is a lot less than in spring (or when they have had more rain than this year).  The canyon walls are beautiful to look at and really, really steep.  Lots of variety in trees and terrain.  We were glad for the suggestion.

We also decided to take a quick trip to Deadwood for the fun of it.  It was ok for an afternoon.  Pretty much what we expected...a lot of "saloons" and tourist stores.  Some nice old buildings, which I like.  We had a nice lunch, walked around a bit, took a few photos, then left.  They charged to go into the cemetery where Wild Bill Hickcock is buried, so we nixed that, we've seen plots before.

On to Montana.  We spent the 4th in a little town called Hardin.  Flat land, filled with barley on one side and sugar beets on the other, as far as the eyes could see.  Not much happening in Hardin.  The local Rainbow Girls came out to the campground each night and sold ice cream sundaes, so we "contributed" to their cause and enjoyed talking to the other campers.  Met some really interesting folks.  Learned about how the sugar factory closed down in Hardin and moved to Billings, now they not only have that smell, but the oil refinery smell too!  Met a gentleman who represents the cattleman's association and learned a lot about how many acres per cow it takes, how big those hay bundles are, how expensive the balers are, and all kinds of fun stuff!  We were able to see 5 different fireworks from our little perch across that barley field.  It might be a small town, but it had a lot of patriotism.

Before meeting up with our friends in Missoula, we pulled into another small town, Big Timber.  I found another gem of a campground, that once again, would have stayed here another week, "if only"!  Spring Creek Campground & Trout Ranch is a real treat.  Hidden behind a strand of trees, that you wouldn't even know it was here if you weren't given directions (you need them because GPS only gets you lost!).  Two nice ponds for the kids to fish in, a big fast moving, beautiful river that our site was right in front of, nice trees, etc.  Super friendly people.  They had a pot luck the first night we arrived and everyone was so friendly, mixed and mingled, brought all kinds of extra food (just to make sure).  We added a day just because we didn't want to leave!  There was a bench just on the edge of the river that I would sit my rocker at and prop my feet on and just read and gaze out at the river and listen to the birds, wave at the fishermen as their boats went by and relax...

Now that's the things that just make you go ahhh... 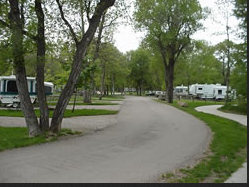 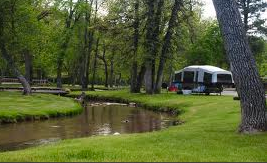 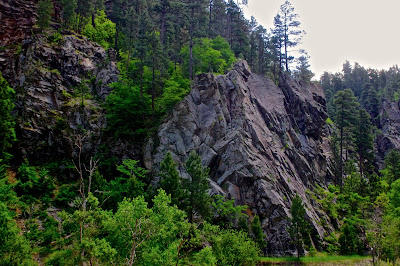 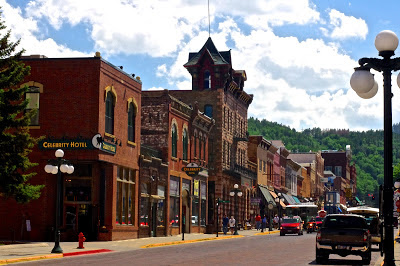