To think it all started with a free glass of water...

One thing great about the RV community is that it is one.  No one is a stranger and everyone is friendly.  At the very least you always get a friendly greeting on the road, at gas stations and while at camp.  Often you get into conversations of where you’ve been and where your headed.  This always leads to ‘favorites’ and “have you been to...?” with wonderful suggestions and good for-warnings.

When you hear from many campers to “be sure and see...” I put it on our ‘must do’ list!  One such place was Wall Drug, in Wall South Dakota.  Anytime we mentioned that we were going to be anywhere even near South Dakota, the response was always “oh, you’ve got to go see Wall Drug Store then!”  Well, ok then.  So, we did.

After the visit to Devils Tower, I booked us into the Hart Ranch in Rapid City (because it is part of our RPI membership) which is about an hour away.  We didn’t really know what to expect and even tried to guess on the drive out to it.  To add to the anticipation, Wall Drug has fun signs posted about every half mile all along the way!  They began to prepare us for the fun that is Wall Drug.

I’m almost tempted to just tell you that you have to experience it for yourself and leave it at that...but I won’t be that cruel.  It is going to be hard to describe tho, but I’ll try.

First, let’s start with a little history:  “Wall” is the name of the town, not the owners...and it’s a really small town, out in the middle of nowhere, even now, so try to imagine it back in 1931(326 ppl)...in December...on the edge of the Badlands in South Dakota.  Brrr  This crazy couple, Dorothy and Ted Hustead (and small son) decided that they wanted to open up a small drug store.  Mount Rushmore was being built and tourists would soon be driving by to see it...and stop, or so they thought.  No one stopped.  They decided to give it five years.  In the summer of 1936 their five-year trial was closing in.  One hot Sunday in July, in the deadening heat Dorothy had an idea.  As she watched all the cars driving by, she thought after driving across that hot prairie, they're thirsty, “what they really want right now is ice cold water!”  Now, they had plenty of ice and water, so she told her husband that they needed to put up signs all along the highway telling people to come there for free ice water!  They modeled them after the old Burma Shave signs, and the tourists showed up, by the hundreds!  At first, just for the free ice water, but soon, they asked to buy ice cream too.  The rest, as they say, is history.  The Hustead’s turned free ice water into a family billion dollar business.  He has a statement in his brochure that I really like - “ Free Ice Water.  It brought us Husteads a long way and it taught me my greatest lesson, and that’s that there’s absolutely no place on God’s earth that’s Godforsaken.  No matter where you live, you can succeed, because wherever you are, you can reach out to other people with something that they need!”

Ok, so that’s how it started, today, it’s a multi-complex of buildings a block long and wide with shops and activities for all ages! So big that they give you a map to help you figure out where everything is.  Of course there is a place to eat, the Western Art Gallery Cafe, and a gas station, along with every kind of gift shop imaginable - those are to be expected.  But, the unexpected is the fun stuff, like the Travelers Chapel in case you need to pray, different statues for 'photo ops' or the various activities for the kids, like panning for gold, or playing in the water at the train station, or how about some of the mechanical entertainments like T-Rex that goes off about every 12 minutes, or the cowboy campers singing around the campfire?  I could go on and on, but I think you can get at least some of the picture, and oh yes, there is still the original drug store tucked in among all this, and yes...a free ice water station! 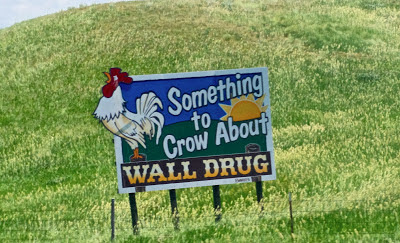 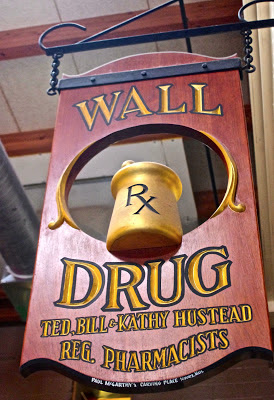