A Few Days With Friends...

Well...looking over my posts, I discovered I never posted this one! Sheesh!  Don't know how that happened...now, here we are back in Missoula...so guess it's as good a time to post it as any!

Missoula is always a favorite stop for us because it means we get to spend time with dear friends.  As many times as we have made the stop we haven't really strayed much.  This time, being summer time, and a few more things going on, we did...

An afternoon trip took us to the Daly Mansion in the Bitterroot area.  Marcus Daly was the local copper magnate, who, as an Irish immigrant, started out as a silver miner.  Later, married one of the owner's daughters and worked his way into part ownership of a silver mine.  He sold that interest and bought another silver mine that later hit a vein of copper.  Copper was just coming into use for telegraph wire and electricity.  Daly was friends with Hearst, and more than once he had helped him with financial backing.  He did again with building a smelter.  By 1890, the copper mines of Butte were producing over seventeen million dollars worth of copper a year, and Marcus Daly, although a junior partner in the Anaconda venture, had become a very rich man.

The mansion, as you can imagine is beautiful.  They didn't allow any pictures, so I was only able to sneak a couple, but the tour was fun and a great treat with our friends!  Over the weekend the Celtic Festival was in town sharing their wonderful music, dance and food with the locals (and us tourists).  We were able to catch the Missoula Irish Dancers who did  a great job, especially those wee little ones!  We spent most that day tho enjoying the local Farmer's Market.  One of the real joys of traveling the way we do is to take advantage of local grown food.  That's the up side, the down side is that often times it's sold in such large quantities (for canning or big families & refrigerators) or at small roadside carts that don't have the space for rigs like ours to pull over.  Such was the case as we drove around Flathead Lake en route to Missoula (beautiful lake, by the way).  Their local cherries were being sold all along the road - but there was absolutely no place where we could pull over!  So, I was on the 'look out' for those cherries!  Well, wouldn't you just know it, they were all sold out by the time we got there!  As it turned out, not all was lost, I was still able to find some, near where we were camped and they were well worth the search, "local Flathead cherries" are sweet and delicious, like none I've tasted before, yum!

Our friends are nose-deep in wedding arrangements with their only child, so we had a couple of days on our own - but with plenty of suggestions to keep us busy while they tasted cakes & made plans!  One such place was the St Ignatius Mission.  From the outside, it looks like just another quaint brick Catholic Church, nothing to catch your eye and stop for.  Not so.  The church itself was built in the late 1800s, and built well with local hand made brick.  That's nice.  But it's what's inside that blows your mind.  Seems that among the Brother's that ran it, one was the cook, but in his "spare time", he liked to paint.  He never had any formal lessons, but, non the less, "with God's guidance", he did...and did he ever!  He filled that church with some of the most beautiful frescoes this side of Italy!  Brother Joseph Carignano painted 61 scenes on the church walls with religious similes: a pictorial study of scripture stories and symbols of the liturgy. His intent was to inspire people to imitate the lives of the saints and reflect on the teachings of Jesus.  Breathtakingly beautiful.

Always time for a stop at our favorite haunt, Rockin Rudy's and some new finds at a couple of great books stores that we lost many hours in and came away with an armload of more good reading material, and swoosh the weekend was gone!

A nice dinner and a warm goodbye for now, as we will be back again for the big wedding in  October! 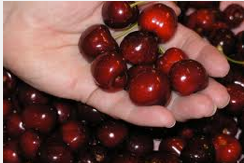 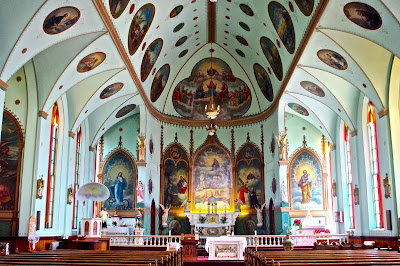