Saying goodbye to Tennessee and hello to Virginia...

As we left the area around Gatlinburg, we still had a couple of stops I wanted to make before we left the beautiful state of Tennessee...A couple of "must sees" on my list!

You know how we like to visit "factory tours", or at least see where, if not how, things are made!  Well, Bush's Best Beans are made in Chestnut Hill Tennessee, not all that far from where we were headed, how about that!  So, off we went!  Unfortunately, they didn't offer a factory tour, but they did have a great Visitor's Center, that included a wonderful museum of sorts that told you their history and showed about "how it all started" and how's it's done!  We probably spent an hour or more there, going through it all.  We even got ourselves weighed in beans!  Lots of opportunities to get your picture taken (they even give you a free one to take with you!)  One of the surprising things, I thought, was that they didn't start out in the "bean" business!  Did you know that?  They actually started out in the "canning" business...and by hand, at that!  Each one was soldered individually by hand.  They canned tomatoes, and other vegetables long before they discovered that beans were the way of the future.

They started canning tomatoes in 1904, and didn't start canning beans until 1969!  They are still a family owned and operated business.  It was a fun stop, and now we know more about beans than we ever new before! 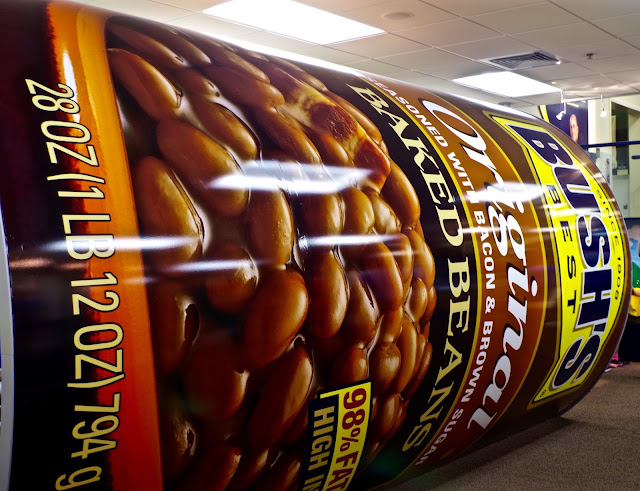 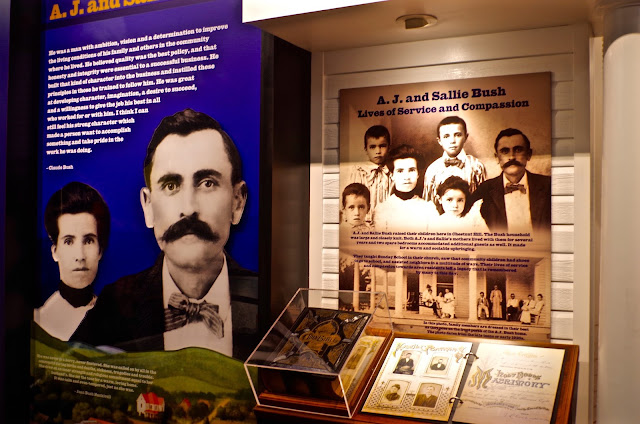 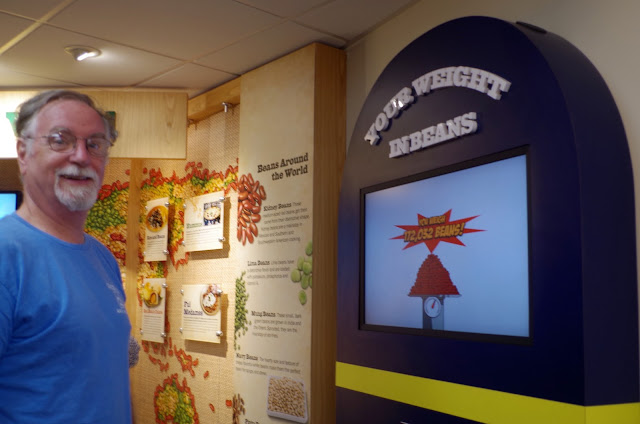 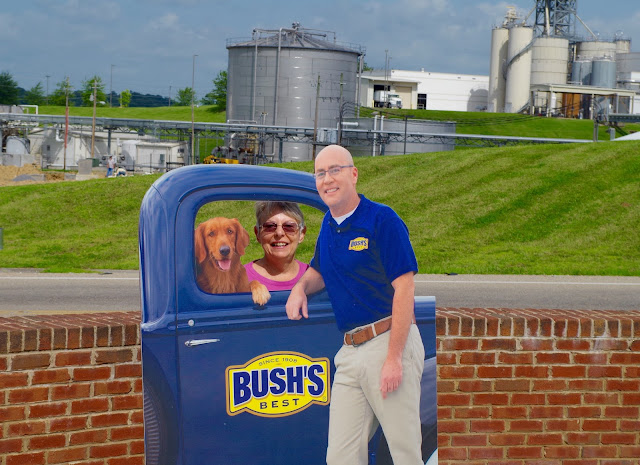 As we continued north, we came to the town of Harrogate, where the Abraham Lincoln Library & Museum is located.  He's my most favorite President, and I was so glad to finally be near enough to get to his library!  It's actually on the grounds of the Lincoln Memorial University, which is interesting.  It's a small library, but done very nicely.  It had some furniture, and Mary Todd's china along with some of their clothing.  But mostly it was paintings of him, maps of the time, speeches he made, and lots about the Civil War of course.  I loved one note from the gentleman who ran the telegraph office that said he got to know the President "on a personal level" since he came every day, and stayed there most all day long, writing/composing.  Once, he remembered, he would sit, write a line or two, then look out for long moments and ponder, then write another line, and then ponder some more.  He asked the President what he was writing about, and he answered, "I'm writing a speech to end the war".  It turned out to the the Gettysburg Address.  Wow. 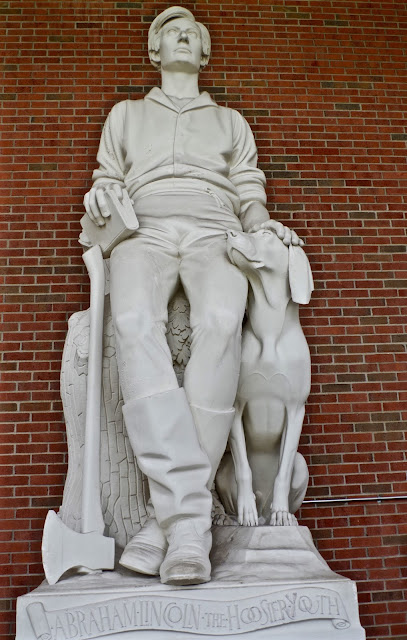 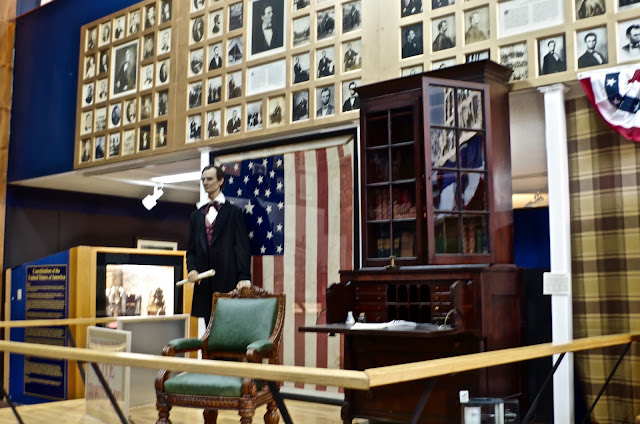 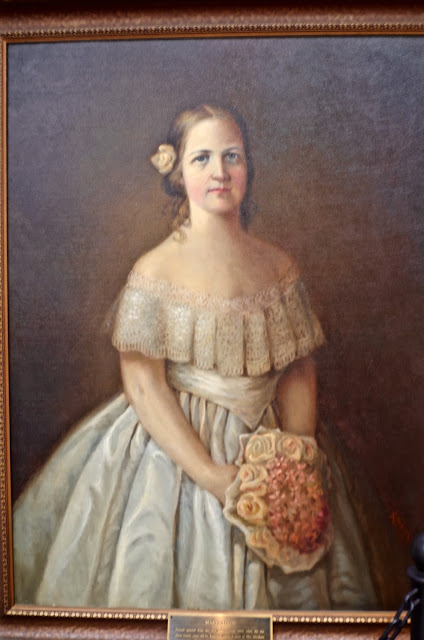 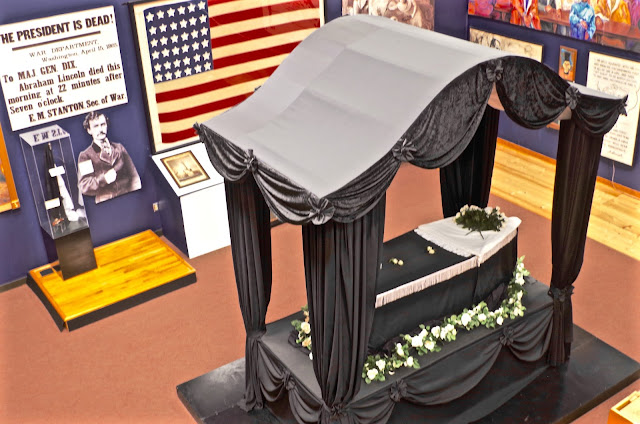 Our last stop we ended our stay at, and that was at The Cumberland Gap National Historical Park.  The Cumberland Gap itself covers three states:  Tennessee, Virginia and Kentucky.  Depending on the drive, and the moment, you could be in any of the three states!  Our campground was in Virginia, the Cumberland Gap National Park Visitor's Center was in Tennessee, and the grocery store down the street was in Kentucky!  ;-)  What a beautiful place though!  We thought we would spend a couple of days there at their National Park Campground, and ended up spending a full week.  Most of the time we were only one of maybe 4 other campers in the whole park!  The only time it ever got busy was on Saturday, when "weekenders" came in, and they brought in a great bluegrass group for our evening entertainment, then the place was hopping!

We spent several days just driving through the many thousands of acres of beautiful forests, hills, rock formations, wildflowers, valleys and great vistas.  We had a few rainy days where we just sat back and read our books and enjoyed the sights and sounds of the quiet nature around us.  The campground was gorgeous in and of itself, it was hard to leave it. 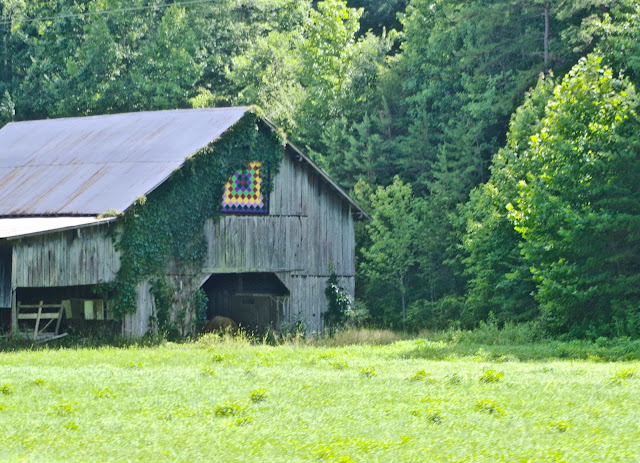 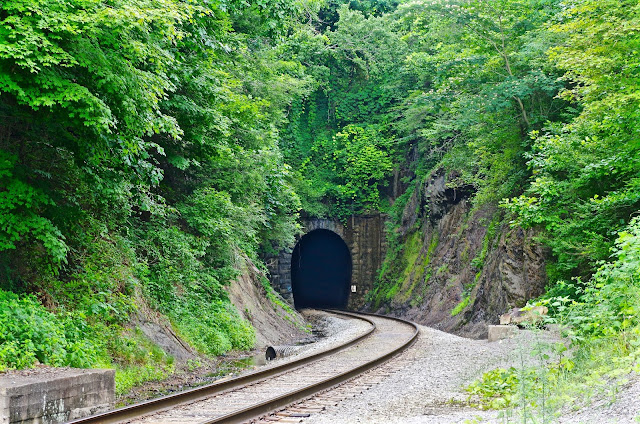 Eventually, it was time to "break camp" and move on...through West Virginia (which, by the way, have very few campgrounds!) and on to Pennsylvania to visit with family for a bit!