Eastern Tennessee and western North Carolina rise up to greet each other in a mighty panorama of rugged mountain peaks along the southern spine of the Appalachian Mountains.  Wave upon wave of mountain ridges are separated by deep valleys.  This amazing natural landscape has been preserved for all of us to enjoy.  The Great Smoky Mountains National Park is the most visited national park within the US, with almost ten million visitors a year.  Its two main entrances are from Cherokee, NC and from Gatlinburg, TN next door to Pigeon Forge and Sevierville where we entered it from.  Covering over 520,000 acres, the Great Smoky Mountains National Park ranges from the pastoral meadows of Cades Cove, which measures 840 feet above sea leavel at its lowest point, up to Clingmans Dome, the park's highest peak at 6,643 feet.  The Great Smoky Mountains has over 36 miles of continuous mountain ranges reaching heights above 5,000 feet, making it the largest stretch of high land in the eastern US.

The Great Smoky Mountains is one of the oldest mountain ranges in the world.  Worn down over time, its peaks are now covered with an abundant carpet of trees, pines, shrubs and plants.  Over 100 species of native trees and more than 1500 flowering plant species can be found in the Smokies.

Birthed during the Great Depression, the Great Smoky Mountains National Park was officially established by the US Congress on June 15, 1934, and dedicated by President Franklin D Roosevelt at Newfound Gap in 1940.  This particular park was carved from the homesteads of families as well as the forced closure of logging businesses.  All the land had to be bought and paid for; school children of the time even donated their lunch pennies.  A number of historical homes and farms have been preserved to represent the hard-working early settlers.

Unlike a lot of other national parks (Yellowstone, for instance) there are not a lot of wild life roaming around for visitors to view easily.  There are estimated to be 1500 black bear, along with a small herd of about 130 elk.  After nearly vanishing from the eastern US by the mid-1960s as a result of widespread pesticide use, peregrine falcon reintroduction efforts in the Smokies have resulted in recovery of a small population in the park.  River otters were also reintroduced in the park after a 70-year absence.  But...it does have over 200 species of birds, 66 types of mammals, 50 fish species, 39 varieties of reptiles and 43 species of amphibians!  ;-)

We were just excited to see a young bear trying to cross the road in front of us!  Once he saw us, he quickly scurried away though...(but we did get to see him!) 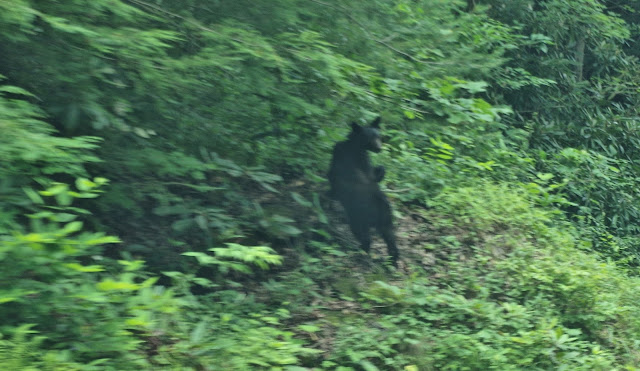 One of the things I wanted to "see for myself" was if the mountains really did look blue "in person", like all the pictures showed!  I had seen lots of ads for the Great Smoky Mountains, and they always showed the iconic scene of the mountain range all misty in shades of blue.  I'd always wondered if that was done on a certain day early on a fall morning, when the weather was "just right", and that it wasn't something one sees very often.  So, when we arrived and got set up in our campground, I was anxious to "go to the mountains"!

Doing my research, I learned that there are several driving tours of the Smokies you can take, each one taking a full day, and each very different from the other.  So, we decided to do the Newfound Gap Road first.  This one was more "natural sights" vs "man-made" sights.  It also started at the lowest elevation and took you to the highest.  This gave us the best view of those "blue mountains"...and yes, the views are blue!  ...and beautiful, really beautiful.  It made me just want to stand there and stare at them forever...I really was in awe.  I've really never seen anything quite like it before.  It's almost mystical... 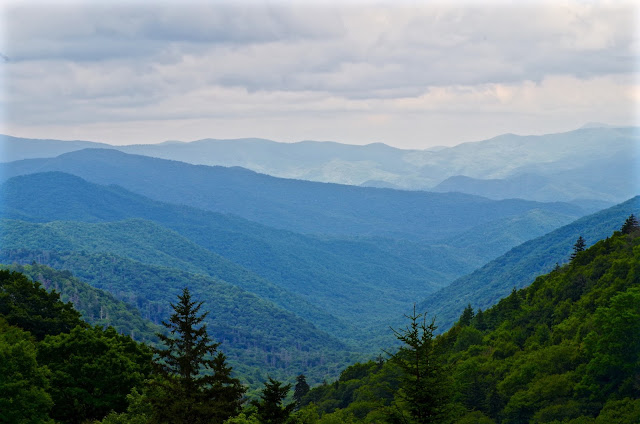 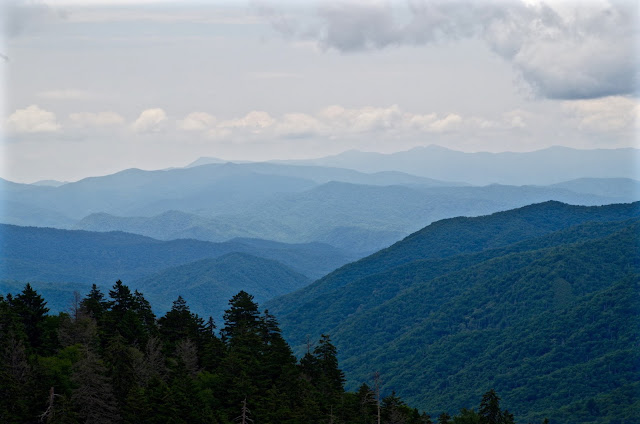 But, one must move on... after all, there were other sights to see here... 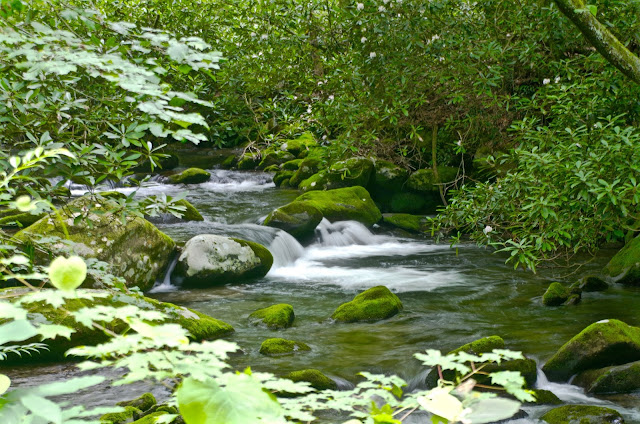 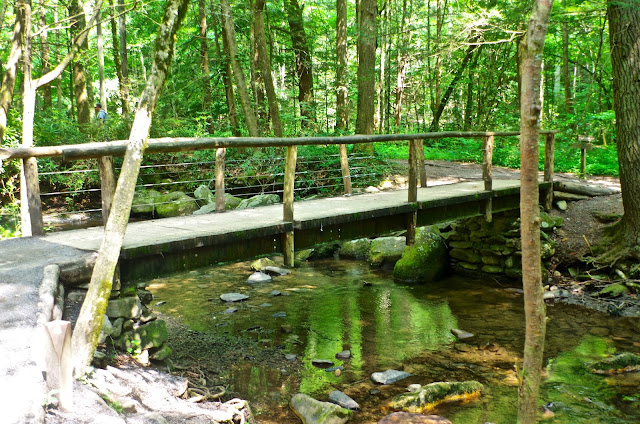 Our second trip was into Cades Cove.  This secluded, flat little valley is only 4000 acres in size and is sheltered by the mountain ridges.  It's a wonderful 11-mile, one-way loop that follows the outer edge of the cove through intermittent woods, sheltered fields and historical buildings. 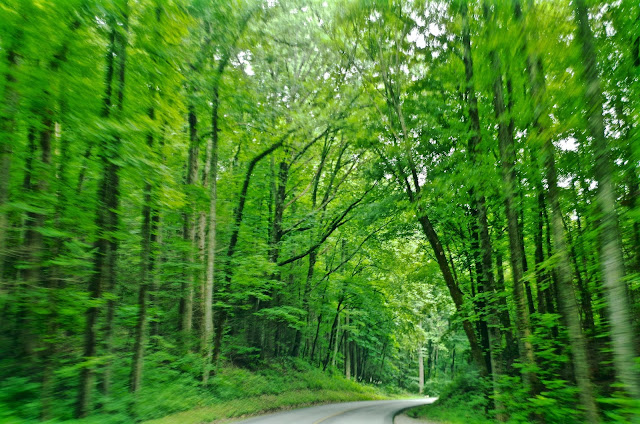 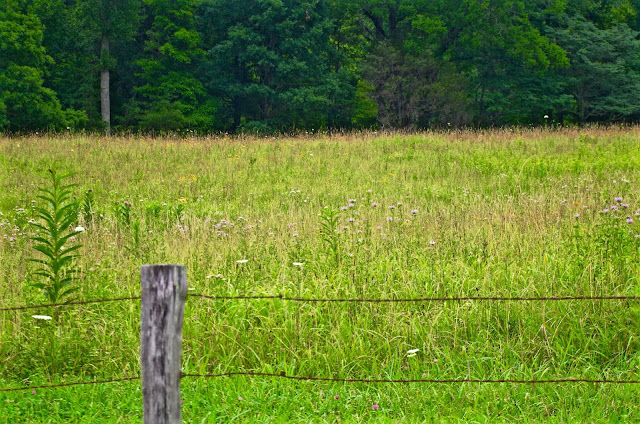 By the mid 1800s there were 132 families (about 500 people) farming the precious flat land in the cove.  Today, Cades Cove is home to one of the most complete collections of historic structures in Southern Appalachia, letting visitors see firsthand how people subsistence-farmed and lived off the land.  Early churches, homes, mills, barns and even cemeteries are left just as there were.

Each tour came with a self-guiding tour booklet that told you all about each stop, which was wonderful.  I especially enjoyed the one for Cades Cove because it shared all the personal stories about each of the houses and the people who had lived in them.  My favorite was the Walker home (1841-1921).   John and his wife had 11 children.  Six of the children were girls,five never married.  Eventually the home passed along to them and they all stayed in it together.  In the 1930s, the commission responsible for acquiring land for the Great Smoky Mountains National Park unsuccessfully attempted to persuade the Walker sisters to sell the homestead.  To avoid negative publicity, the commission finally opted not to force the Walkers off via eminent domain.  The Walker sisters eventually sold the farm in 1941 in exchange for a lifetime lease.  Legend claims the sisters were paid a visit by President Franklin Roosevelt, who convinced them to sell the land.   (don't you just love it!)


As I've said after every visit to a National Park, thank you, thank you to our fore fathers for saving these beautiful lands for us, and our children and their children to enjoy!

...kicking back in Tennessee,  Marie