A Whirlwind Vist of Washington DC!

When you only have five days to "do the DC area" of Washington, you really have to cram a lot in to your days!  Luckily Jack and I had been to the city (many years) ago and had "done" the monuments, so those were not on our agenda this time.  That in itself takes days to really see, and we just couldn't have done it all.  What this trip was going to be about, was museums!  Jack's dream was to spend the day at the newest Smithsonian, the  National Air and Space Museum, Steven Udvar-Hazy Center in Virginia.  That's where the largest planes are now housed...all the ones they haven't been able to show in the one in DC.  He had been to all the Smithsonian Museums, years ago when he lived back east, so seeing the DC ones, were for me.  My previous trip there, I had never had the time to see any of them, and had always wanted to...so now was my chance...that, and to finally go up, inside the Washington Monument!

Quite an agenda for five days...that added to a commute of an hour plus each way with our campground being in Dumfries VA....but we were determined!

First day...Off to see the BIG PLANES! National Air and Space Museum, Steven Udvar-Hazy Center -  Now, I confess, this visit was really for Jack...as I'm not really "into" all this "war stuff"...but, I have to say, it was pretty impressive!  I mean, how can you not get blown away by something as big as the Enola Gay, that's as big as most people's homes!  Jack, he was more impressed with the Lockheed SR-71A Blackbird, that's what he couldn't wait to see, and he wasn't a bit disappointed either.  I was surprised to see the Air France Concorde there (pretty!) and enjoyed listening to a gentleman explain the Wright Brother's 1908 Military Flyer's design.  Of course we managed to spend the entire day there wandering from early planes to the space shuttles and listening to docents sharing information and stories.  I knew "my turn" would come...

Day two - We realized we were "just down the street" from Mount Vernon...and since I had never been (and always wanted to go...) well, off we went!  What a glorious day it was too!  Not to crowded (after school started, yea!), the clouds and rain went away and the sun came back out and treated us to a perfect day.  They give you "timed" tickets to view the mansion, having you line up to enter, then keep you pretty much that way all the way through.  They have docents explain what you are viewing, then quickly move you along (no dawdling) then out you go!  Once you are out of the mansion, you can take all the pictures (none inside) and all the time you want.  We sat outside on the back porch (just like George & Martha) and enjoyed the view of the Potomac River, it was lovely...It would have been nicer if we would have had a cool glass of fresh lemonade, but hey...I guess you can't get everything!

The grounds were beautiful, all in bloom.  Jack, of course enjoyed visiting with the Blacksmith, and I enjoyed talking with one of the "man servants" about slavery.  It was
especially interesting to see Washington's original tomb, and then their current one.  When George died in 1799, he noted in his will that he knew that the current site of his "vault" (what it was called at the time) wouldn't last, so he made provisions for a new one to be made of brick for he and his family members, so in 1831the Washington family were all moved to the new brick tomb location according to his will specifications.  Impressive. 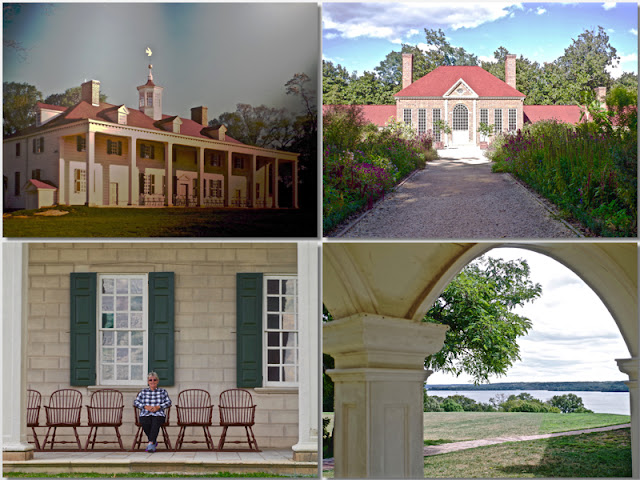 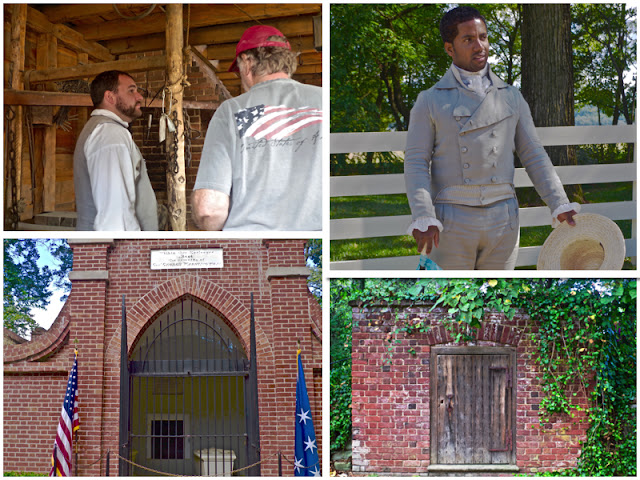 Day three - We finally made it to DC!  First stop, The Smithsonian National Museum of American History.  Wow, what a grand place!  I knew it would be, but it was even better than I had hoped for... When you first enter, you are hit right away with the "biggies" the Star Spangled Banner, the American Flag waving in metal pieces, made in Lego's, and then you enter a dimmed room where the original flag is all laid out in front of you, while you are quietly listening to Francis Scott Key's Star Spangled Banner.  Your not an American if tears don't well up in your eyes...truly emotional.

Moving on, the museum seems to have one of everything!  I mean, from the Greensboro Lunch Counter Student Sit-In to a fragment of Plymouth Rock to Dorothy's ruby slippers to Alexander Graham Bell's big box telephone to 48 different patents of disposable coffee lids!  They even had Julia Child's Kitchen from the 1940's!  I'm surprised they didn't sneak in and steel my old bedroom!  (maybe they did, and I just didn't get to that part of the museum?)  After 5+ hours of walking, we were pooped...I'm sure there were spots we missed, and I'm sure you could spend days in there and not see it all!  But no matter what, it's worth it!  Wow, just wow! 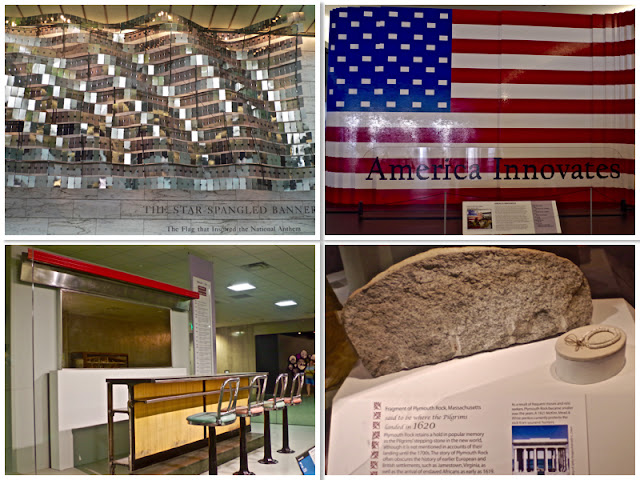 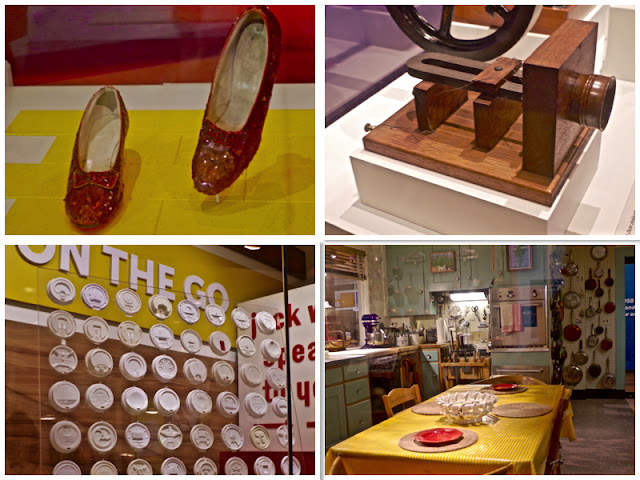 Day four - We thought we would get in to the Washington Monument, but by 10:15 they were all out of tickets!  We were informed that one needs to be there by around 8am "to get in line".  Tours start at 9am, every half hour, until 4pm.  Oh my.  Well, tomorrow being our last day, that means we best get up bright and early to be sure and get a ticket then!  ;-)

Well, then, we headed over to the Smithsonian National Museum of Natural History to check out a couple of their exhibits I had read about (birds, mostly).  The first thing you see when you enter is their very large African Bush elephant, who is 13' and weighs 24,000 lbs!  Impressive...even for me, who worked in a zoo for 20 years!  Well, once I got around him, we headed for the birds, because those lovelies usually don't stand still long enough to really enjoy their beauty...and this way "I can"! 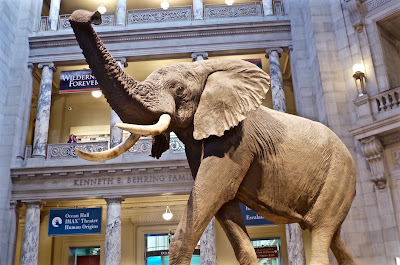 It turned out that they had "down-sized" their bird section to only a very small selection.  Some extinct birds (Passenger Pigeons, Great Auk, and the Carolina Parakeet) and some local area birds.

From there we wondered over to the gems...because, after all...that's where the Hope Diamond is!  Couldn't miss seeing that!  ;-)  Lots of pretty baubles to oh and ah over as well there... They did have a couple of other "wow" factors, including a large meteorite fragment that had been found in the 1700s in Tucson and used by some blacksmiths as anvils and other things.  It wasn't until 1851that a visiting scientist discovered what it really was! 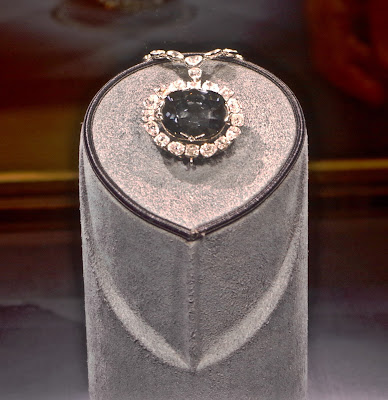 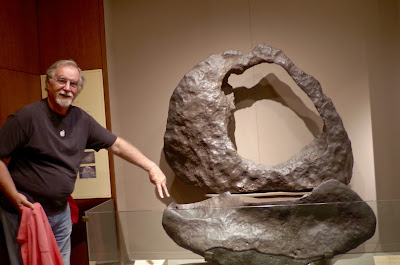 After a bite to eat, we then moved on over to the Smithsonian National Air and Space Museum to see yet more planes (albeit, smaller ones!).  I did want to see the Wright's very first flyer, and Amelia's Vega and Charles' Spirit of St Louis...couldn't pass those up! 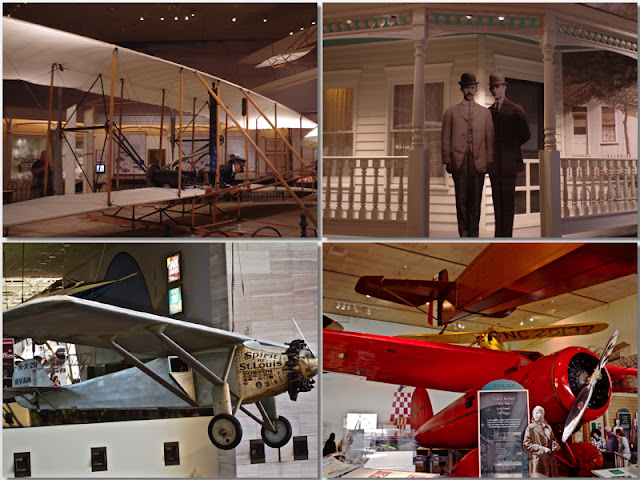 Day five, our last day - Up at 6am!  With our campground a half hour away from the Metro, and the Metro another 40 minutes out from the city, we needed to make sure we were at the monument in time to get our ticket!  We were.  Yea!  We got a 9:30 spot!  Hey, we even caught the sunrise on our drive in, who can complain about that?  The sun was shining and it was a clear day, just right for viewing and great photos!  Unlike the Mount Vernon tour, they didn't rush you through, once you were up there, you could take all the time you wanted, which was really nice.  Each window had a display explaining what you were seeing, which helped too.  Inside the monument itself was a statue of George Washington as well as some nice plaques and as the elevator comes back down, they show you some beautiful memorial stones that were placed there.  All in all, it was even more wonderful than I had anticipated.  Well worth getting up that extra early hour for! 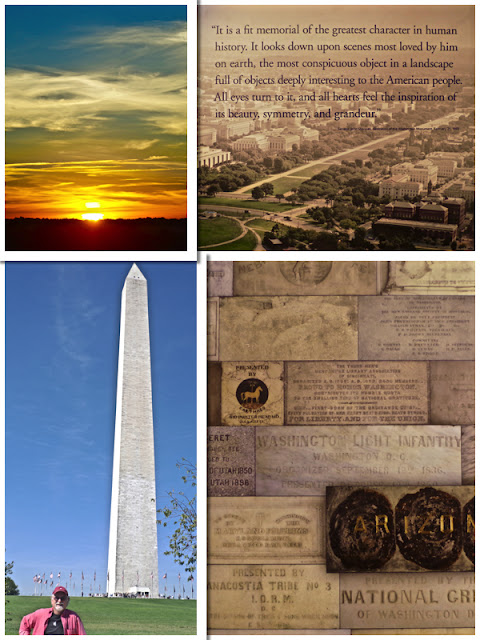 As we were walking toward our last museum, we discovered a wonderful little garden, just tucked back in.  It was the Mary Livingston Ripley Garden along side the Smithsonian Castle.  Quite beautiful.  All the plants labeled and well tended with a lovely fountain and benches, so serene and peaceful.  They had a really unusual plant there I had never seen before called the Dutchman's Pipe from Brazil that captures flies, plants their pollen on them, then releases them to go and spread it!  Pretty cool of ole Mother Nature! 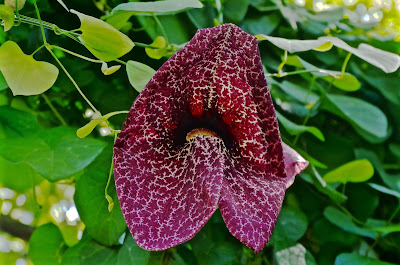 After our respite there, we ventured off to the National Gallery of Art to find some of our favorite artist (and discover some new ones).  We both love art, so several hours went by without any trouble at all.  Soon we needed to stop for a bite to eat and to get off of our tired feet.  Afterward I wanted to make one last visit to their outdoor Sculpture Garden before we called it a day...There you can always find "art" and "whimsy", and we did!

Time to bid goodbye to DC... One could spend many more days, weeks, and months here and still not see it all, I'm sure, but I guess that just gives you a reason to come back again!  We crammed a lot into those few days and our bodies felt it too, but no regrets, we loved every moment of it!  One things for sure, not matter the politics, or problems of the day, I'm proud of our heritage and proud to be an American...and a trip like this is a wonderful reminder.