After the intense schedule of Washington DC, all we wanted to do was rest for awhile, so we just headed down the road a ways to Willimsburg Virginia and parked ourselves for a bit.  It was actually close to the one thing Jack had on his "bucket list" to see, which was the Civil War ironclad USS Monitor, in Newport News.  He has wanted to see this bit of history ever since they were able to bring the turret up and put it on display a few years ago.

I had caught a nasty head cold, so all I wanted to do was bury myself in the covers, so I sent him on alone to enjoy himself at his leisure, my camera at hand.  He did, stopping at the  US Army Transportation Museum en route back as well.  A day well spent for both of us! 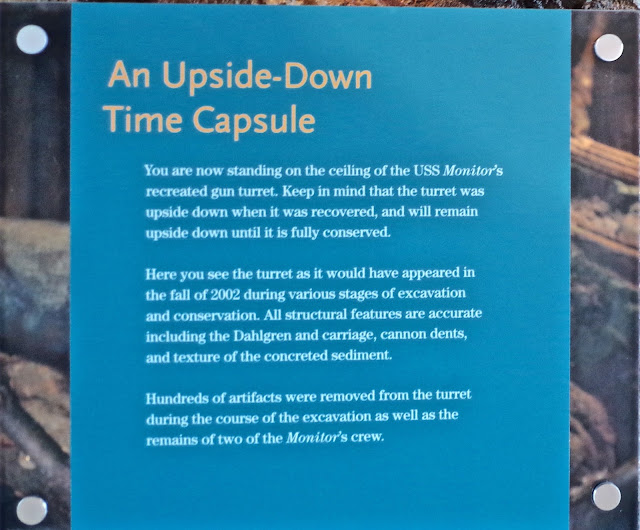 Having rested, I was up for a little leisurely sight-seeing.  We had been to Colonial Williamsburg about ten years ago, and since it's a full day's activity, and quite costly, we decided to skip it this year.   Instead, we took a nice drive over to Jamestown and Yorktown and enjoyed going through the two areas "where it all began" so to speak.  Reading the history of the original three hundred colonist, my respect and my heart went out to them...I surely don't know how they did it (of course many didn't).  Tough, tough times.  Boy, if people think they have it tough now, they should read what these people went through, then thank their lucky stars for what they have!

The following day we made a trek to Virginia Beach to check out some lighthouses and to treat ourselves to probably the last bit of fresh seafood we'll get again for awhile.  The one thing we've been doing while we've been on the East Coast is getting our fill of flounder for Jack (he can't get any on the West Coast) and crab and lobster for me.  We've had it served just about any way you can think of, and it's all been great!   We sure are going to miss it again when we leave though...

Anyway, we did have some fun finding those lighthouses.  Two of them were on an active military base that practically gave us a strip search, well, our little truck anyway!  ;-)  It was worth it though, "two for the price of one"!  A 1792 & an 1872 year old.  Nice!  The other one was on an old Fort, with a moat around it no less!  I'd say it was a pretty successful jaunt!

Alas, time to say goodbye to Virginia, for now anyway...