After two weeks of spending time with the five grand kids, we decided we needed a little "R & R"!  We had just a week before we needed to be in Pennsylvania for a family wedding, so, between New York and Pennsylvania...where?  Jack took a look at the map, etc and said "hey, let's go see where Ben & Jerry's ice cream is made!"  Sure sounded good to me, so off we went to Vermont!

We actually ended up staying in a great little campground just outside of Barre, in Williamstown, that turned out to be a great location because it was so central to so many places.

First up though, was Waterbury and Ben & Jerry's! (we had our priorities, you know).  As you can imagine, the place is cute right from the start...with their "Flavor Graveyard" where all the flavors that are no longer being made go to die...;-( Before you even enter the factory, there are cute cutouts and even their "Cowmobile" that you can take pictures of.  We lucked out and got in on a tour while they were still "in production", so we got to watch them actually making the ice cream, adding all the goodies, etc.  Of course, "no pictures" are allowed of the production (can't have Baskin-Robbins stealing their secrets!).  Then, what everyone waits for, the free samples of the day...and shopping!  ;-)  Yum!  We had full intention of doing some real gluttony there...but at 10am, and knowing we had other places were were going...we just couldn't do it. 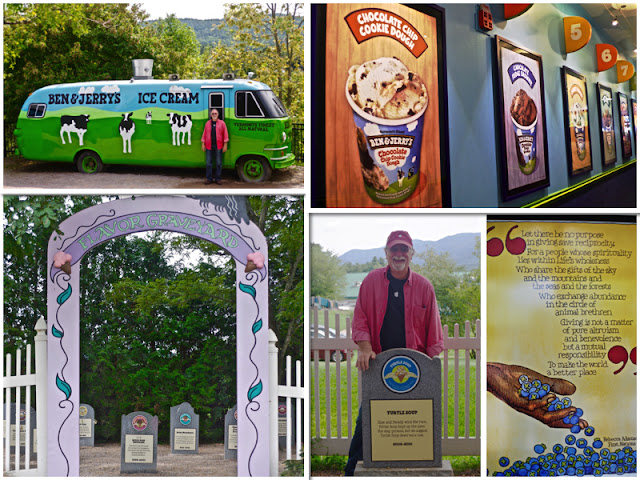 From there we headed over to Cabot Cheese, where I virtually stuffed myself tasting all their various varieties of cheeses!  Who knew there were so many kinds?  Oh my gosh, and so good!  I just had to have (and get some for others) the Everything Bagel Cheddar, the Chipotle Cheddar and the Hot Buffalo Wing Cheddar...I mean, how different are those? Double yum, right?  Jack isn't really a cheese eater, so he just sat and watched...oh well, more for me!  ;-) 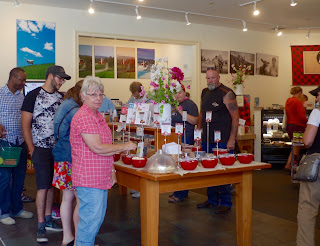 Then, it was on to Cold Hollow Cider Mill, where we had hoped to have some nice cold apple cider (I sure was thirsty after all that cheese!)...but believe it or not, they were out and their machine was down being worked on, bummer.  We were told that they had "the best cider donuts ever"!  We bought some, and some tiny apple turnovers "to go" and went next door for lunch (yes, even after all that cheese).  Phew, we called it a day...

The following day, we started off in Shelburne because I just had to go to the Vermont Teddy Bear Factory!  You see, they are the only teddy bears actually made in America.  What a great tour they give too.  Unfortunately, being Sunday, they weren't in production, but Jeff, did a great job describing each step.  Jeff showed us the first bear, made in 1983 by John Sortino and patented his movable limbs and head.  These bears are also guaranteed for life, in that no matter what ever happens to them, even if all you have is an eye, or their tag, they can be fixed or totally replaced for free, forever.  Pretty cool.  Grammy had to send one to her youngest, don't you think?  Yep...he needed "a new friend for life"...so, it's on it's way...;-) 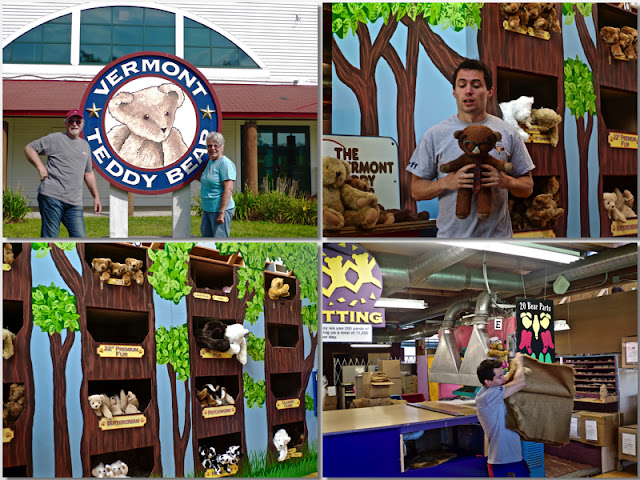 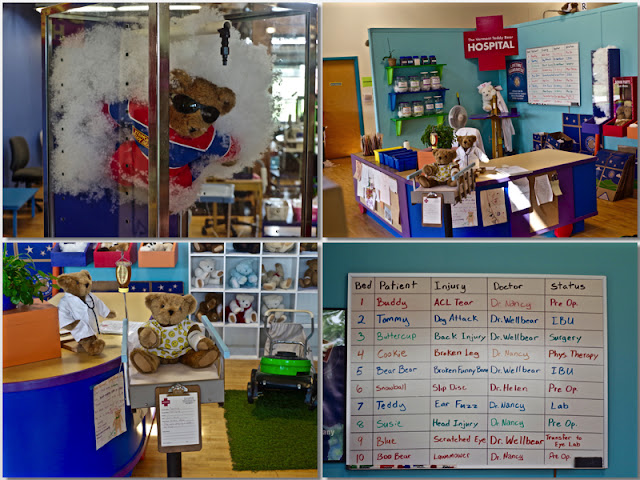 We enjoyed a nice drive & walk through Burlington and lunch along Lake Champlain before returning to Barre to tour the largest granite quarry in the US, Rock of Ages.  What a cool place!  First they take you to the quarry itself where they explain (what you are seeing) how they are slicing up the granite and pulling it up block by block to truck it off.  The granite here (they have sites in PA, Canada, NJ & NY) is the densest (light gray) there is.  This particular quarry has enough to last another 4500 years!  Guess there's job security there for awhile...  From there we went to their factory where they turn all that "rock" into beautiful monuments, statuary, and other pieces.  What a huge place, oh my goodness!  We were up on a catwalk, looking down on the artists, etc and it looks as long as a football field, with two more next to each other.  They have a "sample yard" outside, including a bowling ally!  Close by is a beautiful cemetery called Hope Cemetery that only has Rock of Ages granite headstones, many very unusual & unique ones! 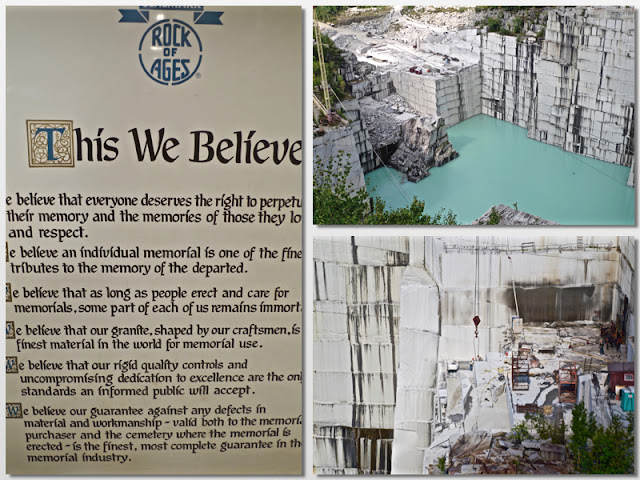 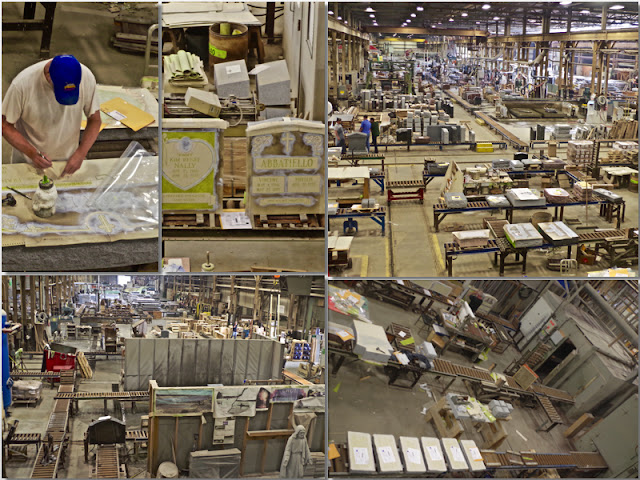 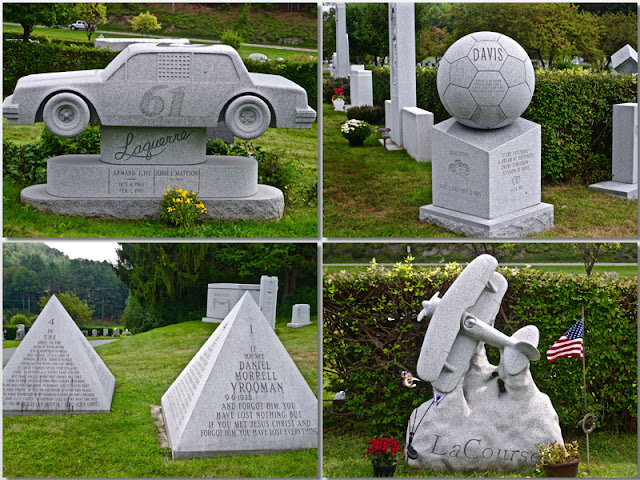 One last stop before we called it quits, and that was to see how maple sugar is made!  Off to the Bragg Farm Sugarhouse!  Now, it's not the right season, so we watched a video and Mary walked us through the "house" and the process...but, we still got to do the taste-testing!  Of course we had to buy some, and some wonderful maple ice cream too! 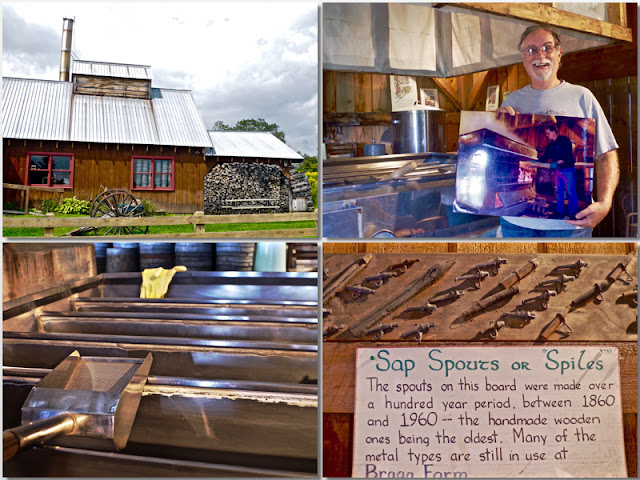 We also managed to find a couple of covered bridged before we had to leave Vermont, but then it was time to depart this lovely place.  If we didn't have to, we wouldn't have...still so much to see and do here, so glad we came! 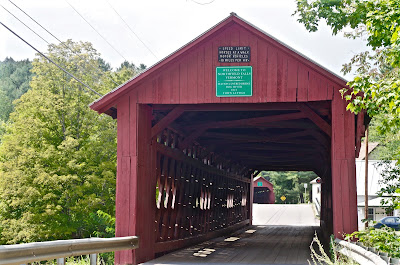 ...on the road, once again, to Pennsylvania, Marie