I was ready for some sand between my toes and the smell of sea air, so we headed for the coast!  The closest one from were we were coming from, was Corpus Christi, so that's the direction we headed.  We found a really nice campground in Aransas Pass, just outside Corpus Christi, so that's where we settled down for a week's stay.  The sun came out and greeted us with open arms!  What a glorious week it was going to be!

Our first day out we headed into Rockport to talk with the Visitor's Center folks, as we had been in the area four years ago, and I remembered a beach with a lot of shells, but I couldn't remember where...they would know!  Well...it turned out, they didn't have a clue...said, to their knowledge, "no beach anywhere around here has any shells to speak of".  However, they did make some other suggestions of things to go see, such as "the Big Tree", which we had never seen, or even heard of before.  Also, they pointed out where a few Whooping Cranes are still hanging around at, and the story of why Live Oak trees look the way they do (they are "windswept"= moist ocean air pushing the trees in a constant direction).

So, with maps in hand, off we went on our first excursion, to see the "Big Tree"!  Little did we know, it would be quite a drive...but well worth it!  As we drove, and drove, and drove I started to wonder if (1) were we lost?  (2) was this a wild goose chase? (3) was it going to be a dud?  But, finally, we came to a clearing, and there, it was, bigger than we both had imagined, was this beautiful, grand, lovely, 1000+ year old Live Oak Tree!  It stands over 44' tall, 89' across the crown, 11' across the trunk and 35' around.  It was worth the drive!  Surrounded, were "her offspring", almost as large and as lovely...  Truly, a lovely little forest.  We were so glad we were told about this gem. 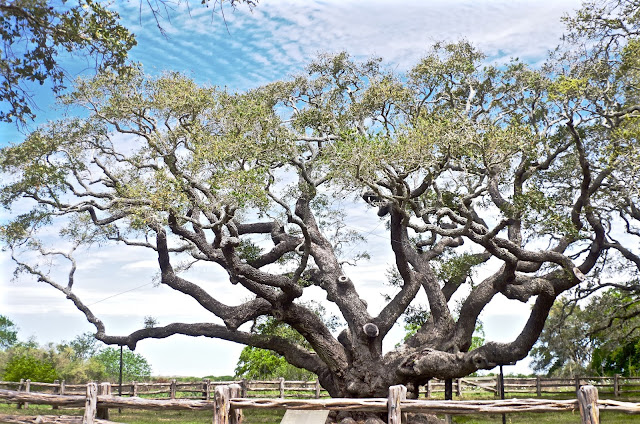 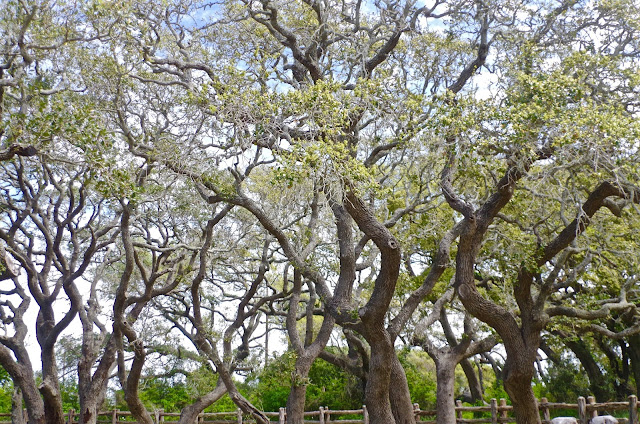 Back in town, we visited the area where the Whooping Cranes are still wintering on top of the "windswept" Live Oak trees, and checked out the Big Blue Crab sculpture that started out on the Del Mar Grill back in 1957.  It's had to be redone since then, but it's an icon now in Rockport, and pretty impressive, I must say! 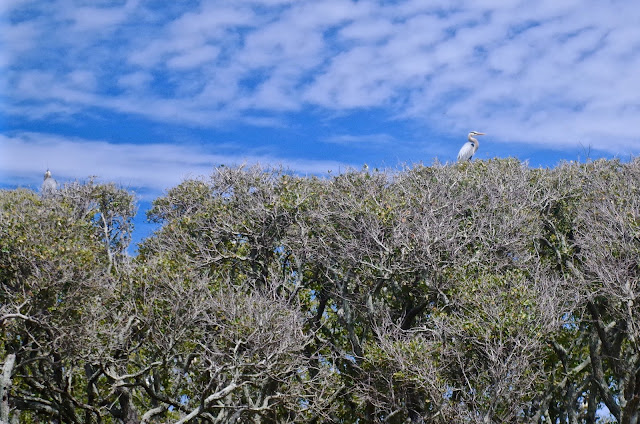 Rockport preserves some of their beach area for bird nesting.  It's pretty cool.  They just rope it off, and put signs out asking you not to disturb the birds.  You can get up pretty close, the birds are used to the people, so don't really mind you watching, etc.  They have several acres of sand and grass.  All kinds just fly in and out as the seasons change.  While we were there it was mostly Franklin's Gulls and Black Skimmers in one area and  in another. 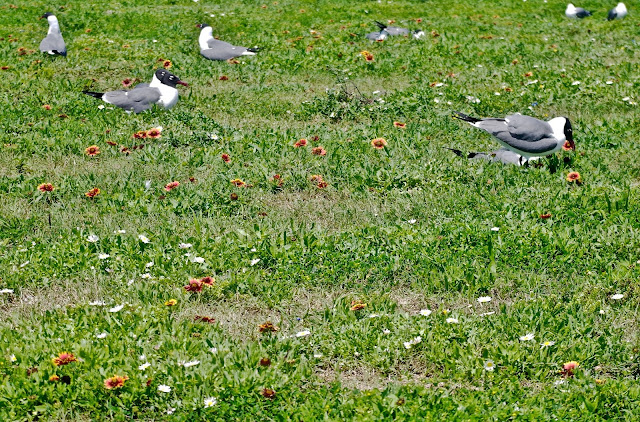 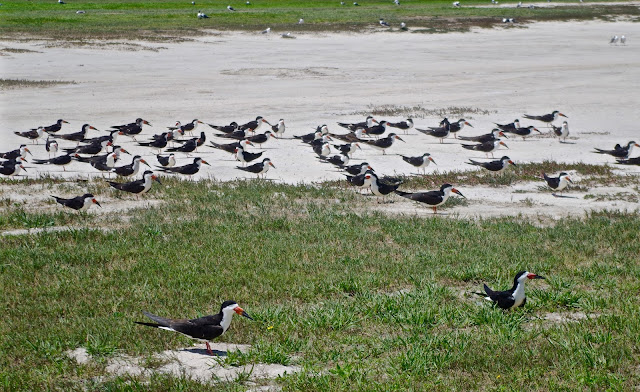 The beach itself is really pretty too.  It was clear, warm and washed up these tiny, round stones of various shades of brown.  We scooped up a bunch to take home.  I'm going to add them to my drift wood pieces as accents. 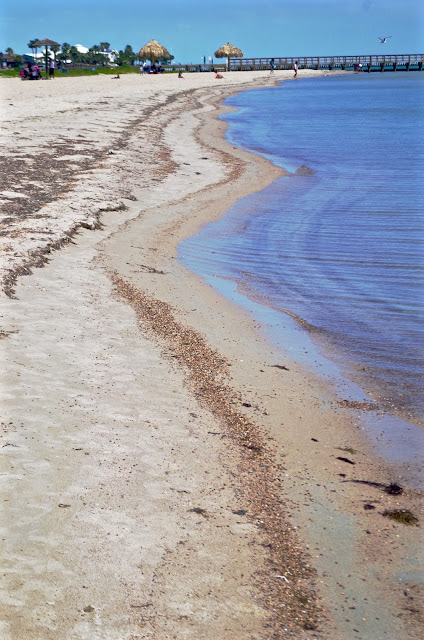 Later in the week we headed into Corpus Christi for sight seeing.  Stopped and saw the Selena Memorial.  It was quite nice.  They have a recording playing in English and in Spanish explaining it and one short song. People constantly come and play homage to her and bring flowers, etc.  It's right along the harbor's edge. 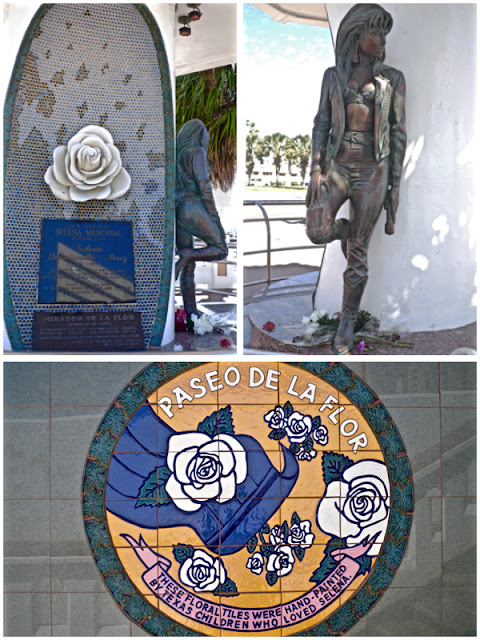 Great harbor, with a lot of wonderful Brown Pelicans! 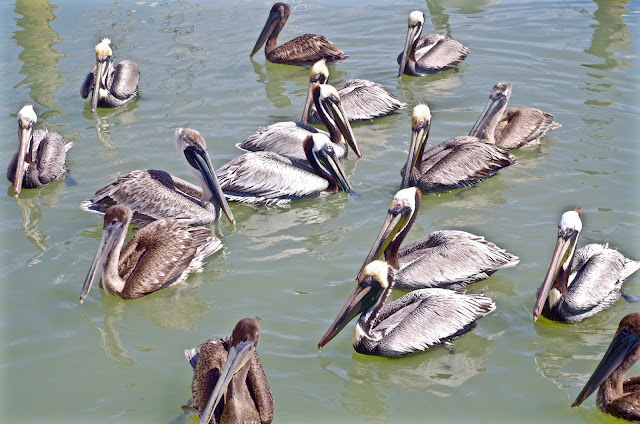 From there, we drove out to Padre Island (not "South" Padre Island...just because I wanted to see what was there...not much.  A very  l o n g  drive.  Once we finally got to the Ranger Station, we listened to a nice talk about what you could find along the beach (interesting!) and about the Kemp's Ridley Sea Turtles.  I had hoped they would be hatching and ready to be released into the sea...but, actually they are just now starting to lay their eggs and it won't be time for them to hatch for another 45 days!  Oh well, bad timing once again...
Anyway, we took a walk along the beach, enjoyed watching the cute little Sanderlings, then turned around and headed back for the very  l o n g  drive back out again! 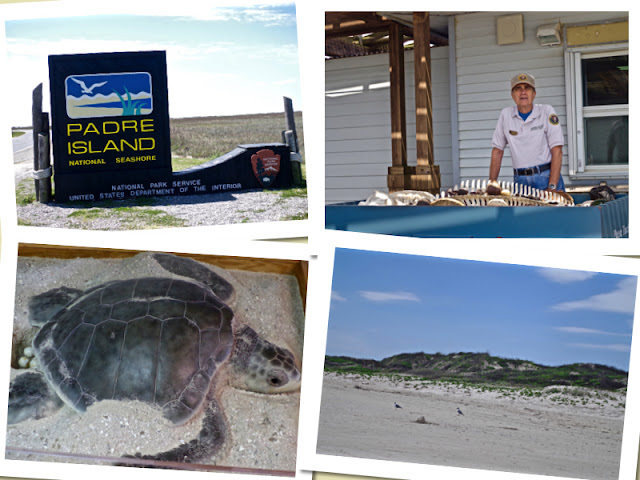 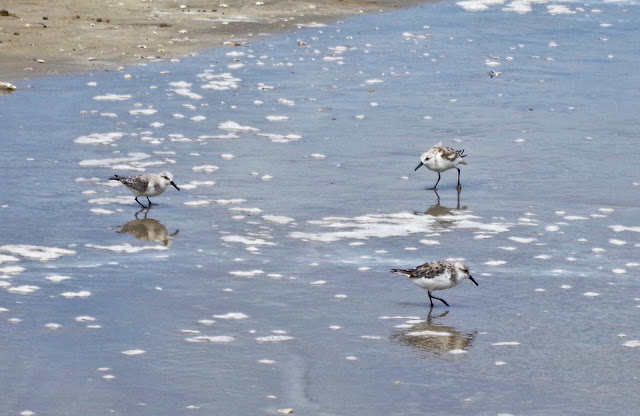 The rest of the week...we just enjoyed the sun, propping our feet up, relaxing and reading!  Life is good...