The Land of Lincoln...

I have long been a big fan of our 16th President.  He, along with a few others, had a very tough presidency, and in my personal opinion, handled it as best as any human being could.  I admire that he went into his presidency with the agenda to do his best "to free all men, and make them equal".  No easy task, not then, not now.  It cost him his life, but I doubt that if he had known it then, it wouldn't have changed his mind.  His personal life was just as tough, loosing two of his children while they were so young.

Spending time in Springfield IL was enlightening because it mostly concentrated on the 27 years before he went off to Washington.  It was nice to see when he arrived and first met Mary, their courtship, their first home together, raising their children.  Learning more about the boys (and how "unruly" they were!)  There are statues all over town of not only Abe, but of the family as well.  The interesting thing was seeing his progression in age.  Like all our presidents, especially those with troubling terms, you can really see his face change through the years. 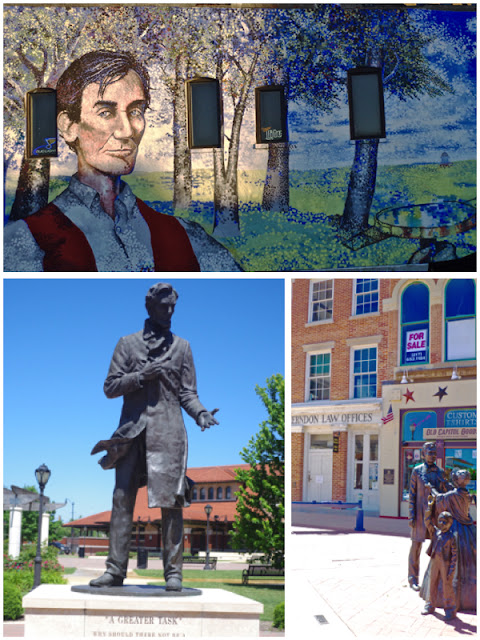 They have even turned his home into a National Historic Site, which is nice.  They have preserved several blocks surrounding it, recreating and protecting (as much as they can) his neighborhood.  It was nice to be able to tour not only his home, but the area as well...a little "step into the past"... 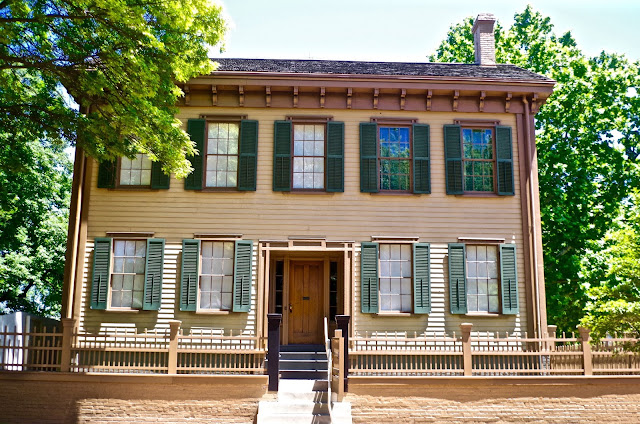 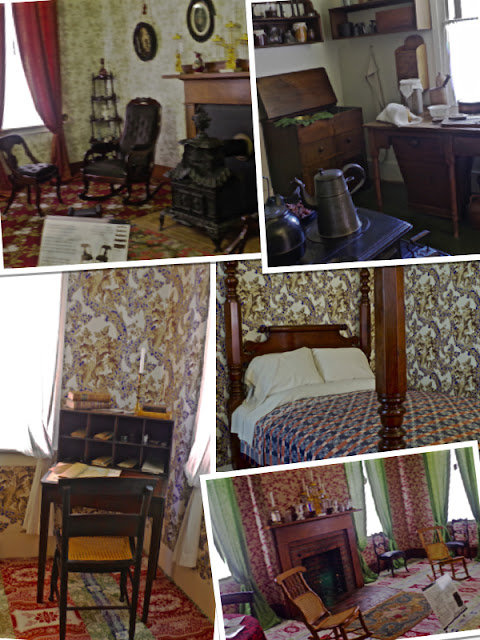 We were super lucky and were there for the first night of the 114th Volunteer Infantry Regiment of the Civil War performing a Flag Lowering Ceremony at Lincoln's Tomb each Tuesday during the summer.  They perform Civil War drills, firing of muskets and a cannon.  It was quite moving.  Afterward,  they opened the tomb for viewing, which was very impressive with 8 bronze statues depicting various phases of Lincoln's life.  As you enter the memorial it contains a rotunda, a burial room, and connecting corridors that lead you to the burial room.  At its center stands a 7-ton block of reddish marble inscribed with Lincoln's name and the years he lived.  It marks the approximate location of the burial vault, which is 30 inches behind and 10 feet below.  Along the south wall of the burial room are four crypts containing the remains of Mrs. Lincoln and three of Lincoln's four sons, Edward, Willie, and Tad (the eldest, Robert is buried at Arlington). 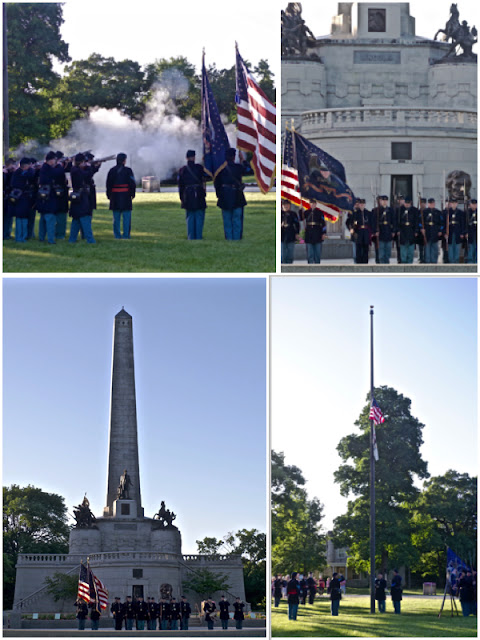 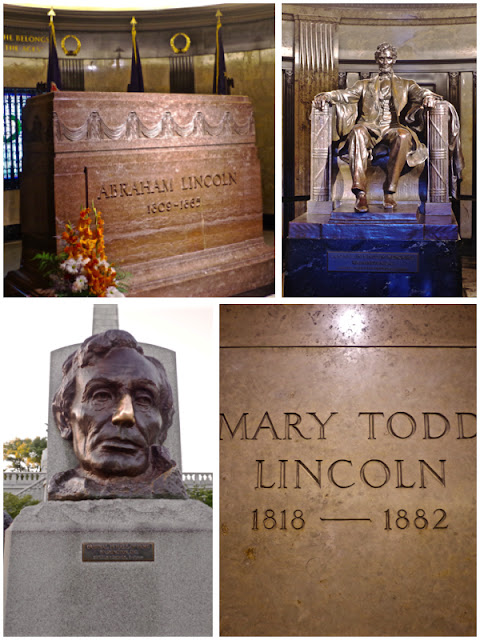 I had read that the Abraham Lincoln Presidential Museum was extraordinary and not to be missed...and they weren't wrong.  They pull out all the stops here, using holographic and special effects theaters, live actors, life-like statues, historic displays, replicas from his boyhood home through to the Presidency and on through the Civil War.  40,000 sq. ft.  It took us hours to go through it all!  It was not only educational, it was entertaining, which was nice for a change in a museum!  ;-) 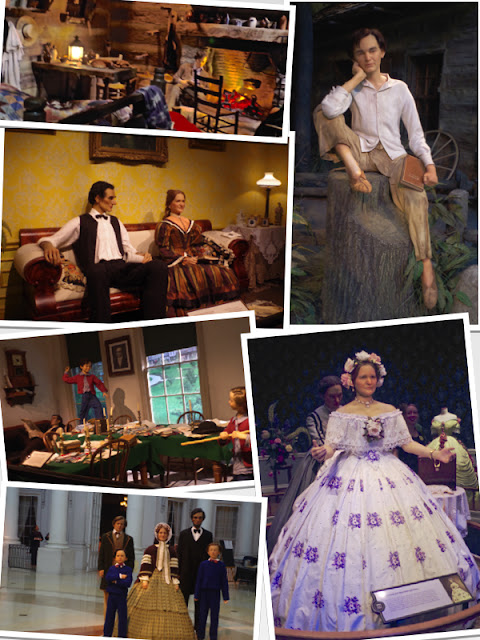 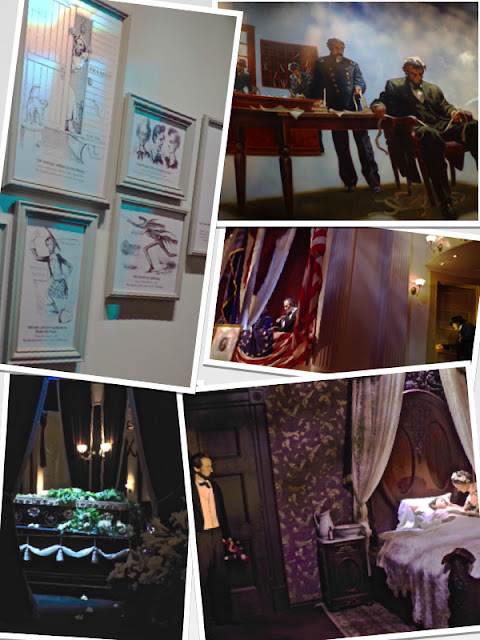 Not everything in Springfield was about Lincoln... they do have a beautiful park called Washington (yup, just about everything does have a President's name tho!)  And in it is a lovely carillon, the Thomas Rees Memorial Carillon.  Once again, we were in the "right place at the right time" and were able to catch their first weekend in June concert.  Lovely.  While the carillonneur played, I roamed the gardens and smelled the flowers and took pictures...what a lovely way to spend a summer's evening! 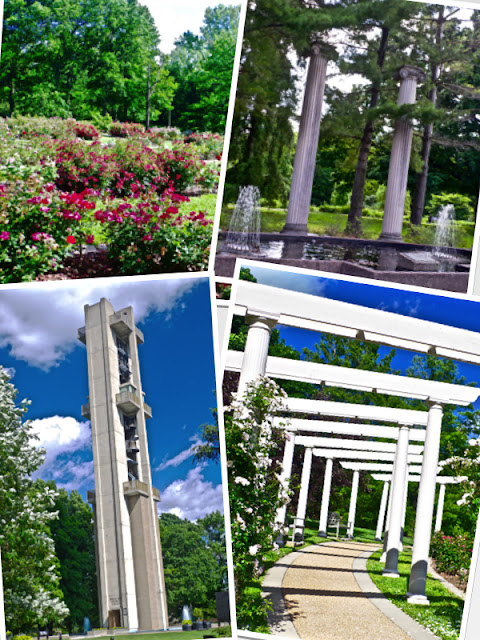 Springfield is also the State Capitol of Illinois (so of course we had to add it to our list to go visit).  Actually, like many others, they have two...old and new.  First up, was the new...
They give tours, and we were so glad they did, because, I have to say, this was the most beautiful and most ornate State Capitol we've been in thus far!  Wow!  They even give you a lovely 30 page color souvenir booklet, they are so proud of their Capitol.  (and can you believe, they don't even have a gift shop?) 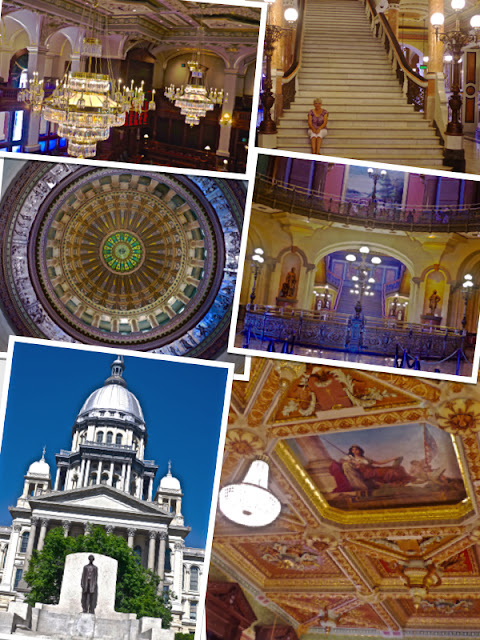 A few blocks away was the "Old Capitol" (c1837-1876), the one Lincoln served in, and was laid in state after he was shot, was nice for the times.  Generals Sherman and Grant and one of their Majors met us in the Senate Chamber and shared how they got into the service.  It was a fun and interesting look into their history. 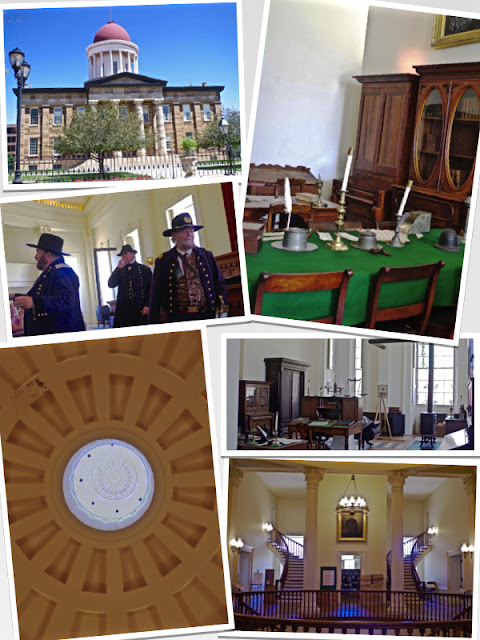 The Union Train Station, where Lincoln left for his campaign, where he left Springfield for Washington...now houses memorabilia from the movie "Lincoln" by Steven Spielberg. 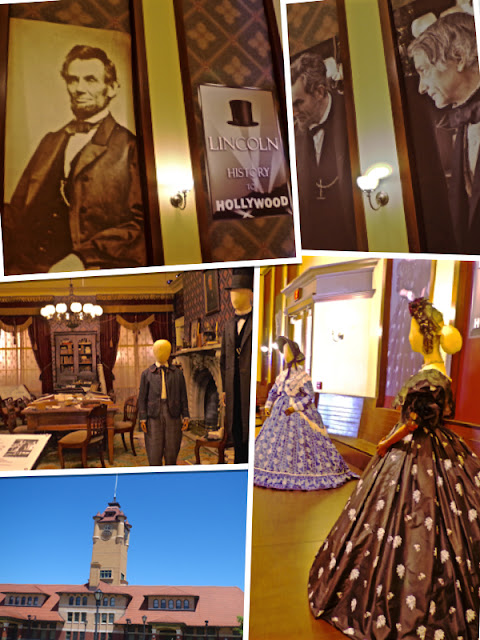 We enjoyed our visit to Springfield.  They, like St. Louis have their own "special food" item, it's called a Horseshoe.  It starts with a thick slice of bread, then a meat choice (traditionally, I was told, a hamburger patty, so that's what I got) then a special cheese sauce poured over that, then the whole thing is covered with French fries!  Well, I had to try it of course ( I ordered a "pony" which is half the size)!  Not bad!  It actually gets addicting once you get started... 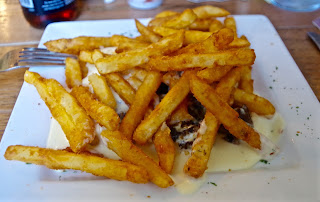 After two very busy weeks of "sight-seeing" we are off to Rock Island IL where Jack can go see their Arsenal that he's been wanting to see  for a long time, and I can spend some time just sitting back and relaxing!  Ahhh...

...kicking back in Illinois,  Marie