The Gateway to the West!

As we've traveled back and forth across country these past four plus years, we've gone through St. Louis more than once, but never stopped.  I've waved at the Arch, promising myself that some day "I'd be back"...that someday finally came.  For the longest time, I never knew you could actually go up inside the Gateway Arch...then, I found out you could...that's when I told Jack we were definitely going to visit St. Louis!  ;-)

We found a campground right downtown, and boy was I glad we did!  We soon found out that there was so much more to see here than just the Arch!  Wow, tons actually, that we ended up extending our stay!  But first, the Gateway Arch... 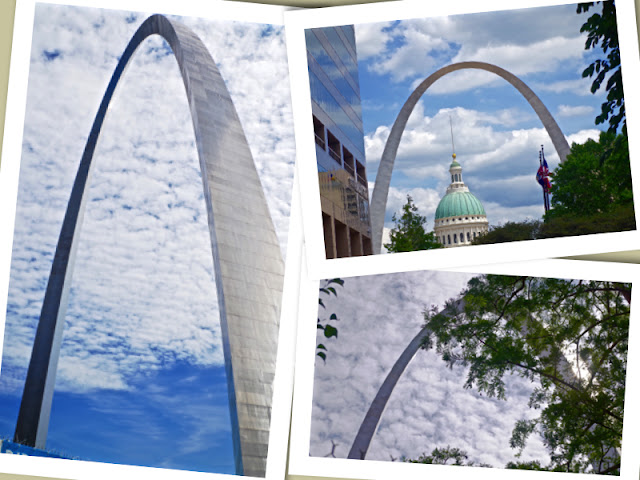 Just our luck, we came one year to early...you see, they are in the midst of a huge remodel that will be completed this time next year.  It should really be beautiful too.  It will include a pass-over bridge from the Old Courthouse over the freeway to the Gateway Arch which will be nice too.  Lots of greenery, trees, flowers, fountains, all that kind of stuff.  But for now, you still get to go up inside, take the cute little (and I mean little!) cars up into the Arch and wander around the top at 630' high and enjoy the fantastic view.  Loved every minute of it. 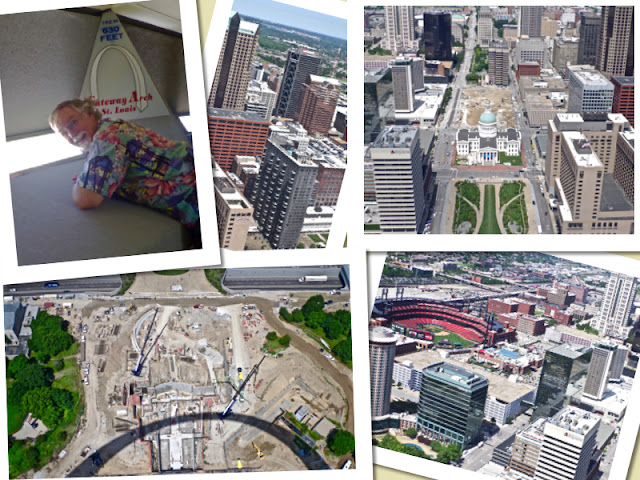 Our timing was perfect that we were able to catch the Becky Thatcher Riverboat afterward for a one hour tour along the Mississippi to further see the two states (Missouri on one side and Illinois on the other).  Interesting to see the progression of bridges over the years, from old stone & iron to the more modern style.  We even saw the old Union Light & Power Co that was build for the World's Fair in 1904, and is still operating today. 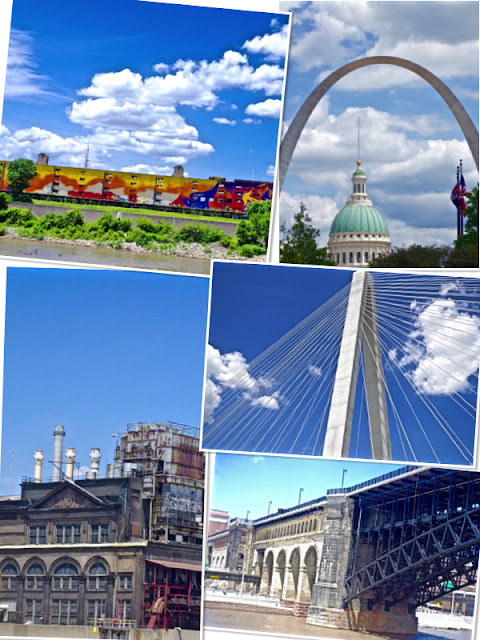 Back on land, we stopped in to see the Historic Old Courthouse.  It looks like a capitol building, and is often mistaken for one in pictures.  It's as pretty as many we've seen inside too!  It's where the famous case of Dred & Harriet Scott filed suit for their freedom in 1846.  The court ruled that they were not citizens of the US because they were black.  Opposition to the decision was one of the causes of the civil war and led to the 13, 14, & 15th amendments to the constitution.  The Scotts' struggle for freedom stands as a defining moment in the history of the civil rights movement. 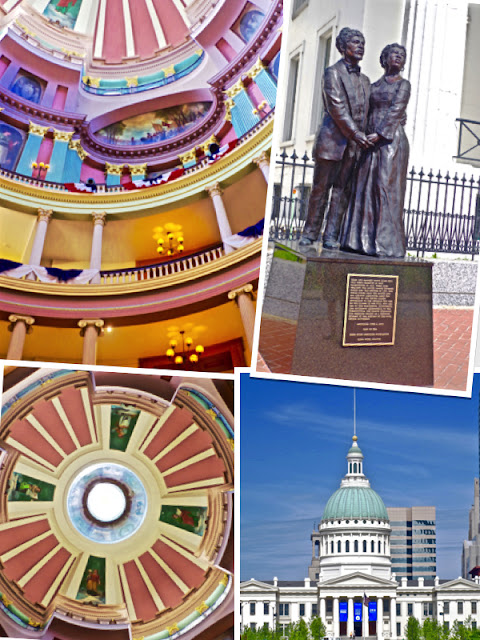 Driving around St. Louis was so much fun!  They gave us a great map of the area that showed all the various "neighborhoods" pointing out each area's distinction (there were 19!).  For instance, there is "The Loop" where St. Louis' Walk of Fame is, stars all along the sidewalk of all the famous people who were born here (Hollywood eat your heart out!).  They also have a life-size statue and a whole area set aside for Chuck Berry!   Then, there's Lafayette Square, where there are blocks and block of Victorian-era "painted ladies", along with other beautiful historic homes.  The Hill is "Little Italy" where even the fire hydrants are painted green, white and red! 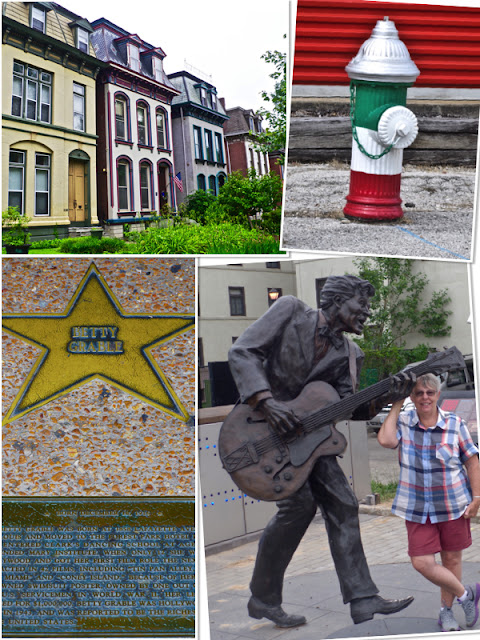 Downtown manages to tuck in the most though.  One thing they all have in common, is churches.  I've never seen so many, and huge!  It seemed like a cathedral was on every corner, but the biggest by far was the The Cathedral Basilica of Saint Louis (c1907-1982).  It was mind boggling.  The whole inside was covered in over  83,000 sq ft of mosaic art that took 75 years to complete.  The word "beautiful" just doesn't do it justice. 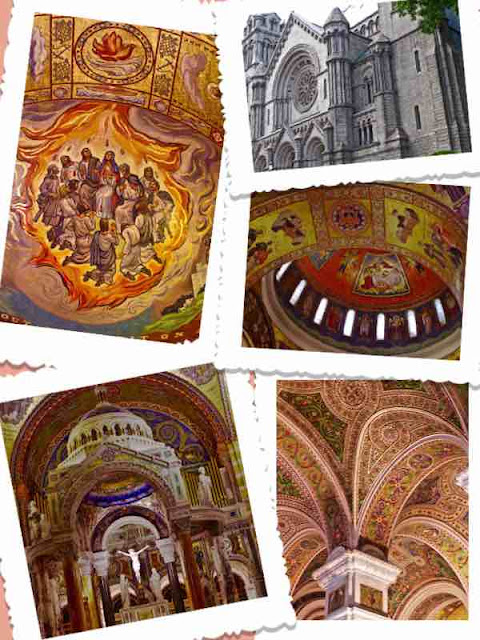 Another mind blowing experience with the City Museum.  Now, this is nothing like any museum you have ever been to, trust me on this!  It's more like a jungle gym on steroids that has a few museum pieces thrown in for the grown-ups to enjoy while the "kids" enjoy themselves!  WOW!  Is more like it!  It's like they raided every junkyard in every city and hired the best welders around to put it all together in the best mazes a kid could possibly enjoy, then added some wonderful decorations, great imagination, and kept building from there!  Did I say WOW?  If you've got kids, it's worth a trip to St. Louis just for this! 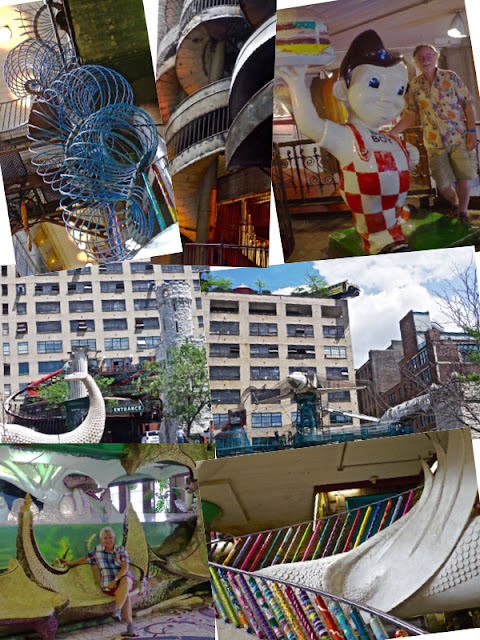 What's a trip to such a historical city without a visit to their cemeteries?  They have two huge ones The Bellefontaine and Calvary.  The Bellefontaine was where the most famous and wealthy were buried.  Such well known as Sara Teasdale (1st Pulitzer Prize winning poet), Adolphus Bush (founder of Anheuser-Busch Brewery),William Clark (Co-captain of Lewis & Clark expedition), and many St. Louisianans.  The Calvary Cemetery was more difficult to get around as no one was there to get a map from, and it was over 470 acres.  We were able to locate Tennessee Williams (poet & playwright) though. 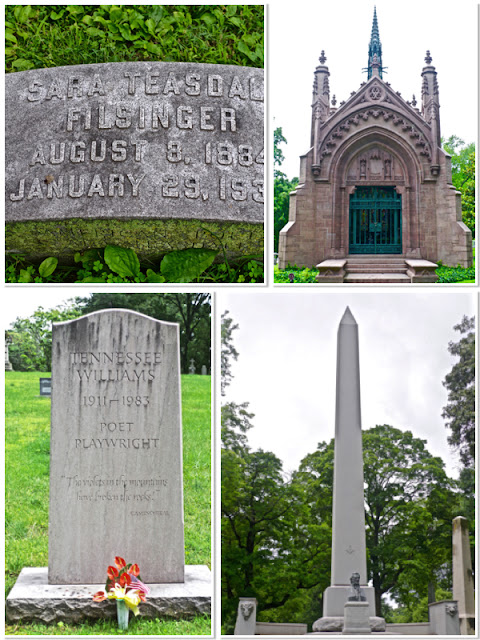 St. Louis even had it's own food style too!  Of course most places do, but not to the extent that we found in St. Louis, we had to try a couple.  Now, we are big fans of frozen custard, so first up was a place called Ted Drewes.  When we got there, there was a long line...good indication.  The list of flavors and "specialties" was long.  I don't usually go into all that stuff, but the day was hot and muggy, so I tried the "Hawaiian"...OMG!  I fell in love...I should say, WE fell in love...Best ever!!!   Next up was pizza.  Now, Jack's a real picky pizza eater, so this was going to be tricky.  But...St. Louis style calls for a "an unforgettable cheese called Provel. It's flat, crispy and is served cut into squares instead of wedges.  So, worth a try, right?  Well, turned out to be pretty good!  Different!  So, I went for 3...what they call "Gooey Butter Cake". The name says it all.  It's "gooey" and it's "buttery" and it almost comes in the consistency of a "cake".  Seems it was an undercooked mistake in one of the area's old German bakeries, now a hip confection.  When we got there, they were almost sold out for the day, only two left!  Not bad!  So, 3 for 3!  I left it at that, why ruin a good thing?  ;-)

St. Louis may be the "Gateway to the West", but before one heads out, there is so much to see and do in that wonderful city, one needs to "stay awhile and enjoy", I'm so glad we did!

...on the road to Illinois,  Marie