After spending less than a week in Red Bay Alabama having the windshield replaced (after 4+ years, full-time on the road, I guess one has to expect a rock is going to get you, but...ugh!), a new side camera and our slide-out adjusted, we were "ready to roll" again!  Since it hadn't taken long, and the Memorial Day weekend was coming up quickly, we decided that a wonderful way to spend it would be listening to music!

Mountain View AR wasn't that far from where we were, and we hadn't had a chance to get there...and we had heard sooo much about it, so, we just had to turn ourselves right back around and give it a visit!  I was so delightfully surprised when I called to make a reservation that my first choice campground, right next door to the Ozark Folk Center, was available for the whole weekend!  It was a sign that our trip was meant to be!  Our next call was to the Tom Sawyer RV Park in West Memphis AR where we always like to stop en route, so we can run across the river to Memphis TN to get (the best) BBQ ribs at the Blues City Cafe!  They too had availability for the night, yea!  We were living right!  ;-)

The night we pulled into Tom Sawyer's we unhooked the truck and settled the rig and then took right off to Memphis.  The sky didn't look very good, and it was predicting to rain, but not until later.  Memphis had been celebrating their "Memphis May" all month and that night was their final night with a closing outdoor concert by their symphony that was suppose to be from 2-9 pm in the park.  I thought after we ate we would wonder over there for a little while and listen.  Rain drops started falling as we drove across the bridge, and by the time we made it to the restaurant, it was coming down pretty hard.  I thought "there goes the concert".  While we ate (YUM!) we watched the rain come down in sheets along with the wind just whipping it around.  I had brought our big umbrella, and when we left, I tried using it, but the wind quickly turned it inside out and we got drenched!  No matter, the food was so worth every drop of rain!  I did feel sorry for the (I'm sure) cancelled concert tho. 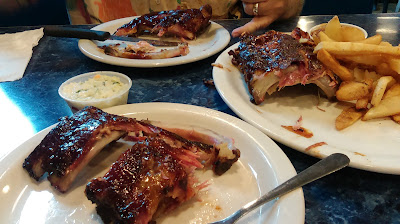 The sun followed us all the way into Mountain View the following day.  Yes, it kept trying to rain, and it would spit for 10 minutes or so, then stop, and then the sun would come out again!   Our first full day was like that, we went to the Ozark Folk Center like that, and it turned out to be the best decision because most people stayed away because of it, so the park was practically empty.  The Center is twenty-four buildings and outdoor areas housing craft demonstrations and music programs recalling the period 1820-1920 in the Ozark Mountains.  Because there were so few people that day, we could talk as long as we wanted to each of the craft persons about what they were doing & how, etc.  Those of you that know Jack, know that it didn't take him long to get over to the Blacksmith's shop! 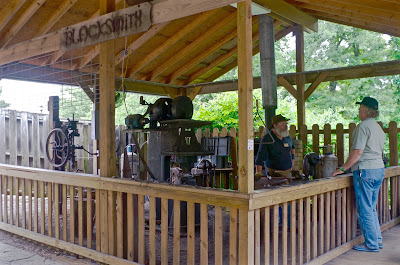 I visited three or four shops while he and the smithy chatted!  Later, he also enjoyed chatting with the print maker in the Print Shop as well, talking about the "good old days of printing".  So much fun. 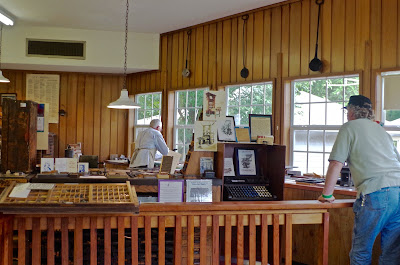 My favorite, as always was the music.  We listened to two different groups, first to the  Original Flathoof Stringband, then later to an incredible young man named Dom Flemons who played banjo, guitar, harmonica, fife and bones in addition to singing!  What a talent! 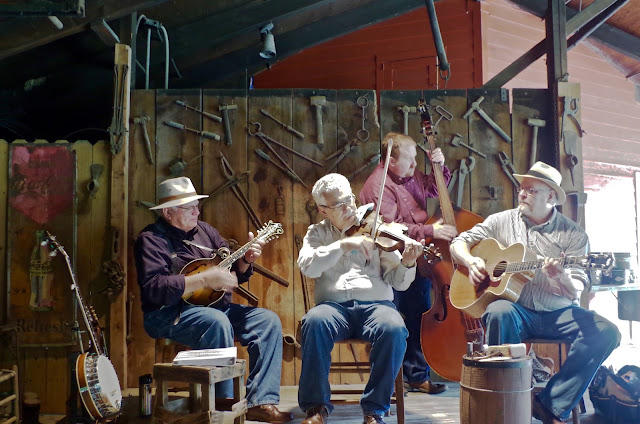 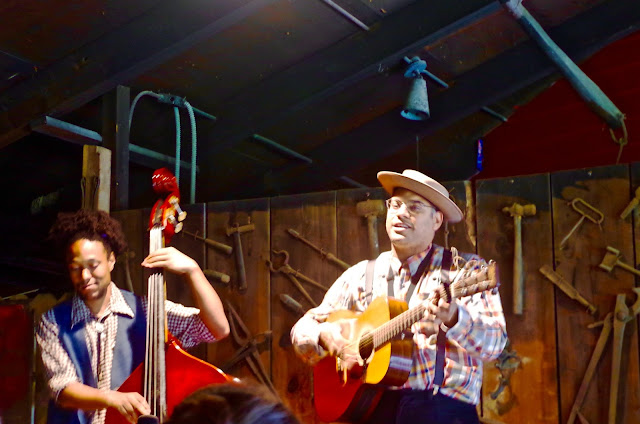 That night we had intended to go down the road to listen to a group we had seen advertised on a poster that was playing in a barn, but having an hour to kill, dashed into a fun looking country store nearby.  When we got inside, the shop keeper asked if we were there for the show?  I told her I didn't know there was a show there (then noticed a stage in the back with nice padded chairs lined up).  She explained that they had a GREAT show, "as good as any in Branson!, and only $13!"  Jack and I looked at each other (we didn't know one show from another, we were already there, the seats looked comfy, so, why not).  So, I told the lady "sold!"  We stayed, and she was right, what a great show!  The main singer turned out to be a lady by the name of Pam Setser.  She was accompanied by another woman and man playing base and guitar that were also great.  She also brought up a young gal a couple of times to clog that was fantastic.  Two plus hours of pure entertainment, plus free popcorn!  Can't beat that in Branson! 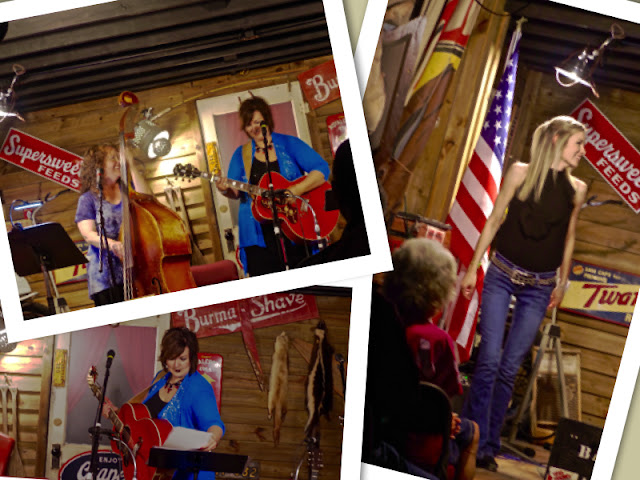 Mountain View is all about music.  Locals (and visitors) are "jamming" in campgrounds, on the porches of the B&Bs & motels, at the various "shows" (in barns, cafes, clubs, etc) for minimal fees from $5-$15, and especially at what they call "pickin' park" which is the Washington Street Park next to the Courthouse.  Three pavilions are set up along with benches and chairs for the players and listeners, but often more groups gather (I saw 5 one day).  Each seem to play differently, having their own style of music.  We went several times and sat a listened for hours, enjoying the various musicians. 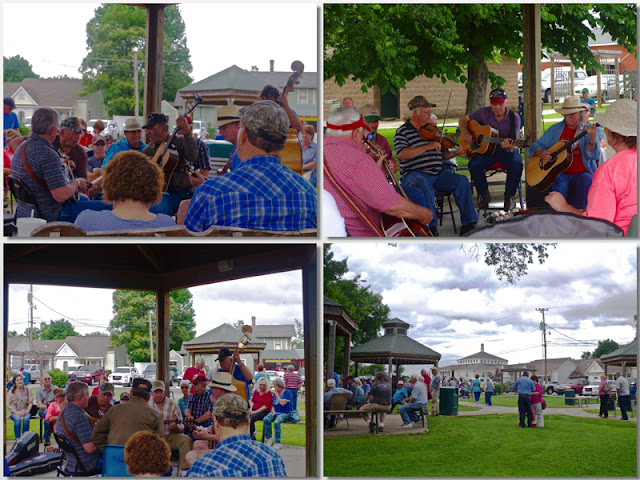 One night we ventured back over to the Folk Center to hear their "featured performer" Tony Joe White.  He was known for "Polk Salad Annie" and "Rainy Night in Georgia".  Well, it turned out he was more electric guitar, than folk, and for me, not my style... When we returned to the campground, a couple of campers were playing softly on the auto harp and guitar...I told them they sounded better than Tony.  ;-)

Being a "military brat", Memorial Day is special to me.  I like spending it in small towns because they usually due it up right.  Mountain View was no exception.  Their mayor and local VFW folks held a wonderful service remembering our fallen heroes, complete with a great bagpiper. 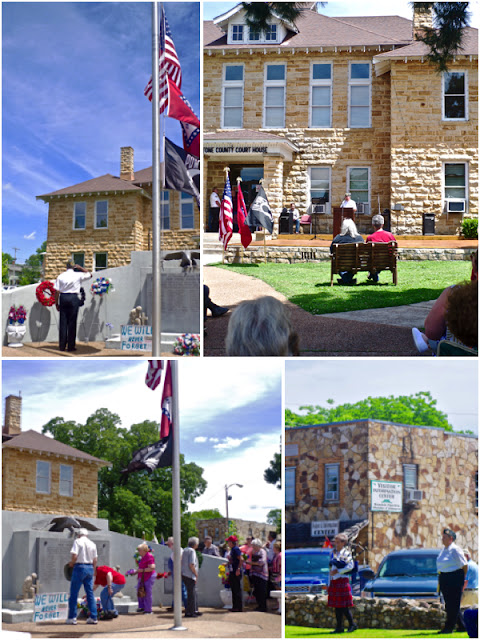 Our last day there, we took a lovely drive through the Ozark Mountains one last time.  So beautiful, all the trees... We came to a huge dam and a big lake, the Norfolk that was really quite something to see, and checking our map, realized as big as it was, it was the smaller of two in that area! 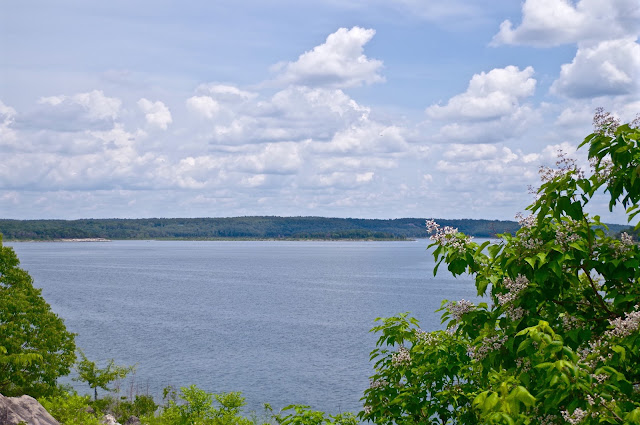 Well, once again, it was time to leave this beautiful state, it's lovely trees, wonderful song birds, and pretty wildflowers.  This time we're heading to Missouri.  I've always wanted to go up into the St Louis Arch!  So, we're off to spend a couple of days in that exciting city "just because we've never been there!"

...on the road in Missouri, Marie
Posted by Marie