We've been "full-timing" it for over four years now...on the road the whole time...and how we missed Arkansas, zig-zagging the way we do all across the country, back and forth as many times as we have, I'll never know, but we did!  So, I made it our mission to see Arkansas this year, so off we went.  And I'm so glad we did.  What a lovely state it is too!

Our first stop was to stay at the Lake Fort Smith State Park.  What a beautiful campground that is.  It's been such a long time since we'd been to such a lovely park, we'd almost forgotten how nice it is to be at a place that had large open sites that were set far apart from each other, tucked into "nature" and with fire rings!  So great to be able to just sit back and listen to the birds, build a lovely fire, look at the trees all around...now if only the lake was within view as well (oh well, guess I just want "everything", huh?). 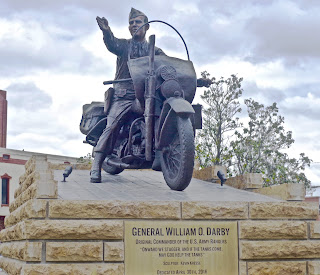 Although the town of Fort Smith was small, it had a few interesting "historic" figures they were proud to share with folks...As you enter into the town, the grand statue of General William D Darby (c1911-1945) on his wonderful motorcycle greets you. The plaque shares that the General was the original commander of the US Army Rangers, an elite force patterned after, and trained by, the legendary British Commandos.  Darby's Rangers were the first American soldiers to actively engage the German Army in combat at a desperate time when America had few resources to counter Nazi aggression in Europe.
Another proud statue fronts a small park, for a whole other kind of "leader".  The first black man to be a US Deputy Marshall.  Bass Reeves served from 1907 to 1910 in the western frontier.  He arrested thousands of felons, including his son and a minister.  He died at the age of 71. 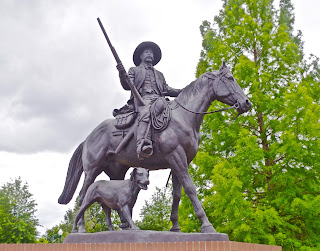 Probably the most "notable" was  Judge Isaac Parker (c1893), also known as "The Hanging Judge".  Judge Parker had the largest criminal jurisdiction of any federal court at that time, the Western District of Arkansas, and so handled an extraordinary number of murder and rape cases.  When a jury found defendants guilty in these capital cases, federal law mandated the death penalty.  In Fort Smith, that meant an execution by hanging on a crude and unsightly gallows. Judge Parked sentenced 160 people (4 women) to hang.  Of these, 79 men were hanged.

The most fun one was Miss Laura!  Miss Laura ran one of (the best) brothels in town!  It's now the Visitor Information Center (don't you just love it?).  They give tours and the ladies get a health certificate & the gentlemen get a sheriff's badge at the end!  ;-)  In 1903 Laura Zeigler opened a new brothel with money she borrowed from a respectable local banker.  Business was good from the start, and she paid off the loan in 17 months!  Originally named the River Front Hotel, Miss Laura's soon became one of the most celebrated bordellos in the Southwest.  Her ladies were known to be the most refined and the healthiest of Fort Smith's "daughters of joy". 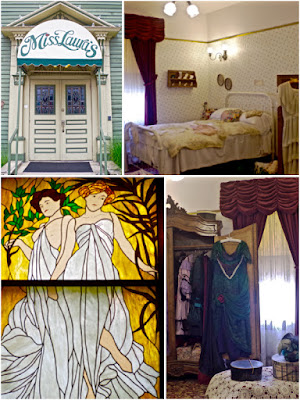 In 1973 the building was selected for inclusion in the National Register of Historic Places.  Restoration began in 1983 and Miss Laura's Restaurant and Social Club opened one year later.  Miss Laura's had finally become respectable!

The architecture of the house is unique.  The clapboard structure is a simple, yet elegant, example of baroque Victorian architecture.  The furnishings are Victorian and much the same as was used when Miss Laura owned it.

In the fall of 1992, Miss Laura's reopened as the Fort Smith Visitor Center.

On our last day in Fort Smith, we decided to see the countryside by train!  It's our favorite way to travel when we can.  The Arkansas & Missouri Railroad offers a two and a half hour ride through the Ozark Boston Mountains on their 1950's California Zephyr.  It was a lovely spring day and full of sunshine, just perfect for a train ride!  The train wove it's way through lots of tall green trees, crisscrossed back and forth over the Clear Creek dozens of times (or as locals call it "Frog Bayou"), over three tall trestles and one very long tunnel, past sunny meadows, farms, and small towns.  We sat back and enjoyed a light lunch and listened to the conductor share tidbits of information and funny stories in his Arkansas accent, and I snapped as many pictures as I could...  Such a wonderful way to spend the day. 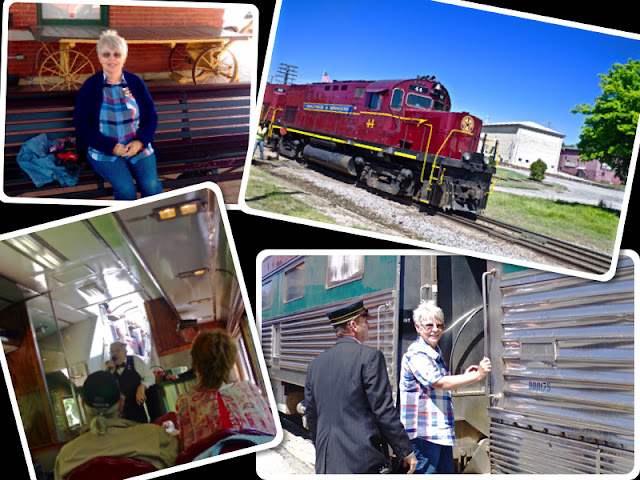 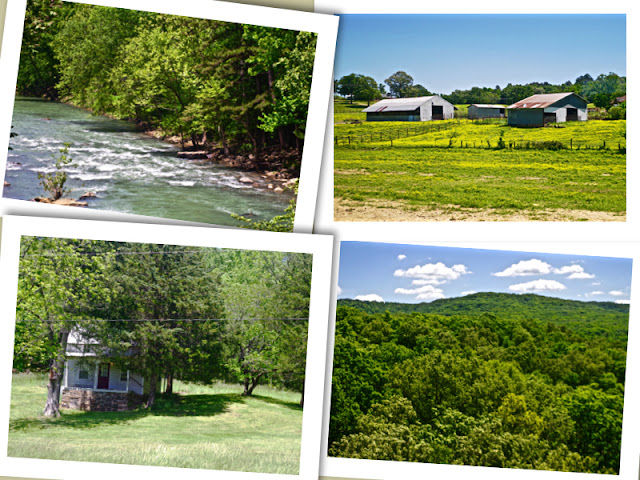 From there we moved camp, and traveled north to stay a few days in Fayetteville.  We chose this town because it seemed "central" to several small towns in the area.  I had pulled my back out a few days earlier, and was having some difficulty walking much, so this turned out to be an okay place for a couple of days, as there really wasn't much to see in Fayetteville itself.

Our real interest was going to see where Sam Walton opened his 5 & 10 in Bentonville back in 1950, which is now a museum.  I had read his biography and thought it would be fun to see "The birthplace of Walmart".  Why not, right?  ;-)   As timing would have it, that weekend (we came on Friday afternoon) was the "2nd Annual Bentonville Film Festival hosted by Genna Davis.  Luckily, most of the festivities were not really going on until Sat & Sun, so it wasn't to crowded yet.  They still had some things happening, film crews walking around, booths set up, a farmer's market happening, and other fun stuff going on, but not to bad, just kind of fun, not crazy...yet.

The Walmart Museum was cute, pretty much what I expected.  You first enter through a very small 5 & 10 cent store, with some of the "old time" merchandise for sale (fun!), then you go on through to exhibits showing his history, his office, his truck, a model of his plane, etc.  Then you exit through the Soda Fountain where you can order 50's style sodas, ice cream, etc.  We had a soda and took it outside and wandered around the quaint town square and watched the various activities of the day.  It is a darling town, you almost felt like it was 1950 again... 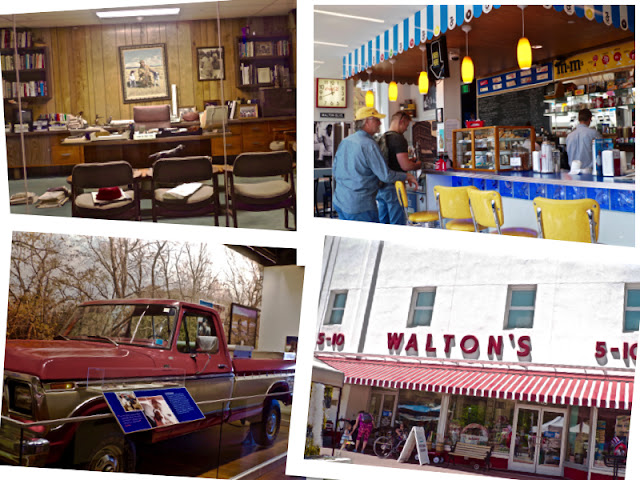 We left Bentonville and drove on to Eureka Springs to spend the rest of the day.  What a great town!  I wished my back had been in better shape, and we had had more time, because this little town sure could take a whole weekend to enjoy!  So many cute shops and pretty buildings to explore and take pictures of, but lots of walking up and down brick walks & hills.  At one time this area was known for it's "healing waters" and had natural springs flowing just about everywhere, now they are gone.  What's left is a tourist mecca of B&B's in beautiful old Victorian homes, gorgeous scenery, lots of quaint shops and eateries and probably some nice hikes in those lovely woods too.  A place worth visiting again someday... 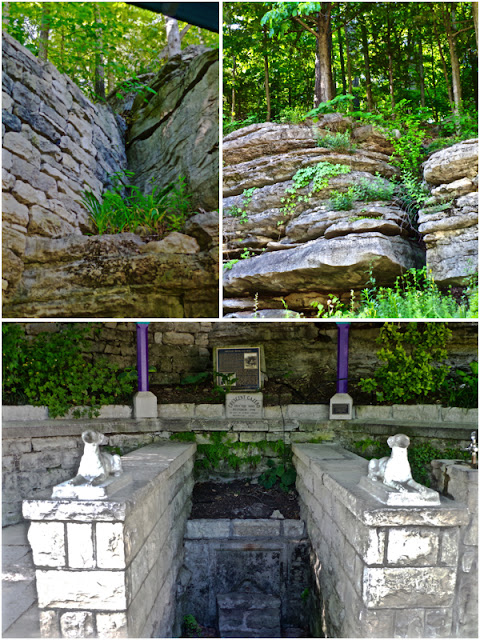 From here, we're heading on to more "healing waters", Hot Springs AR!  Those are still happening tho.  We'll spend a few days there, then on to the Capitol, maybe even stop and dig for diamonds along the way...we'll see, you never know about us!  I'll save all that for "part two", as this seems to be getting pretty long and we have days and days yet of our "Arkansas Adventures" left to enjoy!

...kicking back in Arkansas, Marie