A beautiful day on the lake!

We had a "free day" the other day and one of the couples that we are visiting suggested that we take a day trip somewhere.  They hadn't been doing them since they arrived in Surprise and asked me to come up with a trip for us to do the next day.  I did a little "web search" and discovered that about an hour from here was a boat tour of Lake Saguaro that sounded like just the ticket!

The weather was perfect (just under 80 degrees) so off we went!  We got to Mesa about 11:30 a.m. and the guys dropped us ladies off at the ticket booth that already had a long line in front of it for the 12:30 p.m. tour while they went in search of a parking spot.  By the time we finally made it to the window, they were sold out of the 12:30 trip, but were selling tickets for the 2:45 p.m.  They had a nice looking restaurant at the marina, so we decided that worked out just fine, we would all have lunch, then take that later tour, so bought our tickets and went over to the restaurant!

We were seated right away "inside", as all the patio seats were full (pretty day that it was).  Got our drinks right away and ordered from an interesting menu.  They were hopping!  We waited patiently, after all, we had plenty of time.  And time went by...and by...and by.  Finally, somewhere after 1:00 p.m. we were able to grab our illusive waiter and ask him just when he thought our food might arrive?  "He would check on it".  It finally arrived about 20 minutes later.  Thank goodness we had plenty of time!  At least it was tasty!  ;-)

The boat tour, aboard the Desert Belle was fully narrated and done quite well, by and wonderful captain who told us all kinds of interesting things, not only about the lake but about the surrounding area as well. 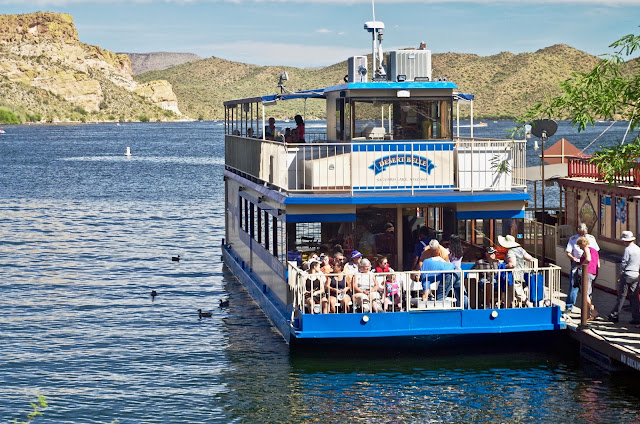 Lake Saguaro is formed by damming the Salt River and is rare in that it is an arch dam and not connected to a mountain or hillside on either side of the dam.  It was completed in 1930. 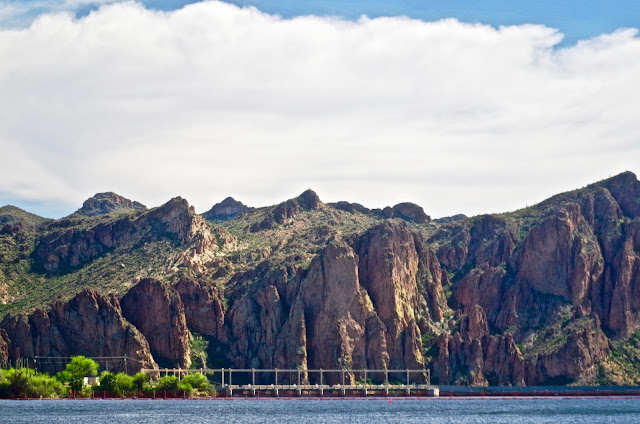 One of the interesting things the captain pointed out along the was was a large rock that had lime green lichen growing on it.  He explained that the only time you will see that color it when it's "welded tuff".   This is formed only on volcanic rock.  Pretty neat. 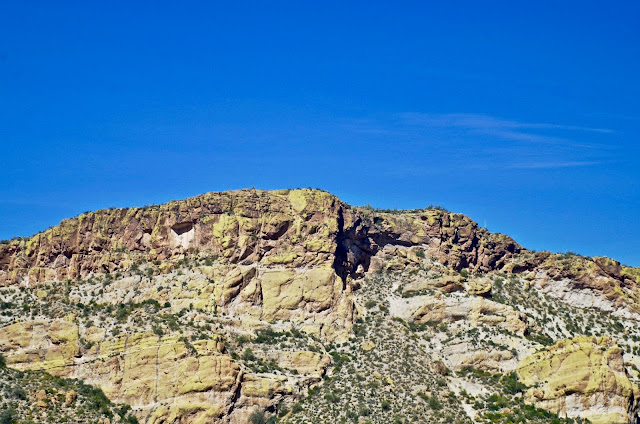 Also "left by the volcano" was this little bitty island that they had to put a small light on so that boats wouldn't run into it (I thought they should have put a cute little lighthouse myself!).  They just call it "Shiprock". 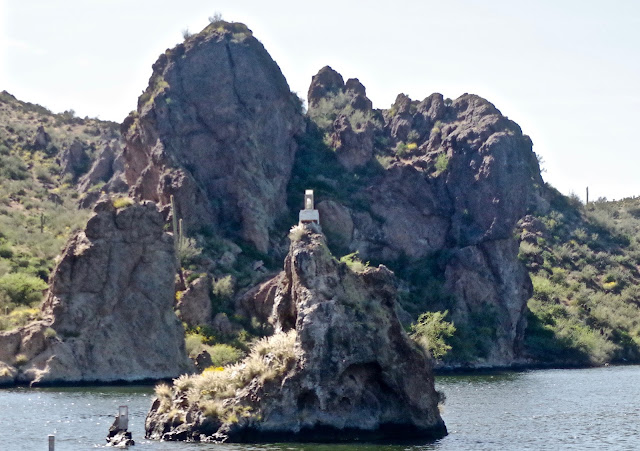 Of course the Brittlebush was in bloom everywhere!  Here are a couple of my favorite shots.  One was at the parking lot before we loaded, the other along the lake... 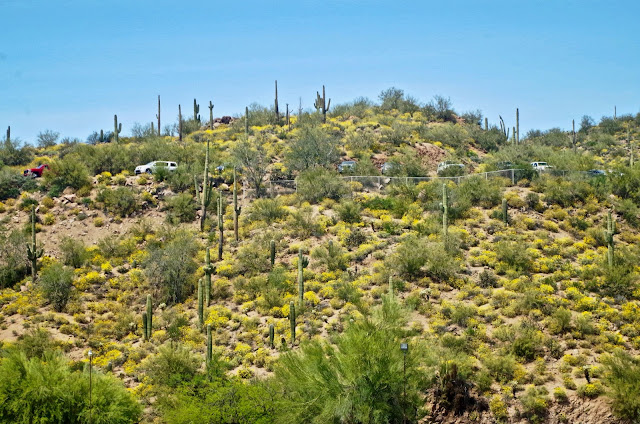 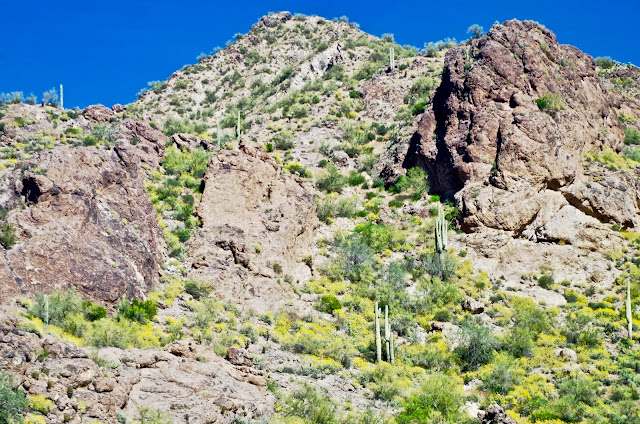 The lake wasn't named "Saguaro" for nothing!  They were everywhere...from "lone" ones to "meadows" full of them... 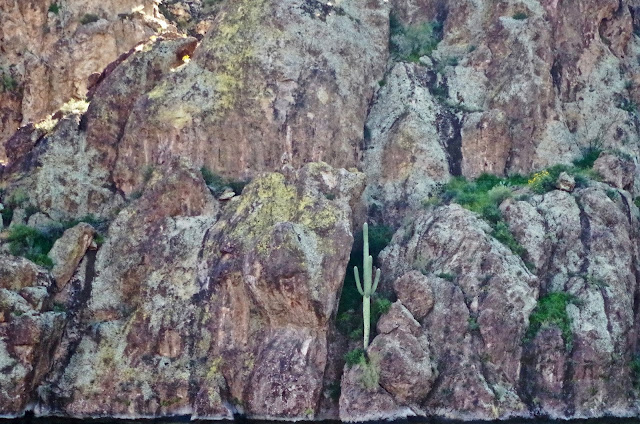 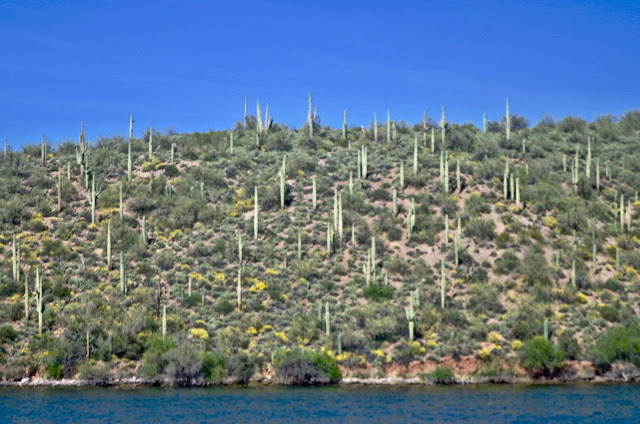 They even had a rare "Crested Saguaro" to show off! 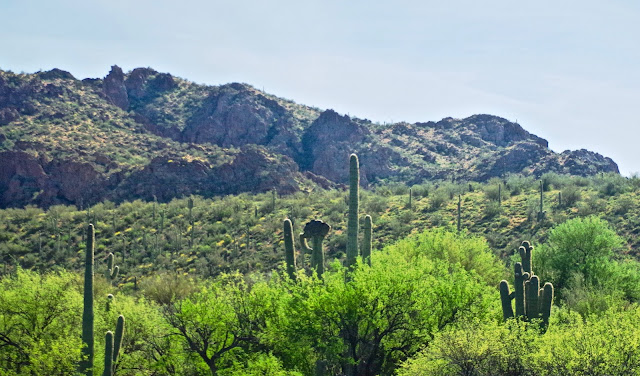 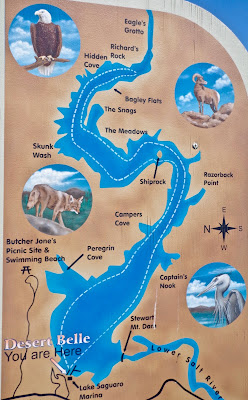 All in all, it was a lovely day, with beautiful sights to see, cool breezes and fun learning about new things!  Well worth the trip!
...kicking back in Arizona,   Marie