Time for a change…

Every now and then, it’s time for a change.  Even when one has a “sticks & bricks” home, people like to change things…you paint walls, buy new furniture, rugs, even remodel a room.  Well, it’s no different living in an RV!  One gets tired of looking at the same old surroundings after 5 1/2 years!


Many of our friends over the years have either bought new RVs or even traded their RVs in for something else.  We aren’t ready to do that, so instead, I just “freshened” it up a little!  “It was time” I told my husband, who always thinks things look just fine the way they are.

So, knowing that we were going to be in one spot for three months, and with girlfriends who were experienced and handy in changing out old valences with new ones, I had it all planned out!  Now, all I needed was the right material and the right time.  What I hadn’t planned on though was breaking my wrist.  THAT wasn’t in the plan…and put a damper on the process.

The other challenge was our dining chairs.  To cover our old ones, or buy new.  We spend a lot of time in them as we use them while we are on our computers, and sometimes that’s for hours.  They are not the most comfortable, so we decided that we would really prefer new chairs if we could find the right ones…if not, we’d cover the old ones. 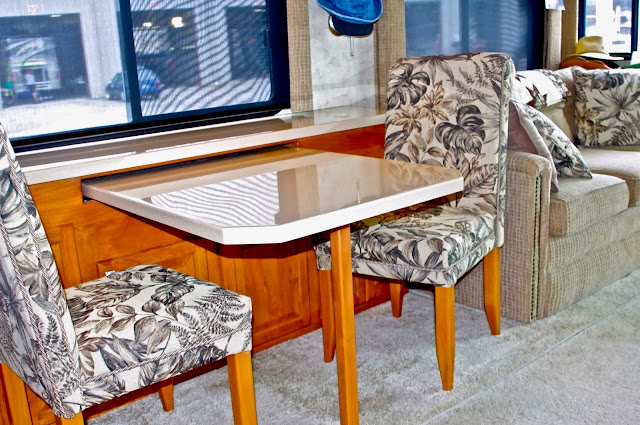 So, off we went shopping!  Several stores and weeks later, we were able to find the perfect chairs!  Yea!  So that solved the problem about covering the old chairs.  Then, it was on to finding the material…that too was a success, a lovely “country” look at a nearby JoAnn’s

Now all I needed was to heal enough to help my friend with the work.  Weeks, then months went by and my hand made progress, but it still wasn’t up to doing the labor necessary.  I was getting worried.

With only a few weeks left before we were to leave, my wonderful friend Doloris just bit the bullet and came over one day, surveyed the situation and said “OK, tomorrow I’m bringing over my tools and I’m doing it, you can just watch”.  So she did.  My small contribution was holding up a piece or two while she tucked and pinched the cloth, and then later going over the tucking, hot-gluing the braiding nice and tight against it all.  She and the guys (they had to take some of the valences off & back on again) did it all.  She also covered my three pillows and made me two arm covers for my chair.  What a sweetheart! 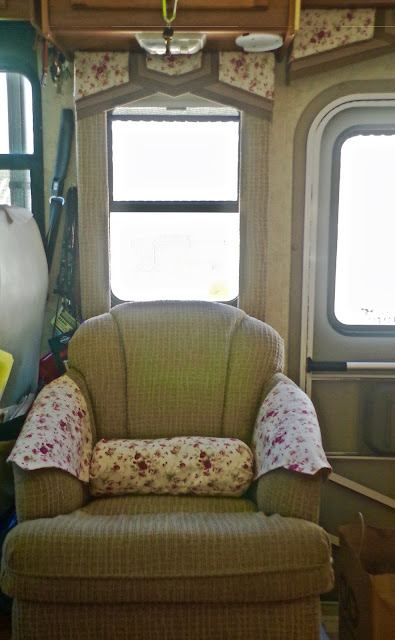 What a wonderful difference my new room looks!  So bright and cheery!  The other style was just too “stuffy” for me, this new pattern is much more my style.  First thing my husband said when he came in and saw the first two windows was “wow, how pretty!”  He may be the last to recognize we need a change, but he will be the first to appreciate it when we do make it! 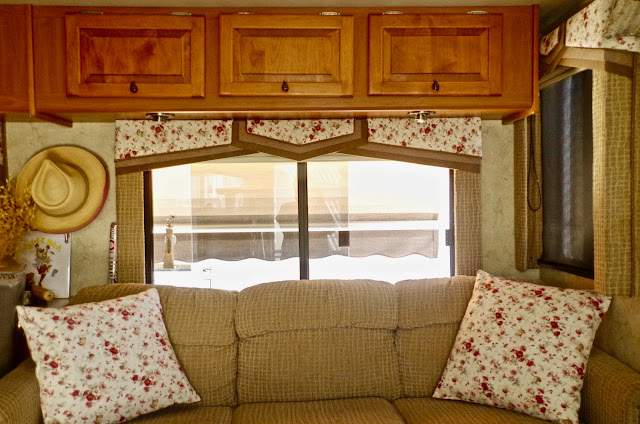 The new chairs are sooo comfortable and make “blogging” so much more a joy as I sit here, no more back aches… 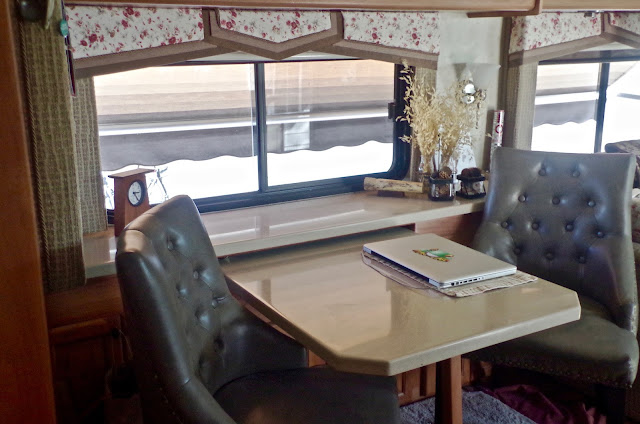 Kicking back in Arizona,  Marie
Posted by Marie