FMCA's Rally in the Valley

We just got back from Chandler Arizona where FMCA (Family Motor Coach Assn.)) held their 95th International Convention and RV Expo.  Five days of meeting up with approximately 5000 other like-minded folk in over 2200 RVs plus another 600 chimerical RVs.  We had great weather (no rain, yea!!), but dusty, dusty, dusty!  Phew!  As it always is with this large of a group, you get parked in large open areas that are covered in gravel or dirt.  Being out in the open, you either get rained on or if lucky not and get the sun and hopefully a breeze...but at the cost of DUST!  We've had the rain, and quite frankly, I'll take the dust over the rain/flood that we've had in the past...;-) 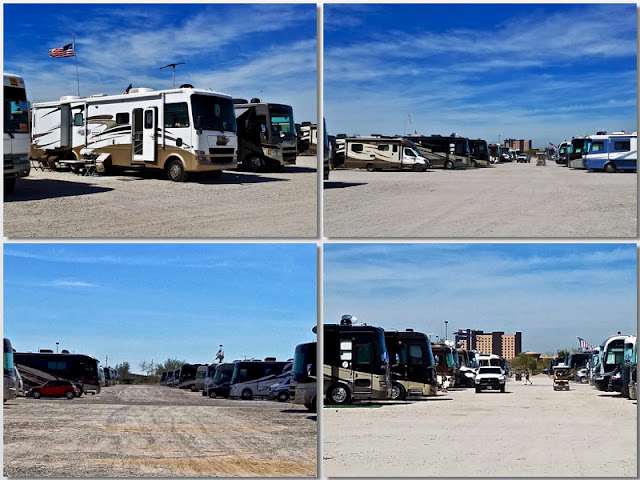 The Rawhide Western Town & Event Center was kind of a fun place to hold the various seminars, even if it was a bit of a walk from our coaches.  They had tram/bus services to & from all day and evening, but when I could, I chose to walk as I needed the exorcise.  Sitting all day in those tiny chairs didn't do much for my posterior!  ;-) 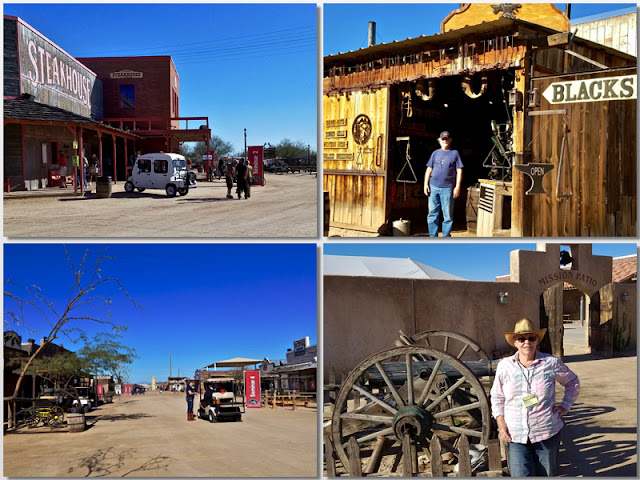 Since we were only coming from Surprise, just an hour away, we thought we would get an early start to the arrivals on Monday and hopefully avoid a lot of the long lines to get into the parking.  Well, we did get there by a little after 11:00 and "in line", but would you believe it took us until well after 3:00 to get settled into our parking spot?  That's how crazy the parking situation was!  In and out of lots, zigging and zagging around and around, it was crazy!  We were caravaning with some friends and had managed to stay together right up to almost the end, when just as they were sending us to "our lot" when one of the parking lot attendees separated us!  We had told, and retold them we were together, but no mind, this particular attendee "didn't care" and separated us anyway!  We kept trying to get back together, but just couldn't seem to make it happen.  Just when we had given up...here they came, driving right up next to us!  The had been led around and around, but ultimately, right to our row!  So, in spite of it all, we ended up OK.  We were suppose to have an additional couple as well, but they ended up selling their RV two weeks ago and getting a "destination cottage", so now was just going to come over on a day pass.

Once we were all settled in, we all set off to go get our "welcome packets" and see where everything was.  Our friends were "first timers" so they, along with our neighbors on the other side were off to their "First Timer Welcome Reception" while Jack and I settled in with a refreshing glass of wine and sat back and enjoyed one of many sunsets! 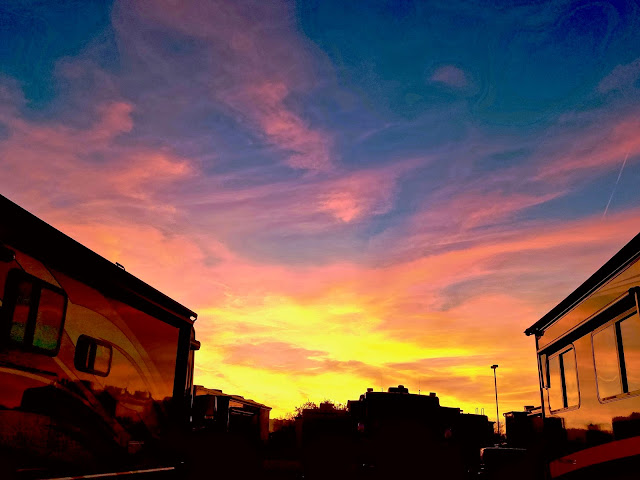 For the next few days it was off to various seminars and to see what the vendors had to sell us!  My interests were mostly about writing including blogging, more info from the Geeks to add to my blogs (maps!  yea), cleaning tips, and household products.  Jack's were understanding our TV, fire & life safety, generator operation & maintenance, suspensions and always a watchful eye as to when the coffee and donuts station opened in the morning! 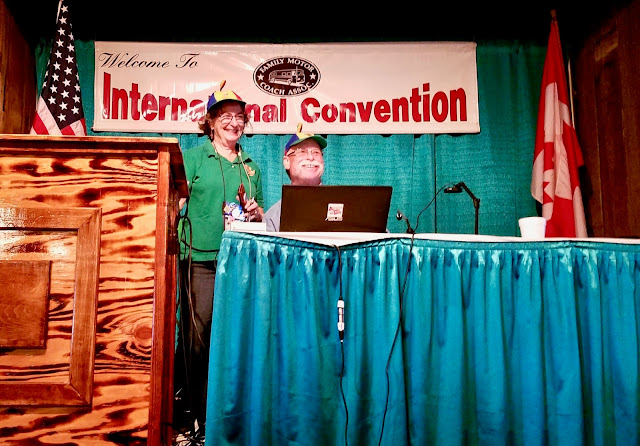 We didn't buy to much this time, and actually won a gift basket from the Almost Heaven MicroFiber folks that had a whole bunch of wonderful things in it!  Lucky us!  Our friends at the rally ended up buying a kit that helps your back realign and our friends that came for the day-only ended up buying battery-assist-stand-up bikes.  So I'd say everyone found a little something to bring home!

The evenings were the best, tho I thought.  The temperatures dropped, and the cool breezes came in.  The sunsets were just beautiful.  We BBQ'd each night and shared wonderful meals together.  Each night had fun entertainment.  Tuesday night was a movie that we skipped and just sat around and enjoyed each other's company and got to know our neighbors.  Wednesday night was a very funny comic by the name of Dick Hardwick.  I haven't laughed that much in a long time.  Afterward Jack and I ended up sitting up another couple of hours talking to our neighbors who are from California.  She recently had surgery on her right wrist too, so we chuckled about both of us being "handicapped".  She is just about ready to retire and they are thinking of going full time very soon, selling their California home (they still have one in Prescott AZ tho).  Super nice folks. 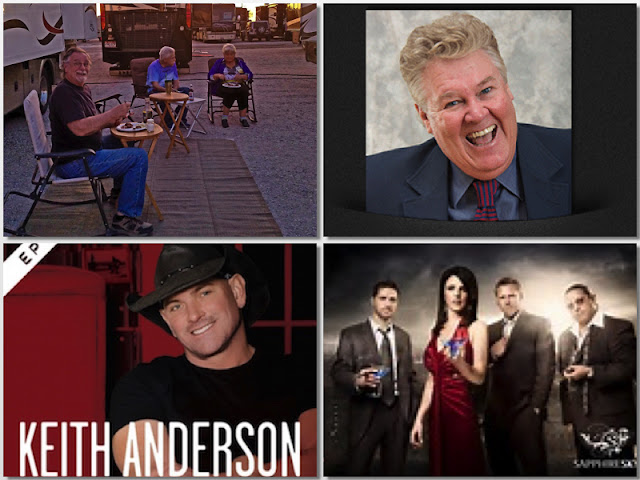 Thursday and Friday were music nights.  Keith Anderson and his band played on Thursday and was a bit loud and probably and bit more of the "electric guitar" than some of the older folks could handle, so he lost about 100 or so as he played.  The crowd was a bit smaller on Friday night as about a third of the attendees decided to leave early, but boy did they miss a good show!  The entertainment, Sapphire Sky band was fantastic!  What a great band!  They put out a dance floor and it was full all night (we even got out for a few dances!).  Fun, energetic, easy to dance to, not to loud, just a great happy group.  They played for two hours and no one left early!  A great way to end the event.

It was a nice break from our stay at Happy Trails in Surprise and my twice weekly physical therapy appointments.  The chill of the last few months have definitely left us and "summer in the west" has arrived so out with the sweats and on with the shorts and bathing suits!  ;-)

With only three more weeks here, it's time to plan our next adventures...we know we are heading to Lake Havasu for a few days, but after that??  Hm mm

...kicking back in Arizona, Marie