Sometimes you just have to go dig in the dirt to have some fun!  At least that's what we told ourselves the other day!  ;-)

We stopped in Hot Springs Arkansas for a few days, and since we'd been here before and "seen all the sights" we decided that the "one we had missed" was just back up the road a bit, so, "why not?"  It was the Crater of Diamonds State Park in Murfreesboro Arkansas.  We knew about it last time, and thought about going, but it had started to rain, so chose not to.  Our campsite neighbors had gone the day before and had shared that it had "been fun".  They hadn't found any diamonds, but had a good time trying.  We tucked it in the back of our minds if we ever came back here. Soooo... 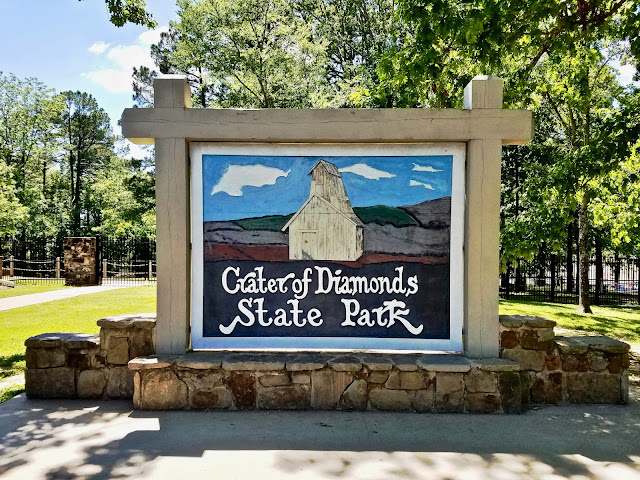 The weather's been "iffy", and we figured we had one really good, sunny day, so we decided we would jump on it and take the drive to Murfreesboro, which is about an hour and half from where we are staying in Hot Springs.  So, we got into our grungiest clothes & shoes and off we went!

When we arrived, Jack was surprised that the parking lot was already half full (I wasn't, people like to "try their luck!")  We paid our fee, rented our supplies (bucket, shovel, and two sizes of screens) and off we went to their very large field!  Even though there were several dozen people there, you couldn't hardly tell, as the field is so large, it could hold hundreds and not feel crowded.

Once we filled our bucket up, we brought it over to the washing station and began the process of rinsing the dirt through the screens to see what minerals were left behind.  Two kids playing in the mud!  Hadn't done this since my kids were little!  ;-) 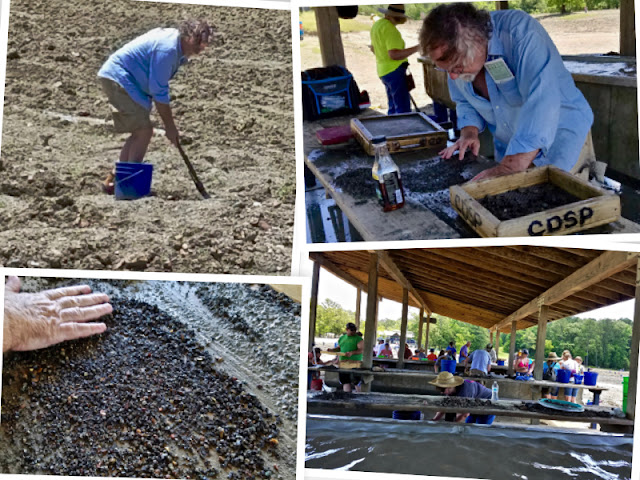 While Jack searched for the "diamonds" (in the little stones) I went through the larger rocks and pulled out some "pretty stones" that I decided would make a nice bracelet for each of my granddaughters (since we weren't finding any diamonds!). 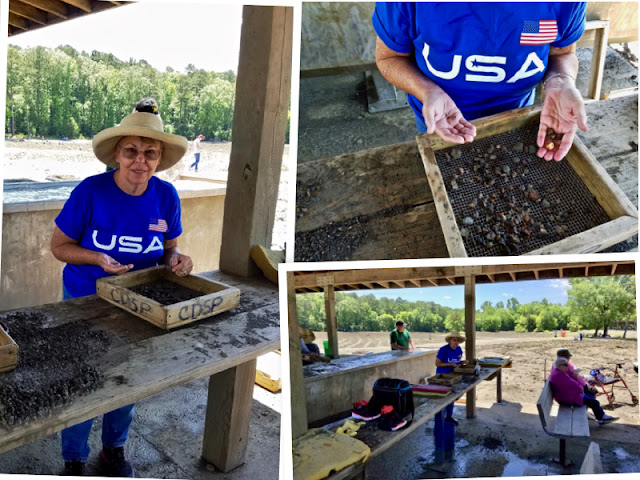 We continued to do this process for a few hours until we agreed we had had enough fun for the day!  ;-)  We bid "adieu" to the two fellows near us (who were avid diamond hunters) and let them "have at it" and went to see what we did unearth.

Turned out, I had collected some lovely pieces of Jasper, and a few small pieces of Barite, & Calcite.  Once I set them in a rock tumbler, they will polish up nicely and make a nice bracelet for my sweet granddaughters and I can tell them I found them myself!  Ha!

After we washed ourselves off as best we could, we headed back to Hot Springs to a "World Renowned Bar-B-Que" Restaurant, called McClards.  It's been written up in a number of magazines an books, including my 1000 Places to See Before You Die.  We both ordered their "ribs, beans & slaw combo". 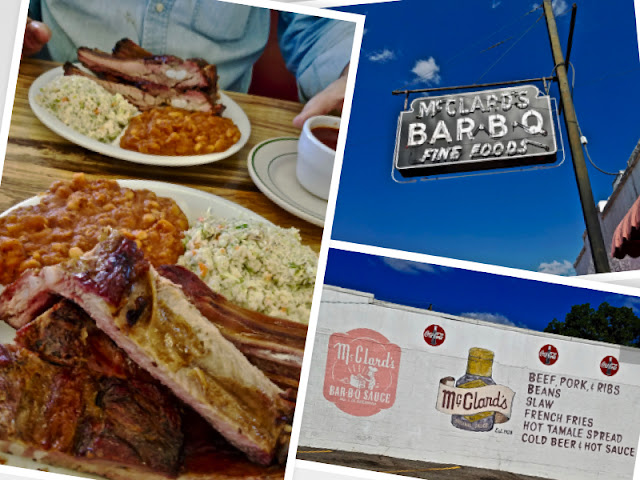 Now, anyone who knows us, knows that we love BBQ, and love checking out BBQ ribs any chance we get.  So far, our most favorite place, hands down, has been Blues City  Cafe in Memphis, and so far, no other place has topped it.  And that includes McClards.  Sorry McClards.  They were pretty good, but a bit to fatty and the sauce a bit on the tart side for me - but that's a matter of taste, I'll admit.  But, as for the ribs themselves, Blues City's are much more lean, and still fall off the bone tender, and that's what counts.   However, I will give McClards an A+ on their beans!  Very different and very tasty!  Yum!  A wonderful way to end the day!

The rain did come, and we just hunkered down, as we do, and read and caught up on things...Stops like this are good for that.  We'll be on our way again tomorrow, rain or shine!

...kicking back in Arkansas,  Marie