There's an old saying "that you can't go home again", that bears truth. When I was 12 & a half (as kids say), I went with my Mother and her new husband to live in Lowell MA for about 15 months. That was a formidable time for me. We arrived in winter, with everything covered in snow, to stay with my Grandparents. My Grandparents were both French and living in a part of Lowell that the whole community was French Canadian, so my Grandmother never bothered to learn English, and my Grandfather only broken English. I didn't know French, so "communication" with them was a bit difficult at best. School wasn't very far from their home, but everything looked the same to me, all covered with snow, so I kept getting lost. I finally made a friend who would walk with me, breaking off ice cycles to suck along the way.

I loved my Grandparent's home. It was big, and my room had a feather bed that when I woke up in the morning, I was engulfed by the feathers like a cocoon. It also had an old roll top desk that allowed me to put "treasures" in all the nooks and drawers. The yard outside was the best tho, her back yard was a big vegetable garden along with all kinds of berry bushes, while the very large side yard had fruit trees, lots of flowers and a small pond that had a little bridge over it. My Grandmother would hand me a small bucket and shoosh me out the back door to pick berries that she would then bake into a pie. They also had a great cellar. Half was for my Grandmother's canned goods & pickle barrels, while the other half was my Grandfather's (what we now call a"Man Cave"). He had a shuffleboard & darts, but what was best of all, he collected smoking pipes and had them from floor to ceiling along the walls. He had big over-stuffed chairs and would sit down there and drink and smoke. I loved the smell, and to this day, whenever I step into a cellar, I flash back to my Grandparent's.

After a few months, we moved closer to the city where my Mom worked in one of the mills. She had worked there as a young girl, in the days when girls had to quit school by the 9th grade and go to work in the mills. This time, she worked where they made sweaters and did assembly work, sewing buttons. Looking back, I realize that we had moved to a pretty poor area of Lowell, in their "row houses". Ours backed up to the Merrimack River and I spent many an hour wandering it and sitting under the trees. I made friends with a small group of other "latch-key kids" (even tho that term hadn't been created yet) and received my very first kiss on my 13th birthday! Some pretty dangerous things happened while we lived there and I think my Mom decided it wasn't safe enough for me, so we moved once again, to what I thought was "the country"! Dracut, is actually just next to Lowell, but it felt and looked like a whole other world. When we went house-hunting, we looked at one that was two stories with a big staircase in the front hall, and a small one that lead directly into the kitchen (for servants?). I thought it was really cool. It also came with an upright piano, that was the "selling factor" for me! I begged my Mom to rent this one, and much to my delight, they did. She also got me piano lessons; not that they did me much good.

Months later, I left Massachusetts and returned to California; never to return again. While I was there, I was able to get to know some of my Aunts, Uncles and Cousins; and for years corresponded with them. Then, years later, my Grandparents died, first my Grandfather, then only weeks later, my Grandmother. When my Mother flew back (she had since moved out of Massachusetts as well) for the funeral, she and her brother got into quite an argument. This caused a rift in our family and my relatives stopped keeping in touch with me. I continued to reach out to them, explaining that this was between my Mom and my Uncle, and had nothing to do with me, but to no avail.

A number of years ago, while stationed in Rhode Island, my brother stopped by my Grandparent's home and learned that our Cousin was living there with his family. They visited for just a little bit, as my Cousin was on his way out to attend a wedding. They never talked again.

Well, here we are in Massachusetts, so I decided to go to Lowell and see if I can find any traces of them, or at least see my Grandparent's home one last time. So that's what we did.

I've always remembered my Grandparent's address, so finding the location was easy. The hard part was seeing that it had been torn down, yards gone, and a plain tri-plex had been built in it's place. It was for sale. No use knocking on that door. I just kept staring, not believing what I was seeing. The whole street, the whole neighborhood was old, tired, and run down. Many of the old buildings gone. Afterward, Jack suggested we go find the school. We didn't have to much difficulty and found it pretty quickly (much faster than I did at 12!). It looked so small! When I went there, it seemed so big! It too, looked old and tired. Well, that found, it gave me hope we would be able to track down my other two homes! Nope. No such luck. After driving around and around, I pretty much put together that the row houses had been torn down and a highway was now where they once were. No luck in Dracut either.

That settled, we decided to check out the mills. Many were torn down, some still needed to be, some turned into artist lofts and one large one turned into a museum. We went to the museum where I learned about how tough a "mill girl's" life had been. One of those girls had been my Mother at age 15. When we moved from Lowell to Dracut, it was probably because she lost her job, as that was when the very last mill closed it's doors for good.

I had the chance to talk with a gentleman who has lived in Lowell his whole life. I shared my story with him and he shared that many of the "old neighborhoods" were gone, that even what once was one of the largest communities (French Canadian) had dissipated and now the largest group is Cambodian. The movie theater I had walked to, gone, the church we went to, gone, stores we went to, now something different. The Lowell I knew was no more.

I left Lowell feeling very sad for all the lost treasures...of relations as well as a since of my own history. I now know what Thomas Wolfe meant...and now must move on and only look forward... 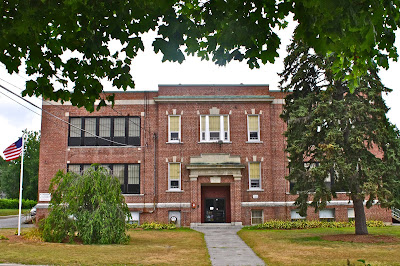 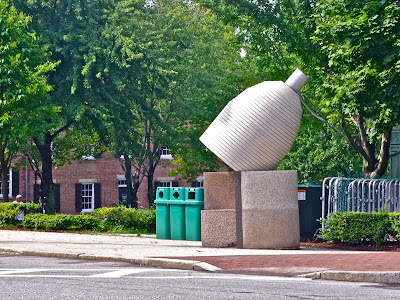 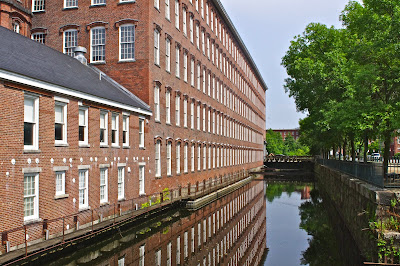 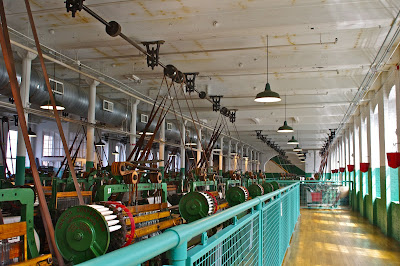 
...on the road in New England, Marie