Often times when we are on the road, we will meet people that ask us where we are heading next, etc. Several times we were asked if we had planned on going into Canada and traveling to Nova Scotia. When we shared that we hadn't plan to, we would get responses like "oh, you should think about it...it's absolutely gorgeous!" When a ranger at the Blue Ridge Mountains told me that, I thought "wow, this area is really beautiful, and if he thinks that Nova Scotia is even more beautiful, then maybe we should go!"

So, we re-routed our trip and added it to our itinerary! We entered Canada from Calais Maine, into New Brunswick. As we always do, we stopped off at the Visitor Information Center to learn what route we should drive to see the "best" of New Brunswick and get us to Nova Scotia. And, as usual, they were very helpful. We learned about the unusual tide changes along the Bay of Fundy and what sites you can see due to this occurrence. So that's the route we decided to take!

We were told that the Bay of Fundy Trail "hugs" the coastline where we can stop and see pristine beaches, tumbling waterfalls, pre-Camrian rocks and towering cliffs at the water's edge. The famous Hopewell Rocks were on this trail as well. So, books, maps and brochures in hand, off we set!

Well...their idea of driving along the coastline, and ours, weren't quite the same. When I think of "driving along the coastline" I think of Route 1/101 along the California coast. You are just a 'stone's throw' from the water. While some of the route was like this, much of it was really more like a mile or two from it. The map's outline made it look like you were right along the edge, but in reality, not so much. So, in order to see places you actually had to leave the "trail" and drive to them. However, that said, the spots we did stop at were GREAT!

Our first glimpse of the "tides", was at a small harbor. It's weird to see boats tied to a dock, but sitting on a mud ocean floor, then to come back later and they are all floating as boats are supposed to do! We made a couple of "special stops" and one was at the Hopewell Rocks. These were first carved by melting glaciers, then sculpted by the worlds highest tides. When the tide is out, you can walk among them, actually walking on the ocean floor! When the tide comes in, it is 40' deep! Yep, you read right, 40 feet I asked a park ranger why so high (all the literature talked about is what causes tides - the gravity of the moon - but that doesn't explain why so high here)and he explained that it's such a narrow channel along the bay, that when the water flows in, it has nowhere else to go, but up! The same goes for St Martin's Sea Caves - fun to walk into at low tide, then later one can kayak into them!

As we drove along the trail, one side was a cliff made by these beautiful purple rocks, mixed in with cream & black ones. I don't know what made them that color (geologist help?) but I couldn't take my eyes off of them. We also climbed down to where a small, but pretty waterfall was flowing. The last stop we made was at a suspension bridge that spans the Salmon River with a main span of approximately 350 feet. Jack didn't go out there with me, but it was really cool to walk across and look down at the river and beyond! I actually like the movement of suspension bridges and enjoy walking across them!

The campground we stayed in that night had a "jam session" which was fun to listen to. Just ordinary folks who happen to play an instrument, gathering together to share some music. Each person took a turn choosing what they wanted to play, it was a nice way to end the day, that and a pretty sunset! Lucky us. 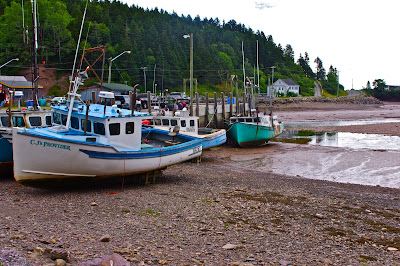 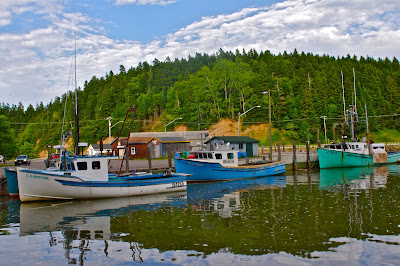 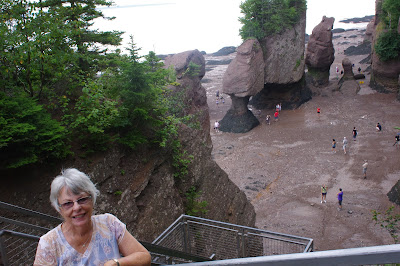 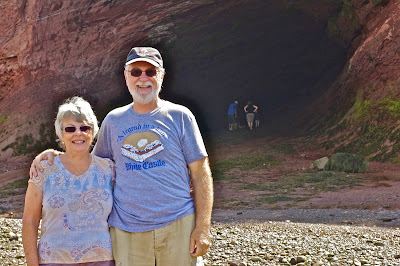 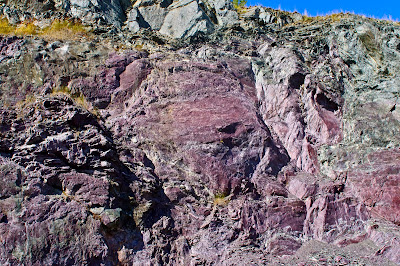 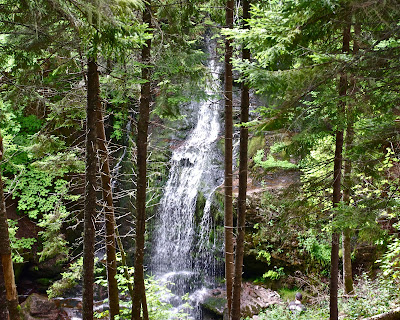 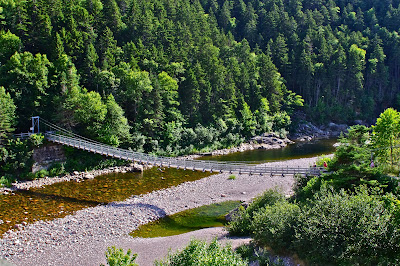