There are just some places you have to see for yourself.  Places you've heard about.  Places you've seen in movies.  Places family or friends have talked about and maybe even shown you pictures of.  They stay in the back of your mind, until one day...your in "the" area and you just have to go and see it!

One such place is the Devils Tower in Wyoming.  First introduction..."Close Encounters of the Third Kind" with Richard Dreyfuss, back in 1977!  Who can forget that one?  Didn't it make you want to see it for yourself?  Did it really exist?  Does it really look like that?  How big is it really?  What's around it?  Tiny questions, small enough to wonder, not big enough to bother researching...just tucked in the back of your mind.  Forgotten, long ago...at least until you find yourself within driving distance of it!

So, there we were, leaving Gillette Wyoming, heading east on I 90, heading straight for that long ago memory.  Reservations had been made weeks ago at the Devils Tower KOA because we had read that they were "the closest campground to the Tower" and that they played the movie every night!  How cool was that?

The first time the Tower came into view, it was a pure "Wow" factor!  It lived up to all the expectations, and more.  The closer we got...the better it was.  This thing is BIG...and beautiful...and right in the middle of nowhere.

After the initial "photo stops", it was time to head to the official Visitor's Center to learn about the Tower and what and where we should see.  So, if you are not up to date on all the "data" on the Tower, only knowing it from the movie, like I was, here's some basic info that I found pretty interesting...

In 1906 President Teddy Roosevelt designated Devils Tower as the nation's first national (and natural) monument.  It's actually the core of a volcano exposed after millions of years of erosion brought on by the Belle Fouche River and the weather.  It stands 865 feet high. Rock climbers love to climb it.  There are loads of rocks and boulders around the base of the tower that are actually broken pieces of columns having fallen from the sides. The Tower is a sacred site to the local Plains Indians and they still practice some of their rituals on the Tower.  The Park Service sets June aside and asks climbers not to do so during this month.  There are various prayer sacks, cloths, dream catchers, etc. tied to the trees during this time as well.

Enough "facts", it was time to go take a walk around it!  They had several nice trails, some easy ones (our kind!) and some longer ones (for the more hardy types).  The day was beautiful, so we started out, camera and hat in the ready.  The path was steep, but they were kind enough to have benches along the way, to rest and just gaze at it.  We also caught sight of a fast moving Great Basin Gopher snake...that we left alone.

As we left the park and headed back down the hill the red sandstone and siltstone cliffs above the Belle Fouche River stood out against the green Ponderosa Pine forest east of Devils Tower beautifully.

The first and last thing you encounter on the drive is the black-tailed prairie dogs in their own town at the base of Devils Tower.  Those little guys are a hoot!  There are hundreds, well, probably thousands of them scurrying about in and out of the millions of holes they have dug.  They are so used to the tourists that they almost pose for pictures as all of us stop and snap away!  (I had to take some for my grandson, he loves them!)

Our campground was right at the base of the Tower, so we enjoyed the view from all angles, but no matter how often we looked, we never saw any extra-terrestrials! 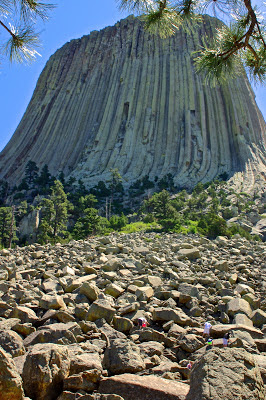 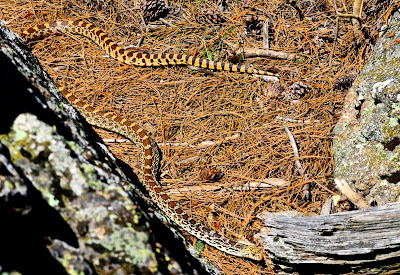 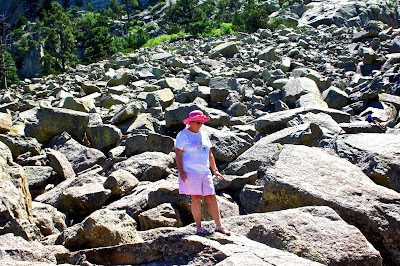 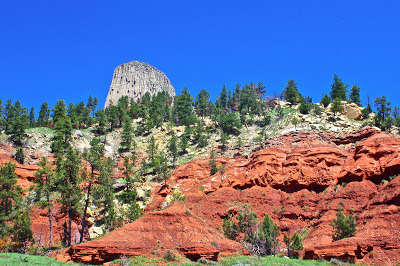 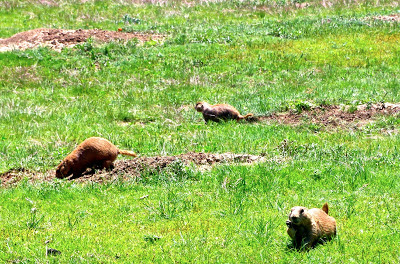 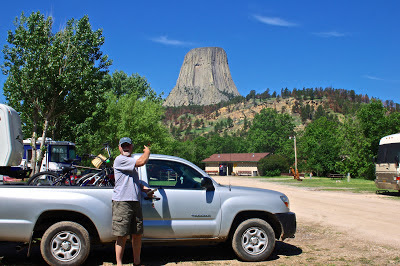 ...on the road in South Dakota,  Marie