Today we ventured out to see some of the beautiful valleys here.  This is where many of the animal sightings are suppose to happen as well.  We weren’t disappointed.  Hayden Valley is a former lake bed that is now only  marshy and impenetrable to most trees, supporting only rich shrubs and grasses favored by bison, elk and springtime grizzlies along with a variety of birds.  The Yellowstone River meanders gently through it in a zig zag sort of way that’s very picturesque.  It’s named after the expedition leader whose 1871 survey led to the establishment of the park the following year (see, I told you this place was steeped in history).

Our first encounter was with bison, of course, but just beyond them were a gaggle of Canadian geese.  Not to much further were some bachelor elk stirring up quite a fuss with the tourists.  Cameras, telephoto lens with tripods, cars parked every which way, all spread out in a real “critter jam” waiting on these two guys to get up and prance around for the “perfect picture”.  One obeyed, the other...sat, and sat, and sat.  I moved on.  Not long after a bison decided to hog the road.  He wasn’t sure which way he wanted to go, but he wasn’t deciding anytime soon.  He just moseyed up and down, back and forth and all around the traffic that also wasn’t sure what to do!  It was actually quite funny to watch and be a part of!  We finally got to turn a corner and leave the rest to deal with him, while we went in search of waterfalls.

There is an area in the park called Canyon Country that contains the Upper Falls, Lower Falls, along with a South Rim, and a North Rim, etc.  There are different loops to drive and pull outs to park in, with  walkways to see the various views of the waterfalls and canyons surrounding them.  This is the prettiest part of the park in my opinion.  I’m really not sure which was prettier, the falls or the canyon.  The canyon walls looked as if someone painted them with all the colors of autumn.  One spot is even named “Artist Point” by the park photographer FJ Haynes for its superlative scenic views.  Our luck continued as we were leaving one of the pull outs, across the other way, we spotted a beautiful wolf!  All alone, just prancing across the grasses with no one noticing but us!  I still had my telephoto lens on, so snap snap, I was so thrilled!

We made an afternoon stop at the Roosevelt Lodge (c1906) to check it out and grab a quick soda.  It started out as a tent camp for President Theodor Roosevelt then in 1919 was built up to the log-style it is today - which is to say, is still pretty basic.  It’s the least “fancy” of the lodges in the park.   They feature chuck wagon cookouts and horse rides here too.

From here we drove through Lamar Valley which is supposed to be one of the park’s premier wildlife viewing areas...but we saw nothing but mixed sage and grasslands, pretty, but no animals.  Drove on to see the 132’ Tower Falls, lovely, then onto the small town of Mammoth Village, quite an unusual place it turned out to be.  First off, there are elk everywhere.  Cows, some with calves, all munching on grass or just laying about.  It was quite obvious this was their town, to go where they wanted and no one (was allowed) to bother them.  After one gets over that surprise, then there is the hotel.  You feel like you’ve just stepped back in time to the turn of the century with the antique touring cars, soft yellow Mammoth Hot Springs (grand) Hotel and even the town park surrounding it all.  It’s a campus-like historic and administrative heart of the park and the Albright Visitor Center (Horace Albright was park superintendent between 1919-1929 and director to 1933).

A little further on you pass the 45th parallel of latitude - halfway between the equator and the north pole, pretty cool.  (There are several times you pass over the continental divide in the park as well.) We were just a few miles from the North Entrance at Gardiner Montana, so decided to go through it and see that tiny town, and it was, and check out the 1903 Roosevelt Arch.  Nice arch and a nice way to end this day’s excursions. 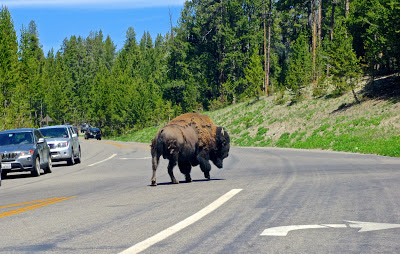 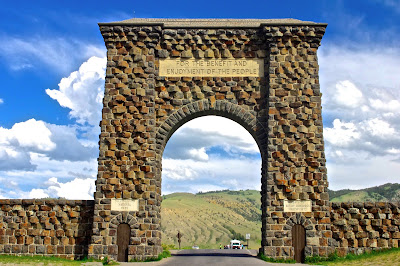