"Go Pack Go!" We all shouted with gusto, and as instructed, listened for the echo...and there it came, WOW!  You could almost see the 80,000 plus fans cheering as their team scored one more TD!  We were a small group of about 10 taking an hour and a half tour of the Lambeau Field, home of the Green Bay Packers Football team in Wisconsin.  You just can't visit Green Bay without going to Lambeau Field whether you are a sports fan or not!  What a great tour it was too.  They have three to choose from, we choose the middle one, not to short & not to long we thought.  You get to go from the luxury suites to view the stadium (and for the best echo effect) to the  players tunnel complete with sound effects of fans cheering as you enter the field itself.  For those of you that know Jack & I, you know then that neither of us are really sports buffs, well, to put it honestly, about the only football we really watch is the Superbowl, and we are lucky to even know who's playing in it the week before, so that tells you something!  Anyway, even we know who Vince Lombardi was, so it was really interesting to hear about the history of not only how he came to the Packers, but how the Packers themselves came to be.

By the time we learned about Curly Lambeau and how the team isn't owned by a "single owner" (because Curly sold shares at $5 each!) and is the only team in the National Football League to be owned by the fans, and saw how beautiful the field was, and the incredible size and unbelievable gift shop (there wasn't anything, and I mean anything-even a truck-that wasn't for sale), it made me want to be a fan!  Another really cool thing, one that you can't help but go "aww" at, is a time-honored tradition that the players have during training, that I don't think any other professional team does...See, their practice field is just one block from Lambeau Field, and prior to practice, young Packers fans line up near the stadium eagerly waiting for players to choose their bike to ride to practice.  The kids run alongside the player carrying his helmet as the player rides their bike over!  Now, I think that's pretty cool!

The field was originally build in 1957 and started out with seating for only 32,150, but over the years has upgraded and enlarged to it's current capacity of 80,735.  Our guide didn't think they could enlarge any further.  So that's probably it, and they sell out ever one of those seats.   I've never experienced anything like it.  The whole town is alive with "Pack Fever".  When you think that all of Green Bay is just over 100,000 people, that means almost everyone goes to the game!  Think about that, what town can say that?  The very cheapest seat is $78 and that was way up in the far corner at the very top, with the most seats costing around $100-$300...and they are all sold out, every game, every year, with a waiting list.  Season tickets are passed down to family members with about 80, yep, only about 80 going on sale a year.  Wow.  That's dedication.  That's love. 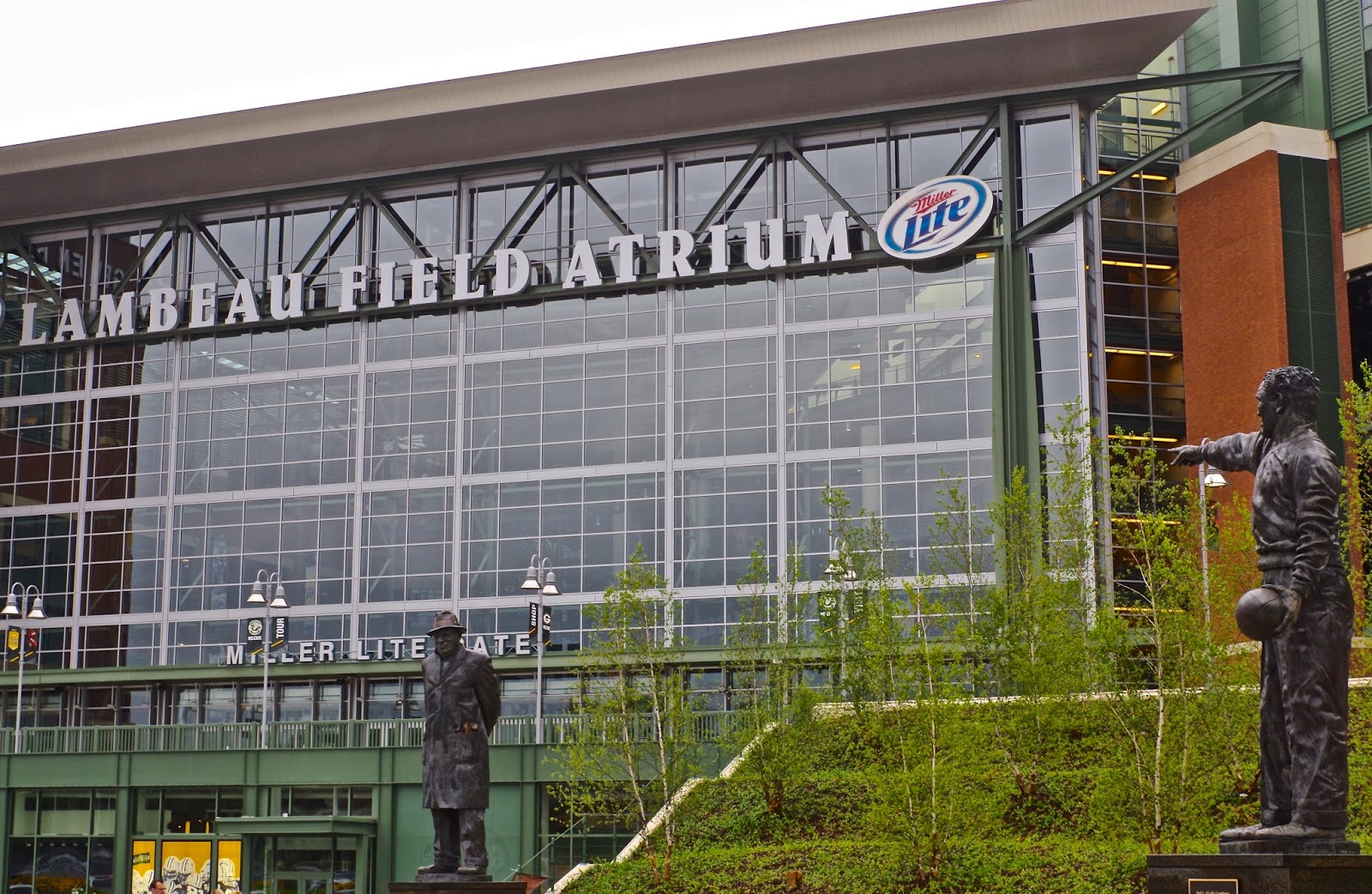 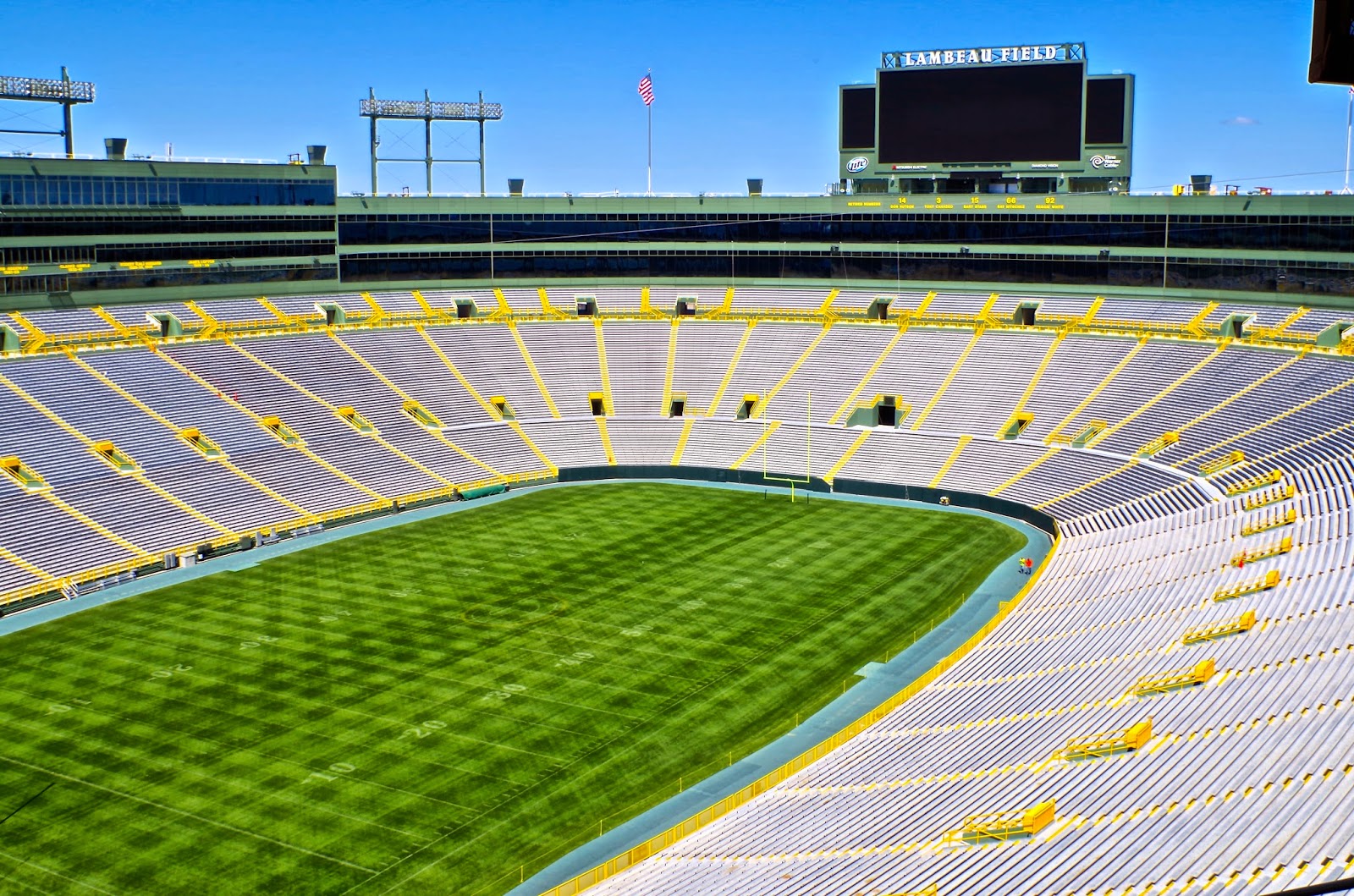 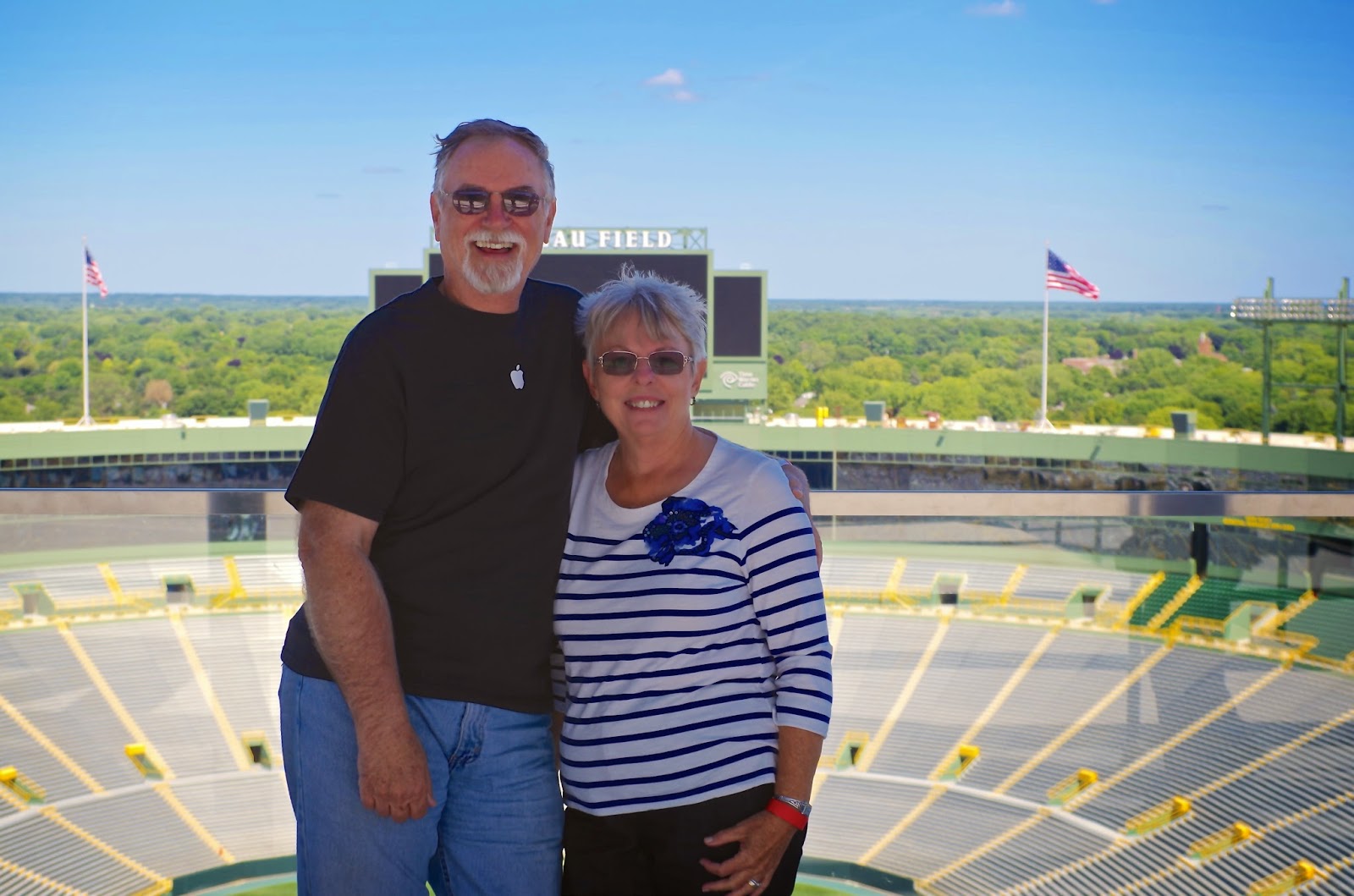 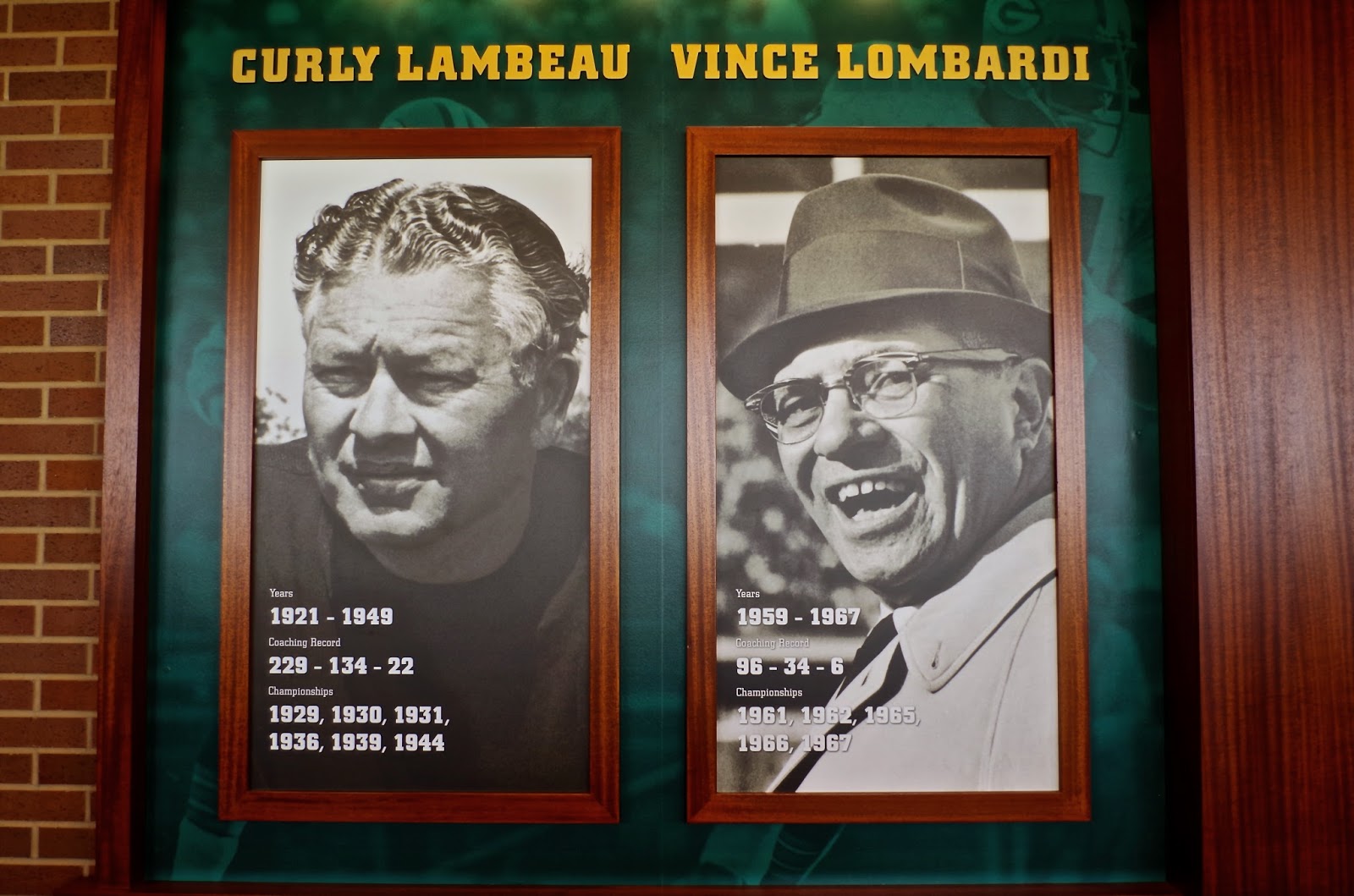 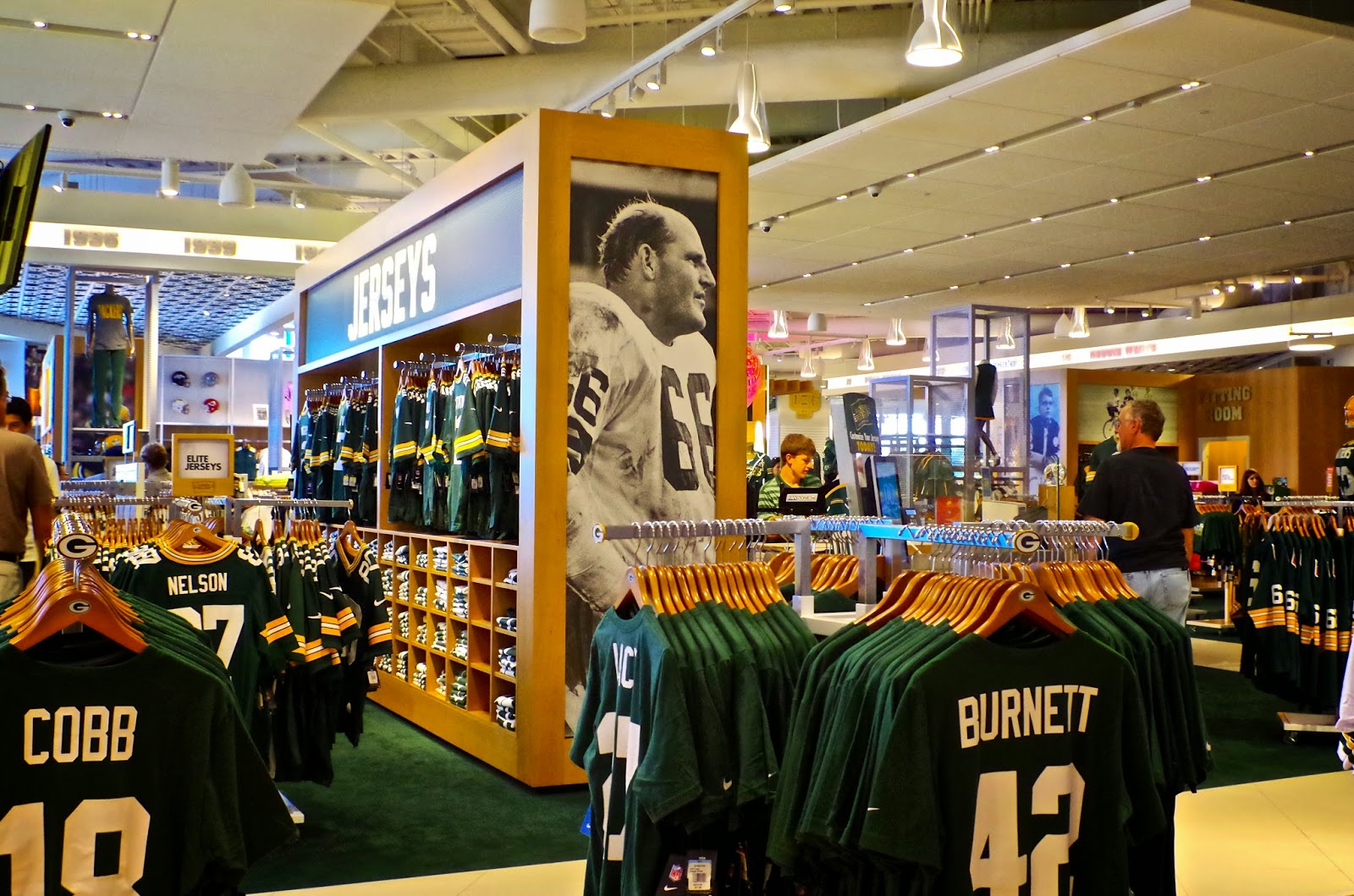 ...kicking back in Wisconsin,  Marie