What do you think when you hear it's time for the summer county fair?  Well, if your from a big area, like Jack and I, where hundreds of thousands of people attend, you expect large crowds, bumper to bumper traffic, long lines for food, elbow to elbow as you walk down row after row of vendors hawking hundreds of items "you just can't live without", some you see year after year (yea!), some you can't wait to see "whats new this year".  Rows and rows of rides in the Fun Zone, multiple barns of animals to gawk at and learn all about, and endless entertainment, all day and all night, always ending with fireworks, of course!  A day filled with excitement, loaded with calories, arms filled with stuff you probably will never use and ended with exhaustion and wonderful memories.

We've spent years going to "our" very big county fair, so naturally, I've wanted to experience what it would be like to visit a small county fair.  The kind I've seen in the movies, where local people bake pies and bring jars of pickles to be judged, where they actually know each other!  So, when I saw that the Marquestte County Fair was starting the day we were about to leave, I suggested we stay on an extra day and go to it, after all, it was "senior day" too!  So, we did, and...what an experience it was!

First off, it wasn't in Marquette...so, we drove, and drove and drove, way out into the country, only stopping a couple of times, until we finally found it, tiny signs and all!  Paid our $1(each) and entered. 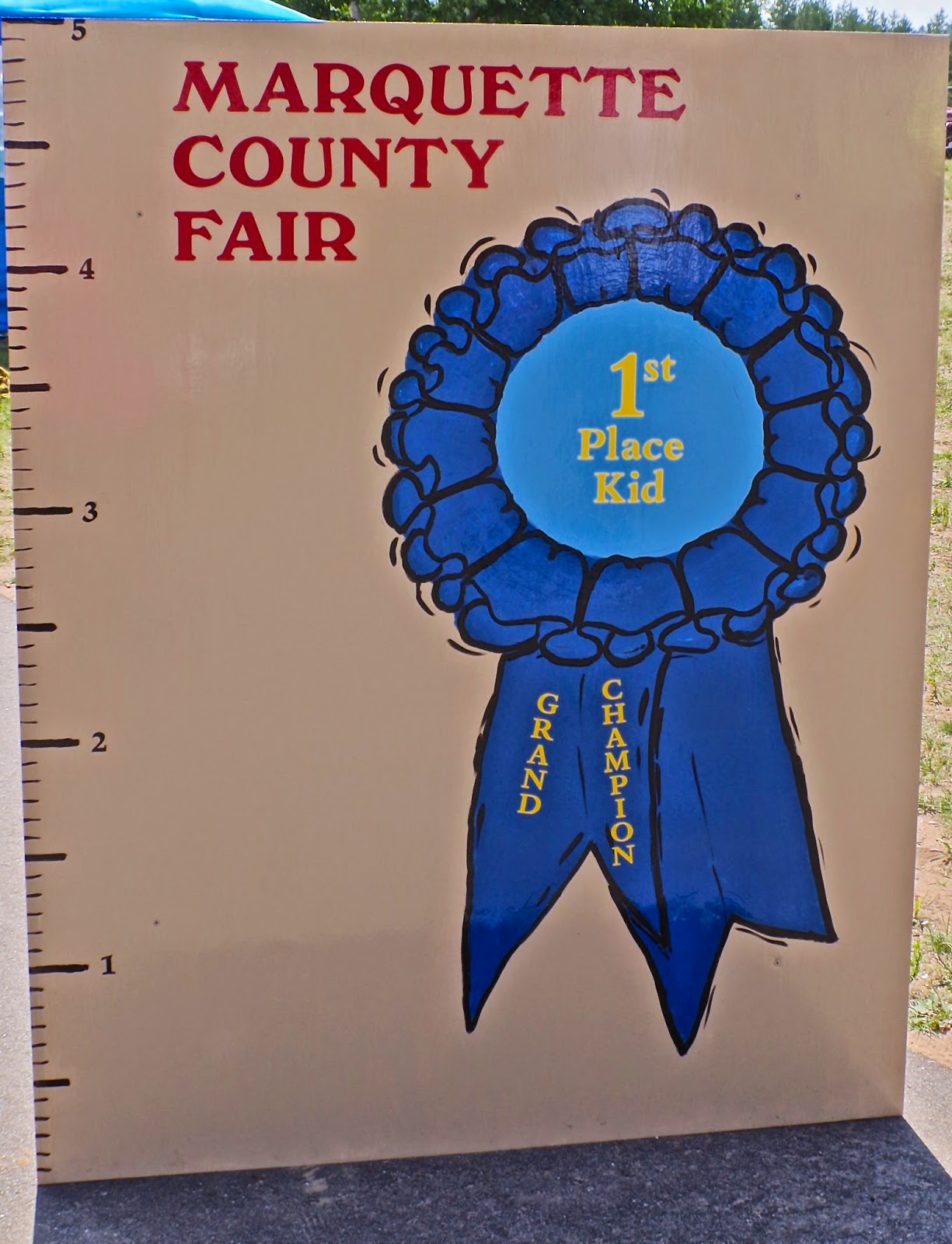 First area was a barn that housed the vendors (they had about 30, maybe?), their "Arts & Crafts" (photos, quilts, knits, sewing, collections, and yes, pickles! etc) vegetables, gardening, and one of the two entertainment scheduled "Wayne the Wizard" Magic Show.  A second barn was attached that had a nice display showing "Treasures of the Past" antiques and collectables, but there sure was plenty of room for the few of us to roam around and see everything!  No "elbow to elbow" rubbing here, and certainly no hawking going on, very quiet, gentle people here. 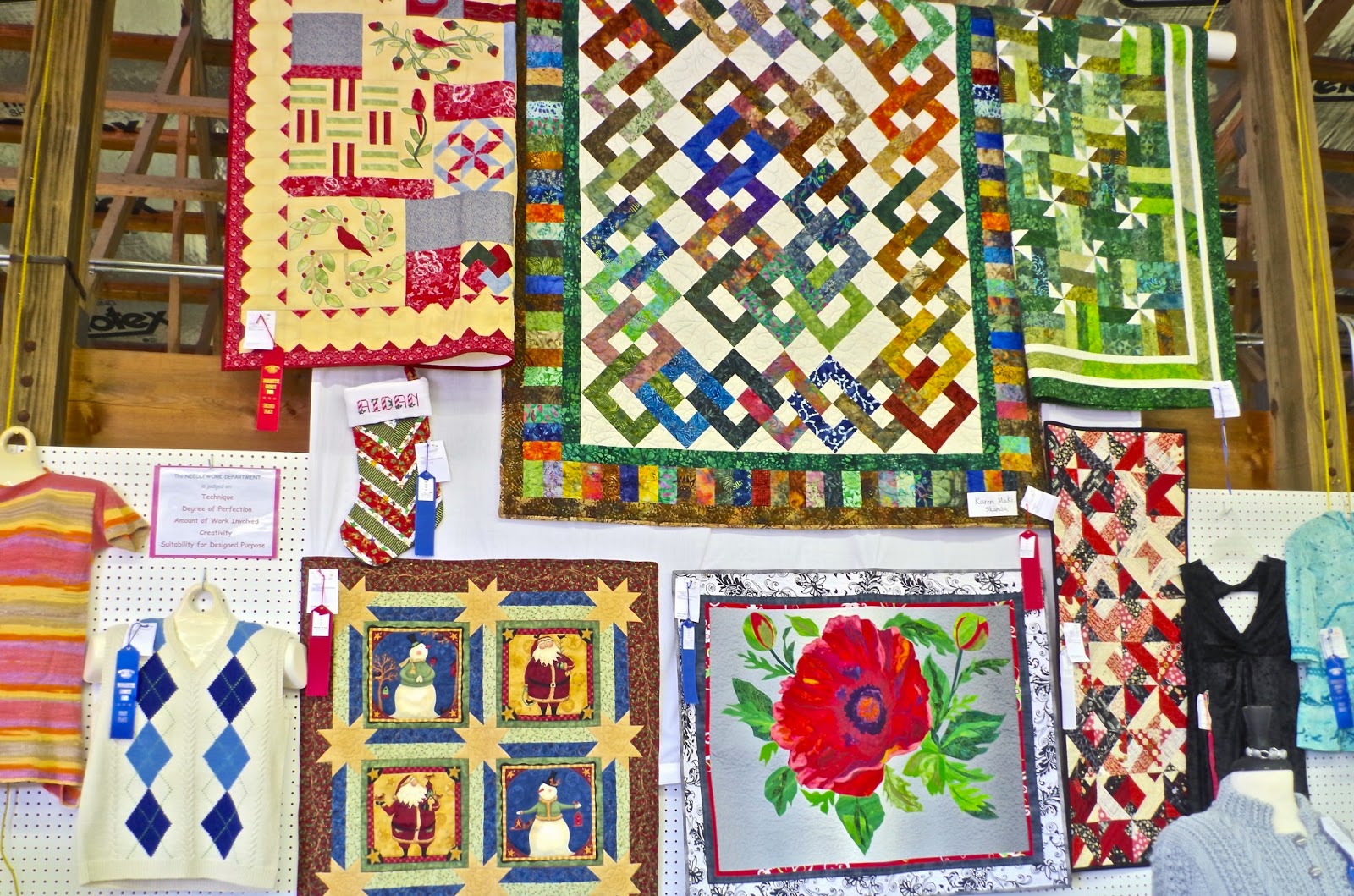 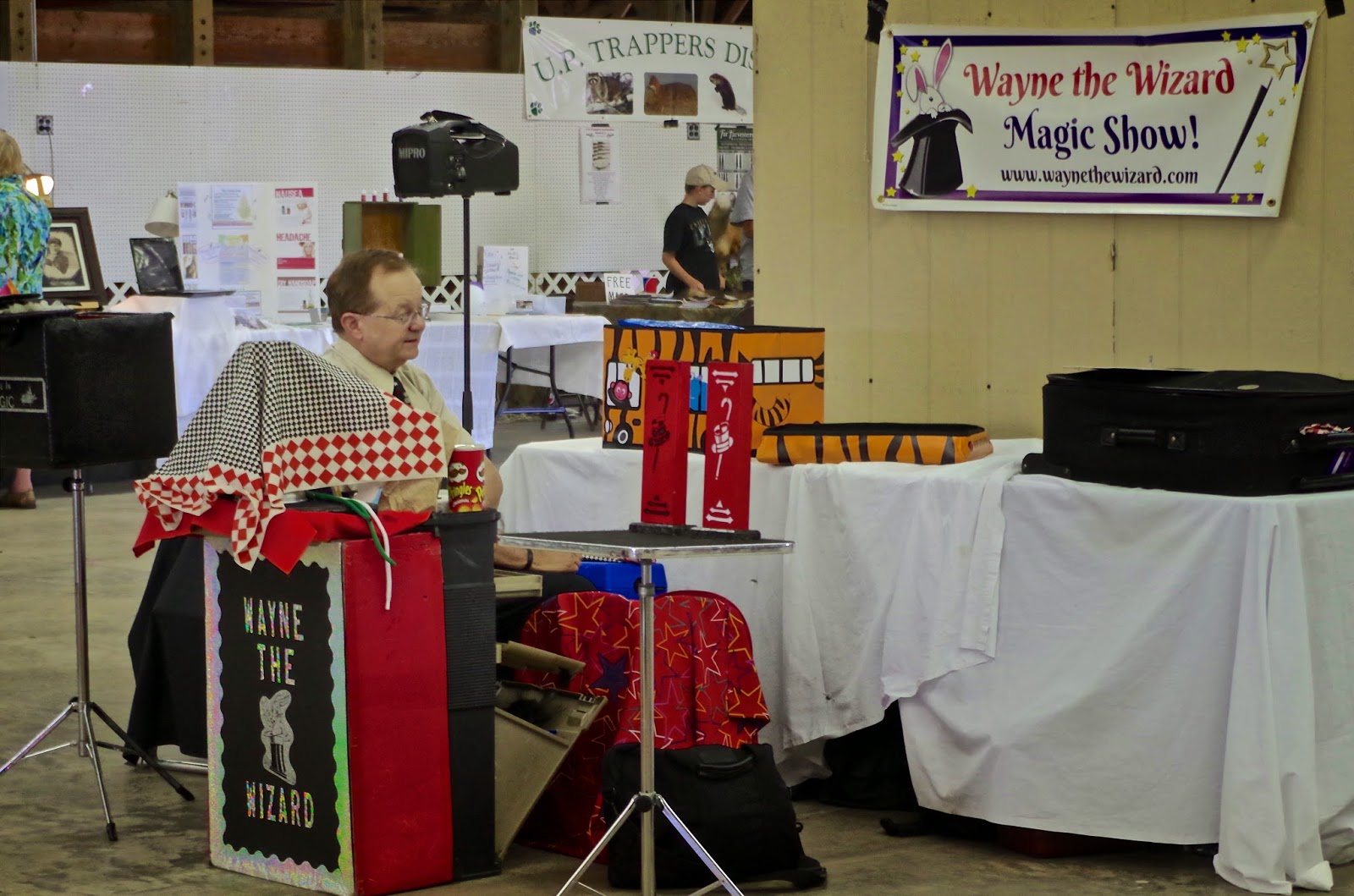 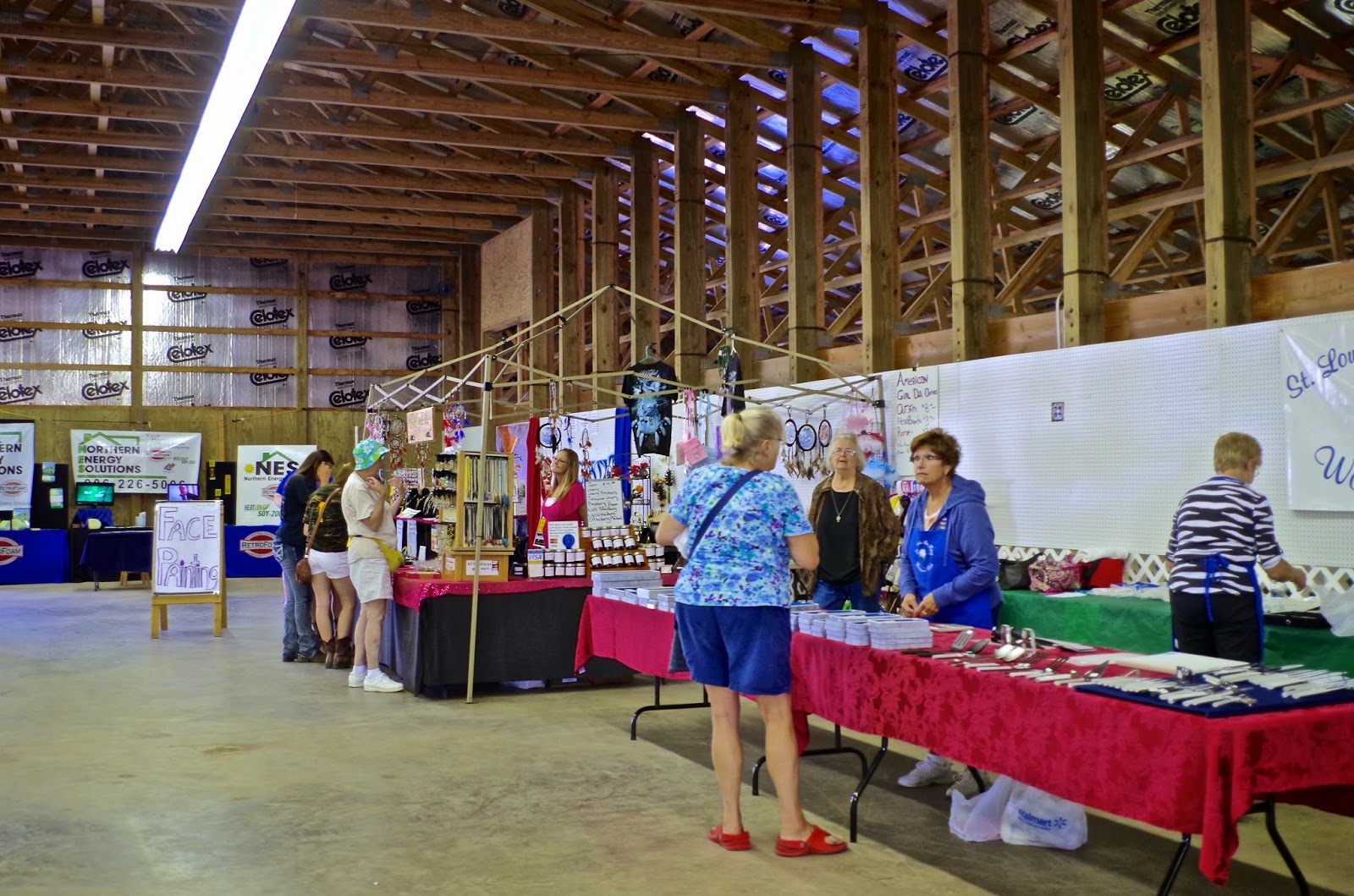 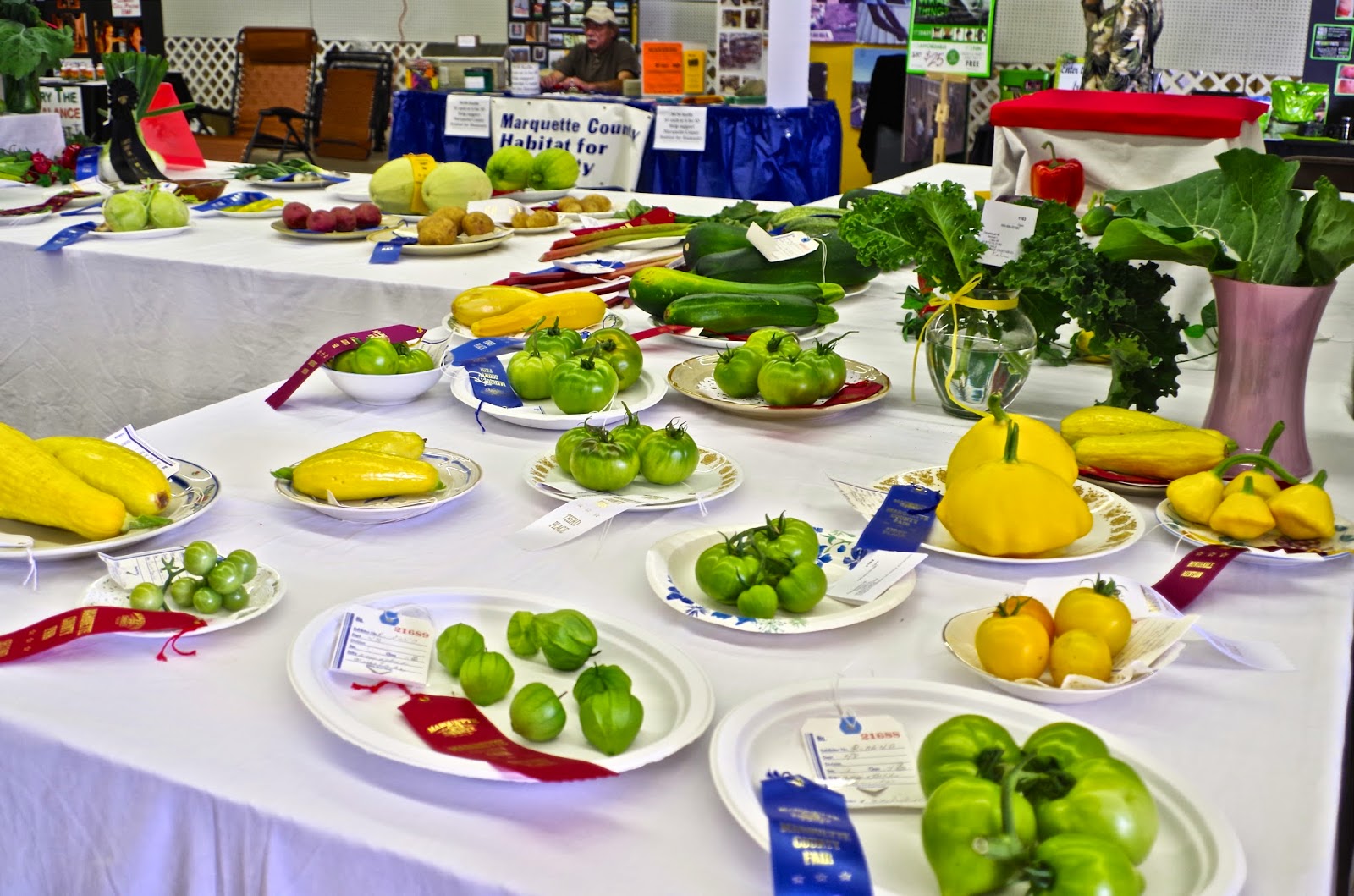 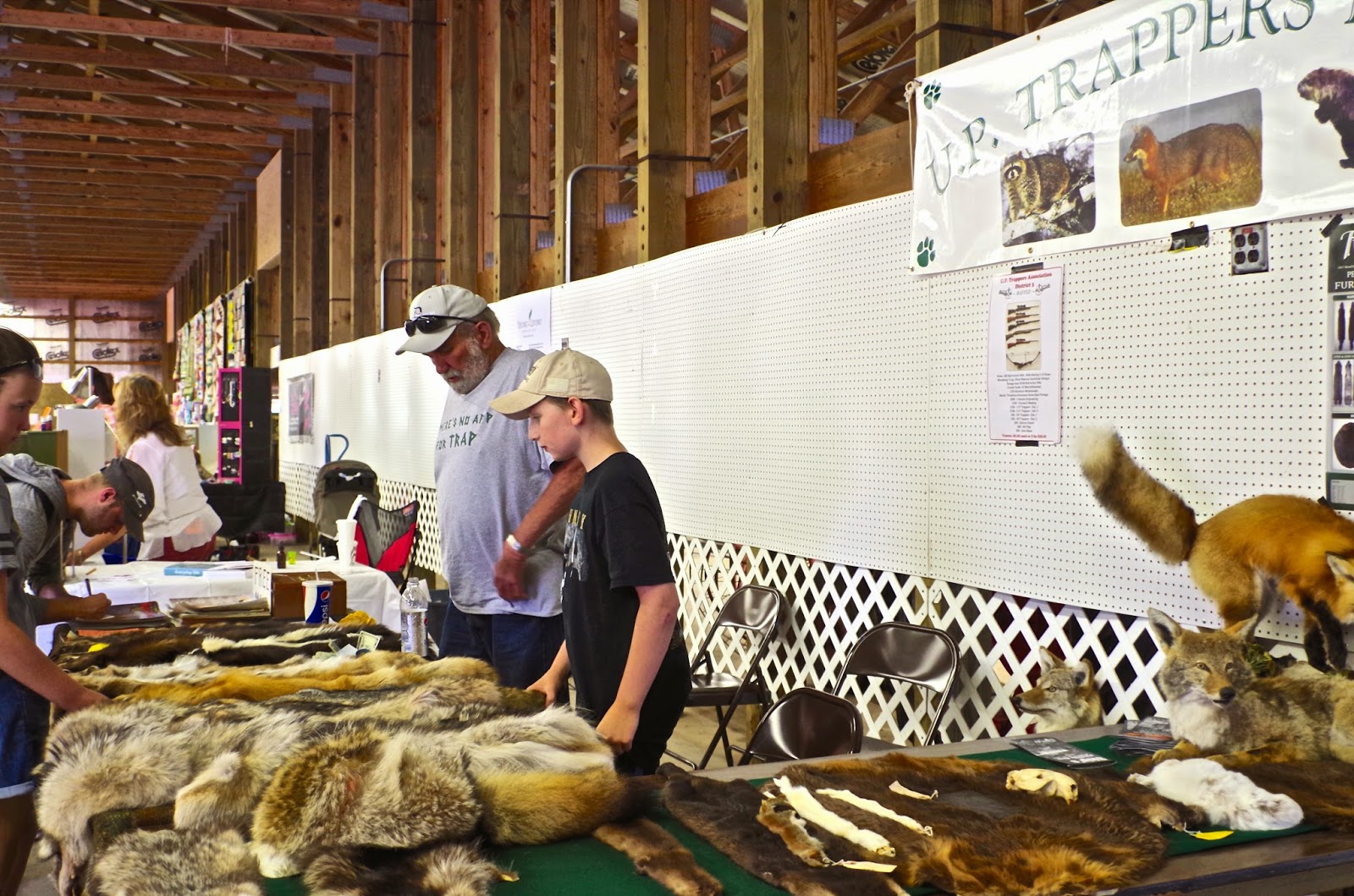 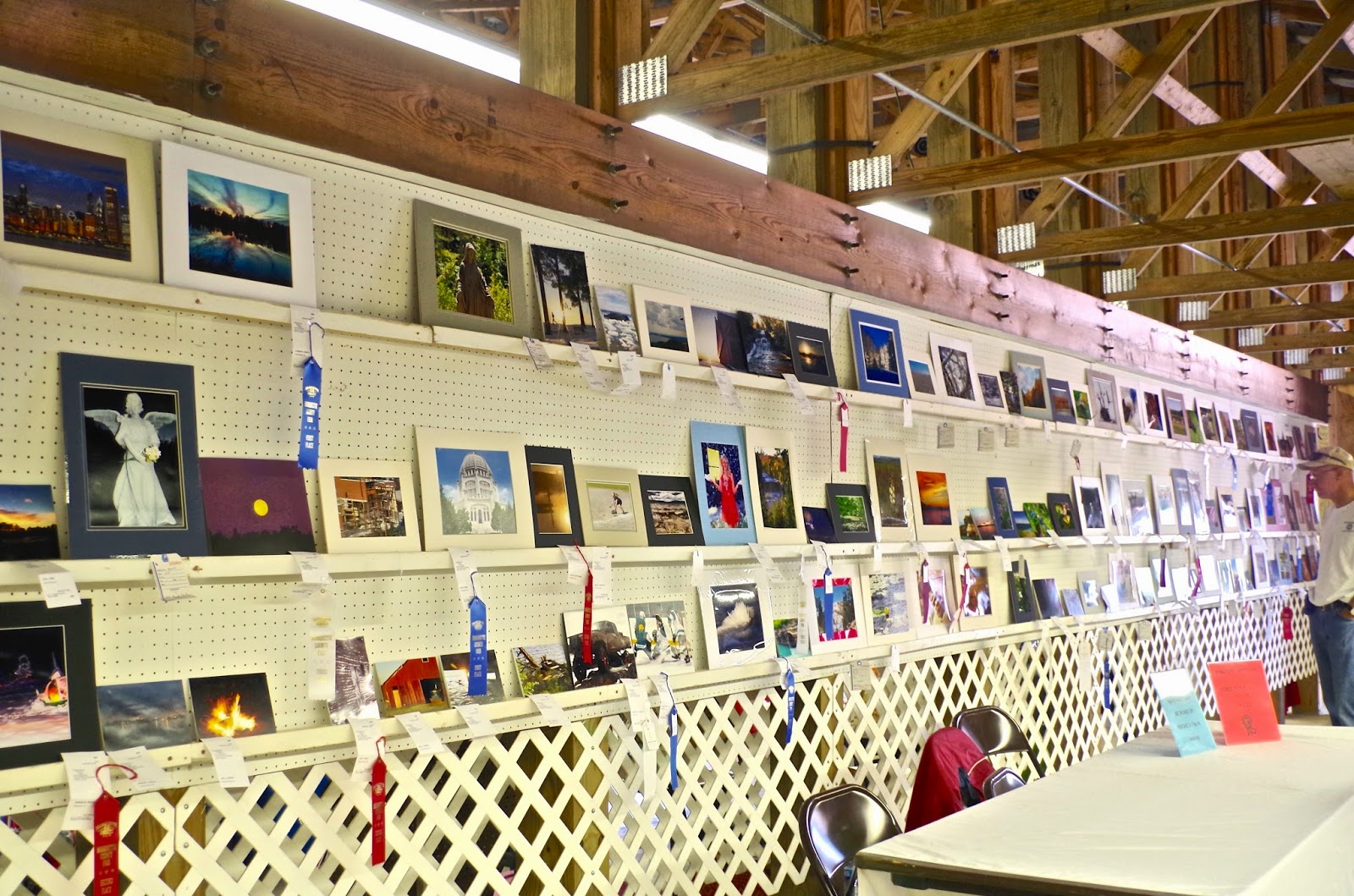 Outside, not much bigger, I had to giggle.  Jack kept hushing me to stop, but I just couldn't help it!  I expected to see "small", just not so "tiny".  The food area was about a dozen spots, at the most, and I know we were there on the first day and all, but I think Jack had to stand in the longest line of, maybe 5 people at lunch time!  We listened to the other entertainment during lunch, which was a trio playing music on the bandstand.  After lunch we wandered over to the animal barns and watched the judging of the 4 H kids and their lambs, which was pretty cool...not that we understood a thing about it, mind you!  I just know that my own grandchildren are in 4 H and work really hard with their own animals and compete in their county fair and really take pride in winning ribbons as well, so it's special when they are standing up there and the judge is rambling off his stuff and the crowd is clapping away at them, so we did too! 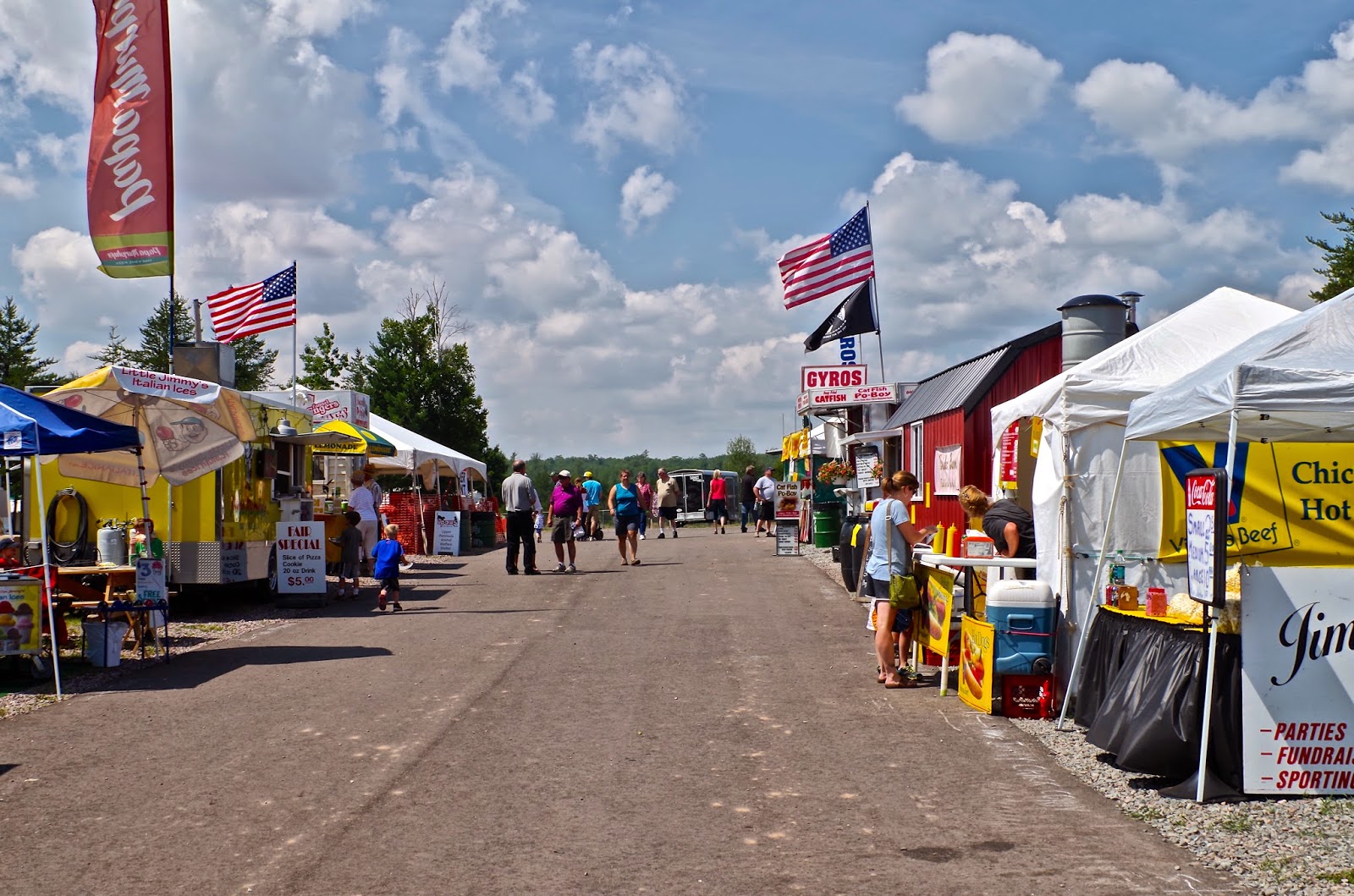 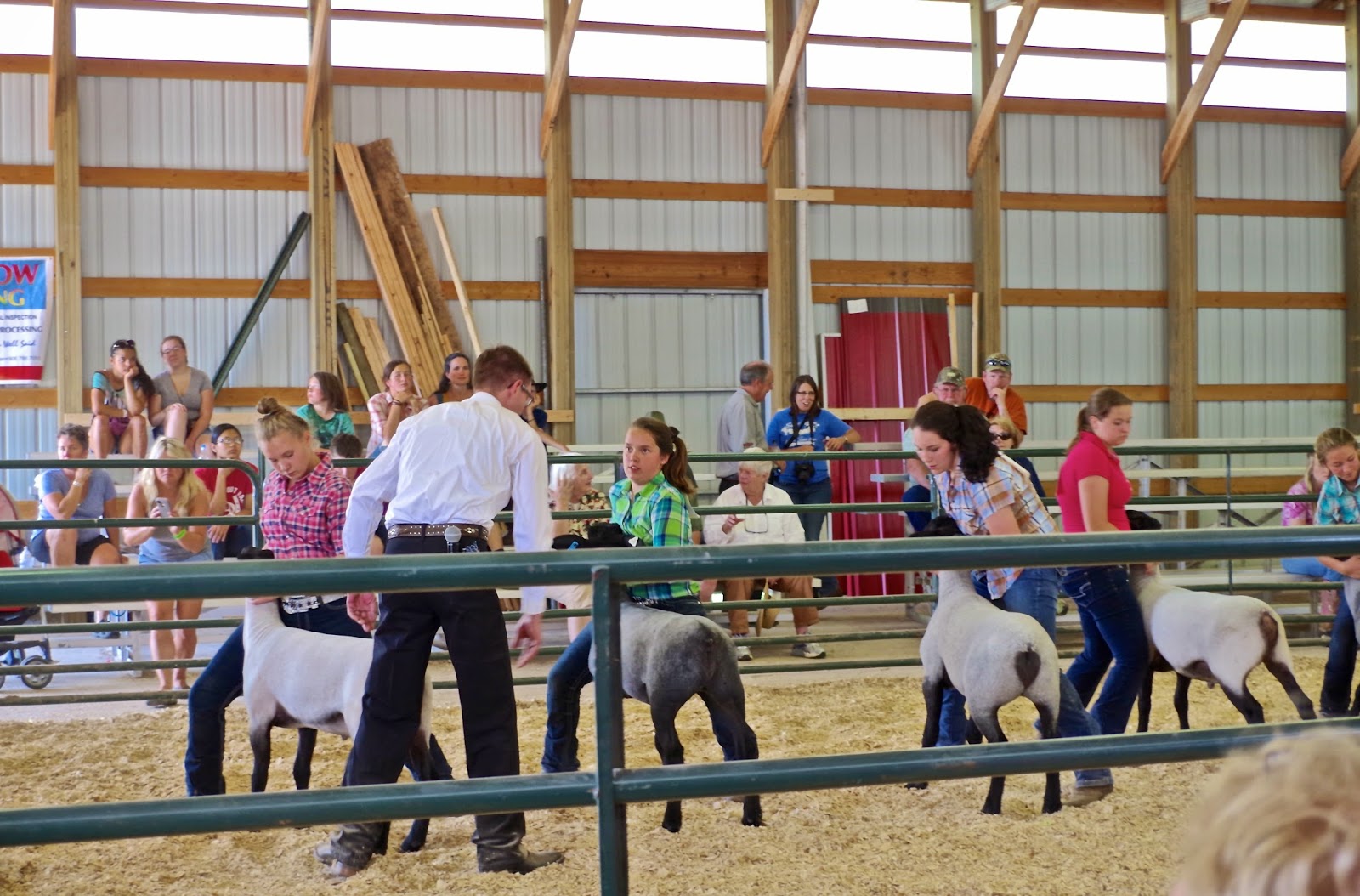 We went over to the Fun Zone, what there was of it, maybe a dozen rides, mostly for the little ones, a couple for the older ones and I only saw one game and a couple more food vendors, but I did spot one thing that our fair never had, and probable never will...Fresh Deep Fried Wisconsin Cheese Curds! Ha! 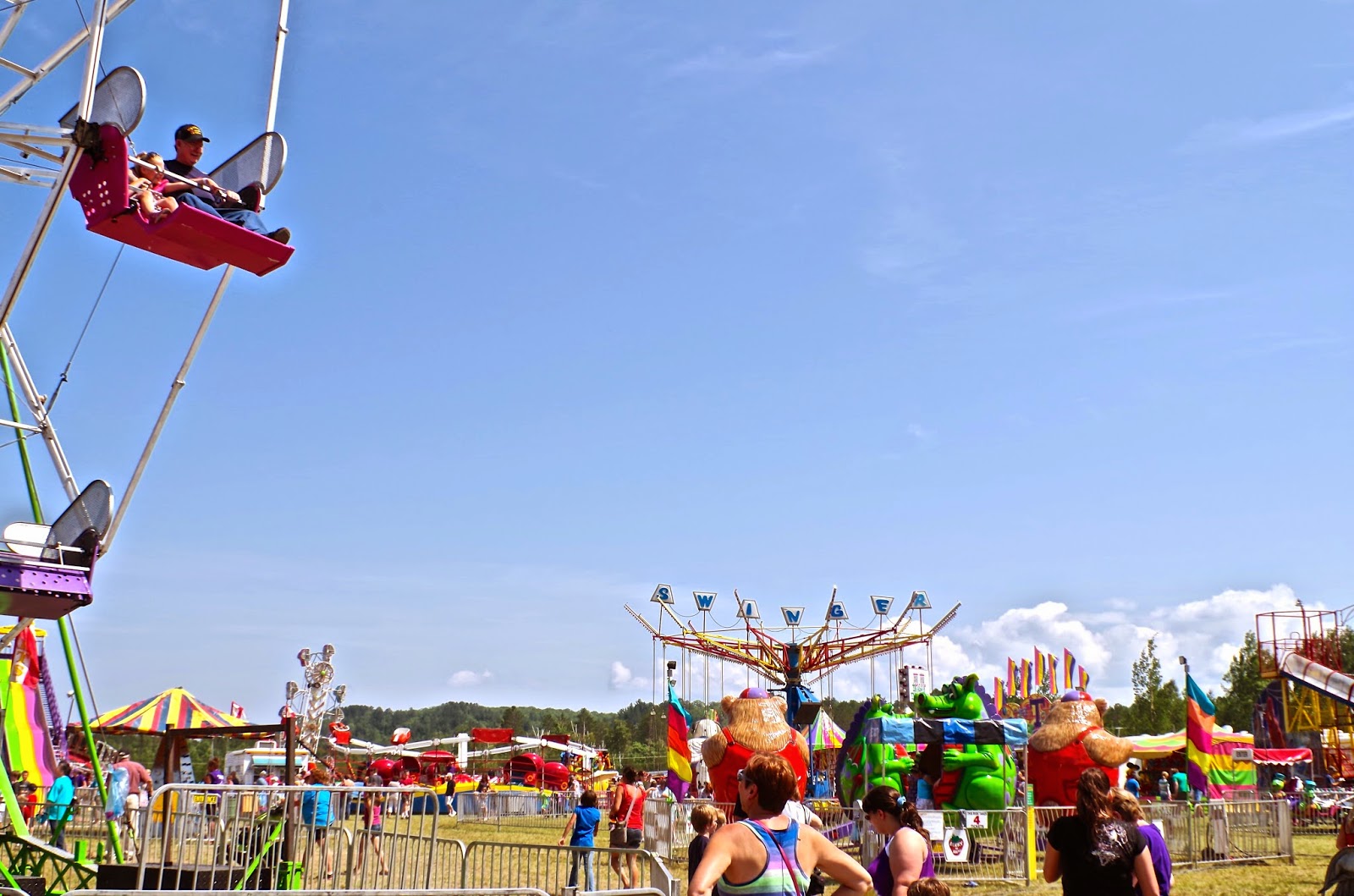 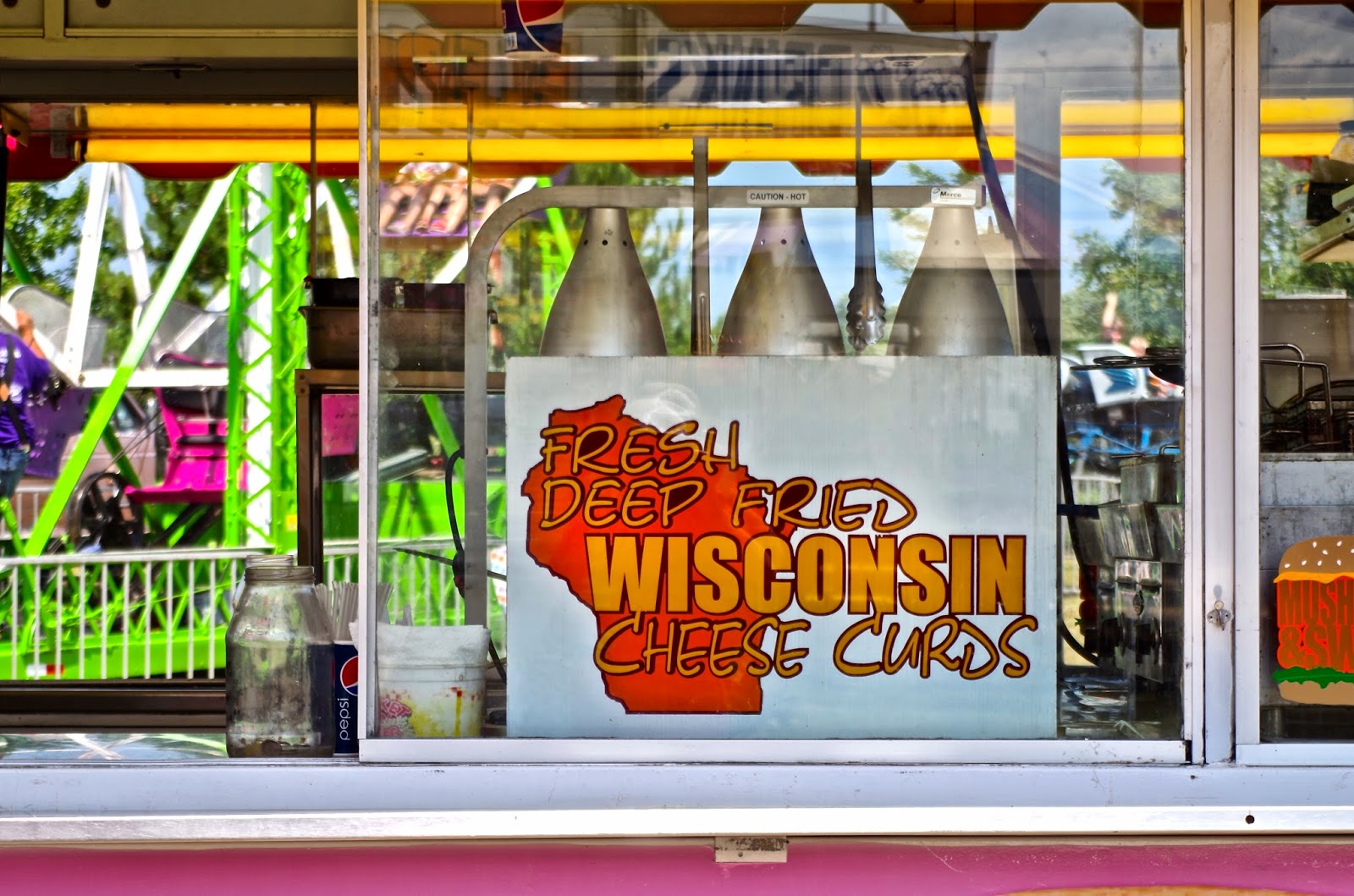