Once you "cross over the Mackinaw Bridge" you have entered the Upper Peninsula, or the "U P" as everyone refers to it here.  They even have names for people who live on one side or the other!  If you live below the bridge, you are called a "Troll", and if you live in the U P, you are called a "Yooper" (pronounced You-per), and they are both proud of it, and declare where they are from!  Oh, and don't forget the (few) from Mackinac Island (still pronounced Mackinaw, don't ask me...) they are called "Fudgies" - that one is because there are 17 different fudge stores on one (tiny) island!  There are a whole list of names and sayings here, "for sure", but, I'll spare you that for now... 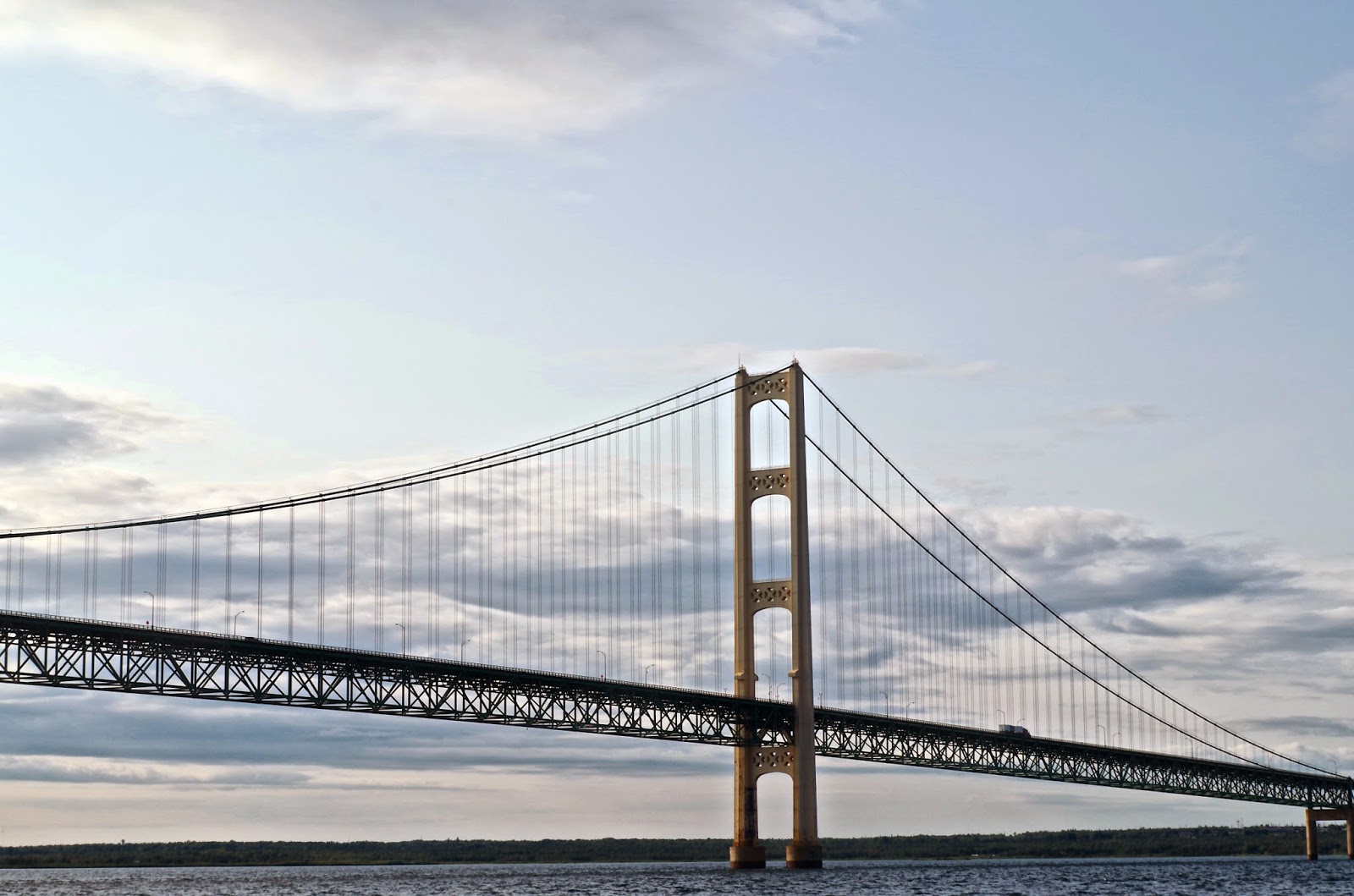 Anyway, as I was saying, we finally made it to the U P, the area I've most looked forward to - the home of Mackinac Island, Sault Ste Marie & Lake Superior!

Once settled, our first mission was to take the ferry over to Mackinac Island.  We caught a clear, sunny day out of a week of cold on & off rainy ones and took an early ferry over.  If you don't know, they have an interesting history there, in that back in 1948 the carriagemen continued the ban of autos (since 1869) on the note that they "startled the horses and caused harm to the people".  Thus, the only way around the 3.8 sq mile island is by carriage, foot, horse or bicycle!  They do allow snowmobiles in the winter tho (of course nothing public is open then, but hey, if your local, go for it!).  We opted for the carriage tour!  A great way to see the island, hear about the various spots and get on and off to visit at length at the Fort.


They give you a brief stop at Arch Rock where you can get out and take a couple of pictures, then hop back in to tour the State Park.  The State Park actually encompasses 80% of the island, and is lush and feels so far away from the little town.  It also houses the three cemeteries on the island, Protestant, Catholic and one for the Fort (they don't believe in co-mingling there).


Fort Mackinac is a restored 18th & 19th century British & American military outpost preserved as a museum.  All the buildings are original; their history is interpreted through period settings and you are greeted with period costumed folks and throughout the day, reenactments of cannon firings, musket firings, music & dance are done. It was quite nice.


From there we took a nice walk back into town and visited the Biddle House that was connected to the Benjamin Blacksmith Shop.  A young woman was at the forge (and doing quite well!).  Jack enjoyed conversing with her and seeing their set up, which was very impressive.  It was a large shop using original 19th & 20th century equipment, giving people nice demonstrations.


Time for lunch!  We decided to really treat ourselves and have "high tea" at the Grand Hotel.  This is the hotel where the 1980 film Somewhere in Time was filmed with Christopher Reeve.  Such a beautiful place, we couldn't resist!  You actually have to pay to even go into the hotel, but who cares, right?  They do it in style, a lovely lady playing the harp, butlers in tails, champagne, sherry, fancy canapes with a orchid on the plate, deserts to die for, ah, heaven!

Oh, and of course, the endless view of Lake Superior and the two lighthouses, what could be better?

All in all, a lovely day...well worth the wait!  We never did try any of the 17 different fudges...oh well, guess we will just have to come back again another year! 'Eh?