Movies & Music, what a great exit to Kansas!


While driving around Wichita, Jack and I noticed the Starlite Drive-In movie theater that still was in operation.  Hardly believing our eyes, we drove in and happen to run into the owner, who verified that yes, it opened at 7pm, showing three screens beginning a 8pm with two movies on two screens and three movies on one screen, each screen, $12 per car!  “Wow!”  We said, “We’d be back on Saturday night!”  What a hoot!  We started reminiscing, trying to remember the last time either one of us had been to a drive-in.  It certainly hadn’t been together…and for me, it hadn’t been since my own kids were little!  For Jack, probably the same amount of years…so, we were talking about almost 30 years ago maybe?  Now that's nostalgia!   We decided we would “do it up right” - pick up some food & snacks, wear comfy cloths, bring pillows, the whole nine yards…and he had to promise to kiss me at least one time during the movie!  I could hardly wait until Saturday night!

Saturday came, Jack cleaned the truck windows and we loaded up.  We chose the first screen.  It came with the three movies, but there was no way we would make it all the way…we are way to old for that!  Luckily the one we were interested in was the first movie, so that was the important thing.  The “new thing” is you can use the speaker (so glad they kept those!) and/or you can turn your radio to a certain channel and get the sound.  The speaker only had “on or off”, no other volume control, so I could see the reason for the radio - we just kept the speaker outside (it was a hot night, and that seemed to work just fine.  Others around us had trucks as well, and “came prepared” - they backed in and piled bean bags, blankets and pillows all around and got real comfy!   Once the snack bar commercials started we had to really laugh, because after all these years…those hadn’t changed!  About the only thing different that we could see was the addition of “Chilly Willy” which is a pickle.  I think it’s a regional thing here, because I see pickles advertised in a lot of quickie stops around the mid-west. 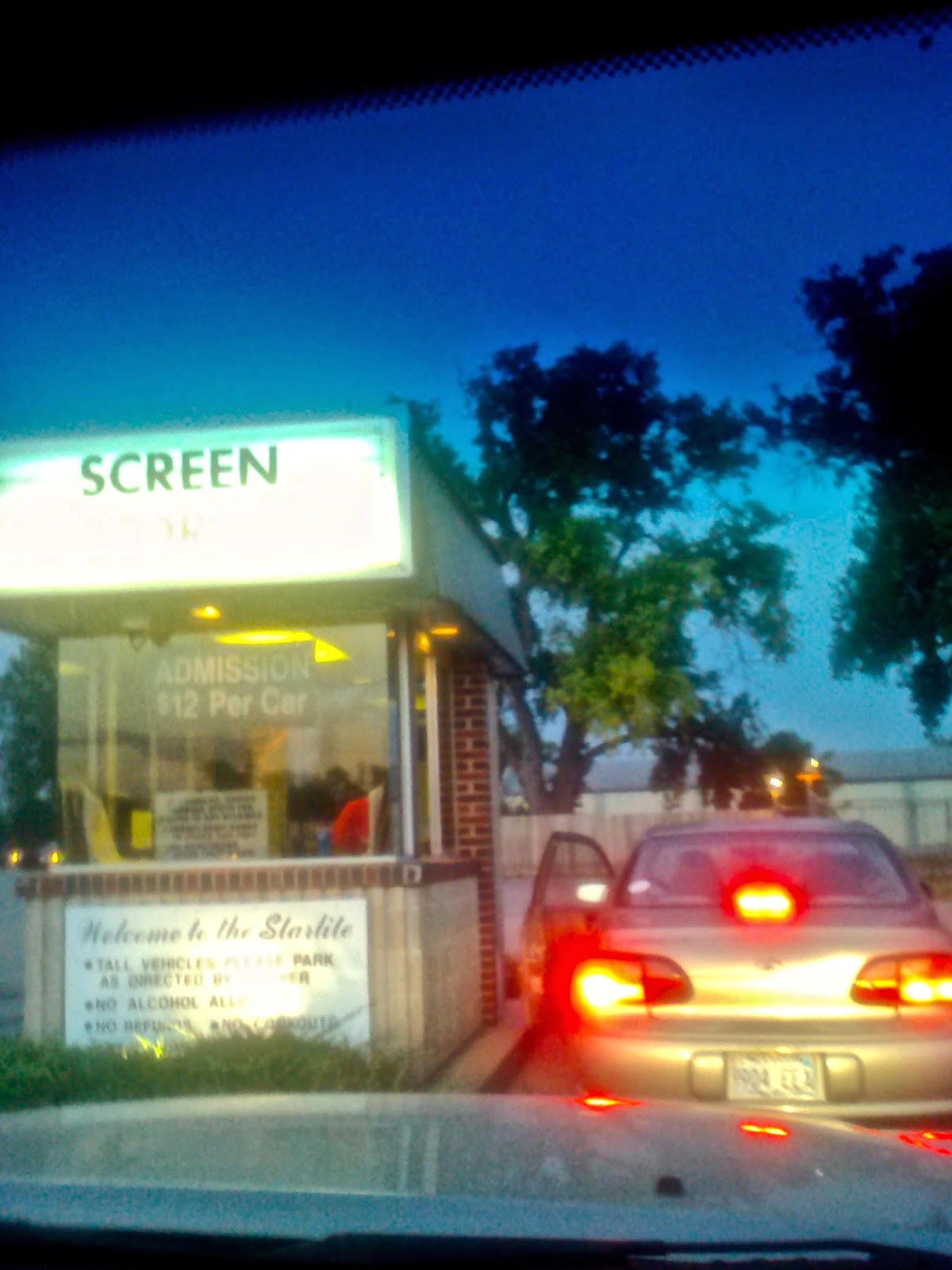 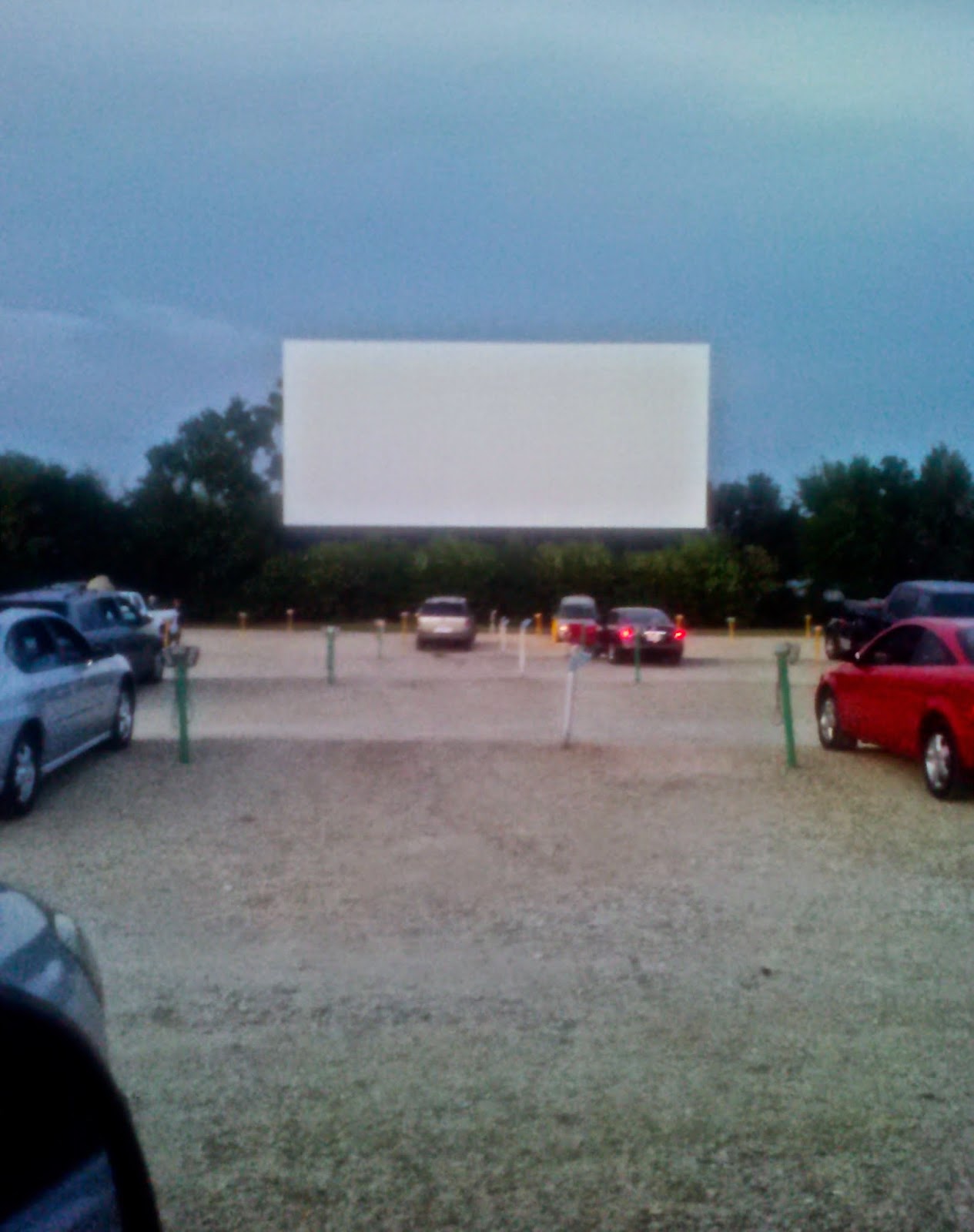 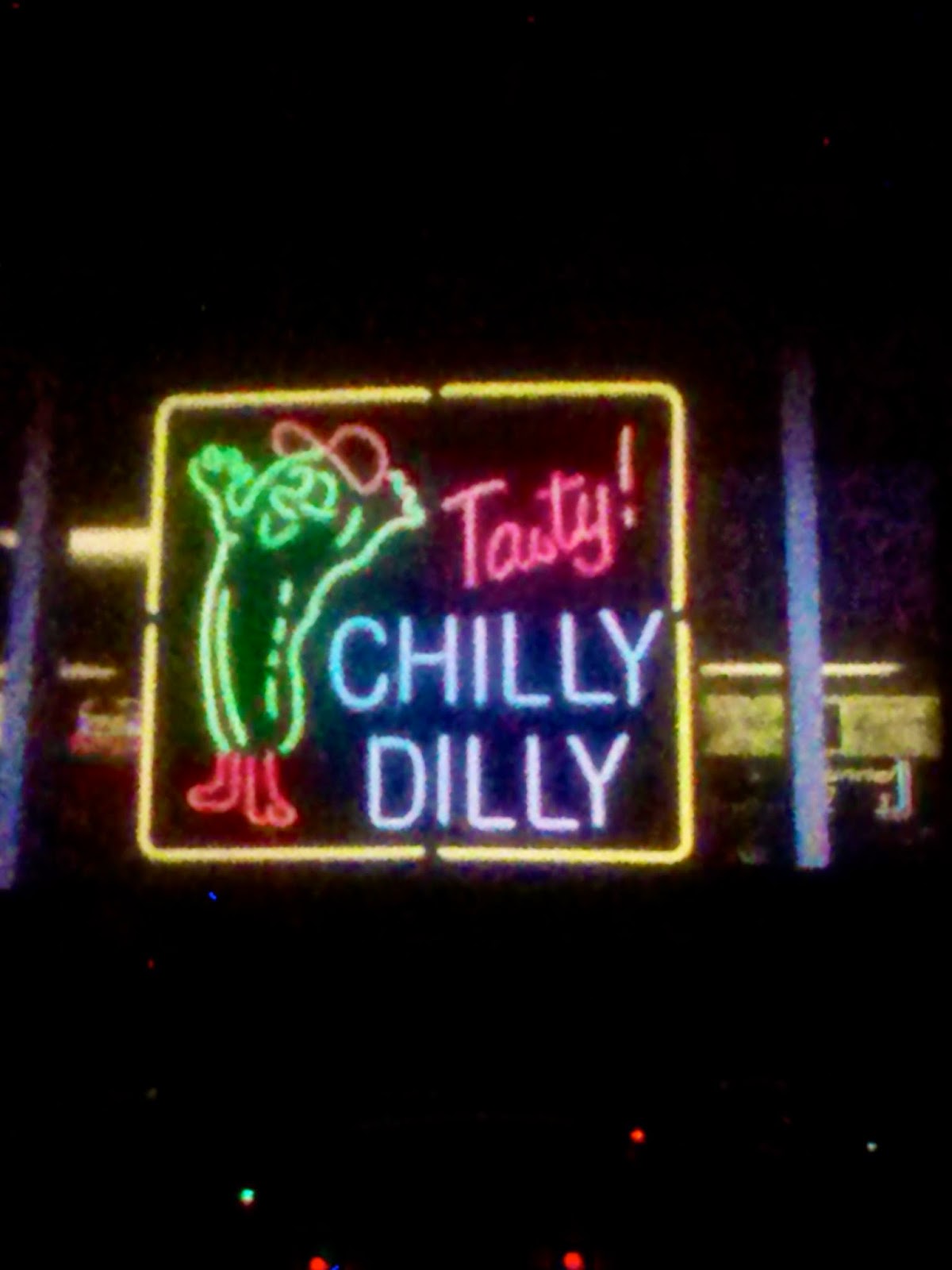 A few sprinkles showed up, which brought some of the outsiders into their trucks for a little while, but then it cleared right back up again, so not a big deal.  The first movie was good.  The second got really weird, and by the second half it had reached midnight and we’d had enough, so called it a night.  I got my kiss, it was a great evening!

We had to stick around Wichita extra days to have some work done on our awning, and since we were going to be there over the weekend anyway, I told Jack that I heard that there was a Bluegrass Festival going on nearby we should attend.  We had to depend on the service guys each day to let us know when they were going to do the work on the awning, so we never quite knew what our day was going to be like.  We had hoped to go to the festival on Saturday, but that turned out to be the day they ended up doing the work - smack dab in the middle of the day, so no use making the drive over to Winfield.  We chose Sunday, which was the last day.

Walnut Valley Festival in Winfield Kansas is evidently a very BIG deal, especially for “National Flat-Picking Championships”.  We missed the guitar competition on Saturday, but was able to see the banjo competition on Sunday, and was so glad we did!  What a delight it was too!  Wow!   20 superb players in all.  After that we were able to catch a couple of fun Bluegrass acts, one called the Boxcars that were especially good.  It was equally entertaining to walk through the vendor areas as they were filled with all the various instruments, straps, picks, jewelry, music, etc that musicians and people in this field or followers would be interested in, plus the usual assortment of western wear and “stuff”.

We’re told that almost more music is played in the adjoining campgrounds as that at the festival.  It sure would be a fun adventure to plan on attending some year! 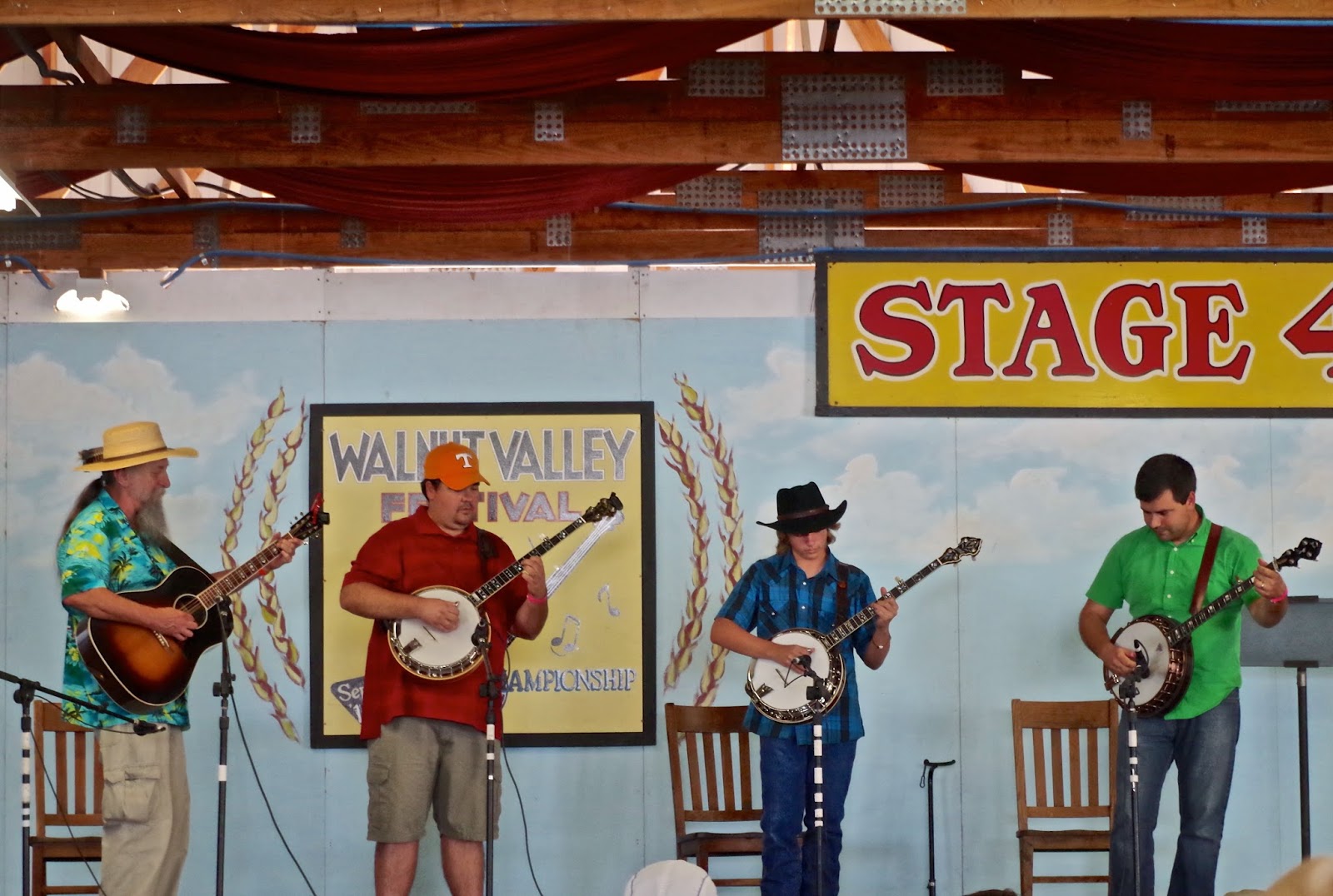 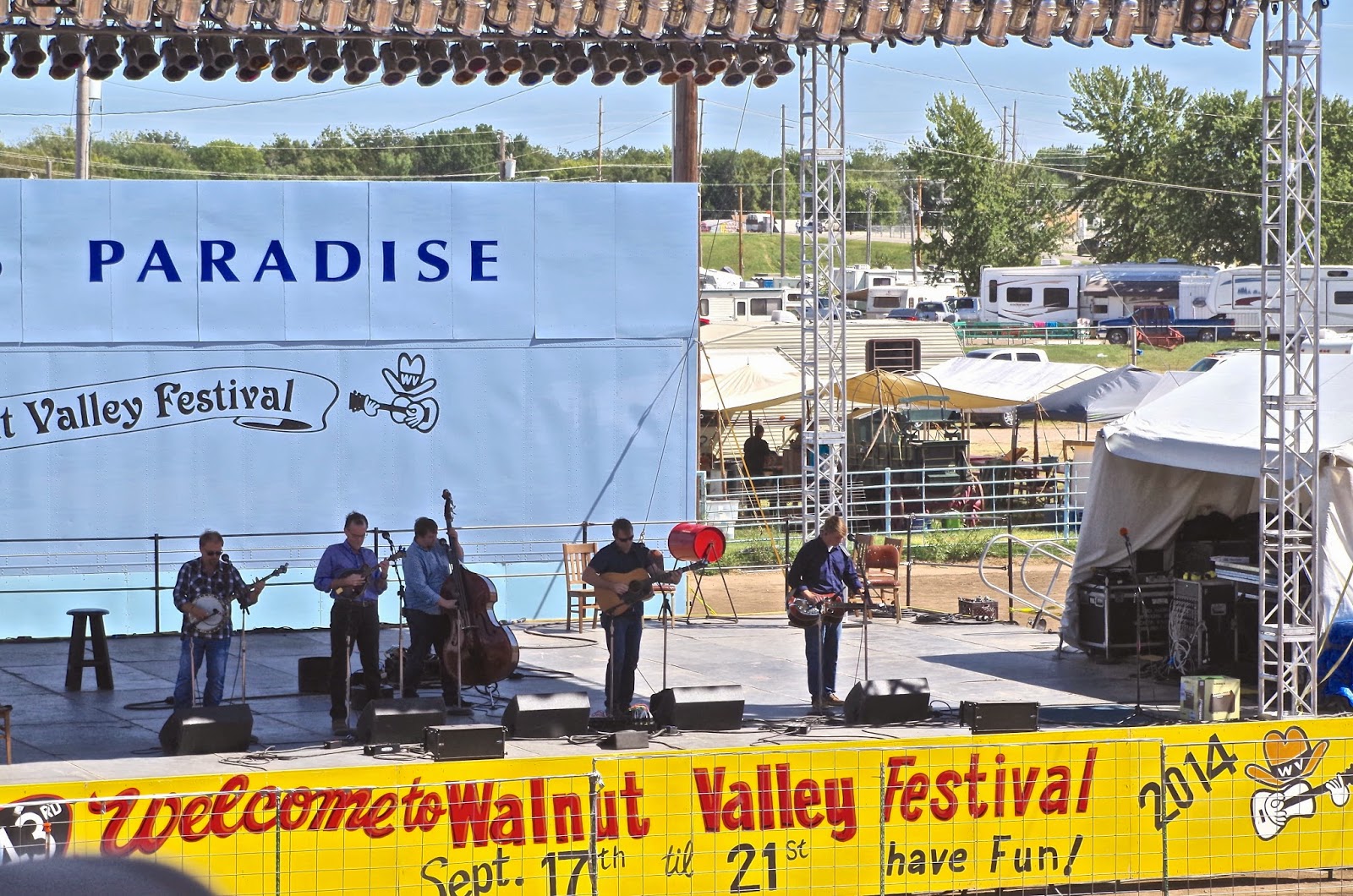 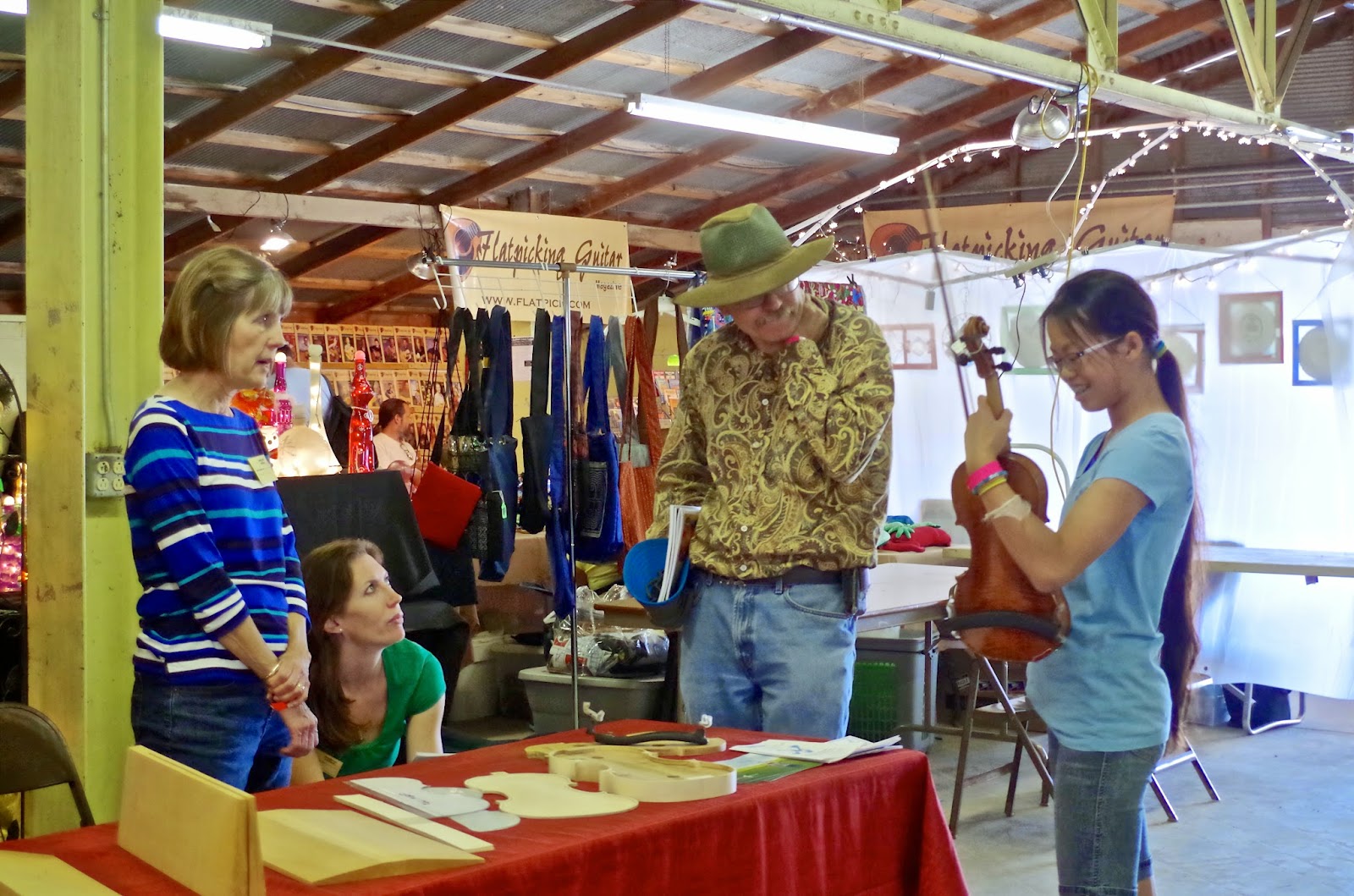 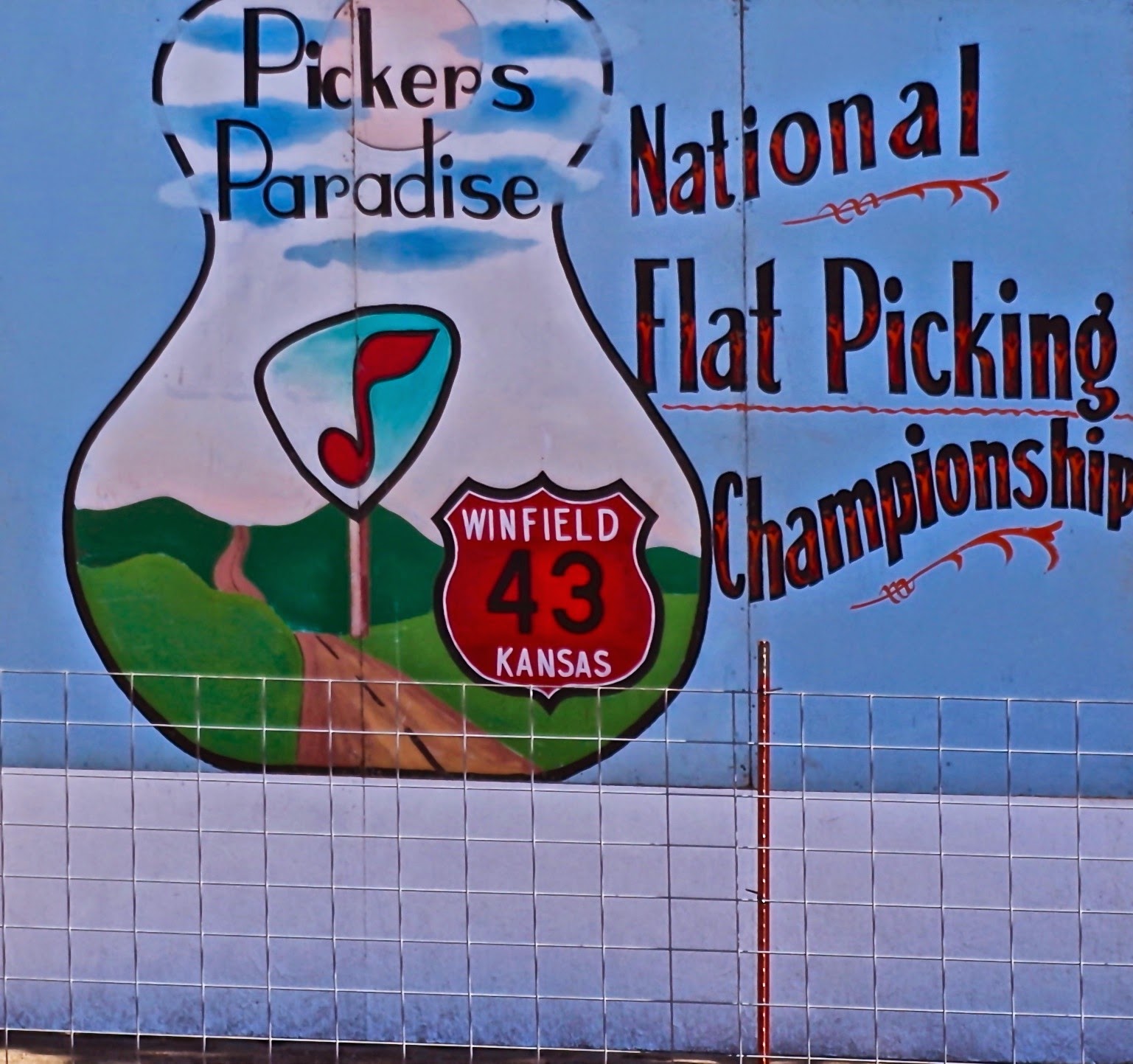 Wichita itself wasn’t a big draw for us, and we only stayed as long as we did because of the work that we were having done, but because of that work delay, it afforded us the opportunity to experience a couple of things we wouldn’t normally have been able to do…so for that, thank you  Wichita, we had fun!

...on the road to Oklahoma, Marie