With so much to still see and do in Oklahoma City, we started out early.  Our first stop of the day was to the National Cowboy & Western Heritage Museum.  Both Jack and I like western heritage, so we were really looking forward to this particular museum.  In our travels, we have been to quite a few throughout the various states, but I have to say, this is one of the very best!  I'm sure that the fact that Oklahoma City's heritage is uniquely western, starting out with the Land Run of 1889 has a lot to do with it.  This museum does an outstanding job of showcasing it with more that 28,000 Western and American Indian art works and artifacts.

Beyond that, I loved how they had different, fun galleries - Native American: representing American Indian life in western North America;  American Rodeo: a lifelike 1950s era rodeo arena that showcased rodeo history, including champions, clothing and various memorabilia;  Western Performers: a really fun gallery that was a tribute to the shaping of the movie cowboy, including Western stars such as John Wayne;  and Prosperity Junction: a replica frontier town complete with the sights and sounds of the settlement at dusk.

It took us all morning to visit this place, it was so fascinating!  We ended up staying and having lunch in their on site restaurant, that was also a delight.  Jack got to talking to one of the guards while we were there that makes knives as a hobby (and sells some in the gift shop).  They enjoyed sharing stories about blacksmithing techniques etc.

Once fortified, we headed over to the Oklahoma History Center for some more insight into this interesting state.  They too took great pride in the stars and people in the film industry that have come from Oklahoma, such as Joan Crawford & Brad Pitt (who still comes to visit his grandmother here), and movies that have been filmed here, like "Grapes of Wrath" and "Twister".  But one of the most unusual things inside the museum, I thought, was The Century Chest.  It was a chest that had been sealed into the basement of The First English Lutheran Church back on April 22, 1913, then opened a century later by that same church.  Inside were documents, a quilt, photos, newspapers, paintings, clothing, recordings, books, poetry, and messages from individuals and organizations in 1913 to the people of 2013.  The project had been embraced by the entire state as citizens, tribes, businesses, community organizations and legislators all participated.  All was on display and very cool.  So many times we see things go into one of these chests, but this is the first time I've ever seen anything that has come out of one! 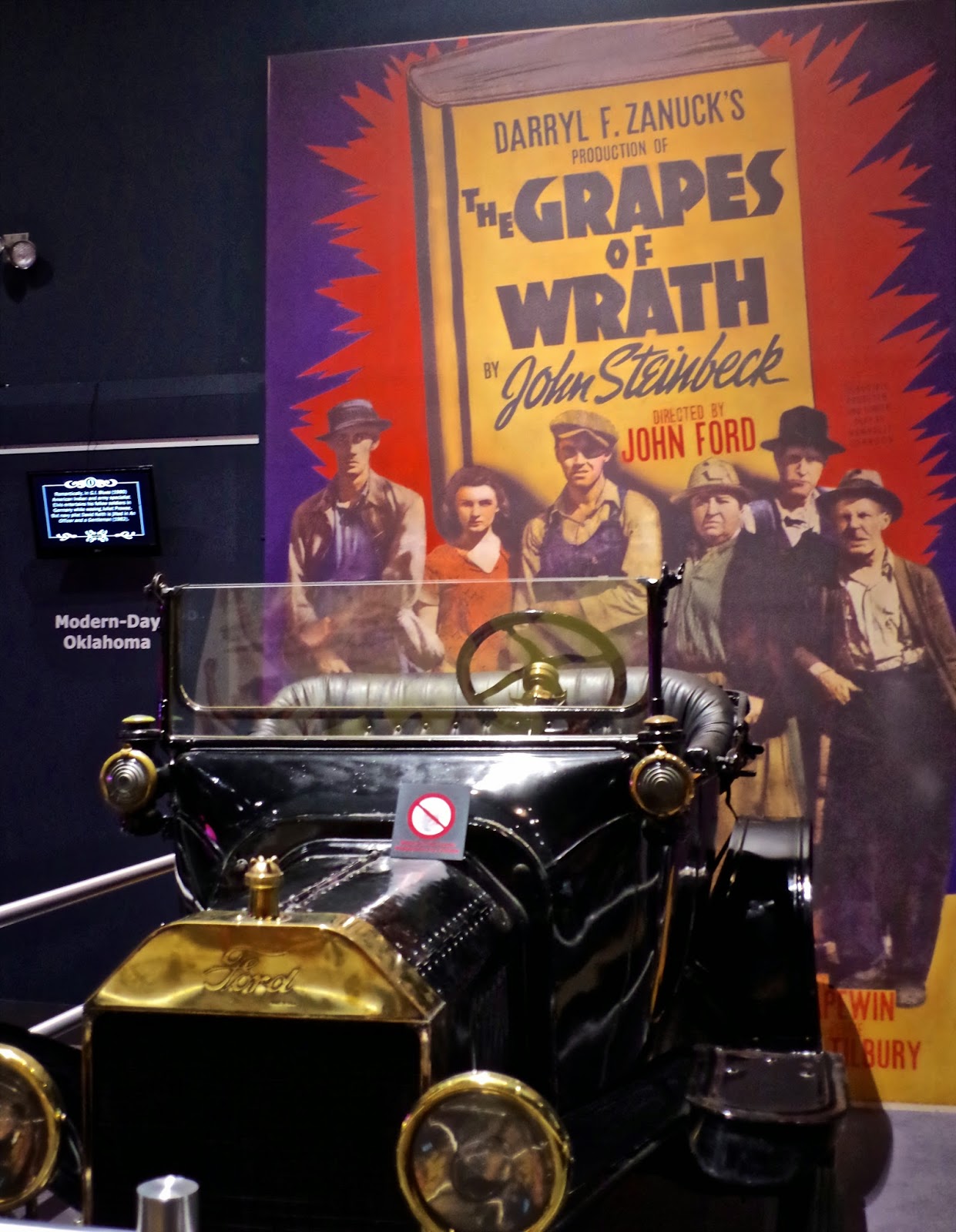 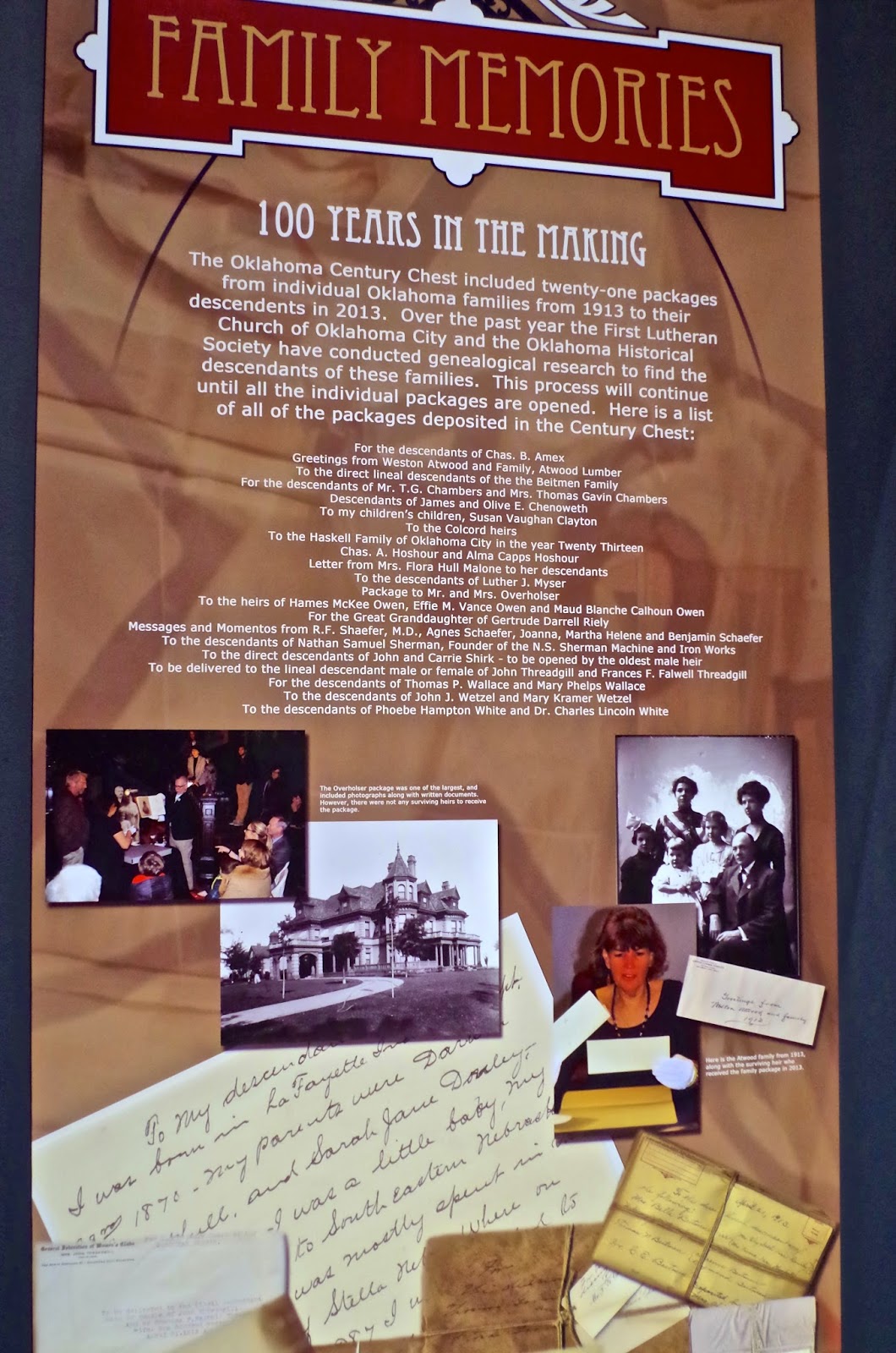 Outside was another cool display, it was Devon Oil & Gas Exploration Park, of all the really early oil rigs and various equipment. 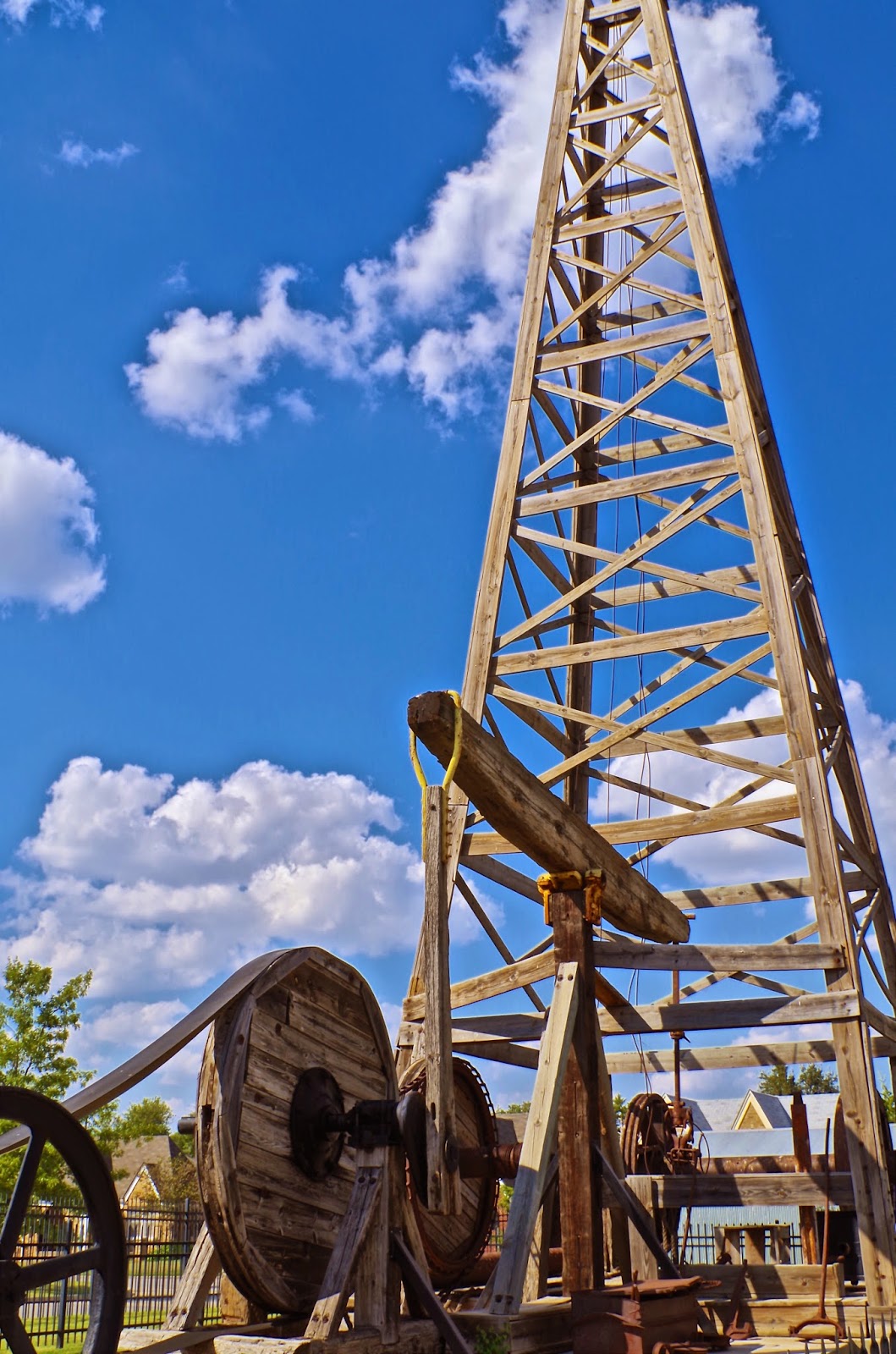 We ended the day with a last stop at the beautiful Centennial Land Run Monument.  What a magnificent multi-piece sculpture.  Bigger than life, but so realistic you feel caught up in it, part of it.  The energy is incredible, hard to describe.  It's placed among Prairie Grass, as it would have been then, in a park along a creek, that takes up at least a block.  Truly something to spend time at. 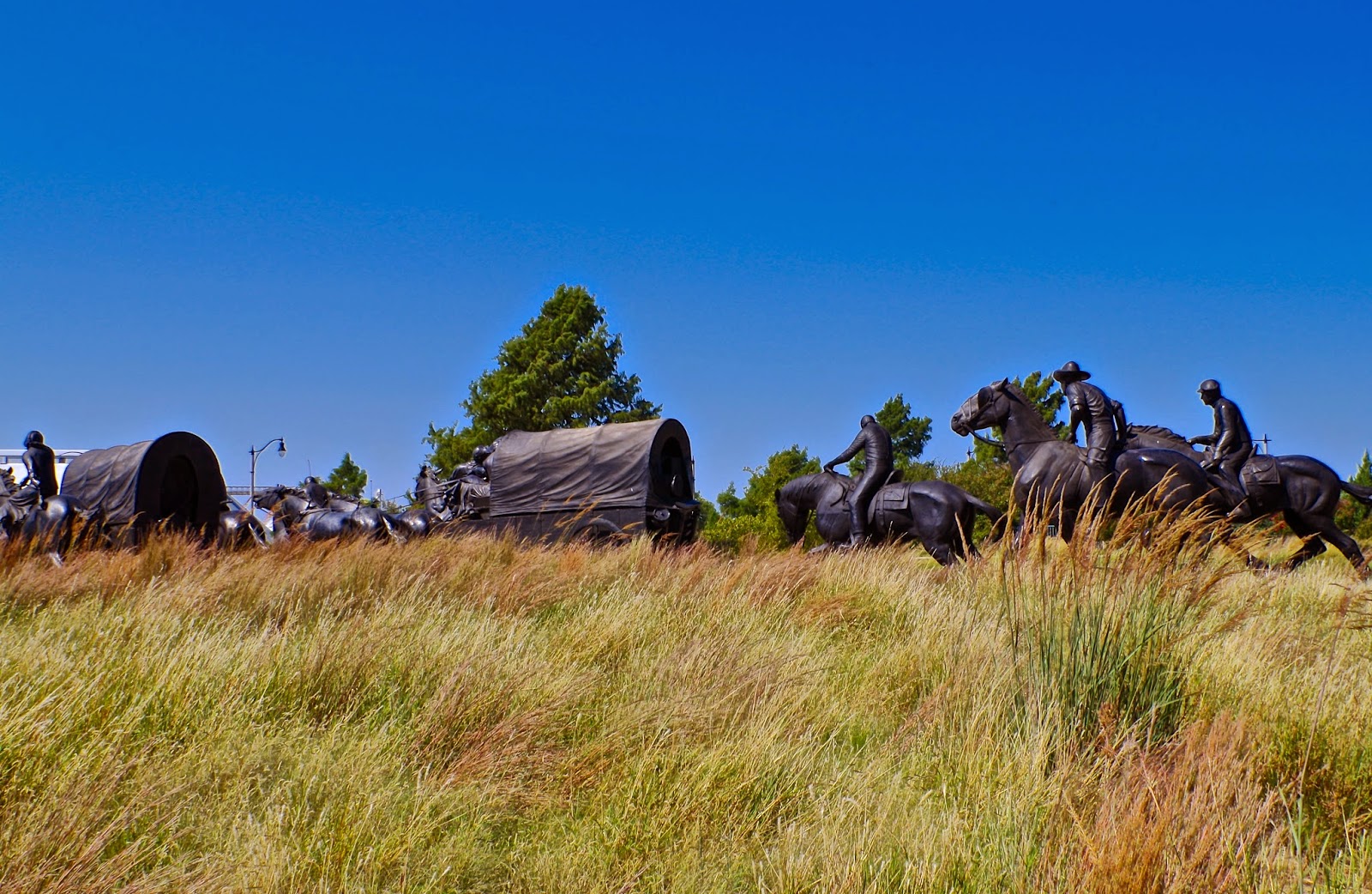 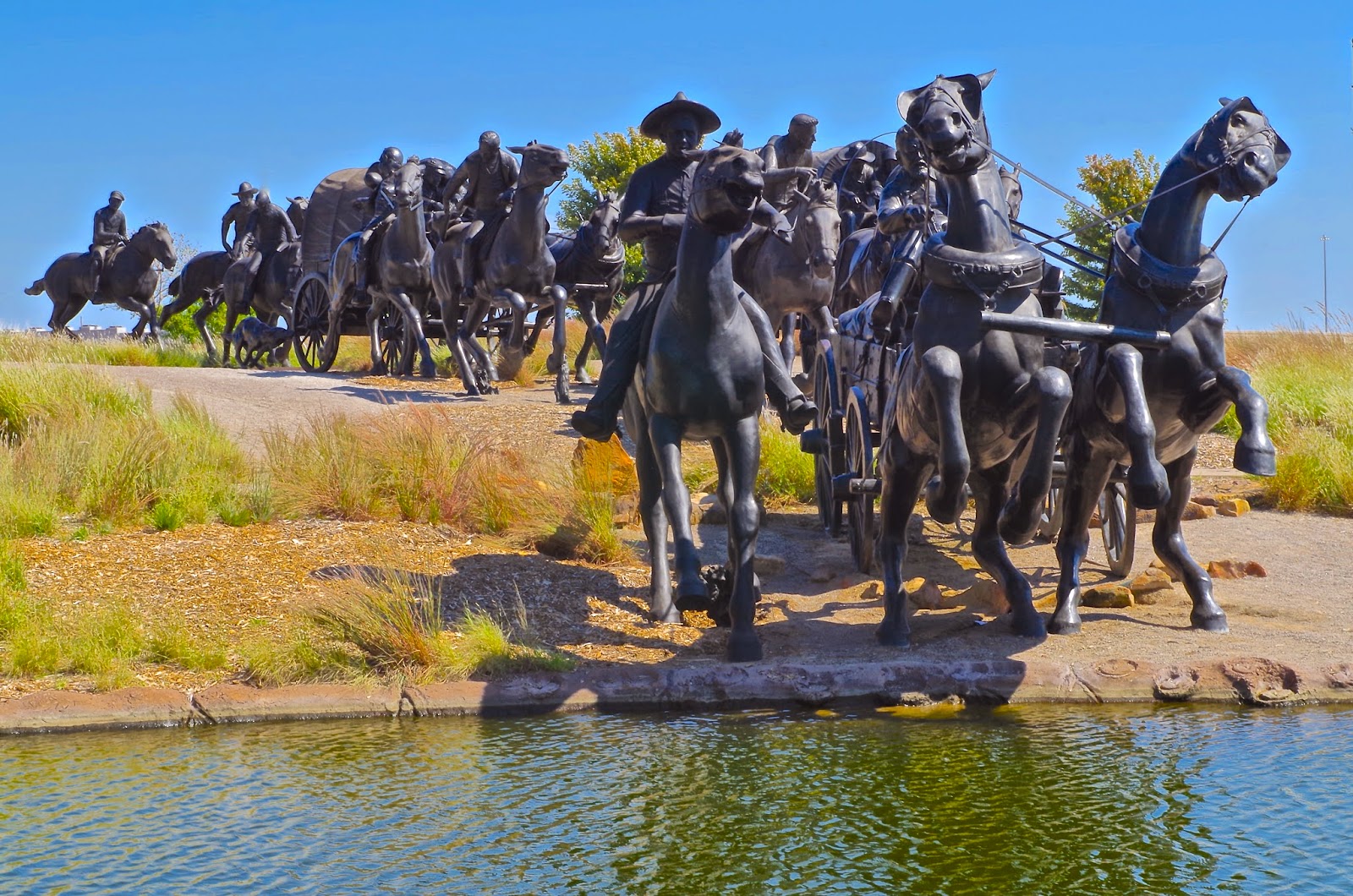 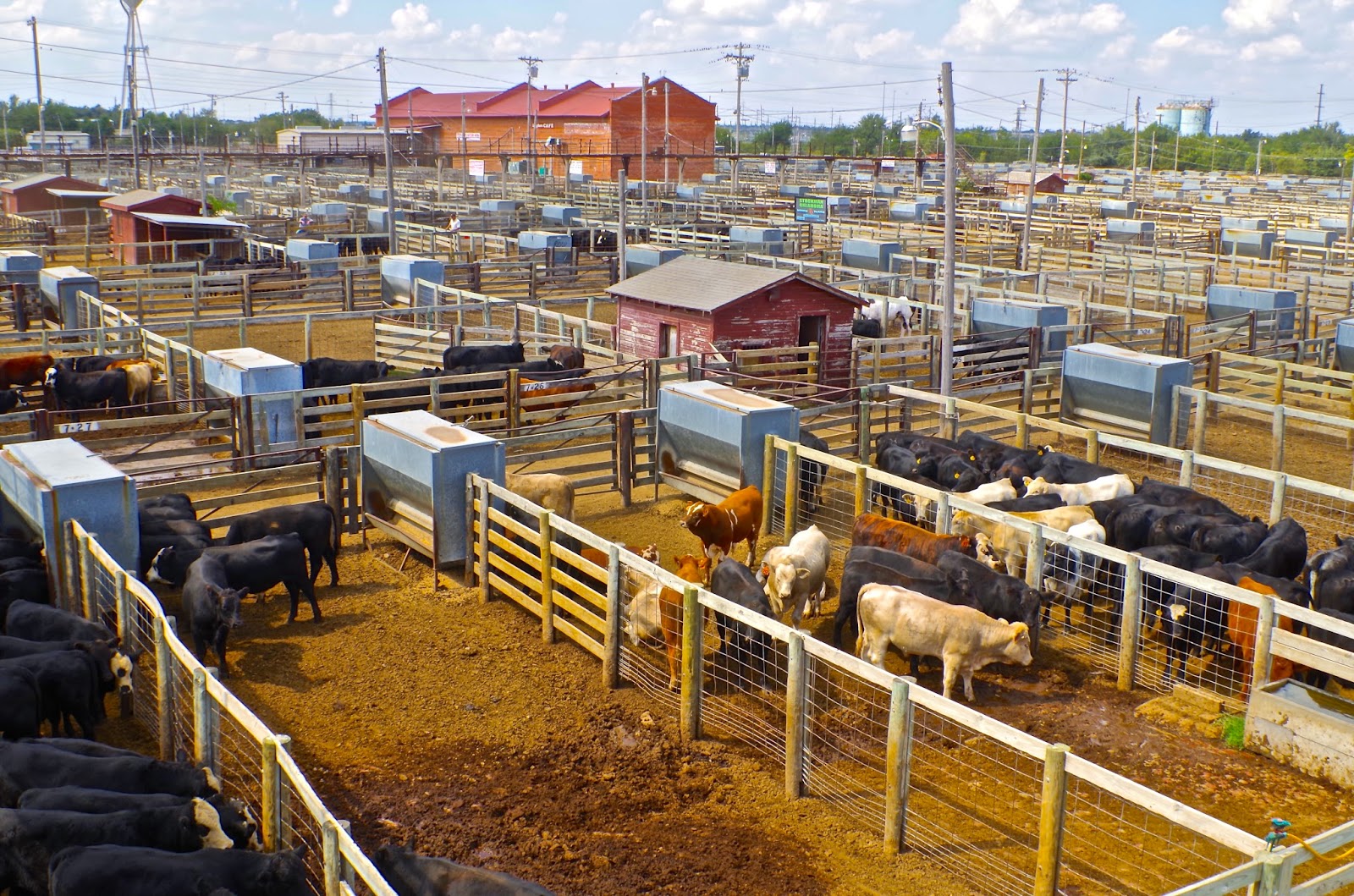 We saved Monday for the famous Cattle Auctions in Stockyards City!  I had heard about it for years and really wanted to check it out.  After all, how many places are left that have real stockyards where you can see, hear & smell thousands of cattle being herded into pens, then brought into auction?  Here, and Texas, as far as I know.  So, off we went!  Jack was a little dubious at first, but like the willing husband that he is, he went along with me.  Camera in hand, I was ready and anxious!  We barely got out of the truck before I was grinning from ear to ear, I could hardly wait to get up on the catwalk to see them!  What fun!  After about 10 min. up there, we got to talk to one of the cowboys working below who answered some of our questions for us (a really nice guy who was equally curious about us) and he explained that this time of year they tend to have a lot less cattle (about 6,000, back in the 70's it would have been around 11,000). 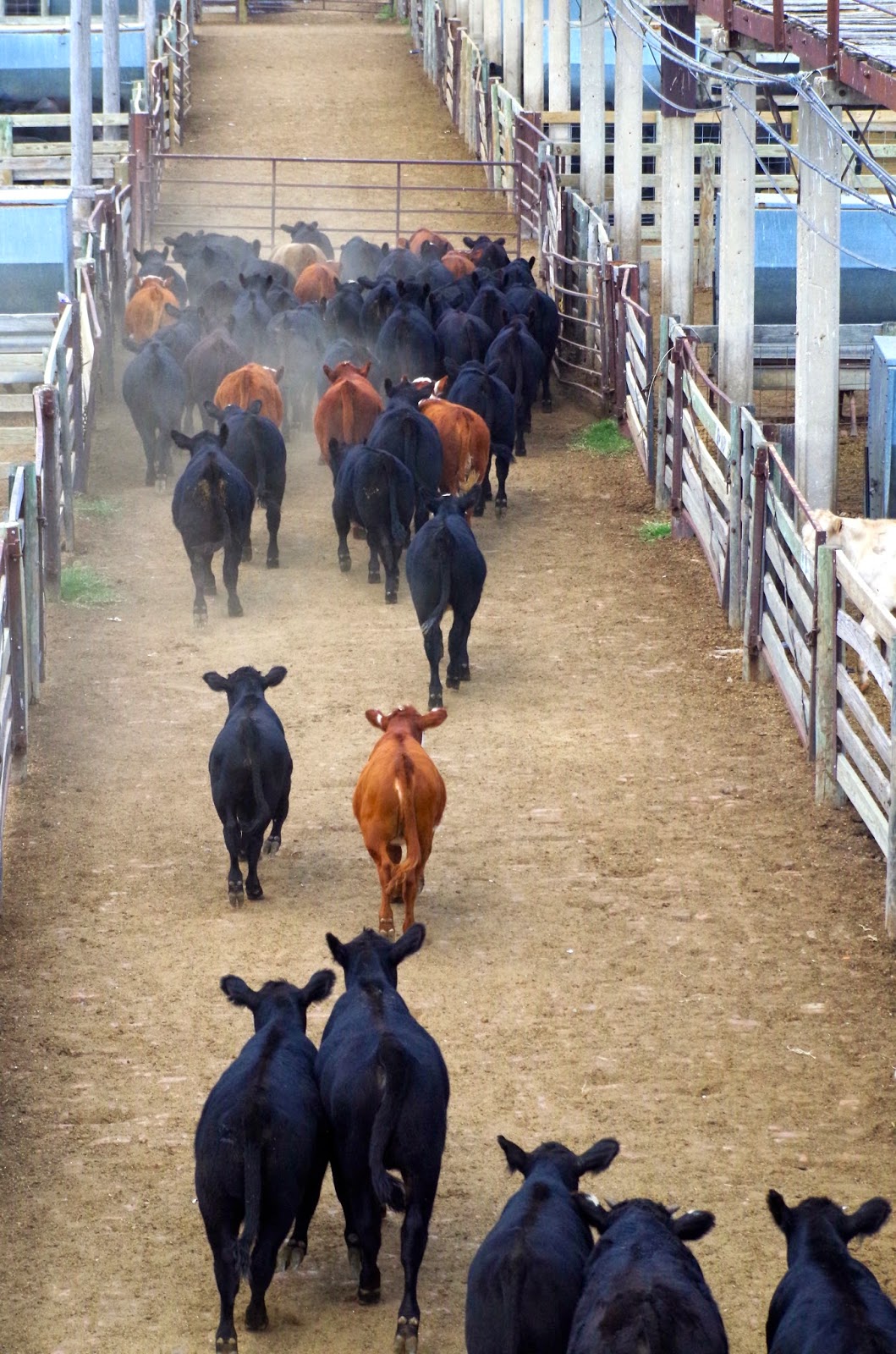 After shooting outside for awhile, we went inside to catch some of the auction.  There were about 25-35 or so men in a theater style room with an auctioneer and his two assistants in a front booth with TV monitors overhead giving the audience the stats.  The individual cattle brokers would come in and stand in a front pen and present the information about the cattle that were being herded through for the auctioneer, then the auctioneer would do his thing and the customers would wave a finger or nod or what ever subtle thing they had a habit of doing, and away they would go, on to the next group!  You could tell the auctioneer knew his customers, and their ways of bidding...I had fun trying to figure out who was doing the bidding and who wasn't half the time!  Fun! 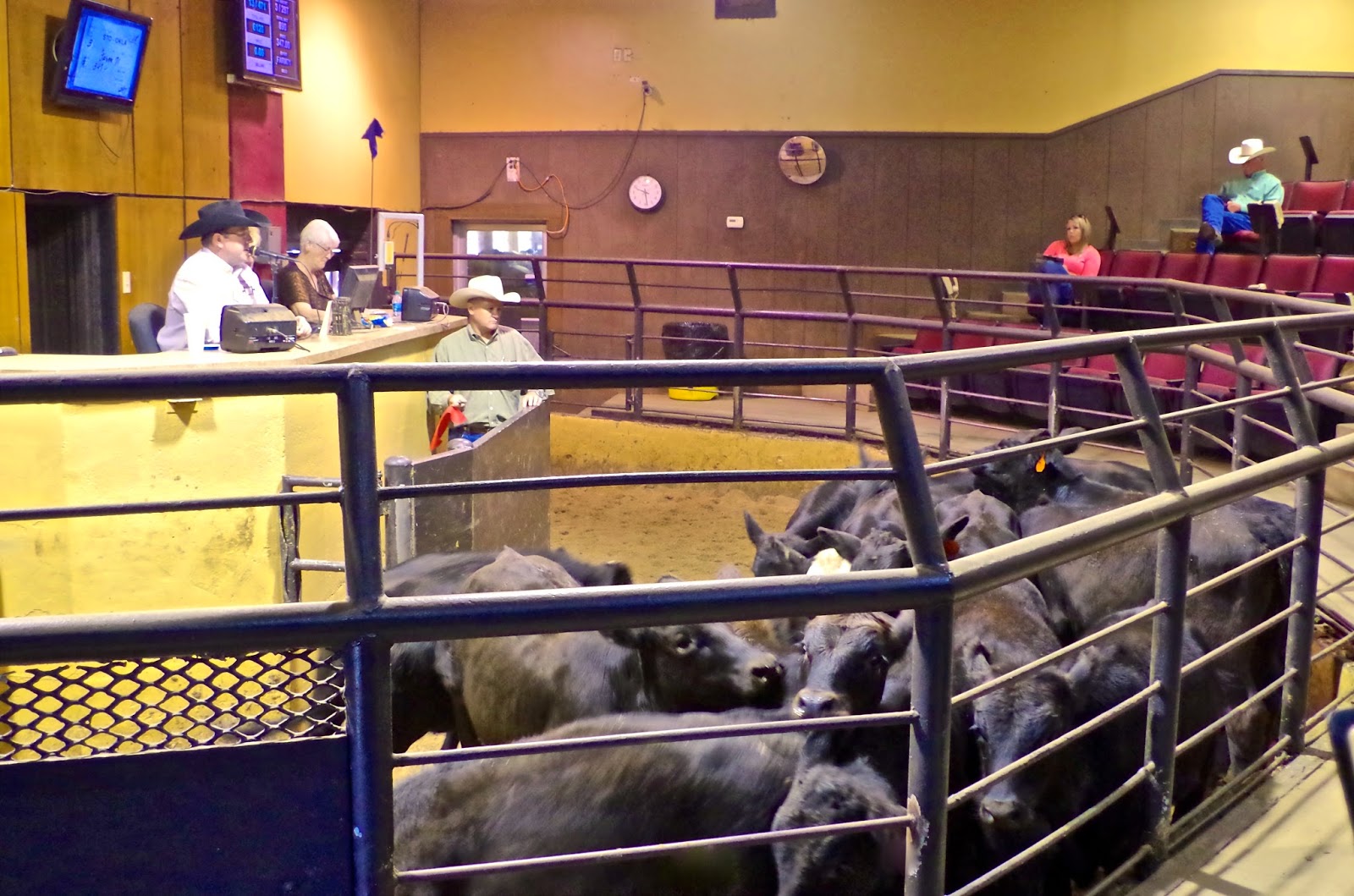 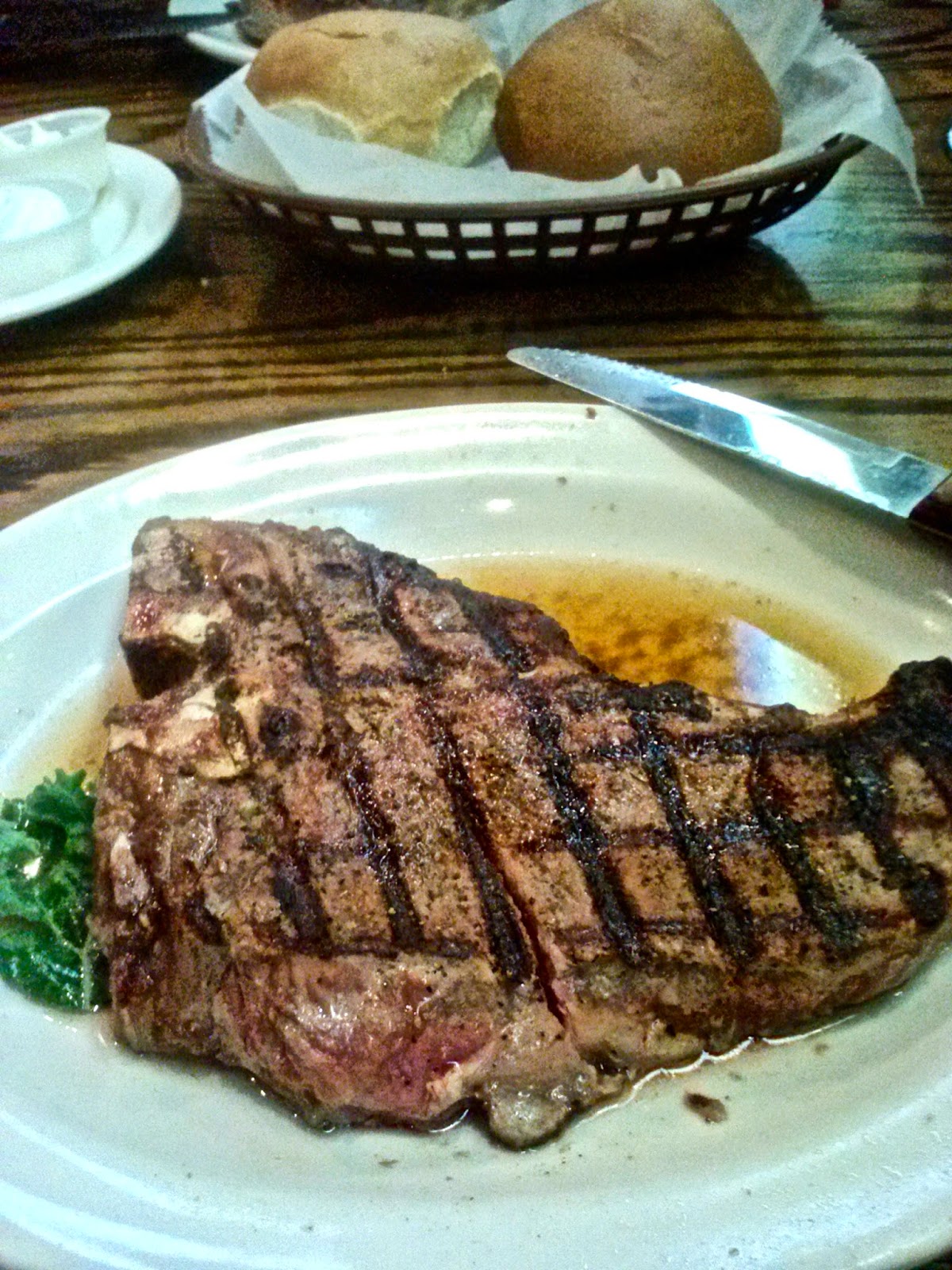 Later that night we came back to the famous Cattlemen's Steakhouse for dinner.  I had to try their signature steak, the 20oz T Bone!  Of course I took half of it home, but boy was it great, and what a wonderful way to end our stay in this terrific city!