It's not all fun and sunshine!

Life on the road isn't always "fun and sunshine" even though it appears like it is from my blogs.  Like life itself, it has it's ups and downs.  Lucky for us, it's mostly ups...but when the downs do come, yuck, they aren't fun!

Take this last week for instance...It started out just fine.  We headed out of Florida, heading towards Dallas to see my son and his family for a couple of days before heading to San Diego/north county for a month (Jack anyway...me, that's another story).  We had to make it quick because we needed to be in San Diego by end of the first week of March at least.  That gave us about two full weeks - no problem!  Plenty of time to stop in Dallas for a couple of days and stop in Glendale AZ to visit friends there as well.  Easy peasy...

One of the "codes of the roads" RVers live by, is the weather.  You check it daily, sometimes, several times a day, if you have to, depending on the time of the year.  As we traveled west the weather started getting worse and worse.  Each day the Dallas area's weather report got worse, so by day three of the trip, it wasn't looking good, and we knew we were going to have to turn and forgo Dallas and head toward Houston.  Dallas was snowing.  We don't do snow, ice or hail.  I was heartbroken.  I was going to miss seeing my grandson crawl for the first time...something I had been looking forward to for months.  They sent me a video.  Next best thing...I guess.

On to San Antonio we headed.  Colder and colder it got, but "ok" so far, so off to Ft Stockton the next day.  Oh my, that's when it hit!  Snow & ice, yikes!  Not fun.  By the time we pulled into the RV Campground, our windshield was three quarters covered in ice, and of course the wipers were only partially working.  Thank goodness Ft. Stockton RV Campground has a great little cafe attached that serves nice hot, homemade meals - which half the camp was there taking advantage of!  When we pulled in, 3 more RVs were right behind us, in the same condition we were in.  As we sat in the cafe that evening, we all shared how much fun (not) the drive had been and how (most of us) were headed west as fast as we could! 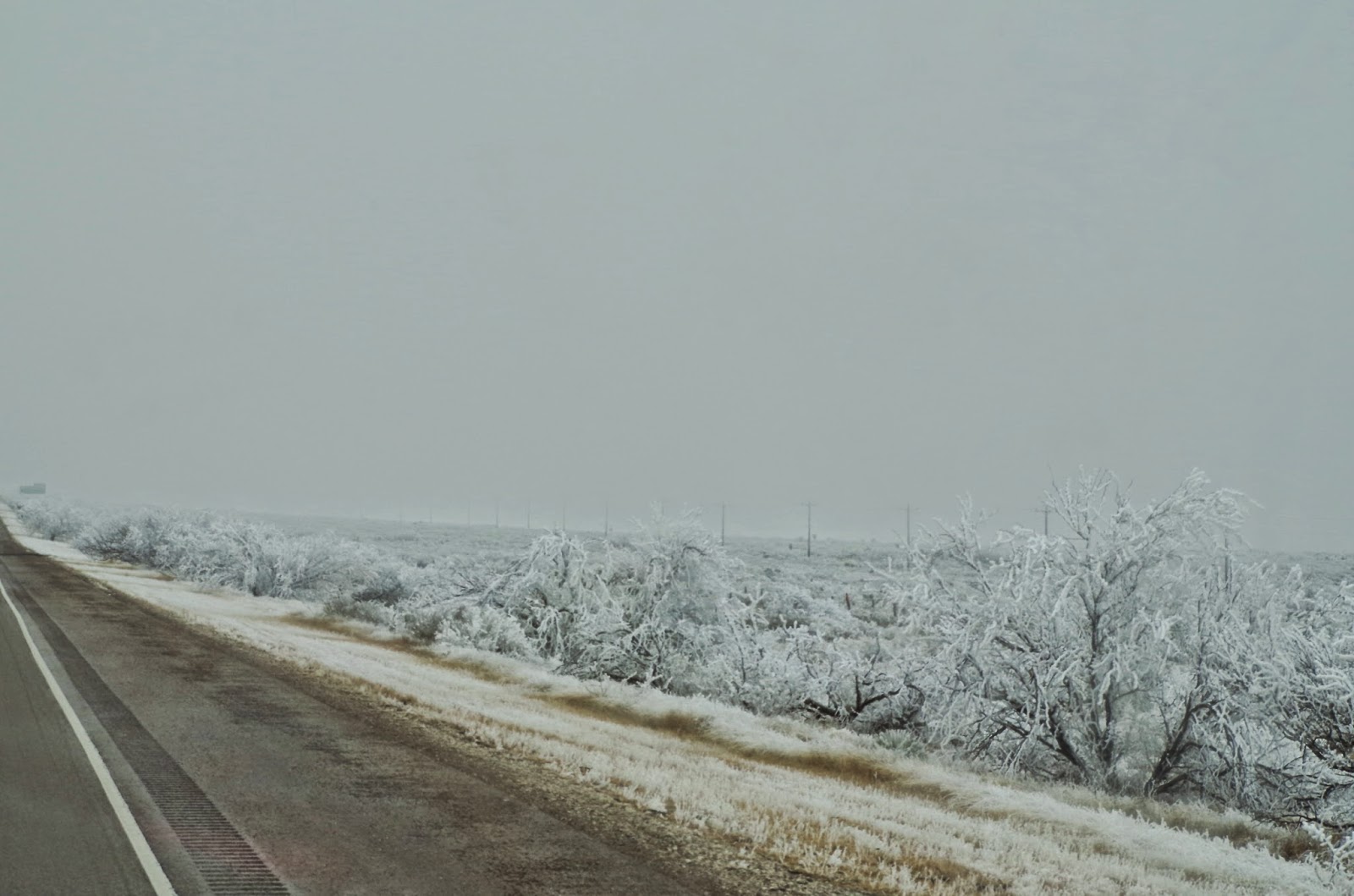 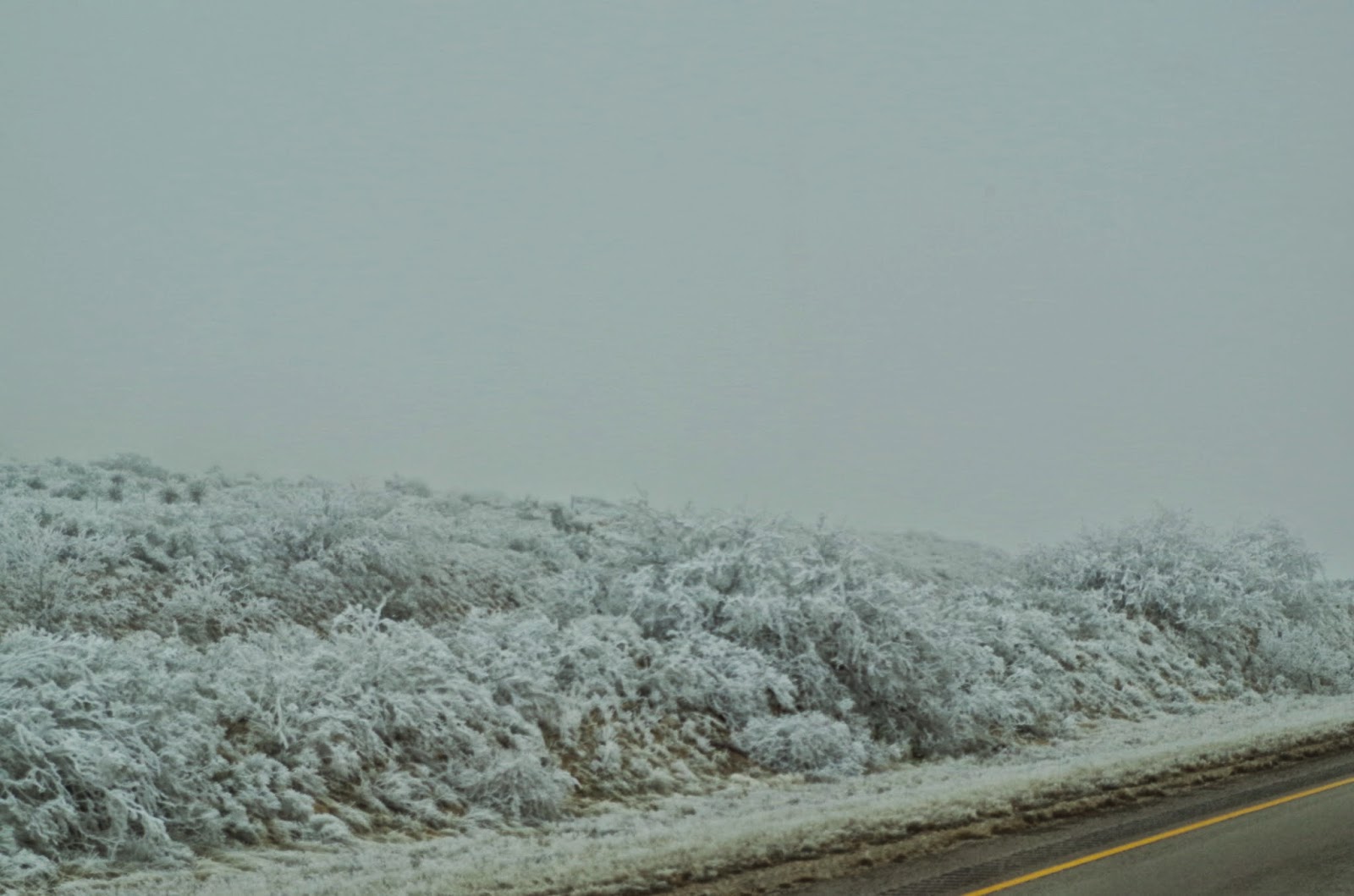 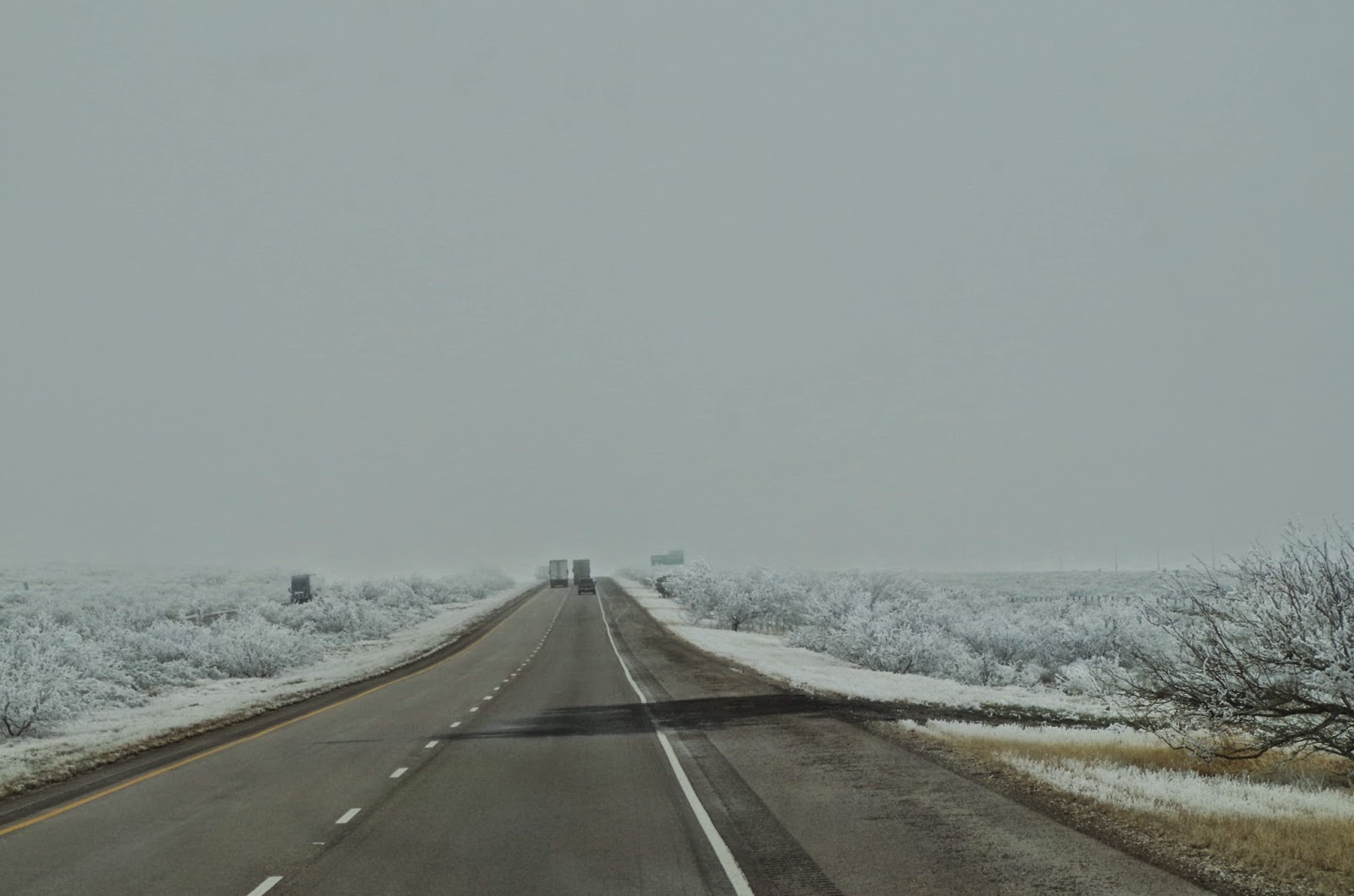 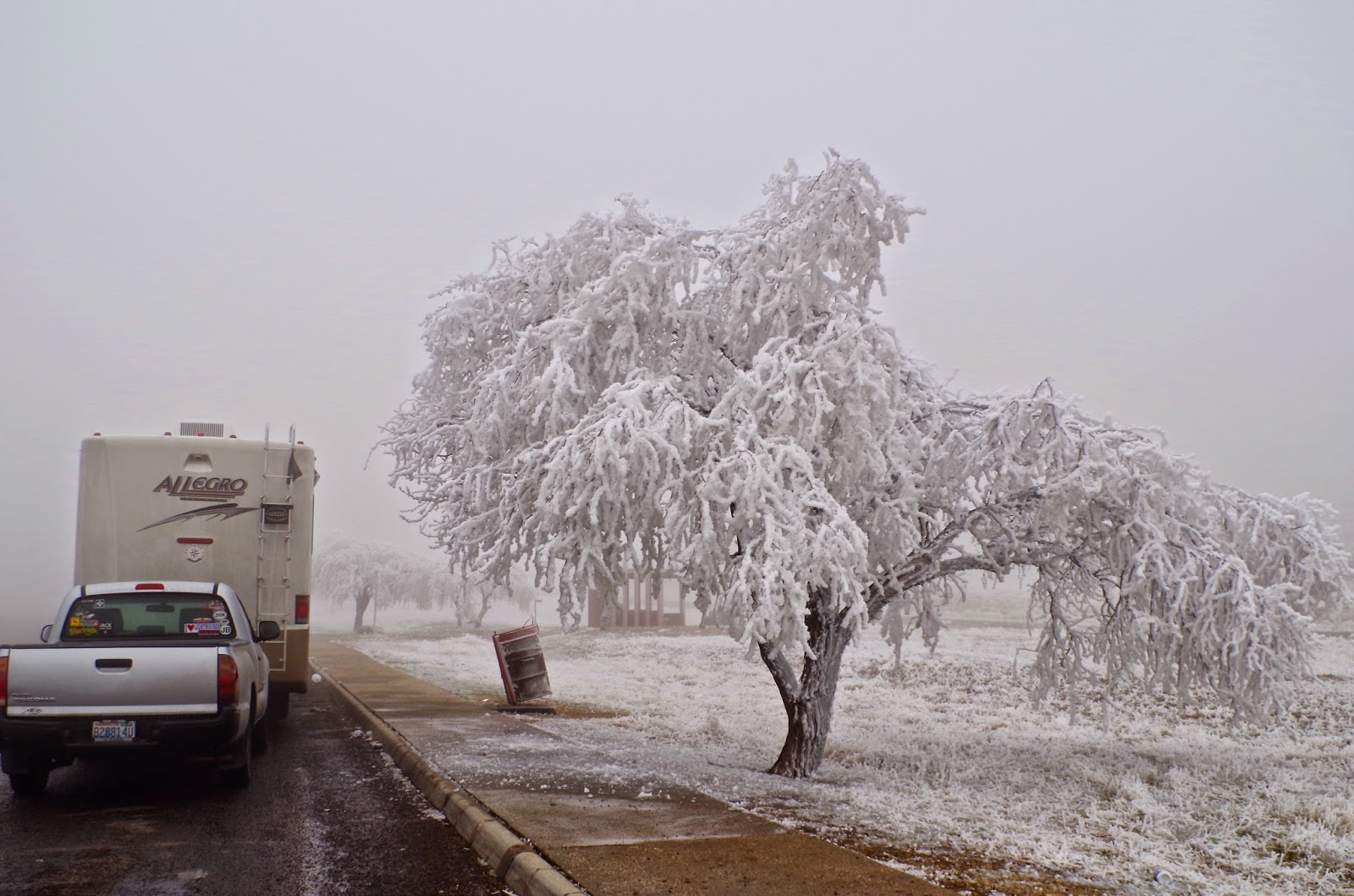 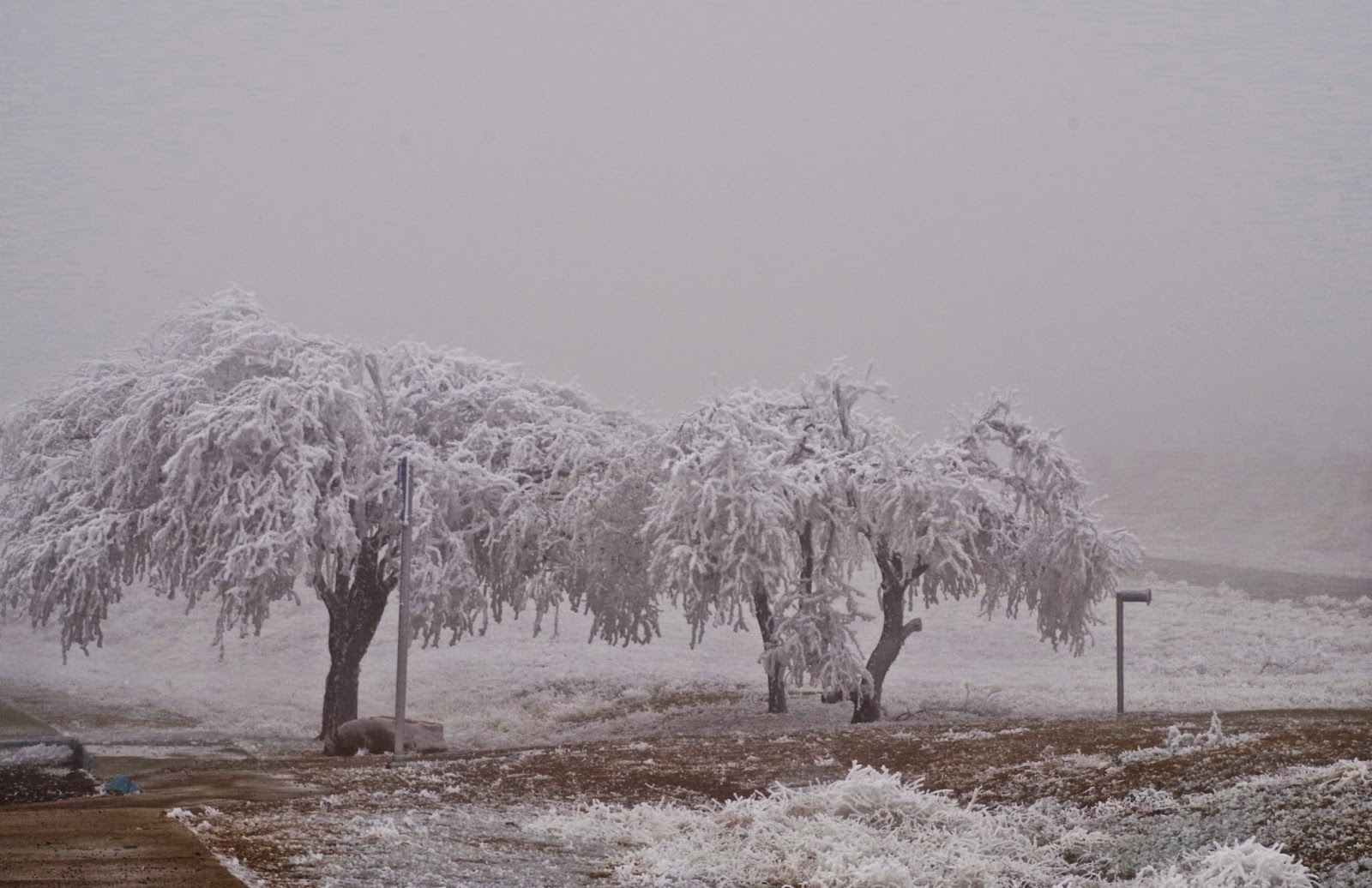 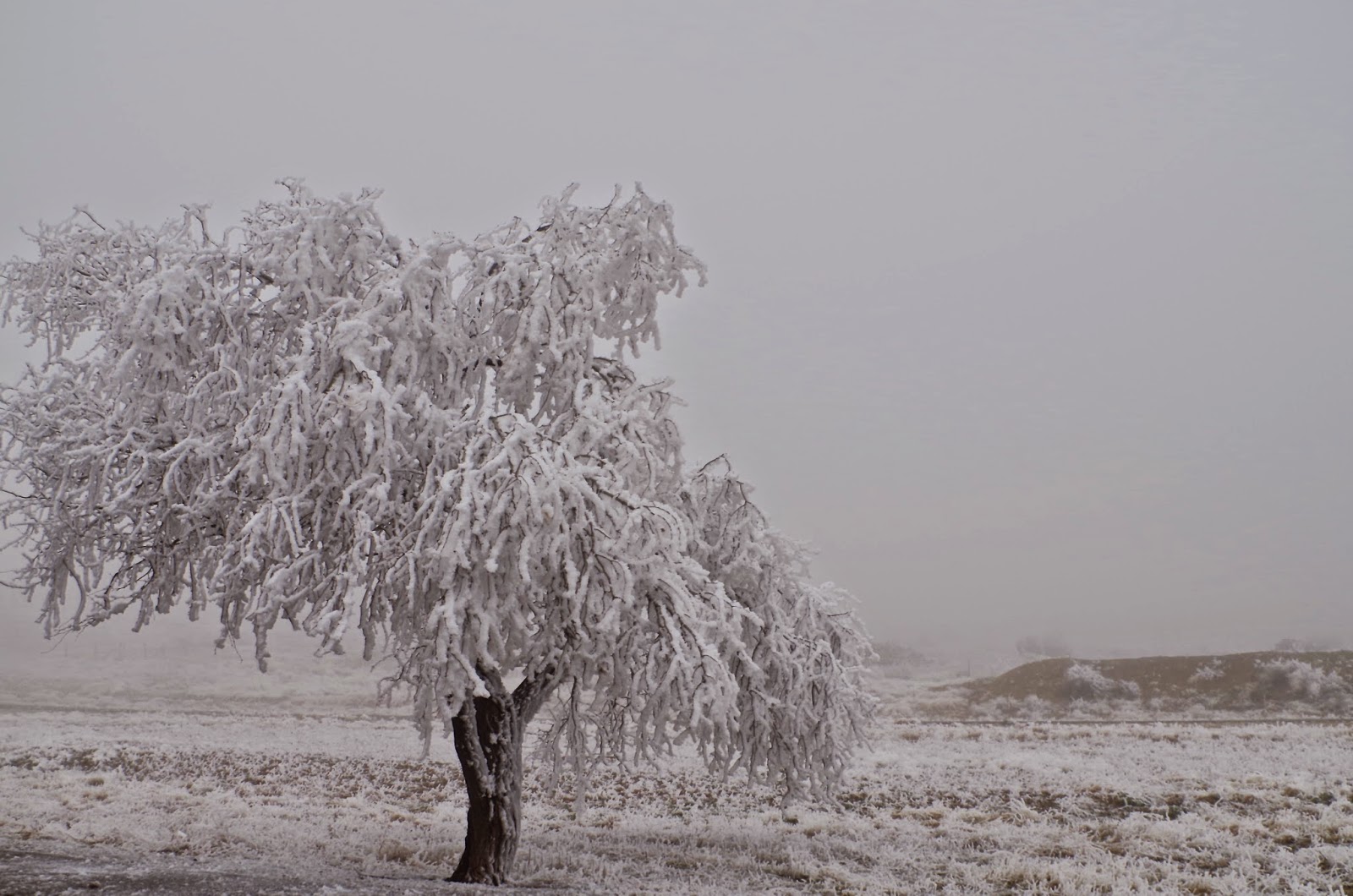 We decided to go ahead and leave the next day and head out to Las Crusas  NM, it turned out ok, but it took until almost mid afternoon before we hit "dry freeway".  That night rewarded us with a beautiful New Mexico sunset to help us forget the last harrowing days. 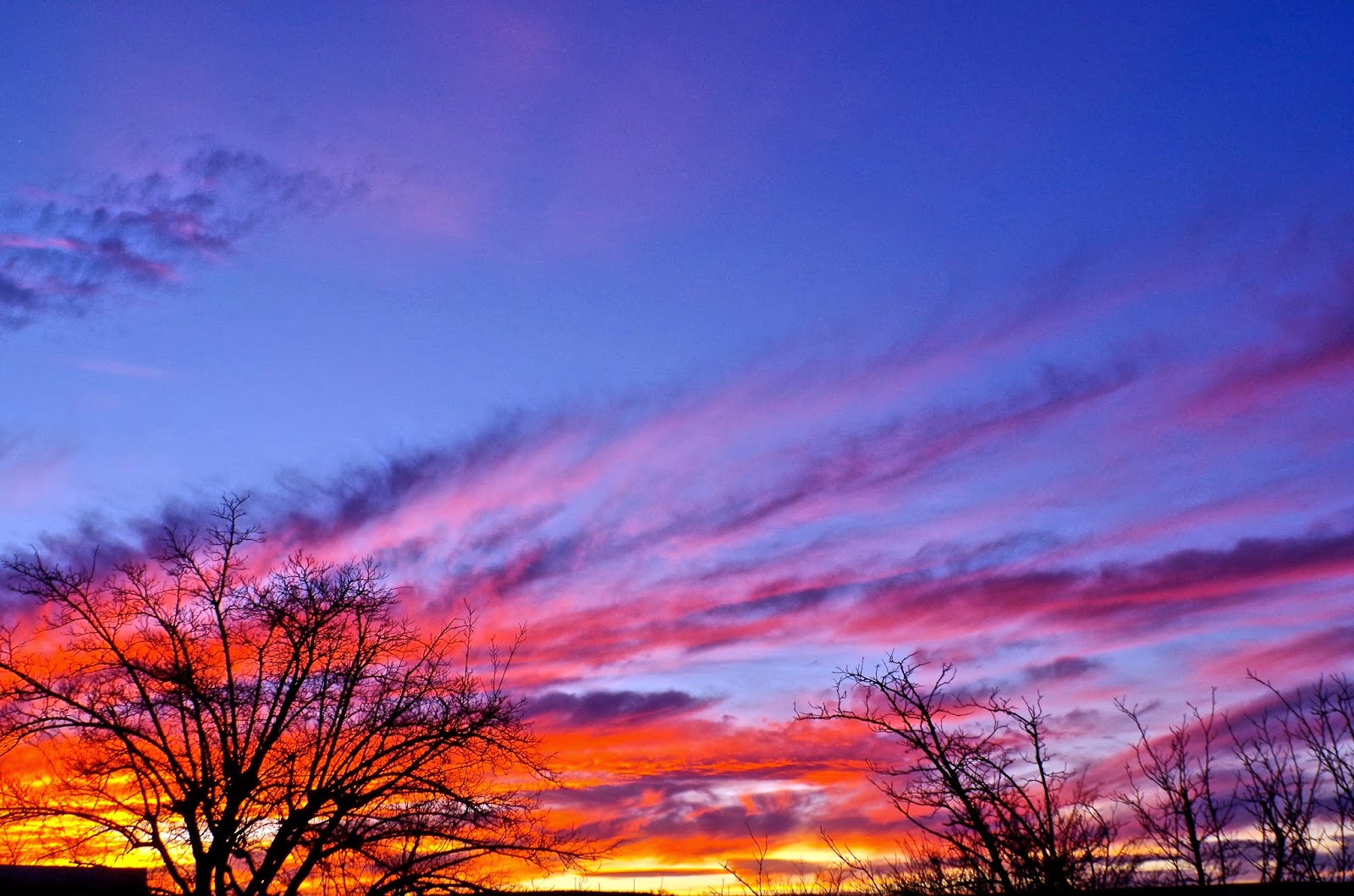 The following day, the Arizona sun was a welcome relief from all that cold.  It was to be a quick visit with our friends in Glendale, then on to Yuma for a couple of days, that's all.  That was the plan anyway.

We were all set to pull everything together, and I'm pushing the button for the last slide in...and guess what?  It doesn't come in...again!  Ugh.  This has happened once before, so we know what the problem is.  Jack tries to fix it, but no luck...and guess again, it's Sunday, no less.  That limits our options on getting a mechanic out to fix it.  Several phone calls later, and Ron's Mobile Service will try and make it out, but most probably it will be the next morning at 8:30.  So, we are stuck in Yuma another day.  We can't really go anywhere because "Ron" just might be able to make it...

Monday morning comes, and Ron shows up right at 8:30!  By 9:30 he's on his way again, and we are pulling everything back together and getting ourselves "outta here"!  I'm doing the final check, behind the rig, making sure the lights are working etc. and not looking at the ground (hey, the lights are up at the toad & the rig!) and don't see this guy's "decorative" bricks sticking out from his mobile unit, and trip over them.  Down I got, splat face first onto the tarmac!  Ouch!  Took the skin right off one of my hands, my knee and bruised up my leg and other hand pretty good too.  Nice.  So then spent the next half hour cleaning it up and bandaging myself.  Jeez, all I wanted to do was leave!

Sometimes the joys of "the road" is just finally arriving safe and sound where you were headed for in the first place!


...kicking back in California,  Marie