Spending time with friends is always a highlight along our journey, and visiting Ken and Sherrie in Calgary Canada is no exception.  We met this lovely couple several years ago when we were hanging out in Indio California for a month.  They were parked behind us and quickly became "fun friends".   When it was shared that I had always wanted to see the Calgary Stampede, and their daughter works for it, it was decided that "someday soon" we would make a trip to Canada for a visit!  We did indeed to do that in 2013 and enjoyed it and our visit very much!

Since then we have managed to meet up with our friends in California almost every year, this time, it was our turn to return to Canada to see them again!  Due to some time restrains with family in Washington, we only had a week together, but we managed to fill it with lots of food, fun and laughter...as usual.  ;-)

Ken grew up on a farm, and I put him to the test this time, having him teach us "what was all that growing in those fields?"  So, as we took a drive out to his old farm one day, he stopped at several fields, and we got out and...right into the fields we went!  First up, Canola!  Well, we had learned about Canola on our first trip to Canada, but had never gotten "up close and personal" with it...this time we did!  It's really pretty!  At least this time of the year.  It's flowering now, then it will grow 'seed pods' that will be harvested, and then pressed into oil...and that's what we all use!  Did you know that "Canola" stands for "Canadian Oil"?  Yep.  Next was the Barley field.  This was a surprise, because it was much flatter than I thought it would be...I would have guessed it was "wheat", instead.  Then, he took us to the "Bearded Wheat" field, it was "bumpy" with long strands sticking up (I guess that's the 'beard').  Both were still a bit green yet, so to early for harvesting.  They will turn a nice yellow to tan color and grow about another 6'' to 12'' depending on the rainfall.  This area had acres and acres and acres as far as you could see of these three types of grains.  They switch them around each season to help the soil out.  Ken said that unless the farmers have animals, once they harvest in the late fall, they usually "head south (USA) for the winter, since you can't do much planting in the snow!" 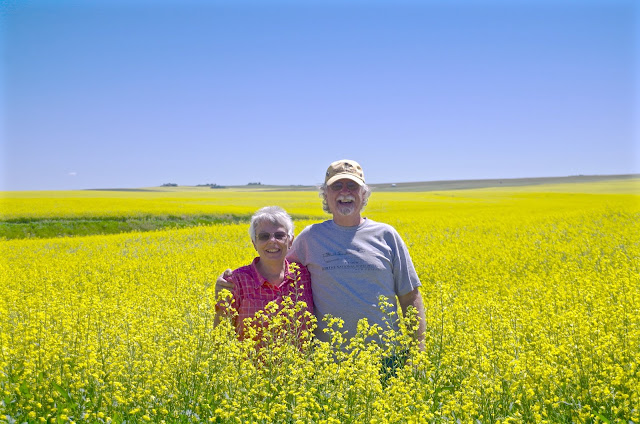 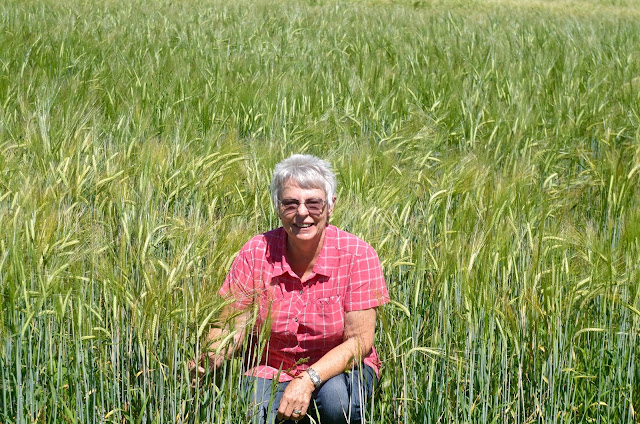 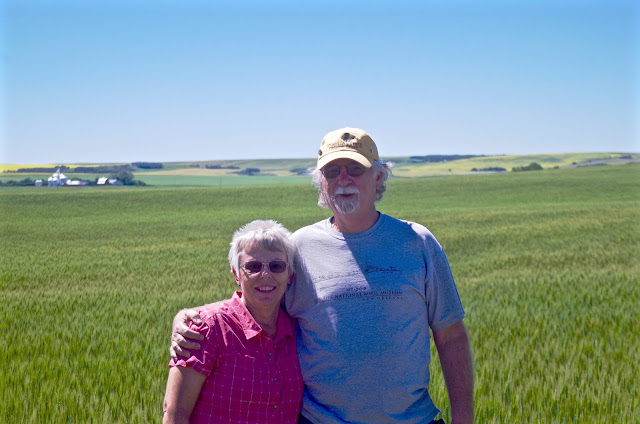 While we were out visiting the farm lands, we stopped in the tiny town of Torrington to see the "The World Famous Gopher Hole Museum".  What a hoot!  A little house filled with wooden cut-outs (gopher holes) that have stuffed gophers dressed up in various 'vignettes'.  My two favorites, of course, were the "Village Campground" and the "Blacksmith Shop".  I guess every small town has to have something to pull the tourists in.  While we were there, 10 other people came in!  Got to give them an "A" for imagination! 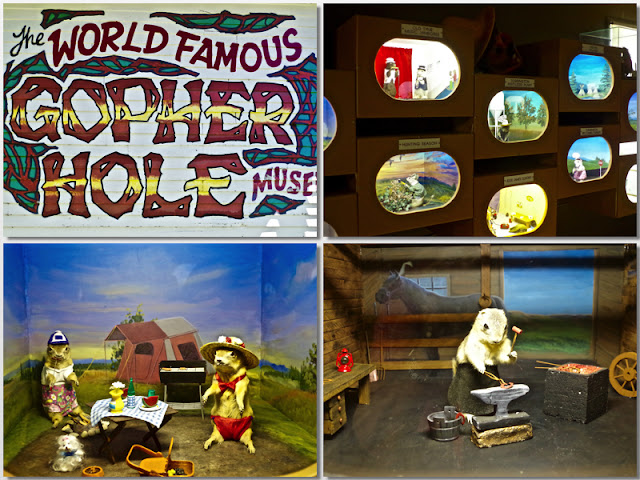 As a special treat, we all went to the Sky 360 at the Calgary Tower  downtown for dinner.  It's a lovely restaurant that sits one floor below the observation deck of The Tower, a 627' tall free standing structure built in 1967.  At that time, it was the tallest building in Calgary (not any longer tho).  The restaurant revolves slowly around 360 degrees in a hour so that you can see all of Calgary while you dine.  All the tables are next to the floor to ceiling windows.  It was lovely (and the food was wonderful!).  Afterward we went out on the observation deck as well.  Part of it has a glass floor so you can look straight down if you like, pretty cool (not for Sherrie tho!).  The sun doesn't set until almost 10PM in Calgary, so there still was plenty of time to walk around downtown and see some of the lovely sculptures and Olympic Park.  The coolest, I thought was "Wonderland" by Jaume Plensa, a 39' metal/wire female, shaped head in front of one of the most beautiful buildings in Calgary called The Bow.  Very sheik looking. I also liked sitting with some awesome ladies who, in the early 1900's, challenged the British Empire in various ways (1st female Senator, Social activists, Alberta's 1st female Cabinet Minister, Preeminent suffragist, orator and authors).  Pretty impressive, I'd say, I would have loved to have tea with any one of them!
On our last day together, our friends drove us out to Drumheller, which is the heart of the Badlands.  It looks so very different than anything else we'd seen around Alberta.  Gone were all the farmlands and the city, replaced by prairie and a large canyon.  Our first stop was at Horseshoe Canyon.  What a great sight.  The parking lot had very large"klinkers" bordering it that Jack was amazed at because "klinkers" are the waste products after coal has been turned into coke.  They get them in blacksmithing (very small ones, of course)...these were huge! 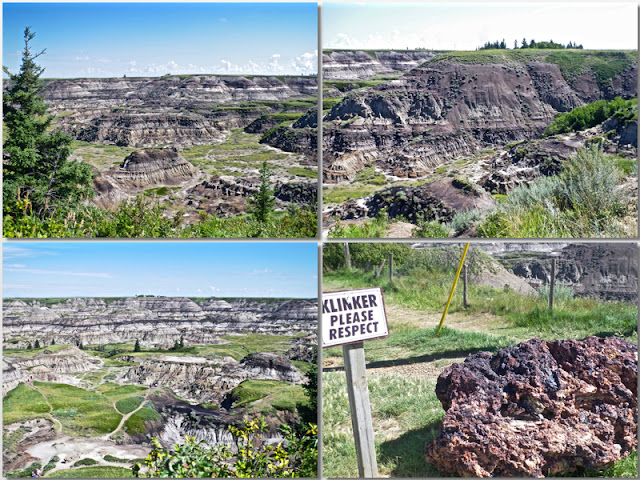 From there, we traveled on to The Royal Tyrrell Museum.  This is where the greatest diversity of dinosaur fossils in the world are found.  Divided into three areas, the exhibit features over 90 specimens chosen specifically to supplement the story of life on Earth.  This place was huge!  We could have spent an entire day there and still not encompassed it all.  So much to read and explore.  They even had a palaeontologist on site working on a piece so that you could talk directly with her.  Very nice.  My grandchildren would have LOVED this place!  They probably would still be there.  ha ha 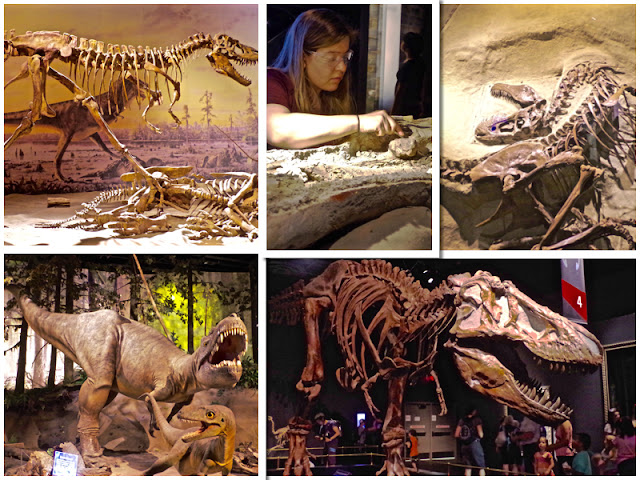 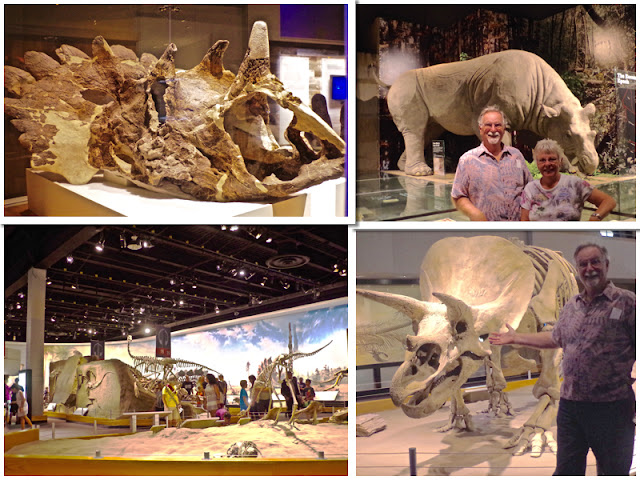 Like all good things, our trip came to an end...this time, but we will meet up again for more adventures!