We went to the tiny town of Medora North Dakota to visit the Theodore Roosevelt National Park and found so much more.  I love National Parks and have such a big spot in my heart for the people who had the foresight to have saved them for us.  Every time we visit one I'm reminded how very lucky we all are and wish that everyone can see and enjoy what I am seeing at that moment.  Each one is so very different from the other, it never ceases to amaze me.

When I told my husband that I wanted to take this trip across North Dakota to go see this National Park, he said "but we already saw the Badlands in South Dakota".  I explained that I had read that these were "different", and that I had read that according to President Roosevelt, "they were like no where else, and that they had changed his life".  That sounded beautiful to me, so I wanted to see them for myself.

The first day after arriving it threatened to rain, but that didn't stop me, I wanted to get out there and explore the Park, so off we went, lunch and camera in hand.  The President wasn't wrong.  Beautiful, and yes, very different from the Badlands in South Dakota!  For one thing, so much more greener!  That was my biggest surprise.  Different colors too, where the ones in South Dakota seem to have more yellows, pinks and white, here there seems to have more grays & blues mixed in.  They also seemed more rounded and less jagged than the ones in South Dakota.  We also saw more animals here too.  Besides the ever present prairie dogs and occasional bison, this time we lucked out and saw a few elk and some magnificent wild horses! 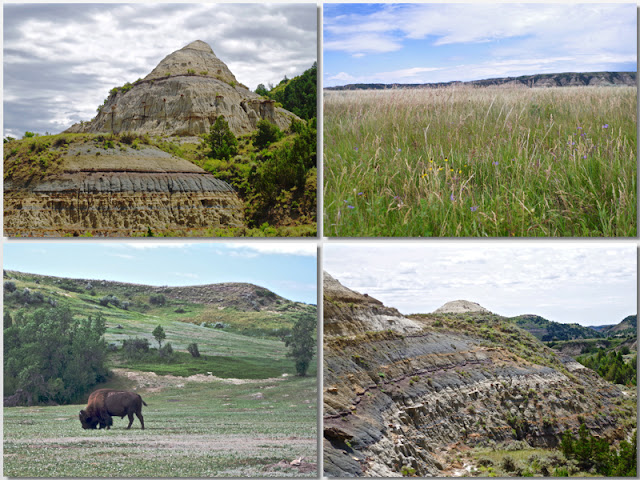 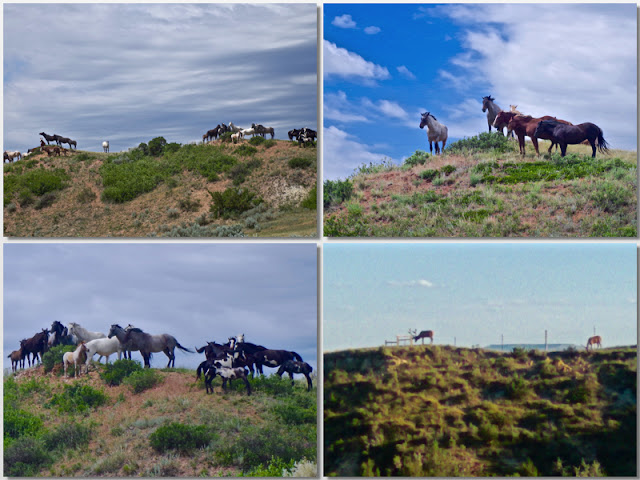 Nothing was left of Teddy Roosevelt's Ranch but his Maltese Cross Cabin, which they have moved to the Ranger Station along with some artifacts that were left behind, so they are on view.  He only used the cabin for a year (1883-84) before he built the Elkhorn Ranch that he used until 1901 when he became President. 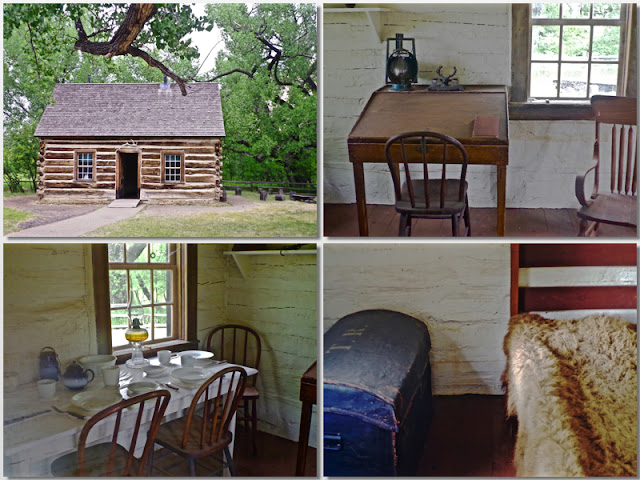 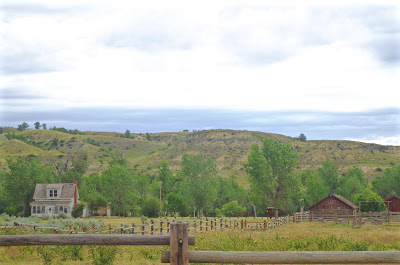 Another abandoned ranch in the Park is the Peaceful Valley Ranch (c1918).  It was first operated as a dude ranch then later in 1936 the CCC took it over until 1947 when it was then used for Park Administration until 1959 when it was used as a horse riding concession until it closed in 1967.  The sign said that the Park will begin to restore it for historical purposes.  Nice look into the past... 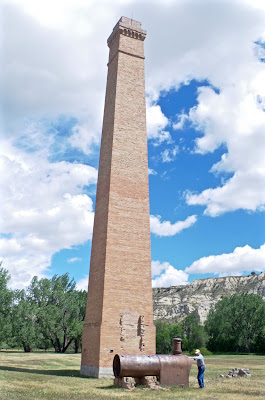 This part of North Dakota lured another famous person besides Teddy Roosevelt here, a gentleman by the name of Marquis de Mores and his wife Medora.  He so loved the area, in 1880 he built a 26 room summer house (hunting cabin to him - "Chateau" to the towns' people) and set upon starting a number of enterprises.  His first, and biggest was running a beef-packing plant that included refrigerated railway cars, cattle and sheep ranching.  He also added a stagecoach line...all before they failed and eventually he and his family returned to France.

His home and furnishings are on display along with several other items, but only the 84' tall chimney and a few bricks are left of the beef-packing plant.  He was ahead of his time I'm afraid.  He and his wife were quite a pair though, it would have been quite something to have met them I bet!  Can you just imagine a dinner with them and Teddy Roosevelt, what conversation that would have been? 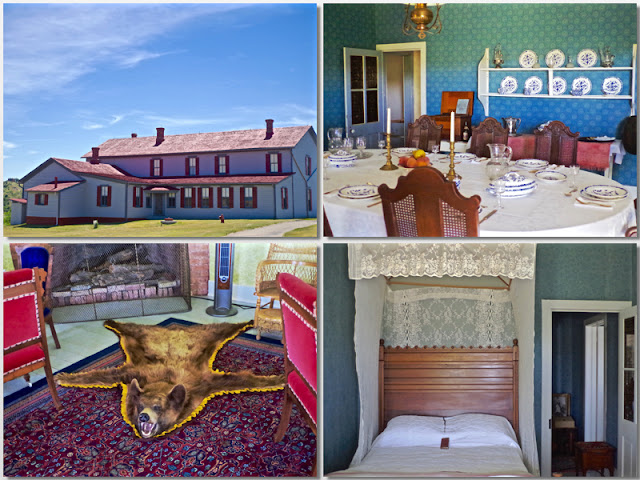 Medora doesn't stop with those attractions (nor the tons of gift shops in town!).  They have a wonderful musical that they put on at their Burning Hills Amphitheatre.  You can add dinner to you evening as well...which we did.  They have two buffets to choose from, Jack chose the chicken/ribs/roast, while I went for the "Pitchfork Steak Fondue"!  Wow!  It was worth it just to watch them stick those suckers in the large vats and cook them!  Of course it comes with a ton of other stuff so that you ache when you walk out of there and over to the Burning Hills Amphitheatre. 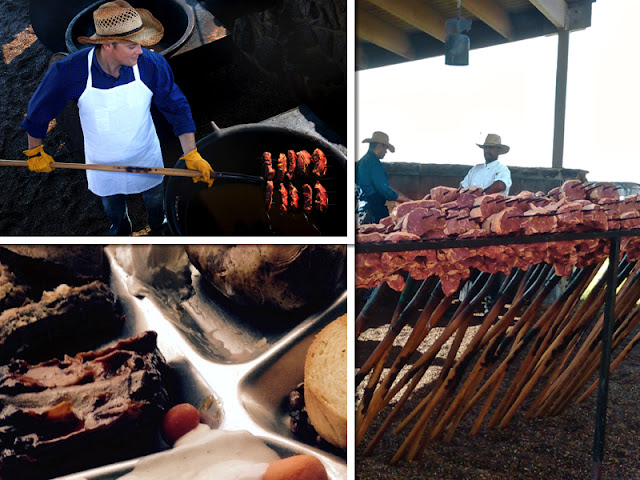 The Medora Musical is about two hours and was top quality.  It had 6 gals and 6 guys and a young man, Chet Wollan, who was the host/singer/dancer, that had made his first debut with the show at 4 years old.  It is his first year as host, but you sure could see his love of the show and his talent!  The previous host, who had been with the show for many years, had recently past away.  They change the theme each year, and this year's was a little bit about him, and a lot about our National Parks.  It even had a spot where they brought all the children up on stage and had them take an oath to help continue the Parks (and gave each one a button).  Very cute. It was a truly a very entertaining evening. 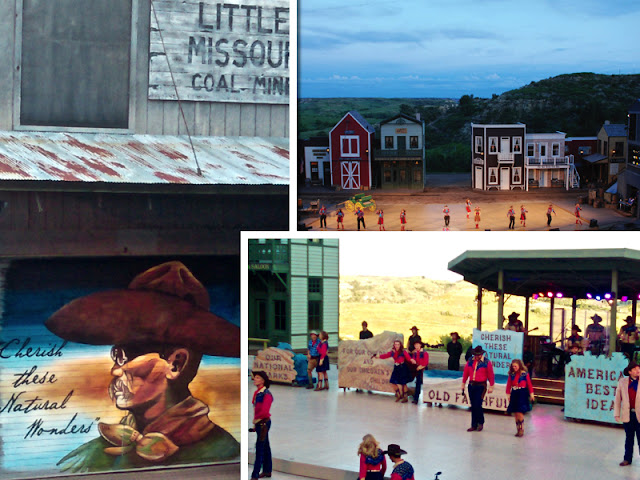 We only stayed three days in Medora as we have a tight schedule to meet up with some friends.  One more day and we would have driven up to the north end of the Park...that takes a full day.  It's hard to tell if it's much different from the south end from the map.  Something for another time...

For now, I'm so glad we made the trip!  Goodbye North Dakota...and thank you President Roosevelt!