We finally made it to North Dakota, you betcha!

With only a couple more states left on our US map to go, filling up the spot for North Dakota was a primary goal of mine this year, and by golly, we finally made it!

We had three locations we wanted to visit...Fargo (had to see "The Chipper"!), Bismark (might as well go see another Capitol) and the saving the best for last, a few days exploring the Theodore Roosevelt National Park outside of Medora.

So, first stop, Fargo!  The folks at the Fargo-Moorehead Welcome Center were just wonderful.  So much fun.  You could see that they were used to people coming there to see "The Chipper" and take pictures, ask questions, etc.  They even have a box full of various "North Dakota winter hats" to offer you while they take your picture (assuring you that they have them cleaned frequently).  We had ours taken, but didn't even think about getting silly with it, until after we left (darn!).  The "Grip" from the Fargo movie sold them The Chipper (he had bought it after the movie finished for his hobby farm) and then donated his collection of memorabilia as well.  That made it really nice for the Welcome Center to have all that for all the visitors that come through there.  They even had a bench with a sign that said "Is this your last state?  Welcome to the club!"   I sooo wanted to sit there, but dang it, we still have ONE state left to go!  So, no picture on the bench... 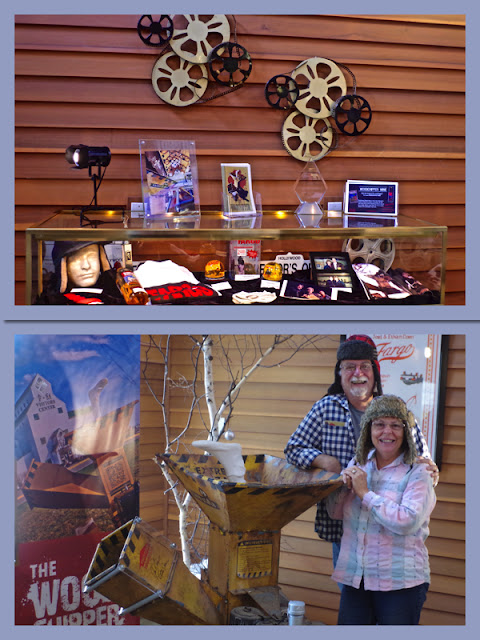 Outside, they created a "Walk of Fame" where they transplanted (from downtown) cement squares of hand & footprints and signatures of famous people from North Dakota...like Garth Brooks, Jimmy Dean, Bill Gates, Dr. Ruth, Zig Zigler, etc.  Kind of cool. 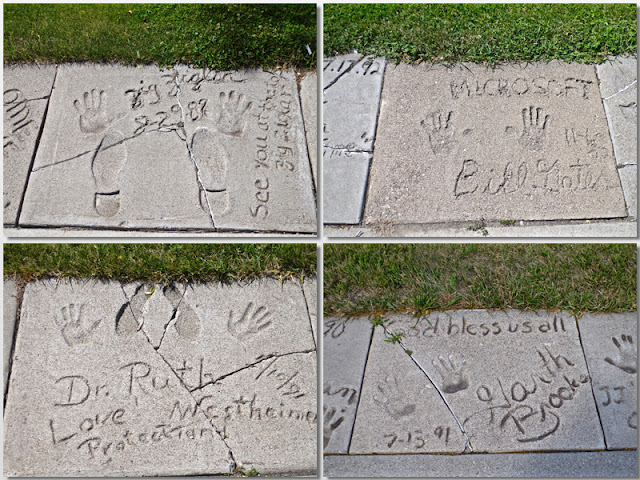 Afterwards we went to the Hjemkomst Center where we had read about how this gentleman had built almost entirely by himself, a sailing replica of an ancient Viking ship.  Wow, when you walk in, you look almost straight up, as it is 77' tall (63′ mast) and 30′ x 38′ long.  She was beautiful! 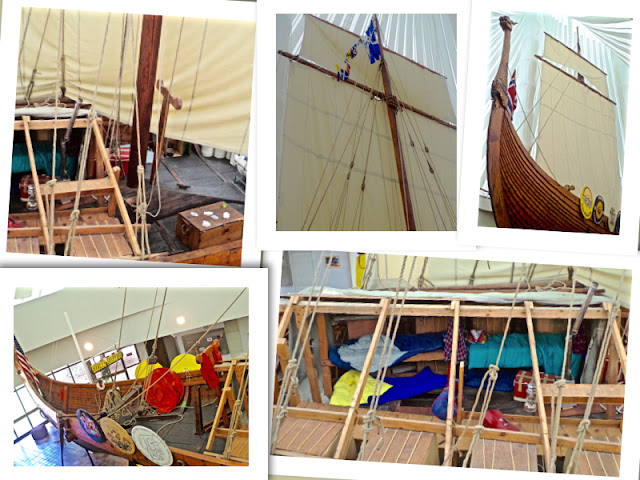 Bob Asp had a dream.  He thought it would take him a year...it took him nearly six.  He was a junior high school guidance counselor and he could only work on it during the weekends and summers.  Early on, he was diagnosed with leukemia, but that didn't stop him, he kept going, determined.

Bob was able to see his dream completed and was able to be on it's maiden voyage, under her own power, in the Duluth Harbor on August 9, 1980.  Although Bob died on December 27, 1980, his family was committed to keeping his dream of sailing the Hjemkomst to Norway alive.  On August 9, 1982, the Hjemkomst reached Oslo, Norway, her final destination-the destination dreamed of by her creator and builder, Robert Asp. Bob’s dream had been fulfilled.

What a story, what an incredible man, family, and ship.

The museum was "all things Scandinavian.  The other "Wow factor" was a full-size replica Norwegian Stave Church.  One of the volunteers there gave us a nice tour of the Hopperstad Stave Church.  We had seen other Stave Churches before, but no one had ever walked us through one and explained all the little details to us, which was really nice.  The gentleman who built this for them was very careful in all the special touches and nuances.  My favorite was the little window (Ambulatory) by the alter...it was for the sick...it afforded the priest to offer communion to the lepers or other sick, without actually touching them or even getting near them.  Huh... 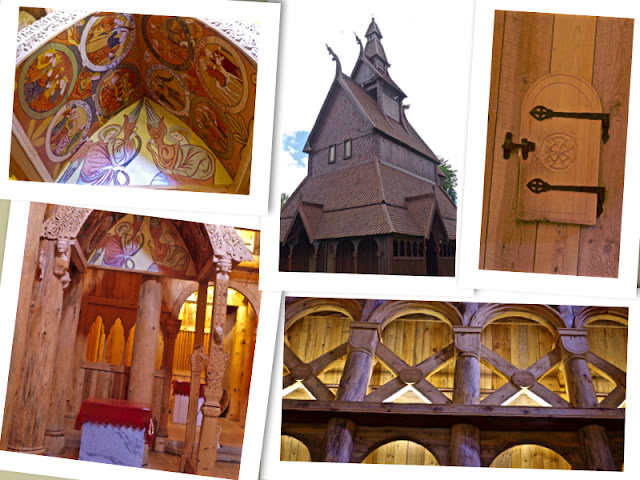 After we left Fargo, it was off to see the capitol of North Dakota!  We've enjoyed seeing the various capitol buildings and have even gone out of our way to include them in our journeys now.  So, we thought Bismark would be a great place to spend the Independence Holiday weekend!  Right?  well...not so much...

The best thing I can say about Bismark...is that it's an unusual town.   It's nothing like I expected, that's for sure, starting with it's Capitol.  Every State Capitol building we've been to has had a "rotunda".  They all have been lovely, some more than others and one was absolutely gorgeous.  This one, however...was a 21 story tower.  When we were given our tour, I asked "why no rotunda?" and was told that "rotundas are wasted space, and this was built for efficiency".  They not only house their political offices here, but many other government agencies as well. The first Capitol building, built in 1883, burned to the ground in 1930,  forcing them to build a completely new building. Built in the 1930's, during the Great Depression, they chose function and simplicity.  Inside, they went with an Art Deco style and with 19 stories expected to have plenty of space for years to come, but more space was needed by 1955 when construction was begun for the State Office Building.  In 1968 the Dept. of Transportation building was added and the Judicial Wing was added onto the base of the Capitol tower in 1977.  Even with all this, she shared that not all the legislators have offices and have to share "open spaces". 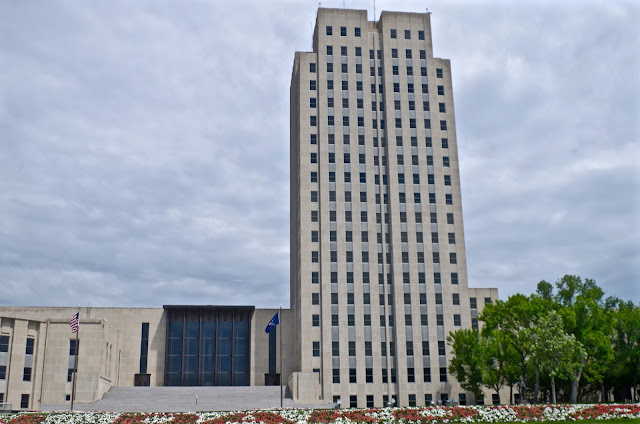 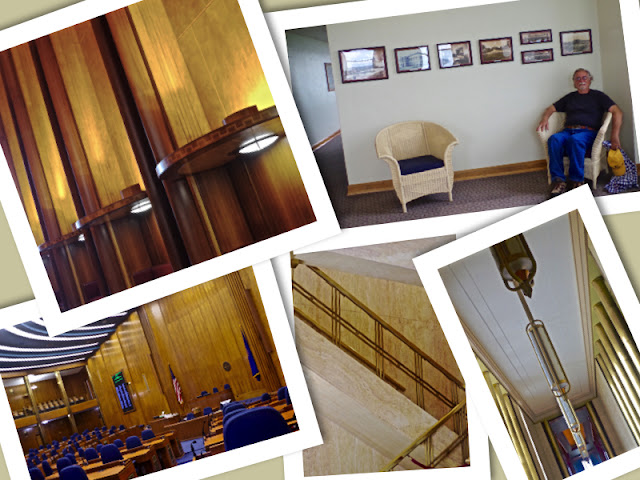 The 18th floor was a nice observation floor with windows showing great views of the city below.  They had some wonderful old pictures of the first Capitol building and even while it was burning.  They had beautiful old wicker furniture that had been hand made by patients in the state mental hospital back in the 1930's. 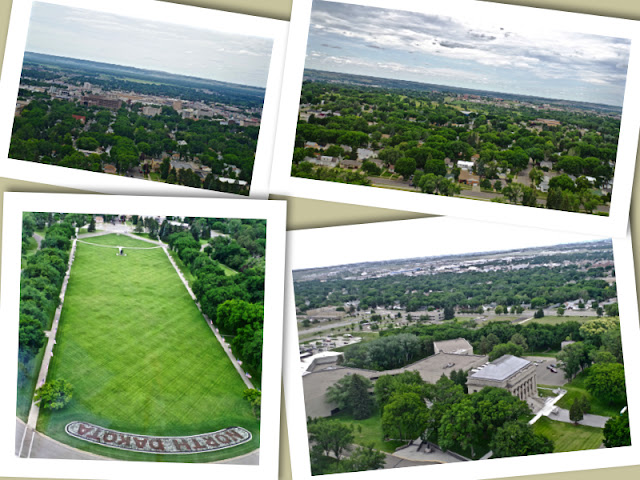 Back on the ground floor, they too have a "Hall of Fame".  North Dakota is sure proud of the people that are either from here, or have lived here!  ;-)  Here, they put up large oil paintings with very nice plaques telling you all about each of them.  Their group was quite long.  Of course it had at the very beginning, Teddy Roosevelt, but it also had such greats as Angie Dickinson and Louis L'Amour, and even Eric Sevareid. 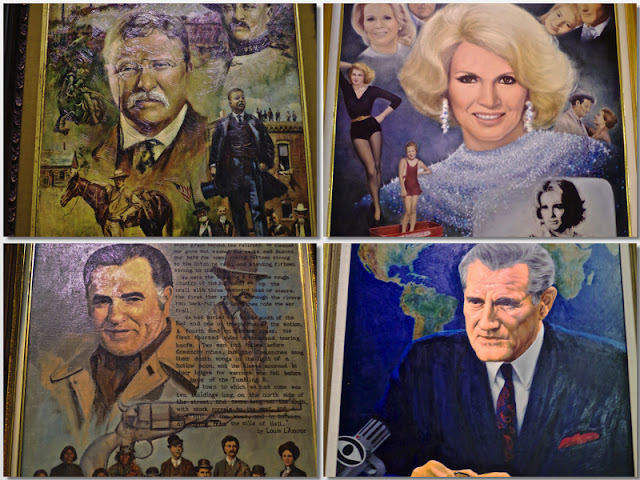 Being in Bismark over the holiday was an experience in itself...  It started with our campground.  I'd say that we've really had pretty good luck with campgrounds over the 4+ years of being on the road.  Friendly staff, friendly people, nice surroundings usually.  When holidays come around, some celebrate a lot, some only a little.  Either way, it's okay with us.  Well, when I arrived here, the hostess didn't greet me, she actually didn't say anything to me until I finally asked her about the weather!  I chalked it up to her just being "quiet".   She didn't even tell me our site #, just said "follow me".  I never saw her again.  Two days later, Jack doing laundry, had his shirt off because it was 95 degrees, stopped in the office to ask her for change, she walked in and said "you can't come in here without a shirt" and turned around and walked back out.  That was it.

Next door was a fireworks sales tent.  Every night they (or someone near there, as I couldn't actually see the fireworks) set fireworks off from about 9:30pm until about 2am or later.  On the 4th, lots of people set off fireworks...that I expected and could actually see some, and ended around 1am.  But all those other nights was a bit much...ugh.  No sleep for me all week...

The other odd thing was the rodeo...we saw a big billboard advertising it and thought that would be fun to go see!  So, went on the web and looked it up.  Great web, lots of pictures, said it was in Mandan (the town right next door), that it was $18.  Nothing more...not it's actual location, what time, etc.  Jack read in the local paper that they were having a pancake breakfast on Sunday, so we thought, great, we'll go to that, then we'll head over to the fair & rodeo!  So, with little sleep from the night before, we got up anyway, headed out and figured out that since Mandan was small, we'd see signs pointing us to the "fair".  Well, we found our way...but no signs...and everything was closed.  Nothing said anything about the breakfast, or the rodeo.  Hmmm.  Well, we found a cafe nearby, Kroll's Diner, and stopped in for breakfast.  After a great breakfast, we asked the waitress about the rodeo, she said "oh, it's wonderful, it starts at 7:30pm".  "Oh...what about the fair?" I asked, "well", she said, "there is "Art in the Park" and gave us directions to that, and "the carnival?" and gave us directions to that...all three things in different areas!  Funny.  We went to the Art in the Park, which was nice, laughed about what they called a carnival, which was about 10 little rides and then went home.  A nasty storm came in late that afternoon and just poured rain like crazy all evening.  I felt sorry for anyone who had pre-purchased their tickets for the rodeo (or maybe they cancelled and made good for the next night).

We did drive around their River Drive and checked out their "Eagle Sculptures", then stopped off at the local Dairy Queen for a burger...and they give you a free Sunday with it!  Almost made up for all the rest...almost... 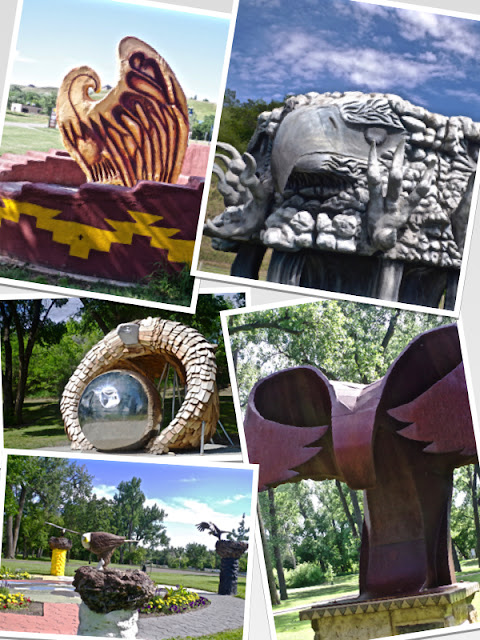 Looking forward to our trip to Theodore Roosevelt National Park, that should be special...

...on the road in North Dakota,  Marie